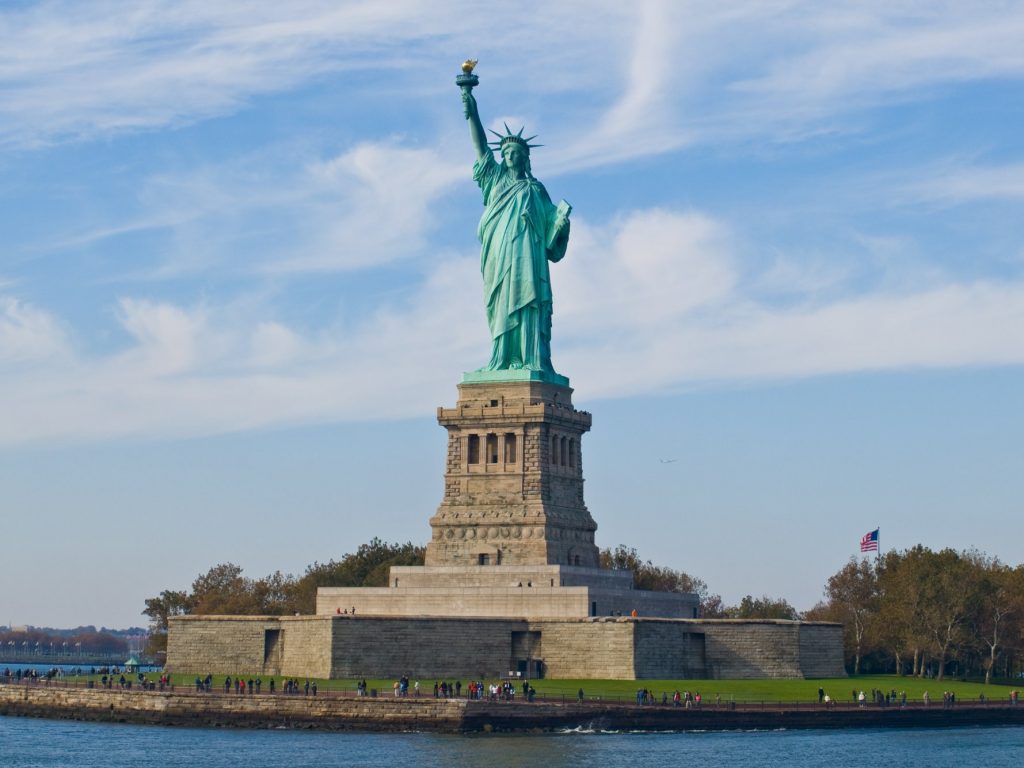 What to eat in New York, Usa

New York has, as you might expect of the Big Apple, all the eating options covered and you can find almost every type of food available and every cuisine of the world represented. There are tens of thousands of restaurants to suit all tastes and budgets, ranging from dingy a-slice pizza joints to a plate prix fixe sushi and exclusive Michelin-starred eateries. Thousands of delis, bodegas, and grocery stores dot every corner of the city and DIY meals are easy and cheap to find. Street food comes in various tastes, ranging from the ubiquitous New York hot dog vendors to the many carts with Middle Eastern cuisine on street corners in mid-town. It pays to be adventurous therefore and reach out into the individual neighborhoods for a true authentic NYC dining experience!

Fruit stalls appear at many intersections from spring to fall with ready to eat strawberries, bananas, apples, etc. available at very low cost. Vegetarians will find New York to be a paradise with hundreds of vegetarian-only restaurants and good veggie options in even the most expensive places.

The New York Bagel. There is no bagel like the New York Bagel anywhere else in the world. Bagels, which are a doughnut-shaped round of boiled dough with a distinctive, chewy, sweet interior and a leathery outer crust, arrived from the old world with Jewish immigrants from Eastern Europe and have become utterly New York in character. You can get bagels anywhere in the city but, for the best bagels you may have to trek away from the main tourist sites.

The Bialy. There’s also a little-known cousin to the bagel, the bialy, which is like a bagel but the hole does not go all the way through, and topped with lightly caramelized onions.

The New York Hot Dog. Vendors all over the city sell hot dogs – affectionately called “dirty water dogs” by the locals – from pushcarts on city sidewalks and in parks. Choose your toppings from mustard, ketchup, and relish (or just ask for everything), wrap the dog in a paper napkin, and walk along the sidewalk trying not to let the toppings slip and slide all over your hands.

The New York Deli Sandwich. Another delicacy brought over by Jewish Immigrants, you must try either a corned beef or pastrami sandwich (a “Reuben” is always a good choice).

The New York Pizza. A peculiarly New York thing, you can buy pizza, with a variety of toppings, by the slice from almost every pizzeria in the city. A New York pizza has a thin crust (sometimes chewy, sometimes crisp), plenty of cheese, and an artery-hardening sheen of grease on top. Buy a slice, fold in half lengthwise, and enjoy. If you just want a piece of plain cheese pizza, ask for “a slice.” Or pick up one with pepperoni – the quintessential meal on the go in New York.

The New York Cheesecake. Made famous by Lindy’s and Junior’s deli in New York, it relies upon heavy cream, cream cheese, eggs and egg yolks to add a richness and a smooth consistency. Now available throughout the city.

The New York Egg Cream. Also often referred to as a “Chocolate Egg Cream”. A blend of chocolate syrup, milk, and seltzer water. Though not often on the menu at many diners, if you ask for one they will still prepare it for you at most locations.

The New York Falafel and Gyro. You can find gyro vendors scattered throughout the city.  Don’t forget to try out their hot sauce and to bring cash.

Maybe it’s the size of New Yorkers’ tiny kitchens, or perhaps it’s the enormous melting-pot immigrant populations, but either way, this city excels at every kind of restaurant. There are fancy famous-chef restaurants, all ethnic cuisines and fusion/updates of ethnic cuisines (second-generation immigrants tweaking their family tradition), plus all the fashionable spots, casual bistros, lounges for drinking and noshing and more.

While most restaurants accept credit cards, some smaller restaurants, particularly in Chinatown and Williamsburg, do not. Others have required minimum purchase amounts for credit/debit purchases. Most establishments will prominently display this requirement, so keep your eyes open if you typically pay for meals with plastic.

Restaurants with meal courses under $20 are unlikely to have any preference about what their customers wear. Of course, like most major cities, New York has some expensive, extremely fashionable restaurants that care about, and enforce, a certain level of dress among their customers – but “jackets only” restaurants are very uncommon nowadays.

New York is a friendly place for vegetarians and vegans. There are many vegetarian only restaurants with offerings varying from macrobiotic food to Ayurvedic thalis or Asian Buddhist food. But, more importantly, almost every restaurant at every point on the price scale has vegetarian dishes that are more than an afterthought. DIY vegetarians will have no problem finding fresh vegetables, a wide variety of cheese, bread and prepared vegetarian foods in New York supermarkets.

New York’s many markets and grocery stores make preparing your own food interesting and easy. Almost every grocery store, deli, or bodega has a prepared foods section where you can make your own salad (beware, you are charged by the pound!) or buy ready to eat foods such as burritos, tacos, curries and rice, lasagna, pastas, pre-prepared or freshly-made sandwiches, and many other types of foods. Whole Foods has five New York City locations, all with a variety of foods, and a clean place to sit and eat but any supermarket will have enough to take away to the park or your hotel room for a low cost meal. If you have a place to cook, you’ll find almost any kind of food in New York though you may have to travel to the outer boroughs for ethnic ingredients. Most supermarkets have Thai, Chinese, and Indian sauces to add flavor to your pot, and many, especially in upper Manhattan, have the ingredients necessary for a Mexican or Central American meal, but go to Chinatown for the best Chinese ingredients, Little India in Murray Hill for Indian ingredients, Flushing for all things Chinese or Korean, Jackson Heights for Peruvian, Ecuadorian, and Indian, Flatbush and Crown Heights for Jamaican, Williamsburg for Kosher, Greenpoint for Polish, or Brighton Beach for Russian & Eastern European. Ask around for where you can get your favorite ethnic ingredients and you’ll find traveling around in local neighborhoods a rewarding experience. Western Beef Supermarkets offer more foods from different ethnicities than average supermarkets.