Where to go for Hanukkah 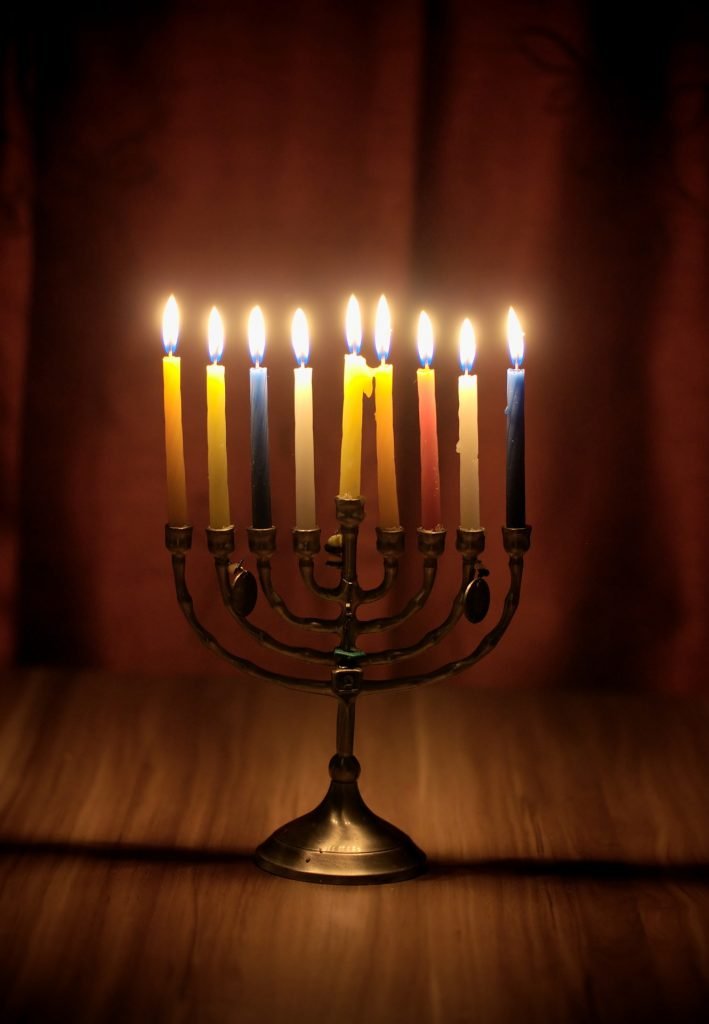 Hanukkah is the Jewish Festival of Lights and it remembers the rededication of the second Jewish Temple in Jerusalem, in Israel. This happened in the 160s BCE/BC (before Jesus was born). (Hanukkah is the Hebrew and Aramaic word for ‘dedication’.) Hanukkah lasts for eight days and starts on the 25th of Kislev, the month in the Jewish calendar that occurs at about the same time as December. Because the Jewish calendar is lunar (it uses the moon for its dates), Kislev can happen from late November to late December.

During Hanukkah, on each of the eight nights, a candle is lit in a special menorah (candelabra) called a ‘hanukkiyah’. There is a special ninth candle called the ‘shammash’ or servant candle which is used to light the other candles. The shammash is often in the center of the other candles and has a higher position. On the first night one candle is lit, on the second night, two are lit until all are lit on the eighth and final night of the festival. Traditionally they are lit from left to right. A special blessing, thanking God, is said before or after lighting the candles and a special Jewish hymn is often sung. The menorah is put in the front window of houses so people passing can see the lights and remember the story of Hanukkah. Most Jewish families and households have a special menorah and celebrate Hanukkah.

Hanukkah is also a time for giving and receiving presents and gifts are often given on each night. Lots of games are played during the time of Hanukkah. The most popular is ‘dreidel’ (Yiddish) or ‘sivivon’ (Hebrew). It’s a four sided top with a Hebrew letter on each side. The four letters are the first letter of the phrase ‘Nes Gadol Hayah Sham’ which means ‘A great miracle happened there’ (in Israel, ‘there’ is changed to ‘here’ so it’s ‘Nes Gadol Hayah Po’). Each player put a coin, nut or chocolate coin in a pot and the top is spun. If the letter is ‘nun’ (נ) come up nothing happens, if it’s ‘gimel’ (ג) the player wins the pot, if it’s ‘hay’ (ה) you win half the pot and if it’s ‘shin’ (for ‘there’ ש) or ‘pe’ (for ‘here’ פ) you have to put another item into the pot and the next person has a spin!

Food fried in oil is traditionally eaten during Hanukkah. Favorites are ‘latkes’ – potato pancakes and ‘sufganiyot’ – deep friend doughnuts that are then filled with jam/jelly and sprinkled with sugar.

The Story behind Hanukkah

About 200 BCE/BC Israel was a state in the Seleucid Empire (an empire ruled under Greek law) and under the overall charge of the King of Syria. However, they could follow their own religion and its practices. In 171 BCE/BC, There was a new King called Antiochus IV, who also called himself Antiochus Epiphanes which means ‘Antiochus the visible god’. Antiochus wanted all the empire to follow Greek ways of life and the Greek religion with all its gods. Some of the Jews wanted to be more Greek, but most wanted to stay Jewish.

On his way home from having to retreat from a battle, Antiochus stopped in Jerusalem and he let out all his anger on the city and the Jewish people. He ordered houses to be burned down and tens of thousands of Jews were killed or put into slavery. Antiochus then went to attack the Jewish Temple, the most important building in Israel to Jews. The Syrian soldiers took all the treasures out of the temple and on 15 Kislev 168 BCE/BC Antiochus put up a status of the Greek god Zeus in the center of the Jewish Temple (but it had the face of Antiochus!). Then on 25 Kislev he desecrated the most holy place in the temple and destroyed the Jewish holy scrolls.

Antiochus then banned practicing the Jewish faith & religion (if you were found out you and all your family were killed) and made the Temple into a shrine to Zeus. There were many Jews killed for their faith. Soon afterwards a Jewish rebellion started.

It began when a ‘former’ Jewish Priest, called Mattathias, was forced to make an offering to Zeus in his village. He refused to do so and killed a Syrian Soldier! Mattathias’s sons joined him and killed the other soldiers in the village. Mattathias was an old man and died soon after this, but his son Judah then took charge of the freedom fighters. Judah’s nickname was ‘Maccabee’ which come from the Hebrew word for hammer. He and his troops lived in caves and fought an undercover war for three years. They then met the Syrians in open battle and defeated them.

When they got back to Jerusalem, the Temple was in ruins and the statue of Zeus/Antiochus was still standing. They cleaned the Temple. They rebuilt the Jewish altar and on 25 Kislev 165 BCE/BC, exactly three years after the statue was put up, the altar and Temple were rededicated to God.

There are several theories about why Hanukkah is celebrated over eight nights. One legend says that when Judah and his followers went into the Temple there was only enough oil to burn for one night, but that it burned for eight nights. Another story says that they found eight iron spears and put candles of them and used them for lighting in the Temple.

Hanukkah is when families get together. It is a great bonding opportunity, as you eat, have fun and play games together.

If all the members of a  family live in the same city there is no problem and if they don’t again no problem; because you can find at us tickets for any destination  so as to be close to your family / loved ones. If need to rent a vehicle or find a hotel we can also help with that.

If you decide to travel book your hotel and your flight / train / bus at the best price.

Whether you stay at home or whether you choose to travel, ultimately it is simply about being together!

Let us know what you decided and where you celebrated Hanukkah ’this year in the comments below!

What ever you do and where ever you go we wish you a happy Hanukkah!