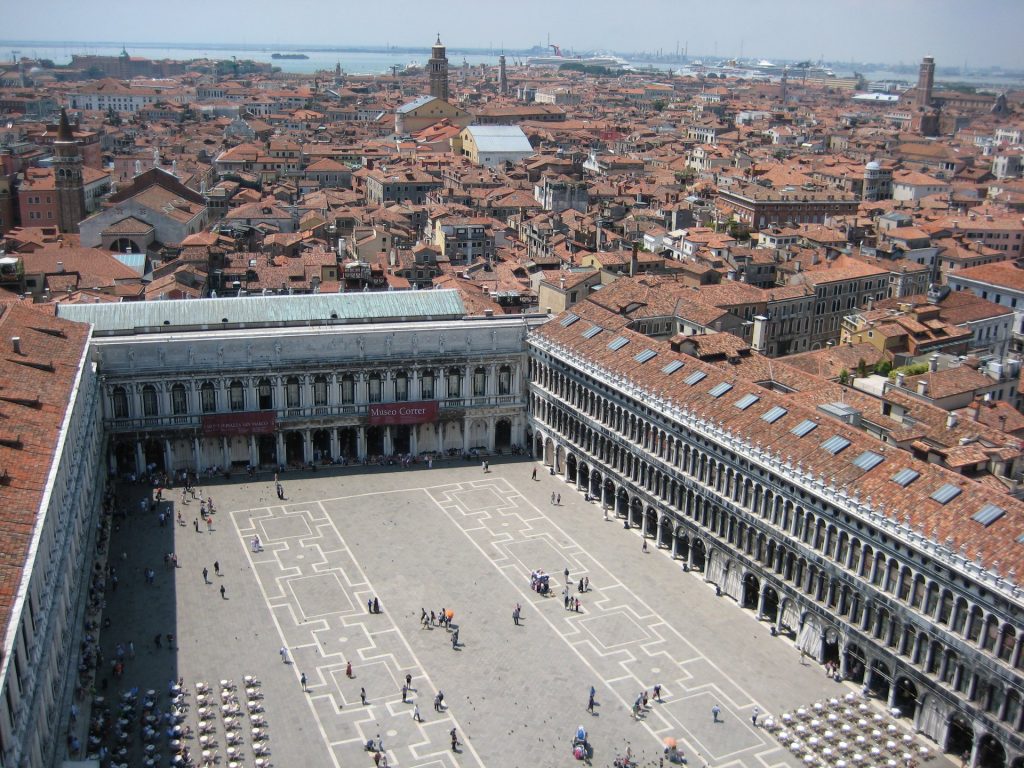 What to do in Venice, Italy

Voga Longa, the yearly equivalent of a marathon run on water. Voga Longa competitors must row 32 kilometers under 3.5 hours to receive a certificate of attendance at the finish line, but everybody with a human-powered vessel is welcome to participate (some foreigner teams take up to 10 hours to complete the journey just for the fun of it).

The official purpose of the Voga Longa was to protest the sharply increasing use of powerboats in Venice, but the event has gradually grown into a festival since 1974, with up to 5500 racers in 1500 vessels attending by the early 2000s. The racetrack visits different parts of Venice as well as some of the nearby islands. Locals and tourists lining up alongside Rios and canals cheer the racers.

Visitors wishing to participate should have serious experience in rowing or sculling and practice duely, as the journey is physically demanding (even seasoned oarsmen develop calluses by the finish line). The event is mainly for teams, completing Voga Longa on a single oar is considered a major achievement. Extreme participation (scuba frogmen and surface swimmers) sometimes occurs, but it is not recommended due to water contamination issues.

Regata ‘Storica.  (Historic fleet event) is held on the first Sunday of every September. Celebrating a historic event from 1489, the regatta displays almost a hundred varieties of Venetian boats from the city’s rich past. Large oar ships, replicating ancient roman and medieval vessels, are rowed along the Canal Grande, followed by many smaller boats. There are several races, including a master championship for solo sculling in streamlined gondolini, painted in unusual white, pink, etc. colors. There are many excellent photo opportunities for this event.

La Biennale di Venezia is one of the most well-known culture institutions. Two events organised by Biennale are the Art and Architecture International Exhibitions happening alternately (Architecture Biennale in even years, Art Biennale in odd) but other fields are also covered – contemporary theatre, dance, music and cinema.

Venice International Film Festival – 71st edition, from 27th August to 6th September 2014, will take place as usual in the island of Lido di Venezia. This is the oldest film festival of the world. Screenings will take place at Palazzo del Cinema on Lungomare Marconi and other nearby places such as the Venice Casino.

Carnival of Venice is one of the most popular carnivals of the world. First organized in 1926, it has been revived from the 1980s to become a major destination for people wearing masks and costumes from any kind of era. ‘Traditional’ (i.e. pre-19th century styles) can be seen right next to anything that takes your fancy, be it self-styled dresses, steampunk or outfits modeled on fiction or manga templates. The original fascination of carnival came from people being hidden behind their masks, allowing them to cross social boundaries and disregard social norms for some time.

Festa del Redentore (Feast of the Redeemer) is held on the third Sunday of July. It commemorates the end of the plague in Venice in 1577. The feast is mostly known for the fireworks display which begins on Saturday night at 10pm which is admired by thousands of Venetians from their boats in St. Mark basin or from their terraces. After the display, which lasts about 40 minutes, the young people of Venice head to the Lido to wait for dawn. Three regattas are held on Sunday. Religious celebrations are held in the Church of the Holy Redeemr on Saturday at 7:30 pm and on Sunday at 12:30 am and 8 am.

Take a Gondola if you can afford it: it’s expensive, but the Gondoliere may decrease the price if you ask (but they can also decrease the time…). Make sure you reach an agreement on price and time before you start! A good tip with the Gondolieres is to bargain the price down as low as you can, then say that it’s still too much and walk away. Two or three of them will chase after you, one after the other, each offering a lower price than the last. It’s possible to knock €20-€30 off the price.

Some guidebooks discourage tourists from asking for gondola price reductions. The oarsmen have an informal habit of cutting the most interesting and little-known parts from the journey path for “discount” customers. Reduced rate riders get much less marvel in exchange for a moderate price drop, which may not be worth it.

If a gondola seems a little pricey, the alternative is to cross the Grand Canal by traghetto. These are largely gondolas that have seen better days. They are stripped down and used as municipal ferries. In the 1950’s there were as many as thirty, but now there are seven points to find them. However some only operate when people are going to and from work. The length of any crossing is just a few minutes. Many visitors enjoy visiting the open air markets near the Rialto Bridge and there is a traghetto station there, at the Pescheria (fish market) joining the Santa Sophia church along the Strada Nova. You will notice that traghetti passengers tend to stand up, but if you are not comfortable doing so, sitting is possible, if you are careful. The more adventurous can try the Venetian style of rowing through Row Venice or one of the many rowing clubs. Do take of your backpack before getting on and while on board as it inhibits your balance and might hit others when making sudden moves.

If you are looking for something to do, you can always shop. Venice is packed full of little stores in every corner and crevice. The commonest local specialties are Carnival masks, glass, and marbled paper. Price can vary wildly, so it’s a good idea to hold off buying until you have a fair idea about the relative value of things. As is the case with most tourist cities, a LOT of the original and “made in Venice” items are actually made in China. Murano is an island famous for its glass making. Almost in every shop you will find “original Murano glass” items. If it was really made in Murano, it would be prohibitively expensive, with prices routinely running into thousands of euros. So if you are looking for cheap souvenirs, real Murano glass is not the thing to buy! You can also see glass making demonstrations in Murano, but be sure to check that there is a demonstration scheduled for that day. And it is normally not done in winter either.

Spend a day on the islands, mainly Murano, Burano and Torcello. There are boat services to all these islands at scheduled times, including between the islands themselves. Be prepared for long lines and long waits for the boats between islands (especially on the afternoon return rides from Burano).

The Glass Museum in Murano and the Lace Museum in Burano are certainly worth a visit. In Burano you will find some of the most picturesque streets and houses, with each house sporting a different pastel shade. It’s really beautiful. Though there is not much to see in Torcello except for the old church, and the supposed “Throne of Attila”. However, the peace and tranquility of the island is not to be found anywhere else in Venice. Torcello is also home to a very expensive Cipriani restaurant. But just walking around on these islands is a nice enough experience. If you’ve had enough of the hype and the other tourists, hop off the vaporetto at ‘Cimitero’, Venice’s graveyard for a peaceful walk. There are many famous tombs, and the section dedicated to deceased children is particularly haunting. There is also a free toilet there.

While going through Venice, make sure you take in the beauty of it all. Walk through the alley ways, and take the water taxi to different parts of the island, sometimes at night you can just go sit in an open area and watch locals and tourists passing by. It is wonderful. There are many museums and churches that are around the city that allow tourists to go in a visit. They are many great sights to keep you busy throughout your visit.

The “Secret Itineraries in Doge’s Palace” worth a visit, take the visitor into the most secret and fascinating rooms in the Palace. It’s better to book in advance.

Because Venice is now pretty much only inhabited by tourists and people serving the trade, it gets very quiet by 9.00 and there is very little to do in the evening (outside of eating). There are a few exceptions, like some classical music concerts, which most probably only play Vivaldi.

If you would like to have a guide to show up the highlights of Venice, you can choose between many offers. There are walking or boat tours, focused on shopping or history or for art lovers, and many itineraries.

Send a Postcard or even better, an entire mail dedicated to an important one (the old “snail mail” one, not the electronic variety)! Venice has a long, celebrated tradition in postal services, paper and written communication in general (including one of the earliest medieval book printing houses). Avoid using the globepostalservice (GPS) stamps. These are stamps sold by a private owned company through the tobacco shops using black mailboxes (the public ones are red) which charges more than normal and there have been lots of complains of delayed delivery and sometimes failure of delivery. Ask instead for the normal stamps.

Venice it’s also Riviera del Brenta old canals. The Riviera del Brenta is famous for its extraordinary Palladian villas along the Brenta river, its museums and historical buildings and it is located only 25 miles from Venice. This Riviera and its mainland include 7 small cities: Stra, Fiesso d’Artico, Dolo, Fossò, Mira, Oriago and Malcontenta. These places are indicated for cycling excusions and to see antique Palladian Villas built on the Brenta River. In Stra village the famous gardens of Villa Pisani and the museum of the shoes in Villa Foscarini Rossi. In this last museum you can admire 1500 models of made in Italy shoes created from local factories for major brands included Fendi, Genny, Yves Saint Laurent, Givenchy, Ungaro, Anne Kleyn, Richard Tyles, Vera Wang and much more. In Dolo village you can visit the square, old watermill (XI century) and big open air market.