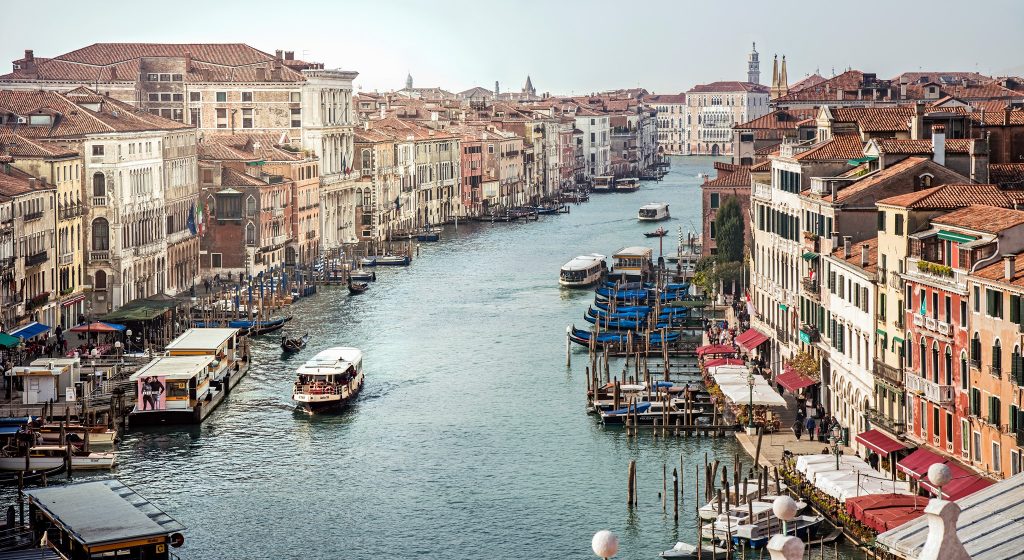 Explore Venice a city in Veneto, a region of North-East Italy.

The city is virtually the same as it was six hundred years ago, which adds to the fascinating character. Venice has decayed since its heyday and is heavily touristy (there are 56000 residents and 20 million tourists per year).

This place may not seem huge, but it is, and is made up of different boroughs.

The most famous is the area comprising the 118 islands in the main districts that are called “Sestieri”: Cannaregio, Castello, Dorsoduro, San Polo, Santa Croce and San Marco, where the main monuments and sights are located. Other main districts are Isola Della Giudecca and Lido di Venezia. Some of the more important islands in the lagoon include Murano, Torcello, San Francesco del Deserto, and Burano.

The people of Venice have been engaged in, and have excelled at, numerous industries over the centuries, including commerce, printing, the fine arts, manufacturing and organizing pilgrimages to the Holy Land. Today, some of the industries that remain include: shipbuilding, trade, Murano glass production and Burano lace production.

However, tourism is by far the number one industry, and Venice is one of the most-visited tourist destinations on the planet. Specifically, it ranks 29 among world tourism cities and sees around 20 million visitors every year. The main draws are its beautiful architecture, numerous art collections and important historical landmarks. The canals and romantic gondolas, however, are probably the top reason 50,000 tourists visit Venice on a daily basis.

Venice is served by three airports:

Venice, the world’s only pedestrian city, is easily walk able, and the absence of cars makes this a particularly pleasant experience. However, walking and standing all day can also be exhausting, so it is best to pace yourself. The Rialtine islands – the ‘main’ part of Venice – are small enough to walk from one end to the other in about an hour, provided you don’t get lost (a common occurrence).

The area is -apart from going up and down the bridges- very level. Wheeled objects will not start moving of their own. Wind, however, might be a different thing.

All transport involves either walking or boats.

Bear in mind that most canals do not have any sort of railing and that tourist crowds might make progress very tedious at times.

Not all canals are navigable by water taxis (if in doubt, check with your hosts beforehand).

Depending on the kind of landing and tides, you might have to negotiate (up- or down-) differences in levels between the landing and boat of 30cm / 1 foot or more or uneven and often slippery steps

The boat will be wobbly, unaccustomed persons or those with limited abilities will need a hand

Boat captains must remain on their craft at all times, so they cannot give you a hand with luggage outside their boat

These days, gondolas are mostly used for scenic purposes instead of actual transport from point A to point B.

There are many stops dotted around the areas frequented by tourists and they are readily obvious, even when the gondolieri dress in something warmer then straw boaters and striped tops.

On foot is definitely the best way to experience Venice.

Venice itself is not a large city. Most destinations across the city can be reached within 20 minutes of walking, if you know your way and can stay clear of tourist congestions.

Unless you are pressed for time, just start walking and let yourself get lost in the maze of alleys that is Venice. In time, you will always come across a familiar landmark or to a vaporetto stop to regain your bearings.

Along the way you will discover marvelous art, superb architecture and breathtaking urban landscaping as well as bars, cafes and restaurants to soak up the local atmosphere and rest your weary feet.

What to see. Best top attractions in Venice, Italy.

What to do in Venice, Italy – events.

Venice has always been (and will always be) one of the most romantic cities in the world, so a romantic activity is a must-do if you’re here with your loved one. One popular idea is a dinner cruise in Venice like the Galleon Dinner Cruise in Venice on board the Venetian Galleon.

Venice has always been a city of merchants. Consequently, most of the Venetians working in Venice still own or work at a shop. If the pride of the Republic of Venice was the extreme diversity and quality of goods and services which could be found in Venice, these days, however, mass tourism led Venice to be populated with many shops selling low-quality souvenirs. The local shops are suffering a lot from this situation and it is not easy to identify them within the crowd of shops selling harmful imported goods.

Shops generally open around 10am and stay open at least until 7pm, sometimes later, depending on proximity to tourist haunts. Some shops (especially in the more out-of-the-way-areas might close from noon to 2pm.

Those wishing for more affordable fare can find it at low-end trinket stores and mid-market boutiques scattered here and there throughout the city. At the Rialto Market, for example, you can find relatively cheap T-shirts and toy plastic gondolas. Most of the shops of Venice, however, specialize in local artisan products, big-names Italian fashion and everything “boutique.”

Be careful when buying fake luxury products from people spreading their wares on the pavement (especially handbags, sunglases and the like). Apart from damaging the industry, such low-quality items may be confiscated at customs and you may be liable to a fine.

If you’ve come to Venice thinking that you won’t be able to do a bit of designer shopping, think again! Just like in every major Italian city, you get the big fashion brand names here too. For label clothing shopping, the best area is that around the Piazza San Marco, where you can find Versace, MaxMara, Gucci, Armani, Louis Vuitton, Prada (and numerous more) big names.

What to eat – drink in Venice

While outside reception is usually good, indoors it will very often be poor to impossible, due to the thick walls and narrow alleys. You will rely heavily on Wi-Fi while indoors, especially for surfing the internet. You can often see locals stepping outside to be able to phone.

Venice has several internet cafes, but they are much more expensive than the rest of Europe.

Pretty much every bar, restaurant, hotel, B&B, etc. will have Wi-Fi available. Just ask. Be aware that mobile reception indoors is usually poor (due to the thick walls) and Wi-Fi will be the only option.

Venice is an ancient monument and does not adapt easily to modern requirements.

Most areas outside the main tourist attractions (around San Marc’s square) are unsupportive of any kind of mobility aid, be it strollers, wheelchairs, walkers or crutches.

Any person with a walking impairment will frequently need strong aid to negotiate uneven surfaces and the steps of the many bridges, narrow doorways and cramped restaurants.

Some bridges along the waterfront near San Marc’s square or Zattere have ramps installed (at least during peak tourist times), so you will be able to reach the boat landings. But raised walkways during acqua alta will be next to impossible to use. It is essential to inquire beforehand and plan your daily routes.

Vaporetto services are mostly accessible to wheeled aids (with special seats and space), though it might be an effort to get onto the smaller boats (like the 4.x or 5.x lines).

Still, expect ramp angles to vary with the tide and, of course, the step onto a moving boat.

Around the Venetian lagoon are other smaller islands, which have since been deserted but are worth a visit. There is also the Lido, which is a long narrow island with more modern buildings, hosting a youth hostel and a hotel.

Watch a video about Venice