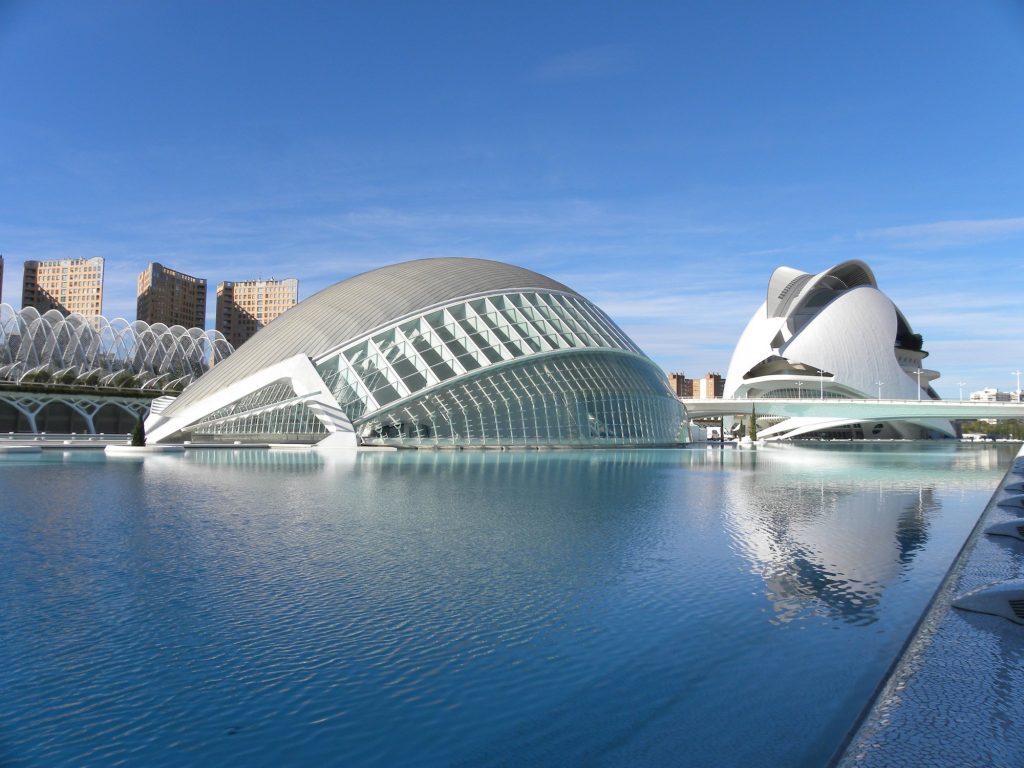 Explore Valencia a charming old city and the capital of the Old Kingdom of Valencia province of Spain that is well worth a visit. It is the third Spanish city in terms of importance and population, and the 15th in the European Union, with 810,064 inhabitants in the city proper and 1,832,270 in the Metropolitan Area. It is on the Mediterranean Sea approximately four hours to the south of Barcelona and three hours to the east of Madrid. Valencia is famous for its Fallas Festival in March, for being the birthplace of paella, and for the massive architectural project by Santiago Calatrava called The City of Arts and Sciences.

The river Turia ran through the centre of the city, but it was redirected a while back and replaced by a beautiful park. This is a very nice place to spend any free time you have in the city on a sunny day.

The construction of the “City of Arts and Science by renowned architect and Valencian Santiago Calatrava have made Valencia a city in transition. Massive construction and transformation over the last years have turned a once little-considered medium city into a meatier and more interesting destination.

Valencia was founded by the Romans and was held by the Moors from the 8th to the 13th century. In 1609, the Moors who had converted to Catholicism were expelled from the city. During the Spanish civil war in the 1930s, Valencia was the capital of the Republic, which eventually lost to Franco’s forces.

Valencia Airport is 9 km from the city center.

What to see. Best top attractions in Valencia, Spain

What to do in Valencia, Spain

Valencia has a fantastic festival each March called Fallas, in which local areas build big papier maché models. They are mostly of a satirical nature and can be as tall as a few stories.

Another feature of Fallas is the fireworks. It’s like the city’s a war zone for a week! They wake you up early in the morning and go on through the day. Every day, there are three fireworks events, la despertà, la mascletà, and el castillo.

The days of 17th and 18th of March is La Ofrenda. The falleras from each falla take flowers to the Plaza of the Virgin. These flowers are used to construct the virgin. The processions are grand and very beautiful and worth catching. They follow two main paths: one down calle San Vicente and the other down Calle de Colon.

At the end of a week displaying the ‘fallas’ they are burnt. This is called la cremà. The fallas infantiles are burned at 10PM and the fallas mayores are burned anywhere from midnight to 1AM. The one at the town halls is burned last at 1AM. The most impressive to see are the fallas in Sección Especial, because these are the largest and most dramatic when they burn. These tend to be very crowded and one should arrive early.

Things one should do during fallas:

Barrio del Carmen is a major nightlife destination in Valencia. There are numerous restaurants, bars, and dance joints, which tend to cater to a youngish crowd, in particular along Calle Caballeros.

Plaza del Cedro is a nice place where all possibilities are given to spend a night in a less touristic ambiance than in the center.

A lot of Bodegas and Tapas bars where you can get typical Spanish dinner for quite good prices. When you arrive early (the Spanish early) at about 8PM they are usually having special offers like “Tercio y Tapa”. To find them orientate more to the parallel streets to Carrer de Doctor Manuel Candela.

Later to drink something occupying the time between dinner and going out there are many bars with different kind of music present.

If you feel like dancing there are famous pubs where especially at the weekends a lot young people can be found. The entrance is normally for free and they are almost neighbors all located in Calle Campoamor. The music is more alternative (Rock/Indie/Pop) that in general in Spain but it changes depending on the DJ. So just have a look to all of them to find the one you like most. They are closing at half past three in the morning and if you don’t want to be alone maybe the best time to arrive is between half past one and half past two. For more details see:

Additionally there is typical Spanish nigh-life feeling on the Plaza del Cedro itself. Different kind of people enjoying the mild Mediterranean sit outside talking, drinking and playing guitar often until the sunrise.

Other centres of are night-life are Cánovas (more upscale), Juan Llorens (young also, less “alternative”), around the university (students), and increasingly in the area near the beach and port.

Wine lovers may want to explore the wineries of the Valencia wine region , including Bodega El Angosto, Bodegas Los Frailes, and Bodegas Murviedro.

Watch a video about Valencia