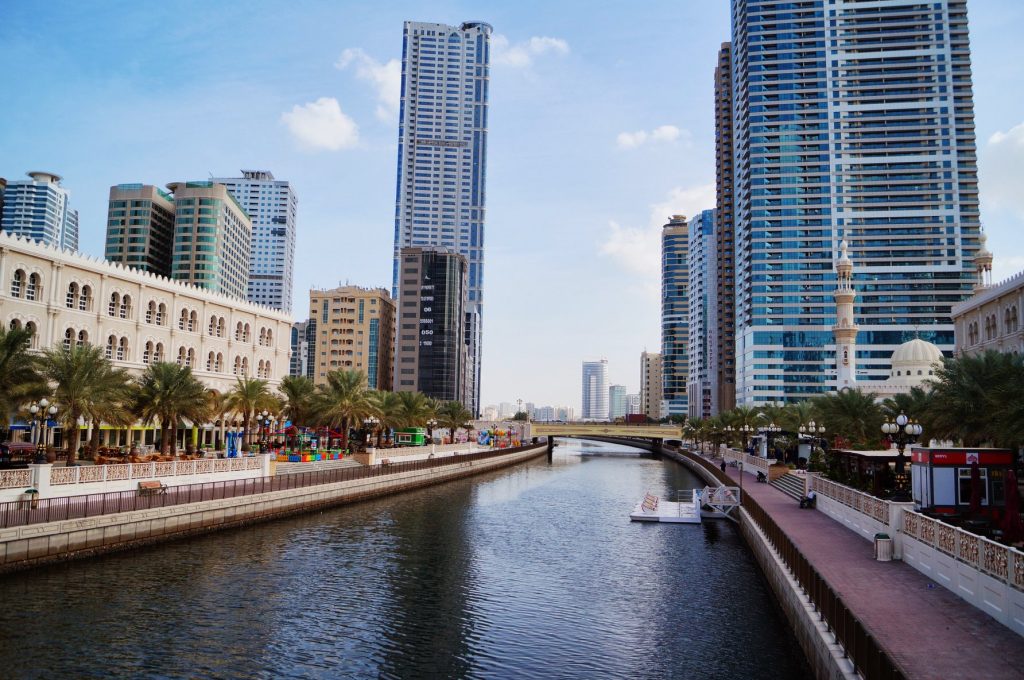 Explore the United Arab Emirates sometimes simply called the Emirates, a country in Western Asia at the southeast end of the Arabian Peninsula on the Persian Gulf, bordering Oman to the east and Saudi Arabia to the south, as well as sharing maritime borders with Qatar to the west and Iran to the north. The sovereign constitutional monarchy is a federation of seven emirates consisting of Abu Dhabi (which serves as the capital), Ajman,  Fujairah, Ras Al Khaimah, Sharjah and Umm Al Quwain.

Their boundaries are complex, with numerous enclaves within the various emirates.

Human occupation of the present UAE has been traced back to the emergence of anatomically modern humans from Africa some 125,000 BCE through finds at the Faya-1 site in Mleiha, Sharjah. Burial sites dating back to the Neolithic Age and the Bronze Age include the oldest known such inland site at Jebel Buhais. Known as Magan to the Sumerians, the area was home to a prosperous Bronze Age trading culture during the Umm Al Nar period.

The climate of the UAE is subtropical-arid with hot summers and warm winters.

The UAE has a modest dress code. The dress code is part of Dubai‘s criminal law. Most malls in the UAE have a dress code displayed at entrances. At Dubai’s malls, women are encouraged to cover their shoulders and knees. But people can wear swimwear at the pools and beaches.

People are also requested to wear modest clothing when entering mosques, such as the Sheikh Zayed Mosque in Abu Dhabi. Mosques which are open to tourists provide modest clothing for men and women if needed.

Dubai International Airport was the busiest airport in the world by international passenger traffic in 2014, overtaking London Heathrow. A 1,200 km (750 mi) country-wide railway is under construction which will connect all the major cities and ports. The Dubai Metro is the first urban train network in the Arabian Peninsula. The major ports of the United Arab Emirates are Khalifa Port, Zayed Port, Port Jebel Ali, Port Rashid, Port Khalid, Port Saeed, and Port Khor Fakkan.

Abu Dhabi, Dubai, Sharjah, Ajman, Umm Al Quwain, and Ras Al Khaimah are connected by the E11 highway, which is the longest road in the UAE. In Dubai, in addition to the metro, Dubai Tram and Palm Jumeirah Monorail also connect specific parts of the city.

The traditional food of the Emirates has always been rice, fish and meat. The people of the United Arab Emirates have adopted most of their foods from other West and South Asian countries including Iran, Saudi Arabia, Pakistan, India and Oman. Seafood has been the mainstay of the Emirati diet for centuries. Meat and rice are other staple foods, with lamb and mutton preferred to goat and beef. Popular beverages are coffee and tea, which can be complemented with cardamom, saffron, or mint to give them a distinctive flavour.

Popular cultural Emirati dishes include threed, machboos, khubisa, khameer and chabab bread among others while Lugaimat is a famous Emirati dessert.

With the influence of western culture, fast food has become very popular among young people, to the extent that campaigns have been held to highlight the dangers of fast food excesses. Alcohol is allowed to be served only in hotel restaurants and bars. All nightclubs are permitted to sell alcohol. Specific supermarkets may sell alcohol, but these products are sold in separate sections. Likewise, pork, which is haram (not permitted for Muslims), is sold in separate sections in all major supermarkets. Note that although alcohol may be consumed, it is illegal to be intoxicated in public or drive a motor vehicle with any trace of alcohol in the blood.

Formula One is particularly popular in the United Arab Emirates, and is annually held at the Yas Marina Circuit. The race takes place in the evening, and was the first ever Grand Prix to start in daylight and finish at night. Other popular sports include camel racing, falconry, endurance riding, and tennis. The emirate of Dubai is also home to two major golf courses: The Dubai Golf Club and Emirates Golf Club.

Islam is the largest and the official state religion of the UAE. The government follows a policy of tolerance toward other religions and rarely interferes in the activities of non-Muslims. By the same token, non-Muslims are expected to avoid interfering in Islamic religious matters or the Islamic upbringing of Muslims.

The government imposes restrictions on spreading other religions through any form of media as it is considered a form of proselytizing.

Arabic is the national language of the United Arab Emirates. The Gulf dialect of Arabic is spoken natively by the Emirati people. Since the area was occupied by the British until 1971, English is the primary lingua franca in the UAE. As such, knowledge of the language is a requirement when applying for most local jobs.

Other cities of interest are Al Ain, Buraimi,  Hatta,

Watch a video about UAE