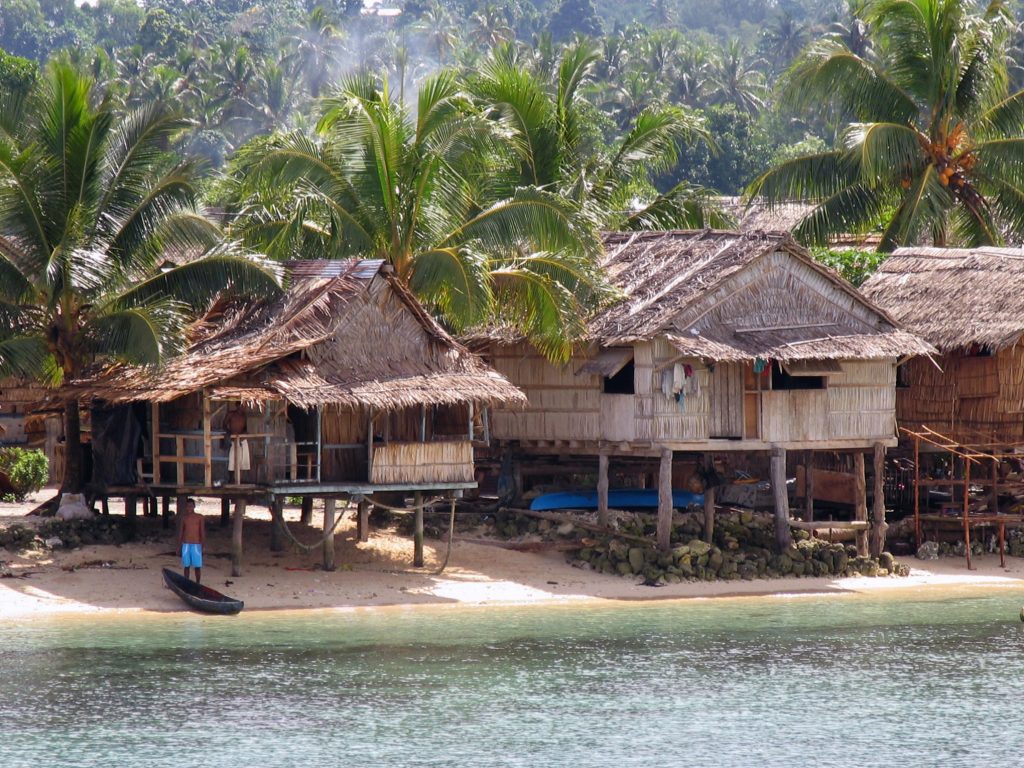 The Solomon Islands is a wide island nation and the distance between the westernmost and easternmost islands is about 1,500km (930 mi). The Santa Cruz Islands.

The Solomon Islands are believed to have been inhabited by Melanesian people for thousands of years. It is believed that Papuan speaking settlers began to arrive around 30,000 BC. Austronesian speakers arrived circa 4,000 BC also bringing cultural elements such as the outrigger canoe. It is between 1,200 and 800 BC that the ancestors of the Polynesians, the Lapita people, arrived from the Bismarck Archipelago with their characteristic ceramics.

The Solomon Islands archipelago is part of two distinct terrestrial ecoregions. Most of the islands are part of the Solomon Islands rain forests ecoregion. These forests have come under great pressure from forestry activities. The Santa Cruz Islands are part of the Vanuatu rain forests ecoregion, together with the neighboring archipelago of Vanuatu. More than 230 varieties of orchids and other tropical flowers brighten the landscape. The islands contain several active and dormant volcanoes with Tinakula and Kavachi being the most active. The highest point is Mount Makarakomburu, at 2,447 meters. Many low lying coral atolls dot the region.

The islands’ ocean-equatorial climate is extremely humid throughout the year, with a mean temperature of 27 °C and few extremes of temperature or weather. June through August is the cooler period.

Honiara International Airport is located 8 kilometers east of the capital,

Cruise ships occasionally visit Honiara and the outer provinces as part of a scheduled tour. It is usually not possible to use these vessels as one way transport to or from the country.

Recreational yachts regularly visit the Solomon Islands, many staying for extended periods to enjoy and explore the many islands, coral atolls and beautiful lagoons.

Due to the layout of the country, Solomon Islanders are very used to travelling by sea and in most cases this is seemingly the preferred method of travel. While this may not be the fastest way to get to your destination, voyages by sea can be scenic and take you through lesser-travelled areas. As most offer quite basic amenities, they are also considerably cheaper than travelling by air.

The islands are home to more than 120 indigenous Melanesian languages, with most citizens speaking the local Melanesian Pidgin as a lingua franca. English is the official language, but spoken by only 1 or 2% of the population.

One of the most popular activities in Solomon Islands is scuba diving. As part of the Coral Triangle, the Solomons offer some of the best diving in the south pacific. There is one local operator in Honiara offering day trips to the nearby islands and shore dives to the very popular Bonegi Beach. In addition, two live aboard operators offer trips varying in length from 7 to 14 days exploring more remote areas in the Solomons. There are also operators in Munda, Gizo and Uepi along with a number of small operations scattered among the remote islands. A good source of information is the Solomon Islands Visitors Bureau.

ATM’s are available in Honiara. Australian dollars are accepted at some hotels and resorts.

The bulk of the population depends on agriculture, fishing, and forestry for at least part of their livelihood. Most manufactured goods and petroleum products must be imported. The islands are rich in undeveloped mineral resources such as lead, zinc, nickel, and gold. However, severe ethnic violence, the closing of key business enterprises, and an empty government treasury have led to serious economic disarray, indeed near collapse. Tanker deliveries of crucial fuel supplies (including those for electrical generation) have become sporadic due to the government’s inability to pay and attacks against ships. Telecommunications are threatened by the nonpayment of bills and by the lack of technical and maintenance staff, many of whom have left the country.

Although there’s no legal purchasing age of alcoholic beverages, the legal drinking age is 21.

Although not expensive, mobile internet is very slow. Free prepaid SIM cards are available from Our Telekom and BMobile. Be aware that BMobile is the cheapest, but has also a less extensive coverage. Some places in Honiara will have free wifi.

Watch a video about The Solomon Islands