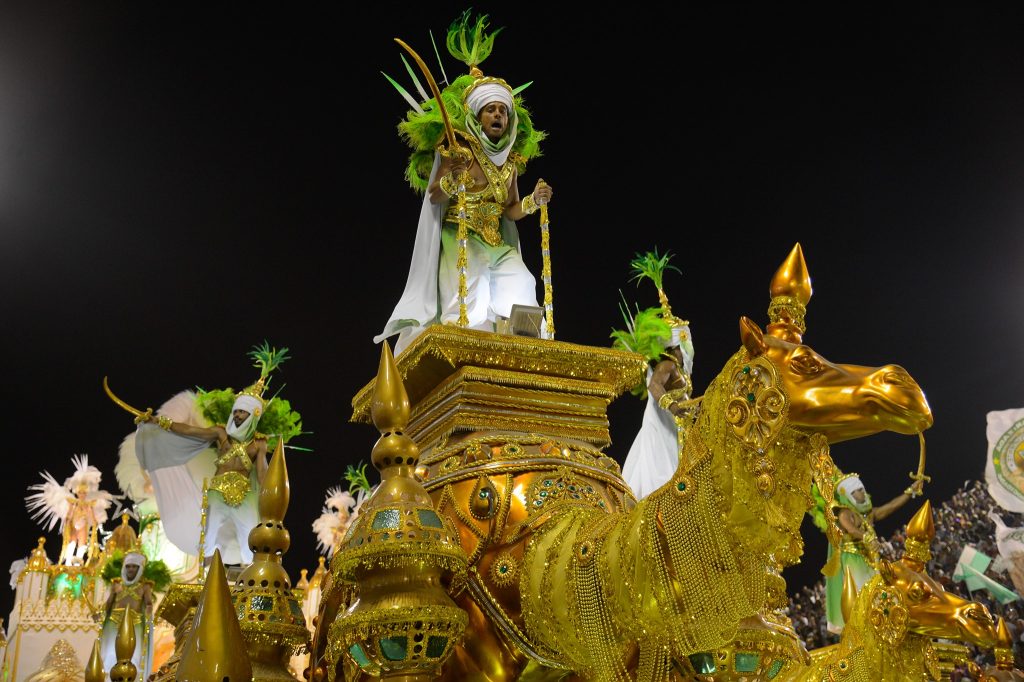 The festival held every year before Lent and considered the biggest carnival in the world with two million people per day on the streets. The first Carnival festival in Rio occurred in 1723.

The typical Rio carnival parade is filled with revelers, floats and adornments from numerous samba schools which are located in Rio (more than 200 approximately, divided into five leagues/divisions). A samba school is composed of a collaboration of local neighbors that want to attend the carnival together, with some kind of regional, geographical and common background.

There is a special order that every school has to follow with their parade entries. Each school begins with the “comissão de frente” (“Front Commission” in English), that is the group of people from the school that appear first. Made of ten to fifteen people, the “comissão de frente” introduces the school and sets the mood and style of their presentation. These people have choreographed dances in fancy costumes that usually tell a short story. Following the “comissão de frente” is the first float of the samba school, called “abre-alas” (“Opening Wing” in English). These are followed by the Mestre-sala and Porta-Bandeira (“Master of Ceremonies and Flag Bearer” in English), with one to four pairs, one active and three reserve, to lead the dancers, which include the old guard veterans and the “ala das baianas”, with the bateria at the rear and sometimes a brass section and guitars.

The Rio Carnival celebration dates back to 1640s. During that time, elaborate feasts were organized to give honor to the Greek wine gods. The Romans used to worship Dionysus or Bacchus, the god of the grape-harvest. The festival ‘Entrudo’ was introduced by the Portuguese and this inspired the birth of the Carnival in Brazil. In 1840, the very first Rio masquerade took place, and polka and waltz took center stage. Africans subsequently influenced the Carnival with the introduction of samba music in 1917, which is now considered a traditional Brazilian form of sounds.

The Carnival begins on Friday and ends on Ash Wednesday, but the Winners’ Parade happens on the Saturday after the carnival ends. The winning school and runners’ up of the Special Group, as well as the A Series champion, all march past one final time on this night.

As the parade is taking place in the Sambadrome and the balls are being held in the Copacabana Palace and beach, many carnival participants are at other locations. Street festivals are very common during carnival and are highly populated by the locals. Elegance and extravagance are usually left behind, but music and dancing are still extremely common. Anyone is allowed to participate in the street festivals. Bandas are very familiar with the street carnival especially because it takes nothing to join in on the fun except to jump in. One of the most well-known bandas of Rio is Banda de Ipanema. Banda de Ipanema was first created in 1965 and is known as Rio’s most irreverent street band.

Incorporated into every aspect of the Rio carnival are dancing and music. The most famous dance is carnival samba, a Brazilian dance with African influences. The samba remains a popular dance not only in carnival but in the ghettos outside of the main cities. These villages keep alive the historical aspect of the dance without the influence of the western cultures.

Music is another major part of all aspects of the carnival. As stated by Samba City, “Samba Carnival Instruments are an important part of Brazil and the Rio de Janeiro carnival, sending out the irresistible beats and rhythms making the crowd explode in a colorful dance revolution fantasy fest”. The samba that is found in Rio is Battucanada, referring to the dance and music being based on percussion instruments. It “is born of a rhythmic necessity that it allows you to sing, to dance, and to parade at the same time.”.  This is why the batucada style is found in most all of Rio’s street carnivals.

Street parades, blocos, and bandas take place throughout the city of Rio during Carnival, the most famous and largest carnival celebration of the world. There can be more than 300 bandas taking place at any given point in time. While the biggest street party takes place right outside the Sambadrome, the largest organized street dance is typically found on Cinelândia Square in Rio’s Centro.

When the Sambadrome was built in 1984, it had the side-effect of taking street parades from the downtown area to a specific, ticketed performance area. Some samba schools have since been motivated by an agenda that focuses on regaining public space, and using the carnival tradition to occupy the streets with parades or blocos. Many of these represent a local community of the area but are open to all.

The Queen of the Carnival in Rio de Janeiro and up to two princesses have the duty to woo the revelry, along with the King Momo. Unlike some cities, in the city of Rio de Janeiro, Queens of Carnival do not see a certain school of samba. In competitions, princesses are usually placed as second and third, and are correspondingly 1st and 2nd Princess. Some of them after the reign become queens or battery bridesmaids.

Official tourism websites of the carnival in Rio

Watch a video about the carnival in Rio