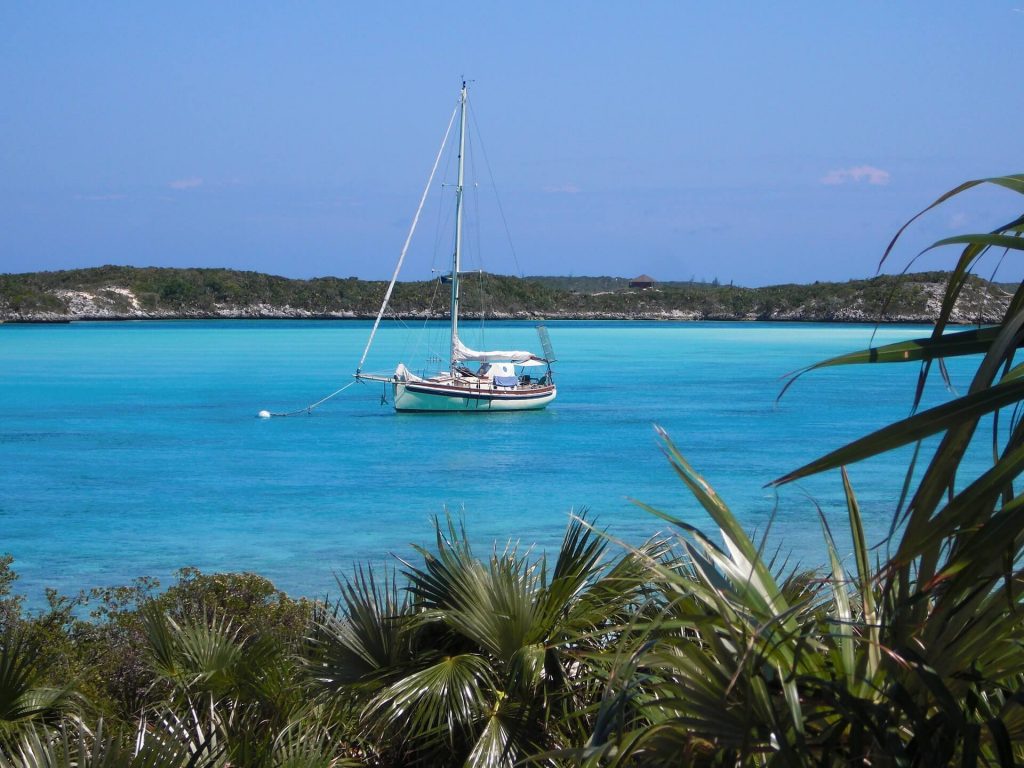 Explore The Bahamas or The Bahama Islands an archipelago consisting of about 2,000 islands if you include the cays, which are small islands that are formed on coral reefs.

The country is officially named The Commonwealth of The Bahamas. The word Bahamas is of Spanish origin and means ‘Shallow Water’. They are located in the Atlantic Ocean. Explore the Bahamas  like when Christopher Columbus first arrived in the West Indies in 1492, he landed on a Bahamian island he named San Salvador.

Arawak natives inhabited the islands when Christopher Columbus first set foot in the New World on San Salvador Island in 1492. British settlement of the islands began in 1647; the islands became a colony in 1783. Since attaining independence from the UK in 1973, the Bahamas have prospered through tourism and international banking and investment management. Because of its geography, the country is a major transshipment point for illegal drugs, particularly shipments to the US, and its territory is used for smuggling illegal migrants into the US. Because the country is tax-free, it is well known as a business destination, and may companies have branches here.

The official language spoken in the Bahamas is English, however the dialect and slang is difficult for most Westerners and Europeans to understand, especially on the “out islands.”

The populace is predictably friendly and more religious than one might expect: the Bahamas have one of the highest ratios of churches per capita in the world, with Baptists being the largest single group

The biggest event in the Bahamian calendar is ‘Junkanoo’, a street parade held on Boxing Day (26 December) and New Year’s Day (1 January). Junkanoo groups “rush” through the streets of towns, especially Nassau, wearing spectacular yet disposable costumes of crepe paper and playing distinctive Junkanoo music, which combines African rhythms with loud brass and cowbells, fusing them together in a medley that veers on cacophony but is exceedingly danceable. The costumes, made from scratch every year, are disposed of on the streets as the party ends and make a great free souvenir to bring home!

The northern islands are subtropical. Summers are hot and rainy, while winters are drier and warm. The southern islands experience a tropical climate, with very stable warmth year round.

Wildlife in Bahamas contains various species. Many different breed of crabs can be found on the beaches. Hermit and Cardisoma guanhumi are two of the land crabs to be noted frequently in the island. The wild horses of Abaco are famous in The Bahamas.

During a tour of the Bahamas, tourists can come across various other species including the Bahamas Hutia, numerous frogs, rocky raccoon, snails such as Cerion, cicada, blind cave fish, ants and reptiles.

Bahamas Wildlife features a wide range of amazing birds. Parrots and pigeons are two of the most common and popular birds found in The Bahamas.

The Bahamas is also home to numerous aquatic life. Sharks, manatees, dolphins, frogfish, angelfish, starfish and turtles can be viewed in the waters surrounding The Bahamas. Apart from numerous species of fish, tourists can spot several types of worms also.

The vast majority of the country’s population lives in Nassau on New Providence Island and to a lesser extent, in and around the Freeport area on Grand Bahama. All other islands are known either as the Out Islands or as the Family Islands because most people in Nassau and Freeport have family on the Out Islands.

The largest airports in the Bahamas are at the capital Nassau, on New Providence, and Freeport, on Grand Bahama. Smaller airports are scattered amongst the other islands.

The Bahamas are a popular port of call for cruise ships plying the Caribbean. The capital, Nassau, on New Providence Island is one of the world’s busiest cruise ship ports, and is well served by ships that originate from Florida. Freeport on Grand Bahama Island is a growing destination as well.

While English is the official language of the Bahamas, a vast majority of the population speaks Bahamian Dialect. There are some minor regional differences from island to island in terms of pronunciation.

Bahamas beaches are an attraction in themselves but Bahamas is known for also possessing landmarks. Some landmarks include The Pompey Museum of Slavery and Emancipation (formerly known as The Vendue House) and Paradise Island which possesses many attractions in itself. There are Forts and monuments all over the city of Nassau and they are open every day for your viewing pleasure. Also there are several art galleries such as the National Art Gallery of the Bahamas, the Central Bank (Lobby), the National Treasury building (Lobby), the D’Aguliar Art foundation and many others where you can view original Bahamian works of art.

Take the distillery tour at John Watlings or try out the Tru Bahamas Food Tours where you can restaurant hop and enjoy authentic Bahamian food at its best. Or be the artist for the day and pop in to the Earth & Fire Pottery Studio and create your own work of art there or try out the Bahama Hand Prints Studio and learn the unique craft in making our national Androsia prints and designs.

Other activities include boat cruise excursions like the Booze Cruise or the Flying Cloud, trying your luck at the Casino at Paradise Island Atlantis Casino, the Crystal Palace Casino at the Cable Beach Strip, or in Bimini. There are many eco/environmental tours and opportunities to get to know the wild life up close and plenty of activities for the kids at Atlantis, Adastra Gardens or at Dolphin Encounters on Blue Lagoon Island.

For the nature lovers there are several Eco Adventures like the nature walks at the Clifton Heritage Site and various Cave tours in Nassau and on many other islands. There is also golfing at the Ocean Club on Paradise Island or at Sandals Emerald Bay in Exuma.

If you prefer to explore at your own pace then you can opt to rent a vehicle and tour the islands by yourself. If in Nassau many opt to visit the National Art Gallery, the Pirates Museum, and several historic sites like Fort Charlotte or Fort Montague just to name a few. If you want more water action you can sign up for the “Booze Cruise”, the Flying Cloud tour or book a day excursion to Rose or Blue Lagoon Island and enjoy swimming, beach pic nick’s or meet the friendly Dolphins.

There are also many festivals that go on year round in the Bahamas especially during the summer time like the Goombay (Nassau), Pineapple (Eleuthera) and Rack n’ Scrap (Cat Island) Festivals. Lastly you can occasionally view a Junkanoo performance in the summer time as well.

Bahamas Dolphin Encounters. No Bahamas vacation would be complete without an encounter with dolphins, and booking a dolphin experience through Bahamas Dolphin Encounters is a sure way to make sure this dream comes true for you and your family. It’s an incredible feeling to get up close and personal with friendly dolphins, and even on a deserted island or in the open ocean.

All the usual Caribbean luxury retailers are found in Nassau and Freeport, including both stand-alone boutiques for international luxury brands as well as regional Caribbean retailers that specialize in representing multiple brands.

There is very little made in the Bahamas, but some luxury goods can be purchased at a bargain, although you should do your research in advance and make sure you can properly import any purchases under your home country’s duty-free allowance.

As you’d expect in an island nation, seafood is very popular. The national dish is conch, a type of mollusc, served deep-fried (“cracked”) or raw with a twist of lemon, and as elsewhere in the Caribbean, the classic accompaniment is peas and rice. Cracked conch looks like and tastes a little like fried calamari, but conch meat is tougher than squid and has a stronger flavor.

Like most islands in the region, the Bahamas is unable to grow the majority of fresh fruits and vegetables and lacks ranching capability to grow chicken or cattle on an industrial scale. As a result, all those items must be imported from the mainland, either via air cargo or in refrigerated container units. Expect any dish based primarily on such imported items (as opposed to local items like conch) to cost at least as twice as much as its mainland counterpart or even higher.

There is a concentration on the customer at hand. You are expected to patiently wait your turn. At fast food restaurants the server will take care of only the first customer until they have left the service area. Don’t expect to be in a hurry even at a fast food establishment.

Service in the Bahamas takes place at a relaxed pace. Travellers can expect a leisurely pace to their meal. Expect polite, if slow, service at most establishments.

“Goombay Punch” is the local soda. It has a pineapple flavor and is what the locals call a “Sweet” soda versus a cola. It is sold in cans at all grocery stores and also available in almost every Bahamian eatery.

Kalik is the national beer of the Bahamas and is always served at “all-inclusive” resorts. There are three rather distinct types: “Kalik regular” which has 4% alcohol and a smooth refreshing taste, “Kalik Light” which has been often compared to a Budweiser is a light lager which delivers the same great taste as the regular kalik but with a lower alcohol content and less calories, “Kalik Gold” has 7% alcohol, though very potent it has an excellent taste, which gives you an extra feel of the island. Guinness is also very popular.

Imported beer can be incredibly expensive in the hotels but is not overly priced in bars and liquor stores. Cases of beer are available in a variety of Duty Free liquor stores.

The drinking age is 18, however it is weakly enforced and teenage drinking is common.

The Bahamas has its own native rum to offer with a variety of brands which include Ron Ricardo rum, Ole Nassau Rum and a very popular Fire in the Hole Rum, while this fire in the hole rum is gold in color it has a very distinct bottle label which is sure to be a good conversation piece in the home. The Ron Ricardo rums and Ole Nassau rums both come in a variety of flavors. Ron Ricardo has the best leading coconut rum which is used to make the ever so popular island drink “The Bahama Mamma”. Other flavors include mango, pineapple and banana, a gold rum, light rum and one 151 rum. The Ole Nassau rum also offers all of the flavors to that of the Ron Ricardo. Its bottle label too is very unique and creative portraying a pirate ship along the Bahama Islands.

Tourism is the main industry followed by banking. 50 percent of the national GDP is generated by tourism.

Bahamians are good-natured but do not suffer fools gladly.

Explore the Bahamas and you will not regret.

Official tourism websites of the Bahamas

Watch a video about the Bahamas