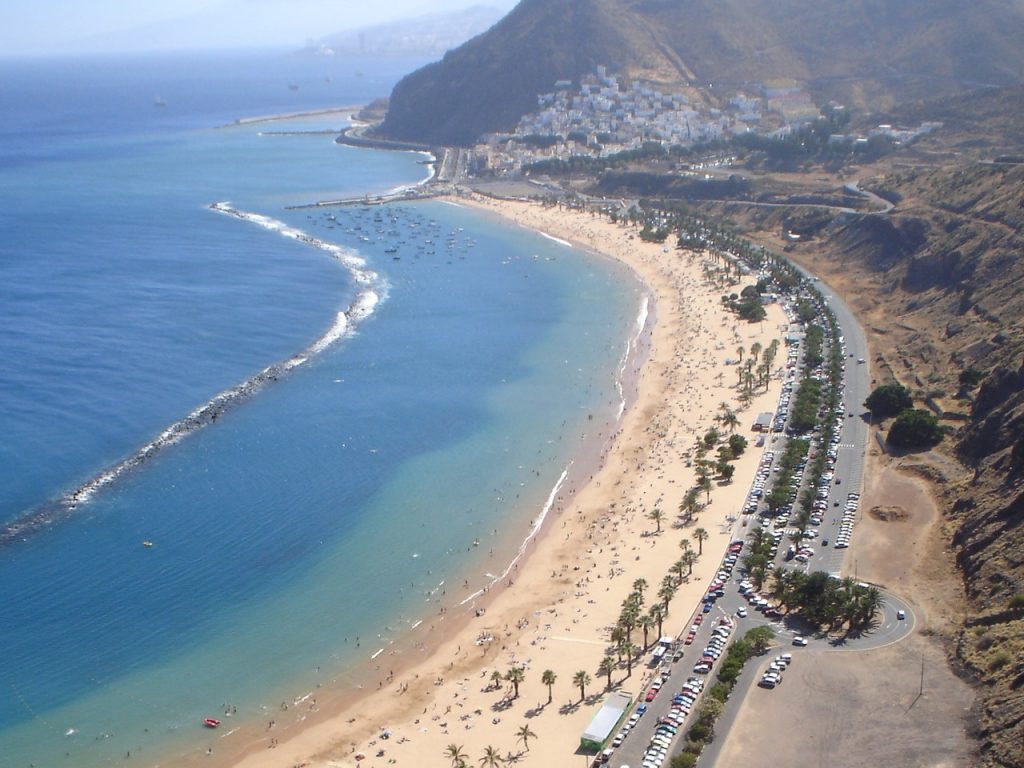 Explore Tenerife the largest of the Canary Islands and is a great place to travel. British and German tourists come in their tens of thousands every year to visit its spectacular beaches and lively nightlife. It is also very popular among holidaymakers from the Spanish peninsula, especially during Easter time. Tenerife is probably one of the last European paradise isles. It offers lush forests, exotic fauna and flora, deserts, mountains, volcanoes, incredibly beautiful coastlines and spectacular beaches.

A poor, banana-growing region in past decades, Tenerife has been brought up to European living standards since the arrival of mass air travel in the 1960s, which brought industry and millions of tourists each year. Over the decades this has led to many complexes and houses being built, making parts of the island highly urbanized. While part of the EU for political purposes, the island remains outside its customs and VAT area, making high tax goods such as tobacco and alcohol cheaper than elsewhere in Europe.

Many of the young tourists hang out on the south of the island with older and family tourists choosing Puerto de La Cruz and its environs. On the south side there is consistent summer, little to no wind, and pretty much perfect beach-weather for much of the year though there have been rare instances of cool to cold weather in the Jan-Feb period. Also expect some very wet days for that time of year though most days will still be sunny. There are plenty of hotels, activities and British food and drink.

On the north side of the island you will find more green and vibrant local culture. There is a more Spanish year-round springtime feel. The weather fluctuates a bit more here, but is also mostly pleasant though not as hot as the south.

In between the north and south of the island sits Spain‘s tallest peak, the barely dormant volcano El Teide (3718m above sea level). Tours previously allowed people into the crater, but tourists are no longer allowed into the crater for safety reasons.

The local currency is the Euro and most places accept credit or debit cards, which require a chip and PIN. There are many exchange bureaus in the main tourist resorts but not in the Spanish places like Santa Cruz.

There are two airports, Tenerife South (Reina Sofia) near Los Cristianos and Tenerife North (Los Rodeos) by La Laguna. There are several buses connecting the airport to the main cities; for smaller cities, expect to have to make bus changes. They stop around midnight and start again around 5-6AM.

What to see. Best top attractions in Tenerife, Canary Islands

Santa Cruz has a number of museums an art gallery, a space museum and planetarium on a small scale near La Laguna.

In February there is a huge fancy dress parade by locals which is said to be third in size after Rio and Notting Hill carnivals.

Tenerife is a favored destination for scuba divers, with numerous dive operations of all qualities and nationalities. The waters round the island are dive able throughout the year, with the temperature varying between 18 degrees in January to around 25-26 degrees in August. Go around the harbor wall in Puerto de la Cruz for fantastic volcanic rock formations, or feed the stingrays at Las Galletas for something a bit different.

Of course, many visitors just want to spend their time on a beach or by the hotel swimming pool. Playa Americas beach is black volcanic sand, but Los Cristianos is yellow imported sand. The black sand feels the same as the yellow, but can be much hotter when sunny and is not as pleasing to look at to many. Beaches often have sun-loungers with parasols available to hire for the day, but if you are doing this for a few days it is probably better to just buy a parasol and some beach mats.

Tenerife Fishing With over 400 species of fish and over 50 world records, Tenerife offers some of the very best fishing around. You are able to fish all year catching a variety of fish from Blue Marlin, Shark, Tuna, Wahoo, Amberjack and many bottom feeding fish including giant Rays. Marlin fishing is considered to be one of the biggest feats in sport fishing. The Blue Marlin, regarded as the ‘King of Fish, is the largest of all the Marlins and landing a Blue Marlin is considered to be the highest achievement of a big game fishing angler. Anglers from all around the world go looking for these magnificent creatures so that they can add the most precious feather to their cap. The largest ever caught in Canarian waters weighed in at over half a ton (537,5kg).

Tenerife is an excellent destination for hiking. There are routes for anyone, from leisurely one hour strolls to extremely strenuous full day hikes in demanding terrain with either a huge ascent, descent or both. These are the most interesting hikes:

Tenerife attracts a large number of cyclists all year around. Whether mountain biking, roadbiking or riding an electric bike, Tenerife has plenty of beautiful roads and dirt tracks. If you want to avoid the hassle of bringing your own bike, you can rent bikes on the island, for example in Las Americas or El Médano. Cycling is hard to do casually – the coastal roads are busy and there is little room for bikes except often in the gutter. However if you like cycling up hills there are plenty of steep roads to climb as soon as you leave the coastline. For those less fit, one tour company offers a car trip to the top of El Teide with a cycle down, no pedaling required.

The island is quickly becoming an important winter destination for cross-country and Enduro Mountain biking, as on average it enjoys sunny skies and warm temperatures when Europe’s bike resorts are covered in mud and snow. Exploring the island on a mountain bike is a rewarding experience, thanks to the great diversity of terrain, vegetation and elevation. Little compares to a descent through lava fields and Canary pines to the beach in time to sip a beer at sunset. Guiding businesses will take you safely on Tenerife’s best trails.

Karting Club Tenerife. Go-karts and motor bikes are raced in the main track and two sizes of cart on the kit track. Located close to Playa de las Américas free bus service from and back to your hotel.

In Playa de las Américas, there are many shopping centers, such as the Safari Centre and the Siam Mall, which have many familiar clothes shops and restaurants.

Santa Cruz has a big market by the station on Sunday mornings, and a local picturesque market Mercado Municipal Nuestra Señora de África (open daily until 14:30). Las Americas has one Thursday and Saturday and Los Cristianos on Sundays.

There are weekly markets in Las Américas and Los Cristianos, as well as some other little villages. They sell a wide range of souvenirs, but beware of pickpockets as they like to take advantage of the crowded areas.

On the high street in Santa Cruz, you can also find many big brands, sometimes at a slightly lower price than in the tourist areas.

Fish is a large part of the local diet with restaurants that allow you to choose a fish from their selection (often hand caught) which they will cook for you. Black potatoes called papas arrugadas are served unpeeled and covered in rock salt, ready to be dipped into a local sauce.

As in the rest of Spain, tapas are eaten a lot with local specialties including garlic sauces, refried beans and squid. Typical Spanish meals such as tortilla (potato omelet) and paella (rice dish with seafood) are common too.

The south is full of plenty of junk food restaurants with hamburgers, pizza, chips, etc. There are 15 McDonald’s including some on the beaches. Also note that in touristic hotspots such as Playa de las Americas, menus are available in numerous languages ranging from English, German, Russian and some Scandinavian languages, making it very easy to choose even if you are not familiar with the local dishes’ names or don’t understand Spanish.

Lots of Chinese Restaurants are also available in Tenerife.

In the tourist spots, there are also many up-market restaurants.

However, for those who want a taste of the culture, there are also lots of traditional Canarian restaurants. They do a variety of meats cooked on the barbecue, sometimes doing quite large portions.

Tenerife also has a reputation for the ‘booze scene’, with Playa de las Americas and Los Cristianos providing ample locations for those that enjoy 24 hour clubbing & drinking. The drinks available are the same as the rest of Europe (predominantly British) with prices being slightly less than those ‘back home’.

Tenerife is the island of eternal spring and the weather is beautiful all year round. Generally speaking, the weather is sunnier in the south and rather cloudy in the north.

Watch a video about Tenerife