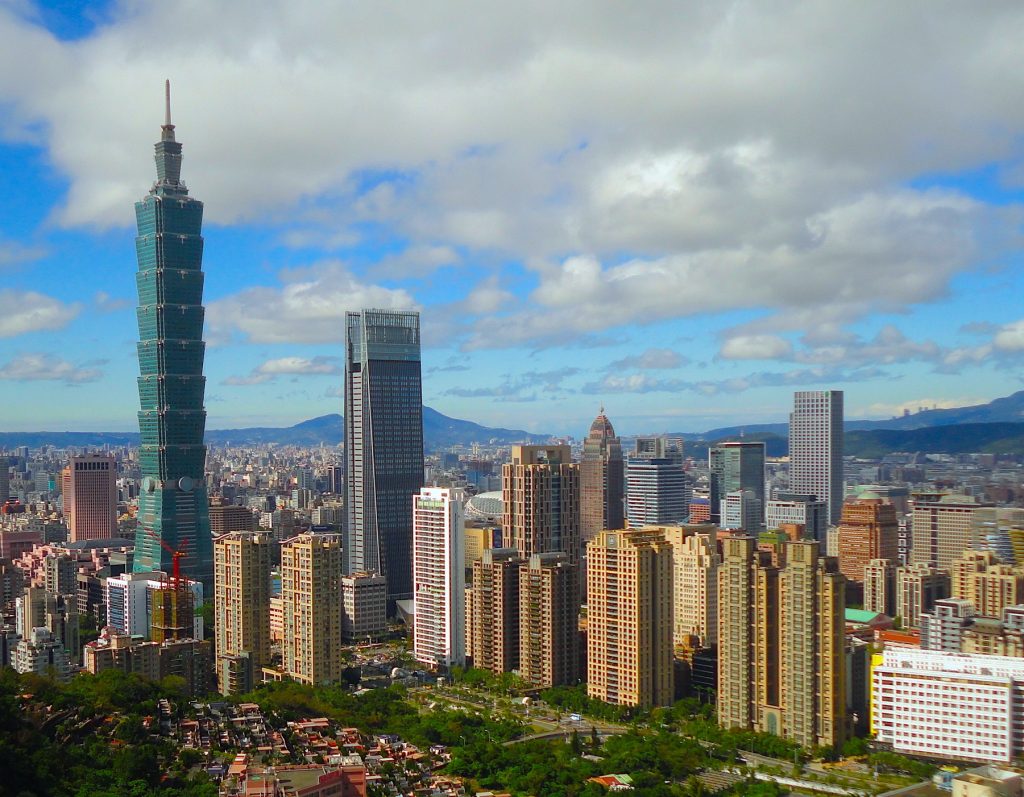 Explore Taipei the national capital of Taiwan. It is in the northern part of the island in a basin between the Yangming Mountains and the Central Mountains. It is, with 2.6 million inhabitants, the fourth largest administrative area of Taiwan, after New Taipei, Kaohsiung and Taichung. However, the Greater Taipei metropolitan area, which encompasses the central Taipei City along with the surrounding New Taipei City and Keelung, represents the largest urban cluster in Taiwan with nearly 7 million people. Taipei serves as the island’s financial, cultural and governmental centre.

In 1884, the Qing dynasty governor of Taiwan, Liu Mingchuan, decided to move the prefecture capital to Taipei, and with the construction of government offices and the influx of civil servants, Taipei’s days as a sleepy market town were over. Taipei remained the provincial capital when Taiwan was granted provincial status in 1885. As Taipei is in the north of Taiwan (the closest area to Japan), the city continued to thrive when Taiwan was ceded to Japan in 1895. However, as Japan was in the throes of a ‘modernize-come-what-may’ period, little regard was paid to Taipei’s traditional Chinese-style architecture and many of the old buildings, including the city walls, were demolished. On the other hand, several European-style buildings were constructed by the Japanese rulers – the Presidential Palace and National Taiwan University being among the most famous. The city’s architecture, however, suffered another major onslaught when the KMT government arrived from mainland China in 1945.

To cope with the influx of millions of mainland refugees, temporary housing estates sprang up all around the city. Later, these were replaced by Soviet-era style (or ‘no-style’) concrete apartment buildings. These buildings characterized Taipei’s landscape until very recently.

In the 1980s, Taiwan’s economy began to take off. Wages increased and in order to satisfy a wealthy and sophisticated market, Taipei began to change. Wide, tree lined boulevards were laid, high quality apartment blocks constructed and stylish restaurants and cafes established. The city was booming and has never looked back since.

The Taipei of today is a confident city of about 2.5 million inhabitants (about seven million including suburbs), and is characterized by its friendly people and safe streets. While it is not usually high on the list of tourist destinations, it is a fascinating place to visit and live. Furthermore, despite its size, Taipei does not have any rough areas that are considered unsafe, even at night – which in itself is attractive.

The downtown area is culturally divided into East and West. The West side, with its narrow streets and road side vendors, is considered the bastion of old Taipei life, whereas East Taipei, with its classy malls, chic boutiques, and stylish restaurants and cafes, reminiscent of those found in Tokyo, Paris or New York represents the city’s metamorphosis into a modern and international city.

Taipei has a humid subtropical climate that is heavily influenced by the east Asian monsoon. Winters are damp but pleasantly warm with temperatures between 20°C (68°F) and 13-14°C (56-57°F).

Taipei is a city of people from many different origins, and you can find a good mix of Chinese (people whose families migrated to Taiwan from 1949 onwards) and native Taiwanese (people whose families had been in Taiwan since the Ming or Qing Dynasties). While Mandarin is the lingua franca, and is spoken and understood by most people under the age of 60, other Chinese “dialects” are commonly heard as well. Among the native Taiwanese, while speakers of Minnan form the majority, there is also a significant number of Hakka-speaking native Taiwanese living in Taipei.

English is compulsory in all Taiwanese schools, and most people under the age of 40 will have at least a basic grasp of English, though few are fluent. Nevertheless, it goes without saying that learning some Mandarin and/or Minnan will make your trip much smoother.

What to see. Best top attractions in Taipei, Taiwan.

What to do in Taipei, Taiwan

What to buy in Taipei

Taipei probably has one of the highest densities of restaurants in the world. Almost every street and alley offers some kind of eatery. Of course, Chinese food (from all provinces) is well represented. In addition, Thai, Vietnamese, Japanese, Korean and Italian cuisines are also popular. Basically, East Taipei, especially around Dunhua and Anhe Roads, and also the expat enclave of Tianmu are where to clash chopsticks with the rich and famous, whereas West Taipei offers smaller, homey restaurants.

Due to the sheer number of restaurants, it is almost impossible to compile a thorough list, but below are a few recommended restaurants catering to specialist tastes.

Several night markets are located in each district. Some are open during daytime, and all are open until around midnight. Night markets consist of restaurants and stores at the permanent locations and little booths along the center. Every night market has a huge variety of food, so any night market you find is a good bet for good food. Because of the vast selection, the recommendation is to go with a few people and share the food. Vendor food is generally safe to eat, but use common sense though if you have a sensitive stomach!

The most famous one in Taipei is the Shilin Night Market. It is easily accessible via the MRT (red line) at either the Jiantan or Shilin stations. It has a large game section, and many food shops. Nearby are vendors, and haggling is appropriate here for non-food vendors, especially clothing. Also, they may raise prices for you if you don’t look Taiwanese. This is known as the most “touristy” night market, and shop owners generally can speak English.

Locals in Taipei view Shilin as touristy, with food catering to the tastes of mainland visitors. Another excellent option is Ning Xia Yeshi.

Gongguan Yeshi is located on the western side of Roosevelt Road across the street from National Taiwan University (Taida). When exiting Gongguan station (green line), use exit #1 and follow the sidewalk until you see stands lining the side-streets. This night market is closed on Wednesday nights. It is known for its variety of food, and for most shop owners knowing English due to the international student population at NTU.

Longshan Yeshi is a classic part of Taipei located at Longshan Station on the MRT blue line. It is home to “Snake Alley” and the famous Longshan Temple, which is one of the largest temples in Asia. Taiwan’s “red light district” is located nearby, and a number of the city’s homeless congregate here due to free food offerings from the temple. However, crime is extremely low so you should not be worried!

Raohe Yeshi is one of the “most Taiwanese” night markets within a few KM of downtown. It is one long road, and is known for its local foods and cheap socks.

Tamsui (Danshui) Yeshi is located at the farthest stop on the MRT, Tamsui Station at the northern end of the red line. It is known for its beautiful view along the river, its massive ice cream cones, and its fresh, affordable seafood.

Miaokou Yeshi is located in New Taipei City, specifically Jilong (Keelung). It is right next to the Keelung Harbor, and is known for its extremely diverse food offerings, including flavored ice, fried dough, and fresh seafood.

Lehua Yeshi is located off the MRT yellow line. It is in very Taiwanese territory. Few shop owners speak English, and the food is notably local.

Some of the best known night market snacks are:

Pizza is easy to find in Taiwan with major chains such as Pizza Hut and Domino’s. Besides the usual variety, Taiwan also has its localized variants e.g. seafood supreme, pepper steak, corn, peas etc.

Vegetarian food is also common fare, with the city boasting more than two hundred vegetarian restaurants and vendor stands. Another Taipei specialty is vegetarian buffets. They are common in every neighborhood, and unlike the ‘all-you-can-eat’ buffets, the cost is estimated by the weight of the food on your plate. Rice (there is usually a choice of brown or white) is charged separately, but soup is free and you can refill as many times as you like. Note that many of these veggie restaurants are Buddhist in nature and so meals do not contain garlic or onion (which traditionalists claim inflames passion).

Food Tours are an excellent way to experience a variety of local foods. They are usually lead by multi-lingual guides familiar with the local traditions. Foreign visitors will visit local more authentic eateries that might be otherwise difficult to discover and navigate.

Taipei Eats, Recommended for those visitors who want to get away from the usual tour routes and explore some of the local’s favorite foods.

Nothing is better on a hot and humid Taipei day than a refreshing glass of juice made from a huge assortment of fresh fruit!

While traditionally a nation of tea drinkers, in recent years the Taiwanese have really embraced the cafe culture and all the usual chains can be found here in abundance. For cafes with more character, roam the back streets near National Taiwan University between Xinsheng South Road and Roosevelt Road. More cafes are located in the area around Renai Road, Section 4 and Dunhua South Road. There are also some interesting and characterful places between Yongkang Park and Chaozhou Street, and in the alleys around Shida Road. However, for a particularly impressive range of styles, visit Bitan in Xindian, where all the cafes offer restful views over the river and mountains beyond (though can be noisy at weekend).

Internet cafes are plentiful, especially in the maze of alleys between Taipei Main Station and Peace Park. However, you may have to wander around (and look up and down as many are on higher floors or in the basement) before finding one. Some computers are coin operated. Internet cafes are known as wang-ka in Chinese (a combination of wang, the Chinese word for ‘net’, and ka an abbreviation of ‘cafe’.)

City of Taipei offers free Wi-Fi service in many public locations and some of city buses called TPE-Free. Registration is required. If you have mobile phone from selected countries it can be done online; or otherwise, bring your passport to the visitor information centre, and the friendly staff will do it for you. This account can also be used for the nationwide free W-iFi called iTaiwan.

There is also a city-wide Wi-Fi service called Wifly. For a small fee, you can buy a card that gives you unlimited internet access nearly anywhere in the city for a day or a month.

Watch a video about Taipei