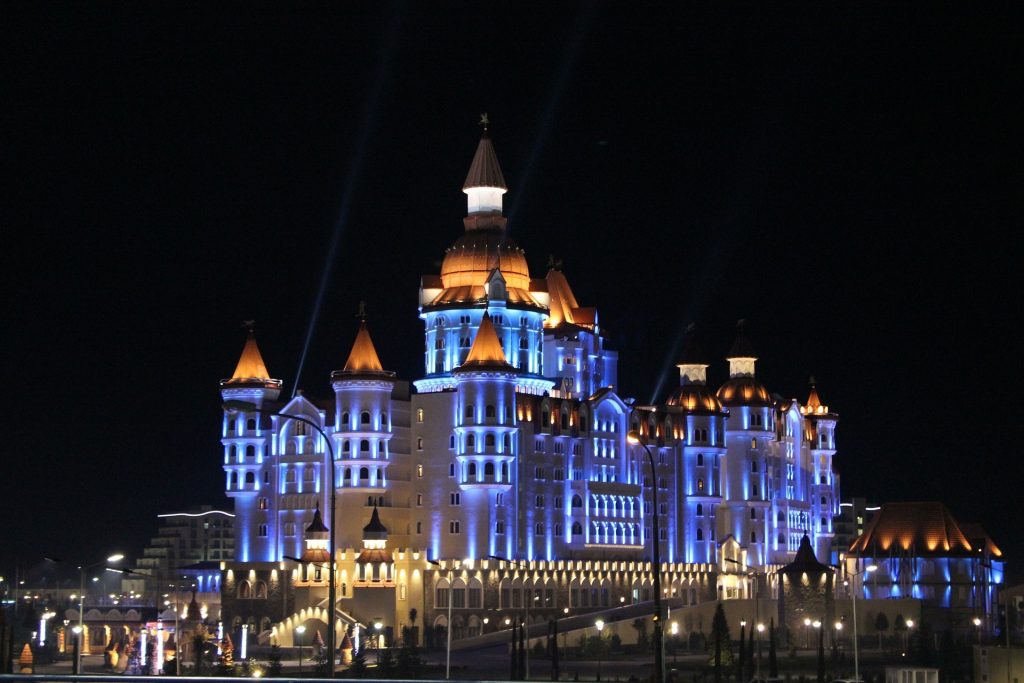 Explore Sochi one of the southernmost places of Russia and the second-largest city of Krasnodar Krai, with a population of 415,000. Located along the Black Sea coast, it’s about 1,600km (995 mi) south of Moscow.

Sochi is often called the unofficial ‘Summer Capital’ of Russia, or the Black Sea Pearl. This is the country’s biggest and busiest summer sea resort, attracting more than four million visitors annually with its amazing mountainous coastline, endless shingle beaches, warm sunny days, and bustling nightlife. From May to September Sochi’s population at least doubles with tourists, including celebrities and the political elite of the country.

Strangely, only three percent of this visitors’ crowd are international travellers, and even the frontier location of the city doesn’t help to change the situation. Maybe the most famous non-politician foreign visitor of Sochi was Bono, who was invited to spend some time at President Medvedev’s residence in 2010. But, in general, the city remains a very domestic destination, somewhat lacking in appropriate international infrastructure and having the same language barrier most regional centers of Russia do.

Sochi became world-known in 2007, when it won the bid to host the 2014 Winter Olympic and Paralympic Games.

Sochi has many attractions to offer for anyone who loves nature, sports, history, and sunny beach leisure.

The territory of today’s Sochi was inhabited for thousands of years, populated by Caucasian mountainous tribes and being under the influence and dominion of ancient Greek, Roman, Byzantine, Abkhazian and Ottoman civilizations. A few landmarks of antecedent civilizations remained, including the Bronze Age table-stones and medieval Byzantine temples.

The Russian Empire approached these lands in the beginning of 19th century, and after a war with the Ottoman Empire acquired them in 1829. Soon after that, in 1838, Russian authorities established the fort of Alexandria, at the site of modern Central Sochi, and 2 more forts in the modern Lazarevskoe district of the city. Alexandria was renamed several times and finally obtained the name Sochi (by the name of a local river) in 1896.

Sochi belongs to that tiny part of Russia, which is happily located in the subtropical climatic zone. In contrast to Mediterranean climates. Despite high precipitation, Sochi enjoys 300 sunny days annually, which is unbelievable for any other part of Russia except the adjacent Krasnodar Krai coastal cities. This makes nearly all the year comfortable for visiting Sochi, except maybe November through January.

Within Central Sochi most distances are walkable, with some regard to hilly landscape and appropriate physical efforts needed (take into account that the big volume of construction prior to 2014 Olympics has made some walks less suitable). Other districts of the city have significant spaces between their parts, so it’s better to use some transport.

What to see. Best top attractions in Sochi, Russia.

Krasnodar Krai is probably one of Southern Russia’s most safe regions. Sochi does not stand out with the higher crime rate, but standard safety precautions should be used. There is a saying in Russia: “Nights are dark in Sochi” and this can be explained as that anyone or anything can get lost in the city.

A little outside of Sochi

Once a flourishing sea resort autonomy and a part of Soviet Georgia, this mountainous Caucasian republic passed through a bloody civil war with Georgians after the Soviet Union collapse, proclaimed its independence and was supported by Russia, but yet unrecognized by most countries. Honestly loved by many Russian tourists, Abkhazia is undeservedly mostly unknown by travellers from other parts of the world.

Abkhazia is quite small and can be quickly discovered within a weekend, but longer stay is certainly needed for deeper impressions. The monastery and the cave at New Athos, as well as Lake Ritsa, are definitely among most amazing places at the Black Sea. This breathtaking beauty mixed with Abkhazian poverty and the remains of the civil war will leave no one indifferent. Locals are very friendly, but only few of them will understand anything in English.

Sochi is the only place with Abkhazia border crossing possibility from Russian side. There is a crossing point at Vesyoloe (southern part of Adler district). It can be crossed both by foot and by car/bus (two separate bridges through the border Psou river). Coming to Abkhazia by foot, you will find a marshrutka parking right after the bridge – a cheap opportunity to reach any key destination of the country. The Abkhazian capital Sukhum is also reachable by a direct bus from Sochi, and a commuter train (elektrichka) is planned to start operate in 2011. There is also option to get to Gagra, Abkhazia by boat from Sochi port.

Going to Abkhazia be prepared to comply with Abkhazian visa requirements. Be also aware that, to return back to Russia after a trip, you may need double-entry or multi-entry Russian visa.

A fully enclaved into Krasnodar Krai small national autonomy, neighboring to Greater Sochi, Adygea has a significant tourist potential, which is underestimated by the moment. Rafting, waterfall seeing, trekking and other mountain activities in front of awesome Caucasus views make this destination very promising. It is also important that Adygea is safer than any other Caucasian region except Krasnodar Krai.

Maykop, the capital of Adygea, is accessible from Sochi by train (daily, 6 hours) and bus (1-2 daily plus transit buses, 8 hours). There is also an option to reach Adygea by car (6-8 hours via Tuapse). An extreme alternative to that is the mountainous unpaved direct road connecting Sochi with Adygea via Caucasus ridges. Be more than careful using it.

This natural reserve has the second-largest protected area in Europe and the largest one in Caucasus Mountains. It occupies the mountain ridges of Krasnodar Krai, Adygea and Karachay-Cherkessia, including part of Greater Sochi metropolitan area (Khosta district and Krasnaya Polyana), bordering Sochi National Park.

Caucasian Biosphere Reserve is the richest biodiversity treasury, having no equivalents in Russia and an international value as a piece of untouched nature with primeval habitats. Reasonably, this unique area is included into the UNESCO World Heritage List. The official site of the reserve is available in Russian only.

In Sochi you can get the permit at the reserve’s headquarter: Karl Marx street, 8, room 10, Adler district, Sochi.

A resort town located at the Black Sea coast to the north-west from Sochi, one of the most popular domestic summer destinations of Russia. Gelendzhik has both natural and leisure attractions. Gelendzhik’s aquapark is the largest in the country, and its surroundings have very beautiful scenery. The town is home to International Sea Aviation Conference, which is conducted there each two years.

This Krasnodar Krai’s 3rd largest city is the biggest Russian port at the Black Sea and the main cement industry center in Southern Russia. The majority of the city’s tourist attractions are related to the Second World War, when Novorossiysk was among Russian key battlefields. The most known memorials are Malaya Zemlya, Defence Line (Rubezh Oborony) and Death Valley (Dolina Smerti).

Novorossiysk’s vicinities have beautiful nature of Caucasus foothills. On the top of local natural wonders is the amazing Abrau lake, the biggest one at Northern Caucasus. Just nearby the wine manufacture of Abrau-Dyurso is located, making this place the capital of Russian champagne / sparkling wine (tours to Abrau-Dyurso with wine testing are available). There are also several smaller beach resorts around the city.

There are several ways to get from Sochi to Novorossiysk. Buses go daily (8.5 hours). Sea Flight speed ferry connection operates from May to October, 3 times a week (Mondays, Wednesdays and Fridays). One-way ride will cost 1,800-2,700 RUR, taking about 5 hours. It is also possible to get to Novorossiysk by train via Krasnodar.

Another important Russian port at the Black Sea and the closest neighbor town bordering Greater Sochi. This is mostly industrial and transport hub, attracting fewer number of tourists, than other Russian Black Sea coastal locations. But anyway, Tuapse is good for a single-day trip from Sochi. After a look at the downtown, the awesome surroundings should be visited. There are several very scenic cliffs around, the top of those is Kiselev’s Rock, a 46 meter upright cliff breaking down into the sea. Quite many ancient cultural remains, such as table-stones, are also located around Tuapse.

Any elektrichka or long-distance train from Sochi stops in Tuapse, the frequent bus/marshrutka connection is also available. Expect 2 – 2,5 hours for one-way trip from Central Sochi.

Watch a video about Sochi