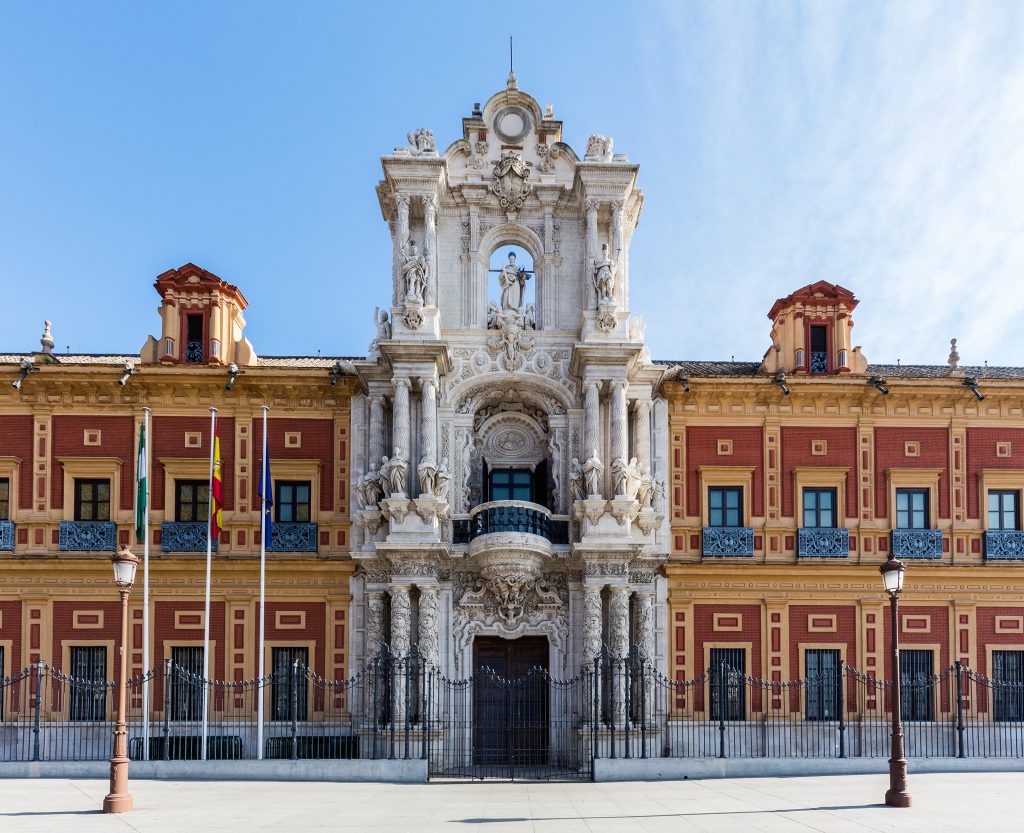 What to see in Seville, Spain

The Cathedral of Seville was once judged the third largest church in the world after Saint Peter’s in Rome and Saint Paul’s in London, it is now arguably the largest church in the world when compared using the measurement of volume. Seville’s fifteenth century cathedral occupies the site of the former great mosque built in the late twelfth century. The central nave rises to an awesome 37 meters over a total area of 11,520 square meters. The Cathedral is the final resting place of the remains of Christopher Columbus. Admission includes access to the La Giralda tower.

La Giralda is a large and beautiful minaret tower, originally intended for the chief mosque, but now is the magnificent bell tower of the Cathedral and a symbol of Seville. Climb the 34 ramps for a great view of the city. Admission includes both the cathedral and the tower.

The Real Alcázar is a beautiful palace in Mudéjar (Moorish) style, built in the XIV Century by Pedro I the Cruel. With its myriad rooms, extravagant architecture, lavish gardens with many courtyards, ponds and secrets to be explored, it is a fascinating place to visit. Be sure to check out the room where Christopher Columbus’s journey to the Americas were planned. You can see his coat of arms embroidered on the wall along with many other royals. In the heat of summer it offers a cool retreat from the suns glare and can quite easily keep you occupied for a few centuries, if not all of your life. Disabled people and visitors under the age of 16 get in for free. You can buy your ticket online for the following day to skip the lines, which are often quite long. To see the Upper Palace with an audio guide, you have to pay admission. It is generally recommended to book at least a half day in advance to see the upper floors, as those tickets are available in limited numbers and sell out hours in advance. During the high season, they can sell out a week or more in advance. Open Mon-Sun, April-September: 9:30-19:00 and October-March: 9:30-17:00, Closed 1 Jan, 6 Jan, Holy Friday and 25th Dec. Free entry on Monday from 1800 to 1900h.

Palacio de Las Dueñas, calle Dueñas 5. Timming: M-S 10:00-8:00 pm (april to september), 10:00-6:00 pm (october to march). A palace belonging to the House of Alba. It was built in the 15th century, with Renaissance architecture style and Gothic-Mudejar influences. The palace is one of the major historic homes in the city. The poet Antonio Machado was born here in 1875. It is also said that Amerigo Vespucci married in this chapel at the beginning of the 16th century. The Palace has a great collection of paintings (Ribera, Luca Giordano, Neri de Bicci), ceramics, antique furniture and other decorative arts, sculptures of Ancient Rome and contemporary (Mariano Benlluire), Flemish tapestries (Willem de Pannemaker), mosaics, and many other pieces of art.

The Jewish Quarter (Barrio Santa Cruz) is located around the Cathedral. It is filled with small winding streets and is generally regarded as the most charming part of the city, but it is also fairly touristy.

The Hospital de los Venerables, Plaza de los Venerables. A 17th century retirement home and hospital for aged and sickly retired priests, recently restored by the Fundación to preserve an example of Andalusian architecture at its very best. Includes a resplendent Baroque chapel which is highly recommended.

Torre de Oro is a thirteenth century tower built by the Almohades. It now houses the local maritime museum. Free on Mondays. 10am-2pm.

Parque María Luisa was built for the 1929 Iber-Americano World’s Fair and now is landscaped with attractive monuments and museums.

Plaza de España is the site of the Spanish pavilion from the 1929 exhibition. In more recent years it was used in the filming of the new Star Wars episodes. It is somewhat in need of repair. Visit it early in the morning on a weekday to see a long line of immigrants outside one of the government offices it now houses, or visit it right before it closes (officially at 10PM but likely half an hour later) to see it completely empty and rather eerie.

Universidad de Sevilla was once the Tobacco Factory of Seville and was constructed between 1728 and 1771 by Sebastián Van der Bocht. Over the main entrance, the triangular facade ends in a statue of La Fama (fame). The tobacco factory was then the largest industrial building in Spain. A monopoly assured high income, which is reflected in the factory’s architecture and surrounding Gardens. Its chapel and prison complement the main building. In the interior you find impressive stairways, fountains and Patios. It was the setting for the first act of Bizet’s opera Carmen. In 1953 the factory was converted into the main building of Seville University. Just behind the tobacco factory, the  María Luisa park borders the historic center of Seville to the south.

The Palacio de la Condesa de Lebrija (The Lebrija Palace), (Calle Cuna). Mo-Fr 10:30-19:30 (Jul/Aug: 09:00-15:00), Sat 10:00-19:00 (Jul/Aug: 10:00-14:00Uhr), Sun 10:00-14:00 (Jul-Aug: closed). The palace is considered the “best paved house-palace in Europe” owing to its collection of roman mosaics, which paved practically the whole of the ground floor. There is also a collection of well parapets, vases, amphora, columns and sculptures of incalculable worth. On the upper floor you can visit the residences previously inhabited by the Countess and her decedents, up to only a few years ago; extremely well preserved, they are today filled with ornaments and furniture from all over the world, priceless artwork by Van Dyke, Bruegel, Alonso Cano, amongst others, as well as collections of porcelain and glass. If you want to see the upper floors, arrive earlier in the day, or book the day in advance, because the upper floors are only accessible on a limited number of tickets for guided tours.

Casa de Pilatos. A sixteenth century palace and generally thought to be one of the best in the city. Free after 1PM on Tuesdays.

Palacio de Arzobispal. Located in the historical section of the city and is home to various clergy and the Archbishop. On the outside you only can catch a glimpse of the patio but on the inside there are important works of art.  edit

Italica, Av. Extremadura 2, Santiponce. A partially excavated Roman city, candidate to be declared a UNESCO World Heritage Site, only a 15 min ride from Seville. Most of it is lost under the village of Santiponce, but several streets and the footings of houses and public buildings with mosaic tiled floors can be seen. The highlight is one of the largest known Roman amphitheaters with seats for 25,000.

The Museo de Bellas Artes, Plaza del Museo, 9. Open Tu 3PM-8PM, W-Sa 9AM-8PM, Su 9AM-2PM, closed Mon, free entrance for EU citizens. Considered by some as the second most important fine arts museum in Spain after the Prado in Madrid. The museum building is a former mercy convent renewed in the 17th century and the fifteen exhibition rooms show a comprehensive picture of Sevillian art from the Gothic period to the early trends of the 20th century. The square just outside hosts an open-air art market on Sundays until around 1:30PM. Plenty of original paintings on local topics, although some not so interesting bits as well!

Museo del Baile Flamenco, Cristina Hoyos’ Flamenco Dance Museum offers an experience for all the senses with ambiental music, videos, touch-screens and artifacts to be found in this 18th Century building at the heart of the historical Barrio Santa Cruz. On Friday and Saturday evenings a spectacular show is hosted at a discounted price for visitors to the museum at 19:03. Flamenco art and photography exhibitions are also on display as well as offering dance, singing, percussion and guitar lessons. Open all day every day from 09:00 – 19:00. Address: Museo del Baile Flamenco, C/ Manuel Rojas Marcos 3, 41.004 Sevilla

Archeology Museum, It has one of the best collections of Roman-era artifacts in Spain, brought from nearby Italica.

La Casa de la Ciencia – Science Museum, Seville, and the museum is housed in the Peruvian Pavillion, a buidling designed by architect Manuel Piqueras Cotolí and winner of the 1929 Ibero-American Exposition. Worth the visit just for the Incan architecture, the museum currently has three permanent exhibits open to the public: Invertebrates of Andalusia, Geology of Seville, and A Sea of Cetaceans in Andalusia. The museum also contains Seville’s only planetarium. OpenTue-Sun 10am-9pm. Address: Pabellón de Perú, Avenida de María Luisa s/n, 41013, Sevilla.

Seville Aquarium, the aquarium offers the visitors a tour through 35 displays that allow them to learn about the flora and fauna that Magellan encountered during his journey back in 1519 when he was pursuing an alternative route to reach the Spice Islands. With more than 3,000 cubic meters of water, over 400 marine species and more than 7,000 specimens, the Aquarium portrays what Magellan experienced in his two year voyage. The visitor’s own journey follows a 700 meter path and it lasts about an hour and a half. The main attraction is one of the biggest tanks of sharks in Europe, which contains two million liters of water and a 9 meter deep cascade. Open 365 days. Address: Muelle de las Delicias, Área Sur. Puerto de Sevilla, 41012, Sevilla.

Centro de Interpretacion Juderia de Sevilla – A place dedicated to the Jewish-Spanish tradition and to the Sephardic memory. An Exhibition about the Jews who inhabited the Santa Cruz neighborhood and the changes in the quarter from the Middle Ages until now; about the Sephardic women, from here and from the Diaspora; about how they kept their culture through habits and customs, songs, proverbs, tales and fables. Open: Monday to Saturday 10:30 to 15:30 and from 17:00 to 20:00; Sundays from 11:00 to 19:00. Address: 22A Ximenez de Enciso, Sevilla