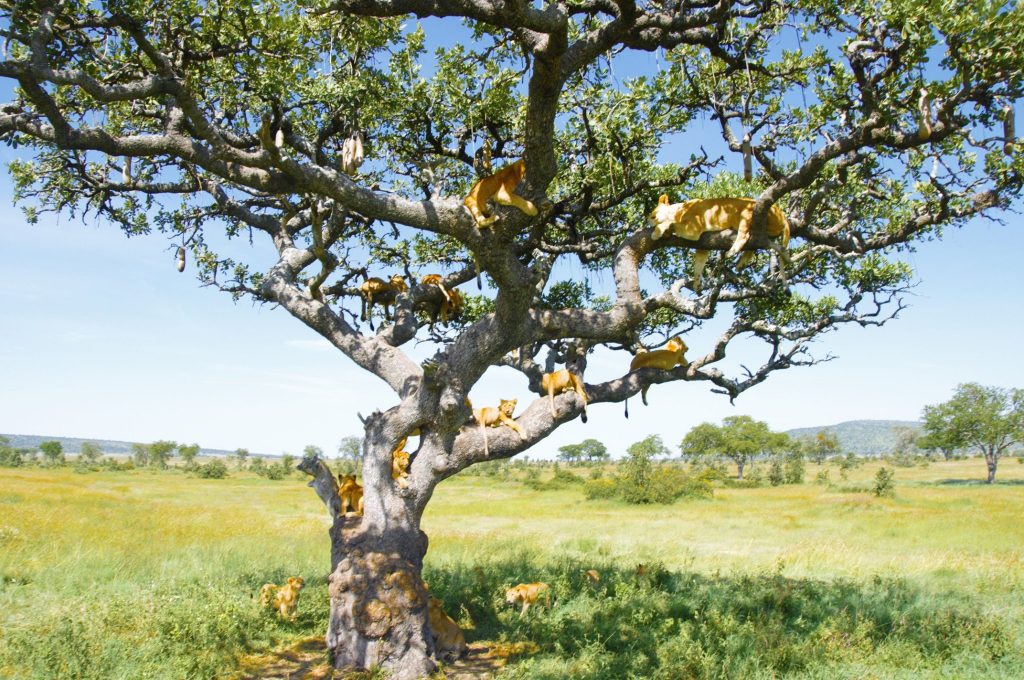 Explore Serengeti National Park, a large conservation area located in the north of Tanzania. The park flows over into neighboring Kenya where it’s known as the Masai Mara.

The park is but one of several conservation areas within the Serengeti region of East Africa, though a vitally important one. As well as conserving wildlife, flora and iconic landscapes, Serengeti National Park has emerged as a major traveller and tourist destination, many making the journey there to engage in safari. The name Serengeti comes from the Maasai language, meaning ‘endless plains’.

Two World Heritage Sites and two Biosphere Reserves have been established within the 30,000 km² region. The Serengeti ecosystem is one of the oldest on earth. The essential features of climate, vegetation and fauna have barely changed in the past million years. Early man himself made an appearance in Olduvai Gorge about two million years ago. Some patterns of life, death, adaptation and migration are as old as the hills themselves.

It is the migration for which Serengeti is perhaps most famous. Over a million wildebeest and about 200,000 zebras flow south from the northern hills to the southern plains for the short rains every October and November, and then swirl west and north after the long rains in April, May and June. So strong is the ancient instinct to move that no drought, gorge or crocodile infested river can hold them back.

Wildlife viewing in the Serengeti Ecosystem with its Great Migration is tremendous! Nowhere on earth is there a sight rivaling the spectacle of 1.5 million hoofed animals on the march. White-bearded wildebeest, zebras and gazelle migrate annually during the great migration from the plains of the Serengeti National Park in Tanzania to the grasslands of the Maasai Mara in Kenya in search of fresh grass. Serengeti has the highest concentration of large mammals on this planet and is famous for its 2,500 lions, the highest concentration found anywhere! Unlike in Kenya (and with the exception of the Ngorongoro Crater), you rarely see other tourists or vehicles on a game drive in the Serengeti National Park.

Wild animals can be dangerous and you should not wander off on your own, especially at night, while on safari (in Swahili simply means “journey”). However most animals are rather frightened by humans and will flee instead of attacking unless cornered or provoked. Keep a sensible distance and treat them with respect.

Early and late daylight hours are usually the best times to observe the more than 518 species of birds which have been identified in the Serengeti. Some of them are Eurasian migrants who are present in the European winter months from October to April.

The Serengeti falls into the classic bimodal rain pattern of East Africa. The short rains are concentrated in November/December, the long and heavier rains in March – May. Mean monthly maximum temperatures are relatively uniform throughout the year being constant around 27 to 28 degrees centigrade at Seronera.  At Ngorongoro Crater the nights can be very chilly due to altitude.

The nearest international airport to the Serengeti is Kilimanjaro Airport near Arusha.

Park fees can be very expensive in Tanzania. If you book your trip through a travel agent they are generally included in the overall trip cost. In Serengeti National Park and Ngorongoro Conservation area the park fee is US$ 50 per person per day, for camping US$30 per tent per day and US$ 30 per vehicle per day. There is a number of definite “don’ts” in the Serengeti. These include approaching too close and disturbing animals, making an unacceptable noise, picking flowers or destroying vegetation, discarding litter, exceeding 50km/h speed limit, bringing pets or firearms into the Park, and going off the roads within 16km of Seronera.

From December to May, depending on the rains, the large herds are concentrated on the low lying grass steppe between Olduvai, Gol, Naabi and Lagarja. A base on Lake Masak or Lake Lagarja is then ideal because one can travel from there in all directions. Day excursions take one into areas that are little known so that you can enjoy in peace an animal paradise: for example hidden Valley, the Soito Ngum Kopjes or the Kakesio Plains. You will enjoy the freedom of travelling cross country in order to be able to find the best places and thus have the chance to see rarer animals such as honey-badgers, wild cats, porcupines. In the right season, Southern Serengeti is not to be surpassed.

Moru Kopjes and Seronera, Central Serengeti. Here the savanna animals are joined by species that have adapted to living in the rocky cliffs. From here, or whilst in transit, you visit Seronera in the centre of the park searching for rare leopards and cheetahs. You can also enjoy the ever changing landscape with gallery forests, kopjes and water holes.

Lobo, North Serengeti. The North Serengeti is very different from the grassy plains in the South. As there is always water present the big herds retreat there in the dry season. In addition there are many species that live here permanently and you will also fairly regularly see elephants. A world for itself are the Bologonja Springs on the border to Kenya. The ‘Corridor’, West Serengeti

This is a special area which is seldom offered on safari tours. Long distances, poor communications (few vehicles are equipped with a radio) and the frequently difficult road conditions still keep away most visitors from this part of the Serengeti which stretches almost as far as Lake Victoria. An important aspect of the Serengeti is therefore lost to them. This area is very different from the other main zones of the park. In the dry season large stretches of the route westward can be practically empty of animals. The last quarter of the route is however ideally suited to be the home for thousands of animals the whole year round. Gnus and zebras who are resident here do not join their migratory relatives who pass through every year on their way northwards. Big herds of giraffes, buffalo, eland, topis, kongonis, impalas, waterbuck and Thompson’s gazelles live here together with them. All the big cats and hyenas are present in a good number as well. The end of May through August is the time to view the annual migration of zebra and wildebeest in Western Serengeti. This is also the rut season for wildebeest and the plains are noisy with male wildebeest defending their temporary territories. A special attraction, that has become quite famous, is the crocodile population of the Grumeti River. This is particularly large at Kirawira, where the river does not dry up. The time spent at this life-giving water source can be among the most inter-esting. Here there are not only crocodiles and hippos to observe but also a large number of varieties of birds. Those tourists with a lot of time (or luck) will be able to discover the Black and White Colobus monkey in the crowns of the trees. On the wooded savannahs of the Ndabaka plains there is always something to see. You will always feel at peace at the calm pools and mysterious “korongos”. During your excursions in this least visited part of Serengeti, you can stay at the most luxurious and exclusive camp near Kirawira, the “Kirawira Serena Camp”, at Conservation Corporation’s “Grumeti River Camp” (also very exclusive!) or at the cheaper, but good and charming new Speke Bay Lodge right on the shore of Lake Victoria (4 km outside the park, an hour’s drive from Kirawira). Mbalageti Serengeti Mbalageti Serengeti is also in the Western corridor and offers an unparalleled view over the vast plains due to its stellar location.

What to do in Serengeti National park, Tanzania.

Take photographs! A good zoom and a large memory card make the results so good you’ll be looking at the photos months and months later. (Save them on high quality image and you can do amazing things with your photo program when you get home!)

Take a balloon safari which will give you best views.

Shopping in the Serengeti naturally is extremely limited due to the absence of human settlements. In Arusha, however, and other major towns you will find curio markets where you can buy all sorts of carvings, masks, Maasai spears, textiles, drums, tinga-tinga paintings, batik work, silk shawls, locally made jewelry, coffee, etc. The Arusha Heritage Centre offers a large variety of souvenirs and crafts. Also, The Sayari Camp had arrangements with locals to supply a little “gift shop” and the money goes right back into local programs.

Most visitors are surprised by the quality and the variety of the food available on safari. No matter whether you are staying in a lodge, a tented camp or a mobile safari camp, you will be served freshly prepared food according to international tastes and standards. Bottled water can be purchased at all the lodges and camps and is provided by all Safari Operators. Nonalcoholic drinks are often included in the all-inclusive rates. It is wise to stick with bottled drinks.

Health care is limited in the region, but if you have a problem seek help with your lodge. For more serious emergencies, you may end up in Nairobi, or being evacuated to your home country.

Watch a video about Serengeti