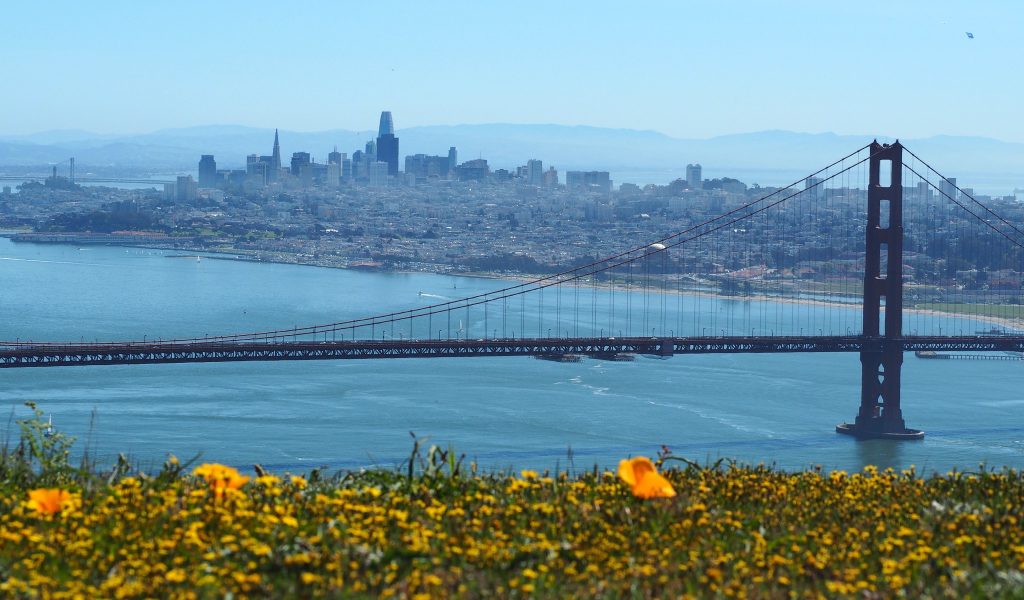 Explore San Francisco a major city in California, the centerpiece of the Bay Area, well-known for its liberal community, hilly terrain, Victorian architecture, scenic beauty, summer fog, and great ethnic and cultural diversity. These are only a few of the aspects of the city that make San Francisco one of the most visited cities in the world.

Prior to European settlement in the area, the peninsula that now contains San Francisco was home to the Yelamu tribe, who were part of the larger Ohlone language group which stretched south from the Bay Area to the Big Sur of California. Due to San Francisco’s characteristic foggy weather, the earliest European explorers completely bypassed the Golden Gate and the San Francisco Bay.

The first European settlement in the area was founded by the Spanish in 1776 as a mission community surrounding the Mission San Francisco de Asís, in what is today called the Mission Dolores in the Mission District. In addition to the mission, a military fort was built near the Golden Gate: El Presidio.

San Francisco has a mild climate, with cool, wet winters and dry summers.

San Francisco International airport is located about 16km south of the city is a major international airport, one of the largest in the world and has numerous passenger amenities including a wide range of food and drink establishments, shopping, baggage storage, public showers, a medical clinic, and assistance for lost or stranded travelers and military personnel.

What to see. Best top attractions in San Francisco, Usa

Many museums offer free admission on certain days during the first week of every month.

One of the best ways to see San Francisco is from the waters of San Francisco Bay. There are many companies offering harbor tours of varying durations and prices but they all provide marvelous views of the bay, the bridges, the island of Alcatraz, Angel Island and the city. Only specific island tours are allowed to land at Alcatraz, but the typical harbor tour will circle the island at a slow crawl, giving you plenty of opportunity to photograph the now-inactive prison from the water.

Also consider taking a ferry from San Francisco across the bay to Tiburon, Sausalito, or Alameda. Same views for a fraction of the price.

Most tours leave from docks at Fisherman’s Wharf near Pier 39 (Pier 33 for Alcatraz). Tickets can be purchased at kiosks along the waterfront walk. Buy tickets a day or two in advance during the summer high season. For Alcatraz island tour, you may need to book weeks in advance (but you can also buy waitlist tickets – if there’s spaces left you get on, if not you get a full refund). It’s well worth it though – you get an extensive audio tour of the prison, with stories of various escape attempts.

Boats usually leave roughly hourly starting around 10am and ending around 5pm. Multi-lingual guides are available on some tours. Prices range from $20-$40, more for sunset, dinner, or whale watching tours.

Even on a sunny day the bay can be chilly, so be sure to bring a sweater as well as sun screen.

Some boats have snack bars on board, but bring your own water and treats to avoid paying high costs or going without. There are now limited refreshments and a souvenirs shop on Alcatraz.

If you want it, chances are likely you can get it in San Francisco. There are a wide range of small and locally owned businesses throughout the city’s neighborhoods; in fact, San Francisco has for the most part repelled the development of large chain retailers and big box stores that are common across America.

If it’s tourist trinkets you’re looking for, Fisherman’s Wharf has the typical souvenir, T-shirt, and camera shops, along with plenty of specialty stores. However, San Francisco’s most popular shopping area is Union Square, which has all the big national department stores (Macy’s, Saks, Nordstrom, etc.) and plenty of fancy boutique stores, as well as a few shopping centers thrown in.

For small, upscale boutiques, Union Street, Hayes Street around Octavia, Fillmore Street around California Street, and Chestnut Street in the Golden Gate area are lined with unique and trendy places, and all these streets are among the best spots in the city to window shop and nash. Nob Hill is also full of specialty places.

But if you don’t have a luxury dollar to spend and still want to walk away with something unique, there are plenty of shops in Chinatown for you, selling Oriental handicrafts of all descriptions, and no chain stores in sight. Japantown also offers plenty of great shops selling authentic souvenirs, including the excellent Kinokuniya Stationery/Bookstore. The Haight is full of excellent independent record and book stores, with Amoeba Music dominating the scene.

For basic supplies, try the ubiquitous 7-Eleven convenience stores and Walgreens pharmacies. If you need groceries, Safeway is the dominant supermarket chain in the city. There are Safeway stores in SoMa, near Fisherman’s Wharf, and near the Financial District, but not near Union Square. The closest supermarket to Union Square is the upscale Bristol Farms supermarket at Westfield San Francisco Shopping Centre.

What to eat and drink in San Francisco

San Francisco prides itself on its openness to diversity in race, gender, sexual orientation and personal style. This trait is widely considered to be one of the defining features of the city, and it draws both visitors and transplants alike.

Smokers beware: as in the rest of California, smoking is illegal in bars, restaurants, and other public places. Bay Area people can be particularly vocal about your personal habits. Be aware of nonsmoking areas, and try to be courteous about smoking in other places. They will probably not bother you about standing and smoking outside a restaurant or bar.

Bikes can be rented from around the northern waterfront (Pier 41/Fisherman’s Wharf/Aquatic Park area) or near Golden Gate Park for trips to Marin County via the Golden Gate Bridge. Stanyan near Haight at the end of the park has several good shops. Golden Gate Transit also sporadically serves the North Bay from San Francisco, and has bike racks on most buses.

Watch a video about San Francisco