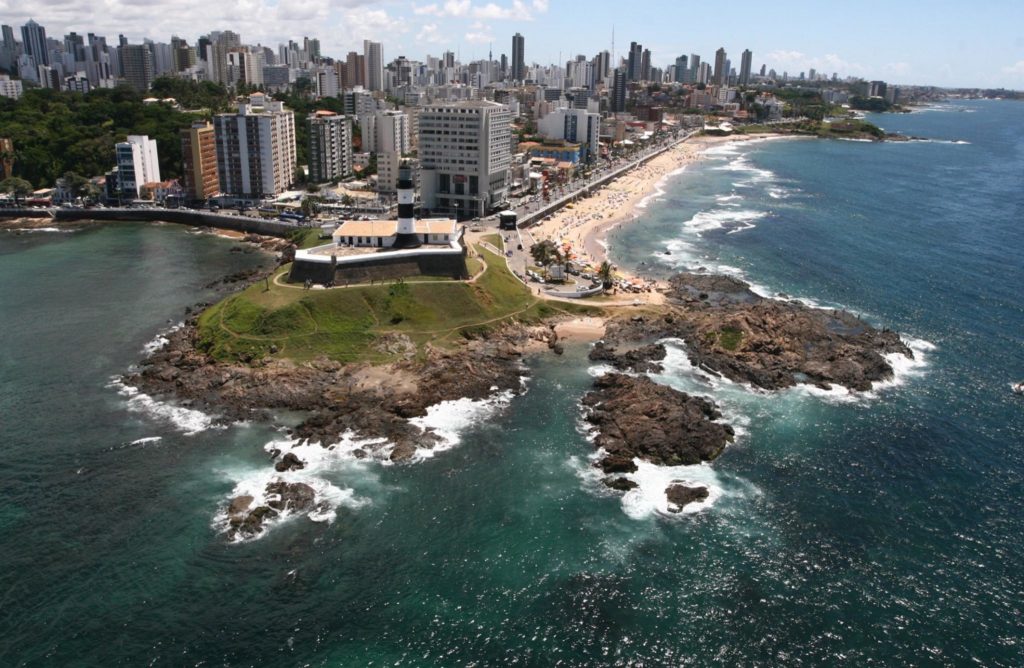 What to see in Salvador, Brazil

At the center of the Cidade Alta there are the 2 large squares Praça da Sé and the Terreiro de Jesus which are connected at the corner by the cathedral. The latter is probably the liveliest part of town, with food carts and stalls through the day and revelers in the evening hours. The slick, L-shaped Praça da Sé has cool fountains and the fenced-off ruins of the foundations of its namesake church. At the far end of the plaza, the 1874 funicular railway Plano Inclinado Gonçalves used to send 30-passenger cars between Cidade Alta and Cidade Baixa on terrifyingly steep tracks – it’s been out of service since 2011, though plans to restore the train are in the works. A colorful intersection of vendors, tourists, capoeiristas and colorful locals, the Terreiro de Jesus is a historic site of religious celebrations, and is ringed by four churches, as well as the XIX century Faculdade de Medicina Building . The plaza feeds into the Cruzeiro de São Francisco , named for the cross in the square’s center.

Largo do Pelourinho — A fairly small triangular plaza, is among the oldest parts of town. You can guess from its name meaning “plaza of the pillory” what went on around there.

Mercado Modelo — The city’s main market located in the lower town is and a good place for crafts and other souvenirs. In the adjacent square you can often see young men performing capoeira, the famous martial arts dance which originates from the area.

Solar do Unhão — The best place in Salvador to watch the sunset. It is an old style house located at the Baía de Todos os Santos. Inside there is a small museum (Museu de Arte Moderna) with local art pieces. Sometimes on Saturday evening there is a jazz concert.

Forte de Santo Antônio da Barra. is Bahia’s oldest fort was built in 1698. In addition to having superb views, the fort houses an excellent nautical museum, with relics and displays from the days of Portuguese seafaring. As you catch the sunset here – from the grassy ledge behind the fort or from the museum’s gorgeous terrace café – realize that Salvador’s peninsula is the only location in Brazil where the sun appears to set over the ocean.

Elevador Lacerda, Rua da Conceição da Praia, Salvador, Bahia, Brasil. 7am-11pm, extended hours summer weekends & Carnaval. The beautifully restored, art deco Elevador Lacerda connects the Cidade Alta with Comércio via 4 elevators traveling 72 m in about 30 sec. The Jesuits installed the 1st manual rope-and-pulley elevator around 1610 to transport goods and passengers from the port to the settlement. In 1868 an iron structure with clanking steam elevators was inaugurated, replaced by an electric system in 1928. Facing the elevator are the impressive arches of the Câmara Municipal, the XVII century city hall, which occasionally puts on cultural exhibitions.

Convento de Igreja de São Francisco is a very important colonial monument in Brazil. The current church was built between 1708-1723, but the interior was decorated by several artists during a great part of the XVIII century. Most decoration of the church and convent were finished by 1755. All surfaces inside – walls, pillars, vaults and ceilings – are covered by golden sculptured gilt woodwork and paintings. The decoration of the church is considered one of the most complete and imposing in Portuguese-Brazilian Baroque gilt woodwork art (talha dourada), being a perfect example of the “golden church” (igreja dourada).

Igreja do Nosso Senhor do Bonfim — A small church located in a neighborhood to the north, is one of the most popular pilgrimage sites in all of Brazil. The colorful votive ribbons or fitas of Bonfim are an easily recognizable item throughout Brazil and even beyond. Children outside the church will (for a small fee) tie them around your wrist and tell you to make a wish for each one. If the ribbon wears off naturally, the wish will come true; if you cut it off before then, it won’t. You can get to Bonfim by city bus in about 15 minutes.

Igreja da Ordem Terceira de Sao Francisco (The Church of the Third Order of St. Francis), Rua São Francisco, Salvador. 8am-5pm. It is a Catholic church nominated for the election of the 7 Wonders of Brazil. The facade was covered with mortar in the late XVIII century and only in the early twentieth century, during services in the electric grid , was rediscovered its underlying decor. It wasn’t seen until a workman installing wiring in the 1930s serendipitously discovered the beautiful, baroque sandstone facade (the only one of its kind in Brazil). The church was designed by Gabriel Ribeiro. The ceiling is decorated with paintings by Franco Velasco in 1831.

Museu da Cidade (Cidade museum), Largo do Pelourinho, 3 – Pelourinho, Salvador – BA. 9am-6pm Mon & Wed-Fri, 1-5pm Sat, 9am-1pm Sun. Rather like the city itself, Museu da Cidade contains an eclectic assortment of the old and the modern, the sacred and the profane. Exhibits include Candomblé orixá costumes, the personal effects of the poet Castro Alves (author of Návio Negreiro, or Slave Ship, and one of the first public figures to protest slavery), and traditional rag dolls enacting quotidian colonial life, as well as paintings and sculptures.

Museu Afro-Brasileiro. M-F 9am-6pm, Sa Su 10am-5pm. — A museum that documents the slave trade and subsequent development of the city.

Museu Náutico da Bahia (Nautical Museum of Bahia), Largo do Farol da Barra. 8:30am-7pm Tue-Sun, daily Jan & Jul. In addition to having superb views, the Forte de Santo Antônio da Barra contains this excellent nautical museum, with relics and displays from the days of Portuguese seafaring, plus fascinating exhibits on the slave trade. All information is offered in both Portuguese and English – a rarity in Bahia. Sunset is delightful at the museum’s gorgeous terrace café.

Museu de Arte Moderna (Museum of Modern Art), Contorno s/n. 1-7pm Tue-Fri & Sun, to 9pm Sat. Museu de Arte Moderna has a changing display of avant-garde exhibits and erratic opening times. A fine restaurant and an art workshop occupy the former store house. The hillside sculpture garden is a pleasant place to take a breath and enjoy the fine bay views. Take a taxi there, as it is off bus routes and the desolate walk is known for tourist muggings.

Abaeté Park — A protected state park around the lake with same name. The lake is famous because of the stark contrast between the dark water and the very white sand dunes. There is a entertainment area with a lot of bars and live music.

Praia Porto da Barra (Porto da Barra beach), Praia Porto da Barra, Salvador, Bahia (near Avenida Oceânica and Avenida Sete de Setembro). Praia Porto da Barra beach is rather like the Pelourinho: small, picturesque, usually crowded, loaded with vendors selling everything imaginable, and roughly half those present are foreigners. The bay’s waters are clear and calm, and the people-watching is fantastic. To the left of the lighthouse, Praia do Farol da Barra has a beach break popular with surfers. Barra’s waterfront is lined with bars and restaurants and is well lit at night, but it gets a bit sleazy in the later hours.