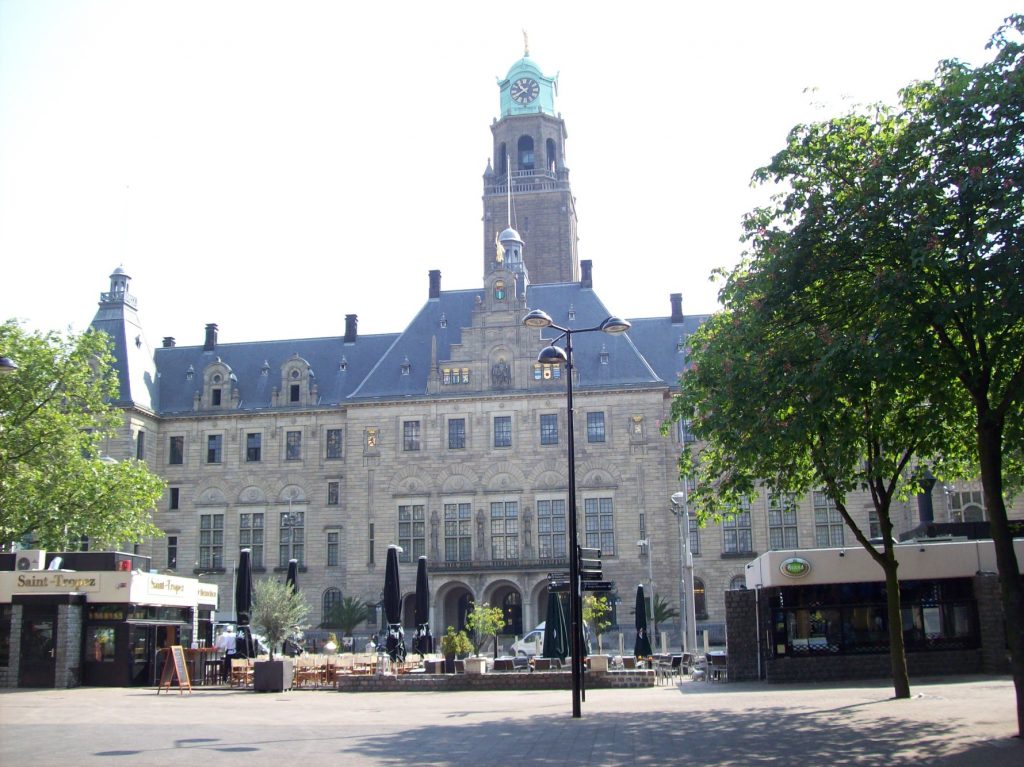 Explore Rotterdam a municipality and city in the Dutch province of South-Holland, situated in the west of The Netherlands and part of the Randstad. The municipality is the second largest in the country (behind Amsterdam), with a population of approximately 601,300 people and over 2.9 million inhabitants in its metropolitan area.

Rotterdam is known as a city of architecture. A few square kilometers of the city centre offers a complete overview of what the twentieth century has produced in terms of modern architecture. Due to this more modern atmosphere and the presence of several relatively high buildings, the city is especially interesting for Dutch people to visit.

Settlement at the lower end of the fen stream Rotte dates from at least 900. Around 1150, large floods in the area ended development, leading to the construction of protective dikes and dams. A dam on the Rotte or ‘Rotterdam’ was built in the 1260s and was located at the present-day Hoogstraat.

Although Rotterdam did well after the middle ages and in the ‘Golden Century’ – roughly between 1650 and 1750) it was not before the second part of the nineteenth century that the city started to develop itself rapidly. Helped by the digging of a new seaway (The Nieuwe Waterweg) Rotterdam was rid of acces problems caused by the silting of the river and started receiving ever bigger ships with cargo for/from the booming Ruhrgebiet in Germany. Port related trade and industry skyrocketed, and the city started to draw lots of migrants from the then poor Brabant province, for which the southern part of the city was constructed. At the turn of the twentieth century Rotterdam was well under way to become the largest economic centre in The Netherlands. It was between then and the second world war that large prestigious construction works were undertaken, in part to show off the new found economic pride.

In the Netherlands, Rotterdam has the highest percentage of foreigners from non-industrialized nations. Nearly 50% of the population are not native to the Netherlands or have at least one parent born outside the country. Recent figures show that Muslims comprise close to 25% of the city’s population. The city is also home to one of the largest communities from Cape Verde in the world, as well as the largest community from the Dutch Antilles.

The atmosphere of Rotterdam is absolutely distinct from other Dutch cities. The mentality can best be described as ‘can do’. From the waiters you meet to the businessmen and the people who have just arrived as migrants, all of them breathe a dynamic optimism of getting forward with things and their town.

Rotterdam is has an oceanic climate like all of the Dutch coastal areas. Winters are slightly warm, cloudy and foggy sometimes. Spring usually starts in mid-April since March and the first weeks of the month are still cold and they have an average of 6 days of snowfall. The high season starts in May when the city starts to come alive and locals and tourists start to go out and have fun. Summers are some of the most pleasant in the entire European continent.

The Hague Airport  is located 6km north of the city centre.

Since virtually everybody in the Netherlands speaks at least some English, getting around should be very easy for tourists who can only speak this language.

Markthal (market hall), Ds. Jan Scharpstraat 29. Mon-Thu, Sat 10AM-8pm, Fri 10am-9pm, Sun 12am-6pm. The Markthal is a large indoor food market/food court, with several tens of stalls selling vegetables, meats, fish, cheeses, nuts and other food as well as small eateries, supermarkets, liquor shops. The Markthal opened in August 2014 and the building itself is a good example of modern Rotterdam architecture. It is quite popular with locals and tourists alike, so it can get crowded especially on the weekends.

What to see. Best top attractions in Rotterdam, Netherlands

The closest good beach is a short train ride (32 min) away at Hook of Holland. Here you will find a very fine sand beach with good swimming and enough entertainment. Leave the town of Hoek van Holland proper aside, there is nothing there.

For a more urban-party beach experience head to Scheveningen where you can find everything beach-party addicts dream about; Endless rows of beachside bars, restaurants and discothèques and a boulevard along a splendid fine-sand beach. It can get very crowded here.

Rotterdam plays host to a lot of events, a lot of them yearly ones. Besides these there are a lot smaller ones that can be very nice, so ask around and check the VVV website. A few of these yearly events to name:

Being a major harbor and having lots of waterways and lakes, Rotterdam has a lot to offer for water-enthusiasts. Boating: There are four major lakes in Rotterdam.

All of them have active yachting communities and sometimes sailing races can be seen. The Zevenhuizer plas is mainly populated by Windsurf enthusiasts. Rowing- and sailing boats can be rented at the windmill at the very end of the eastern Rottekade at Van Viet’s. When visiting Rotterdam with your own yacht you will find that most yachting harbors are on the inland waterways, were there are a lot of them. On the river Maas you will only find the City Marina, behind a bascule bridge on the southern bank, and the Veerhaven, right in the city center on the northern bank. Unless you need the better shelter of the characterless City Marina, go for the admittedly a little choppy Veerhaven marina, very central and scenic.

The main shopping areas in the center are the Lijnbaan and the Hoogstraat. Both are pedestrianized. The Lijnbaan, which runs straight south from the Weena (close to Rotterdam Centraal) was the first pedestrianized shopping street in the world when it was built in 1953. Now it is more of an average shopping street with average shops. In weekends it’s very crowded. Linking the Lijnbaan with the Hoogstraat is the Beurstraverse, dubbed Koopgoot (Buying-gutter). A subterranean passage connects to Beurs metro station. It’s all rather big and somewhat strange for a Dutch city, but it fits perfectly into the Rotterdam aspiration of being different. If you’re looking for it, ask for the Koopgoot, as the official name is little known. A more alternative shopping experience could be found at Botersloot and Pannekoekstraat, which have many independent, some outright odd shops. Both streets run parallel to the east from the market square where Blaak metro and train station is located.

There are about 12 larger and smaller open air markets dotted around Rotterdam. Most of them are enjoyable places to walk through. A nice place to visit is the inner City Market (Tue and Sat, in summer also on Sun a smaller version) which is a huge (about 450 stalls) open air food and hardware market. It’s at the eastern end of the Hoogstraat on the Binnenrotte. More exotic and colourful is the Afrikaanderplein Market (South of the river). This market is geared very much towards Rotterdam inhabitants of Antillean, South American or African descent (a lot of who happen to live nearby). Wed and Sat, about 300 stalls.

Things to buy Dutch cheese is very famous, you can get some at grocery stores or wider variety at the marketplace. Other typical Dutch things are stroopwafels, hagelslag and drop (liquor ice).

The area around metro station Blaak, called Oude haven (Old Harbor), is not only worth seeing but has also a lot of pubs and restaurants. The Rotterdam dining scene is developing very fast with new restaurants opening very often. While most of the attention focuses on new Michelin-star aspiring places, there is very much a trend towards high quality mid-range restaurants offering French/Dutch cuisine.

What to drink in Rotterdam

Watch a video about Rotterdam