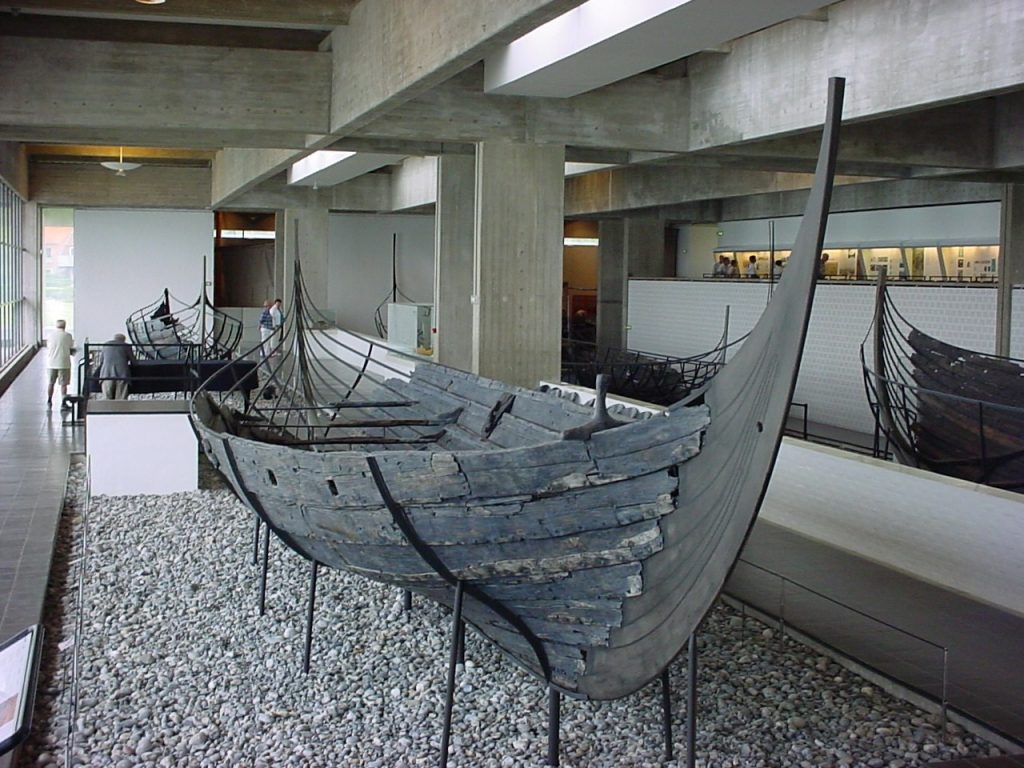 Explore Roskilde in West Zealand, Denmark, 35 km west of Copenhagen. Roskilde is an ancient city dating from the Viking age. The most important historical sights are the Viking Museum and Roskilde Cathedral. Roskilde is also home to the giant rock music event, Roskilde Festival.

Roskilde is south of Roskilde Inlet with the Viking Museum and some of the accommodation and restaurant options nearby. Central Roskilde is 1 km further south centered around the pedestrian street Algade/Skomagergade and Roskilde Cathedral. The city centre is quite small at around 1 square kilometer bordered by a ring road. The train station is at the southern end of the city centre. Roskilde Festival is 4 km south from the train station along Køgevej.

Roskilde was established more than 1,000 years ago, at which time it had a wooden church and a royal farm. In the 12th century, Roskilde Cathedral was built and Roskilde became the seat of the bishop and was also granted the status of a market town. The town was one of the most important in Denmark for the next few centuries until the reformation ended the importance of the church.

Roskilde Cathedral (Roskilde Domkirke). Apr-Sep M-Sa 9AM-5PM, Su 12:30PM-5PM; Oct-Mar Tu-Sa 10AM-4PM, Su 12:30PM-4PM, limited access during ceremonies. On UNESCO’s World Heritage List. This is where Danish kings and queens have been buried for a thousand years, 20 kings and 17 queens lay in the four chapels’ here. Most impressive are the temple like monuments for king Christian 3 and his wife. A wooden church was built here in the 10th century; the present church was built in early 13th century. Home to the Cathedral Museum.

Roskilde Palace, Stændertorvet 3. Home to two exhibitions, the Museum of Contemporary Art and the Palace Wing. A four wing yellow baroque building built in the 18th century. Was home to the king and his family when around.

Roskilde Station, Jernbanegade 1. The oldest train station in Denmark built in 1847 in connection with opening of the first railway between Copenhagen and Roskilde.

Historic granite tiles, Skomagergade. 15 granit tiles in the pavement illustrating the history of Roskilde. Was created by sculptor Ole Knudsen in 2009.

The Giant Jars, Hestetorvet. Three five meter high jars created in 1998 by sculptor Peter Brandes. They symbolize life and dead and were placed here to mark the city’s 1,000 year anniversary. One of the jars has inscribed a poem by Henrik Nordbrandt.

Bypark, (between Roskilde Cathedral and Roskilde Inlet). Established in 1915 by Roskilde’s patron, O.H.Schmeltz. Comprises a playground for children, a snake-like walking path and other areas well suited for a stroll or for hanging around. The park is home to cultural events including summer concerts Tuesdays in July. If you walk from the city centre to the viking museum, this can be done through the park.

Folkepark. Consists of a number of combined parks primarily based on former monestary land. Was first established in early 19th century and found its present form in the 1930s. The park is home to cultural events including performances for children at the amphitheater on summer Thursdays.

The Viking Ship Museum, Vindeboder 12. 10AM-5PM. A museum with several original Viking ships, a Viking research center, a harbor with copies of Viking ships, and a shipyard making new ships.

Roskilde Museum, Sankt Ols Gade 18. Local history museum, but well in tune with other attractions, it also has a good collection of Viking archaeological finds, some connecting to the sagas about the legendary Beowulf.

Roskilde Mini Town, Skt Ibs Vej. Always accessible. Model of Roskilde as it might have looked in its heyday around 1400. The model is at scale 1:200 and is around 50 square meters. It was finalized in 1999 but was not inaugurate it its present location until 2005. Free.

St. Hans Hospital Museum, Kurhusvænge. W 1PM-4PM. The psychiatric hospital was established in 1860 as one of the most modern of its time. The museum shows the history of the hospital. Free.

What to do in Roskilde, Denmark

The legendary Roskilde festival is still going strong despite 40 years of sex, drugs and rock’n’roll! Started by a group of friends in 1971 inspired by the Woodstock festival, it has grown from a few thousand guests in its first year, to over 115.000 visitors from all over the world, and is routinely sold out with over half the tickets sold outside of Denmark.

Many people show up a week before the music starts to get their tents up so they can sleep close to the stage area, and limit walking as much as possible as the camping area is huge! A good tip is securing a place as far from trees and fences as possible, since they in essence become one big urinal during the festival, if rain is forecast, you should also attempt to camp as far from the marked walkways, preferably on a slope, since mud quickly becomes an issue.

On the camping grounds there are several service areas with food stalls and supermarkets to stock up with eat & drink, some also have first aid, toilets and showers. Inside the stage area there are also many restaurants and bars – most of them with a theme, and some of them are really huge and elaborate. There are also many shops where you can buy necessities and other rubbish.

Music is playing from Thursday – Sunday and are usually varied, with some international headline acts, and much experimental and indie music and the smaller stages.

Sail in a Viking boat on the fjord, (At the Viking centre).

Sagnlandet Lejre, Slangealleen 2, 4320 Lejre. Become a Viking for a day, in this spectacular hands-on history museum.

The Path of the Gods (Gudernes Stræde). 64 km marked path on asphalt, soil and grass. All of the path can be walked and most is also fine for bikes. The path connects Køge Bay near Karslunde Beach with Ise Inlet near Kirke Hyllinge. A large part of the path is in Roskilde Municipality. A great way to experience the local nature and culture.

On Roskilde festival the nearest supermarket is Fakta at Køgevej 108, about 1300 meters (a 15-20 minute walk) due north (past the highway) from the eastern entrance. The downtown area which has a pedestrianized area full of different shops is a further 1½ km away (or 30-40 minutes by foot).

Watch a video about Roskilde