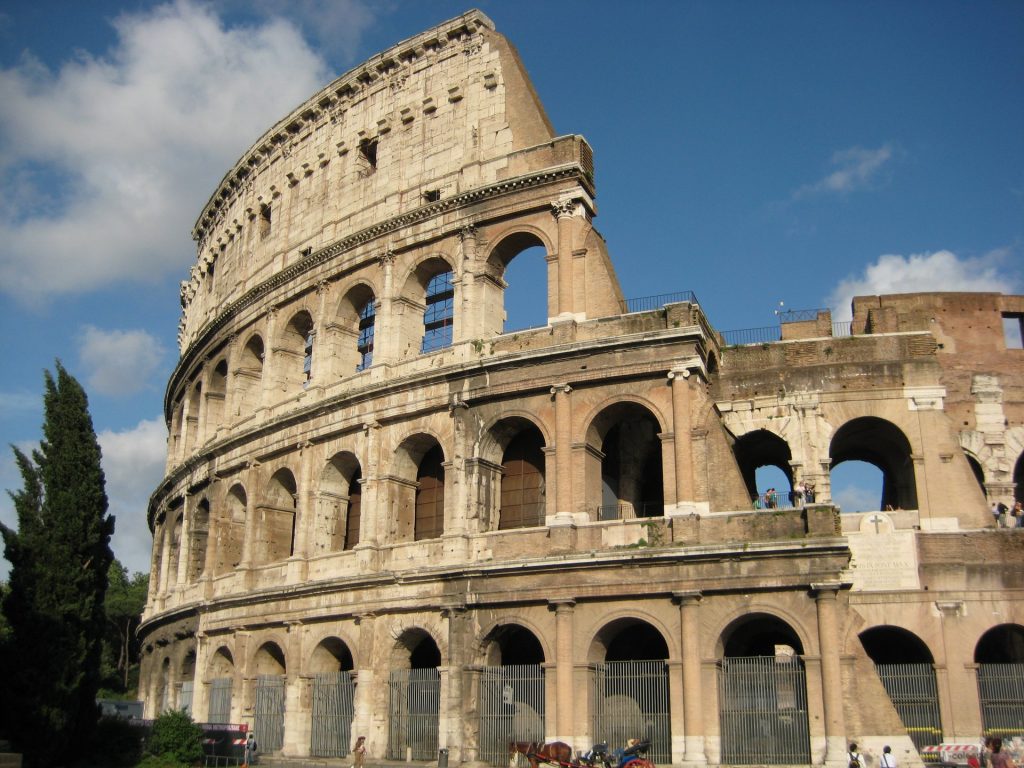 Explore Rome the Eternal City, the capital and largest city of Italy and of the Lazio region. It is famous for being the home of the ancient Roman Empire, the Seven Hills, La Dolce Vita (the sweet life), the Vatican City and Three Coins in the Fountain. Rome, as a millennia-long center of power, culture (having been the cradle of one of the globe’s greatest civilizations ever) and religion, has exerted a huge influence over the world in its roughly 2800 years of existence.

The historic centre of the city is a UNESCO World Heritage Site. With wonderful palaces, thousand-year-old churches, grand Romantic ruins, opulent monuments, ornate statues and graceful fountains, Rome has an immensely rich historical heritage and cosmopolitan atmosphere, making it one of Europe’s and the world’s most visited, famous, influential and beautiful capitals. Today, Rome has a growing nightlife scene and is also seen as a shopping heaven, being regarded as one of the fashion capitals of the world (some of Italy’s oldest jewelry and clothing establishments were founded in the city).

With so many sights and things to do, Rome can truly be classified a “global city”.

Rome can be divided into several districts: the so-called historical centre is quite small – only around 4% of the city area – but it’s the place in which most of the tourist attractions are located.

Situated on the river Tiber, between the Apennine Mountains and the Tyrrhenian Sea, the “Eternal City” was once the administrative centre of the mighty Roman Empire, ruling over a vast territory that stretched all the way from Britain to Mesopotamia. Today, the city is the seat of the Italian government and home to numerous ministerial offices

Architecturally and culturally, Rome has some contrasts – you have areas with pompously huge majestic palaces, avenues and basilicas which are then surrounded by tiny alleyways, little churches and old houses; you may also find yourself walking from a grand palace and tree-lined elegant boulevard, into a small and cramped Medieval-like street.

The abbreviation “S.P.Q.R” – short for the old motto of the Roman Republic Senatus Populusque Romanus (“The Senate and People of Rome”) – is ubiquitous in Rome, being also that of Rome’s city council; a humorous variation is “Sono pazzi questi romani” (these Romans are crazy).

For two weeks in August, many of Rome’s inhabitants used to shut up shop and go on their own vacations; today, however, things have changed – many shops and restaurants (especially those located in the historical centre that cater to tourists) are open in summer. On the other hand, the ones located in residential areas do close. The temperature in the city at this time of year is not particularly pleasant: if you do travel to Rome at this time, you might see chiuso per ferie (closed for holidays) signs on many establishments. Even in these weeks the city is very beautiful and you will always be able to find somewhere to eat.

Rome’s history spans over two and half thousand years, which have seen its transformation from a small Latin village to the centre of a vast empire, through the founding of Catholicism, and into the capital of today’s Italy. This is a long and complex topic.

Rome is traditionally said to have been founded by the mythical twins Romulus and Remus (the sons of Mars and Rhea Silvia) on 21 April 753 BC. The twins were abandoned as infants in the Tiber River and raised by a she-wolf (Lupa) before being found by a shepherd (Faustulus), who raised them as his own sons.

Actually, Rome was founded as a small village on top of the Palatine Hill (including the area where the Roman Forum is found) sometime in the 8th century BC; due to the village’s position at a ford on the Tiber river, Rome became a crossroads of traffic and trade.

For almost a thousand years, Rome was the largest, wealthiest, most powerful city in the Western world, with dominance over most of Europe and the Mediterranean Sea. Even after the fall of the Western Roman Empire in 476AD, Rome maintained considerable importance and wealth. Beginning with the reign of Constantine I (306-337), the Bishop of Rome (later known as the Pope) gained political and religious importance, establishing the city as the centre of the Catholic Church.

Driving to Rome is quite easy; as they say, all roads lead to Rome. The city is ringed by a motorway – the Grande Raccordo Anulare or, simply, the GRA. If you are going to the very centre of the city any road leading off the GRA will get you there; if you are going anywhere else, however, a GPS or a good map is essential.

What to see. Best top attractions in Rome, Italy

Italians are very fond of their landmarks; in order to make them accessible to everyone one week a year there is no charge for admittance to all publicly owned landmarks and historical sites. This week, known as the “Settimana dei Beni Culturali”, typically occurs in mid-May and for those 7 to 10 days every landmark, archaeological site and museum belonging to government agencies (including the Quirinal palace and its gardens, the Coliseum and the entire ancient Forum) is accessible and free of charge.

In general, Rome’s main attractions are free – for example, while it doesn’t cost anything to enter the Pantheon you’ll have to pay to visit the museums and so forth.

Children’s Museum, via Flaminia, 82. Just north of piazza del Popolo. Controlled entrance at 10:00, 12:00, 15:00 and 17:00 for visits lasting 1 hour 45 minutes. Closed Mondays and for much of August. Best to check the web site for up-to-date info and to book in advance. Hands-on science, mainly for pre-teens, housed in a former tram depot.

Bioparco. The rechristened Giardino Zoologico, Rome’s municipal zoo. It is located on the edge of Villa Borghese. 09:30 to 17:00 or 18:00 depending on the month. They try hard, but San Diego this isn’t; if you are a regular zoo-goer you will be disappointed.

The Time Elevator, via dei Santi Apostoli, 20 on a side street between piazza Venezia and the Trevi Fountain. Daily 10:30-19:30. “Five-dimensional” shows on the Origins of Life and on the History of Rome, plus “The House of Horrors”. Not for the faint-hearted: your seats move all over the place. Kids love it.

Planetarium at EUR. Home to an excellent astronomy museum, it’s conveniently located next to the Museum of the Roman Civilization.

The Vatican is, by and large, not a great idea for kids although they often enjoy the Sistine Chapel and are impressed by the beauty and the fact that it was all done in just four years. However, the Sistine Chapel is very crowded and getting there through the corridors of the Vatican Museum is even worse. It is easy for families to get separated so determine a meeting point. The best part of St. Peter’s Basilica is that kids can go to the top of the dome. It is 500 steps but you can take the elevator up to the third floor. From there there are another 323 exhausting steps. So it is fun for older kids who can both climb up all the stairs and walk down as there is a huge line for the elevator.

Zoomarine. Dolphins, sea lions, exotic birds, splashy rides and swimming pools some 20km south of Rome, near Pomezia. A good day out, but is this really why you came to Rome? Free transport from the EUR and Pomezia railway station.

What to do in Rome, Italy

What to buy in Rome

Rome has excellent shopping opportunities of all kinds – clothing and jewelry (it has been nominated as a top fashion capital) to art and antiques. You also get some big department stores, outlets and shopping centers, notably in the suburbs and outskirts.

Rome is full of good restaurants, many in attractive settings, particularly when you sit outside in the evening. No one location can be recommended to search for a good restaurant: some of the best places to eat are in the most unpromising locations while well-situated restaurants can often live on their reputation rather than the quality of their food. Restaurants in guidebooks can be good but prices can be inflated because it is more than likely a “tourist trap.” To find an authentic restaurant that won’t break the bank try to find a place in a more residential area or somewhere that isn’t in the middle of the tourist locations.

In Rome you can ask for:

Many of the best restaurants in Rome, however, are hard to find as most of them are located outside the historical centre – a good tip is to go where Italians live and eat. For example, beyond the Janiculum (in the Monteverde vecchio district) there are some trattorie with authentic Italian cuisine at an affordable price. Rome also has many beautiful spots to eat, so buying some delicacies to make up a picnic can be a great experience. An even more affordable choice is to go to a local supermarket which will also have good foods for lunch.

What to drink in Rome

In Rome the population speaks Italian and the road signs are mostly in that language (except for “STOP”). If you are staying in the city, there are plenty of English alternatives to be found; Rome is a popular place to visit and there are maps and information in many languages available. Police officers and transit drivers are more than willing to help you get around and usually provide easier ways to get around.

Also, most residents speak – to varying degrees – the local Roman dialect which can be hard to understand if you’ve just picked up Italian.

English is widely spoken in Rome by the younger generations and by people working in the tourist industry; among 40+s the chance of finding English-speaking people is a lot less, and with 60+s as good as zero. Most Romans, however, always try to be helpful with the tourists by giving some basic indications – and since so many people have a limited knowledge of English, it is wise to speak slowly and simply.

Romance languages other than Italian – especially Spanish, French and Portuguese, can be also understood (Spanish better than Portuguese) due to their similarity to Italian, although not necessarily spoken. Romanian, on the other hand, is not well understood despite it being a Romance language. However, make sure not confuse Italian with Spanish, or to address locals in that language – they might not take it kindly.

Watch a video about Rome