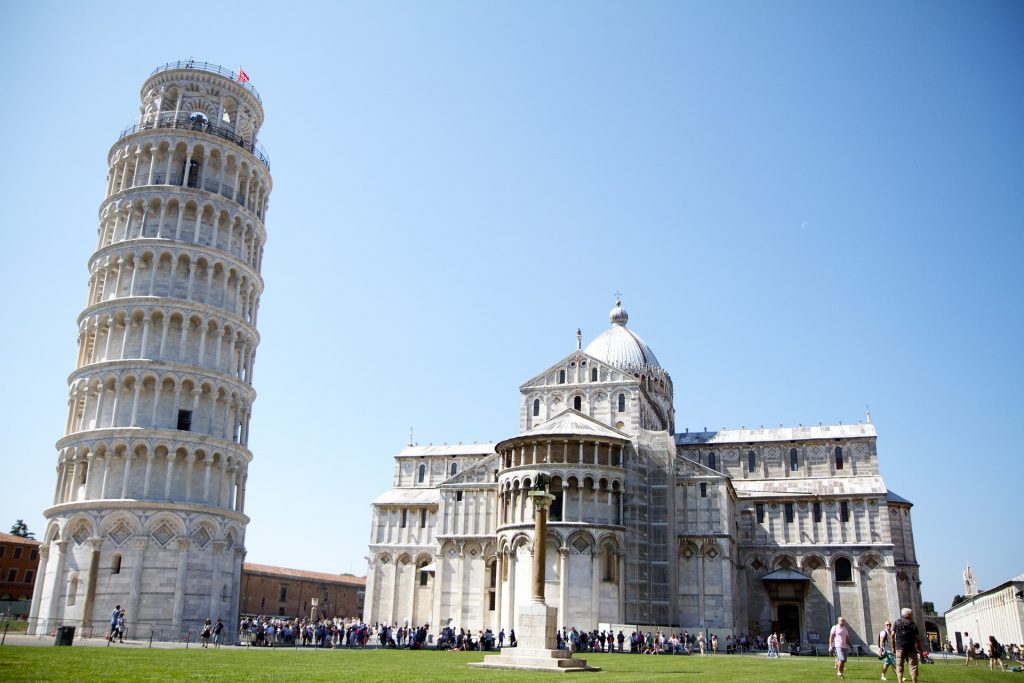 Explore Pisa a city in Tuscany, Italy with a population of some 90,000 people. Pisa is best known for the world famous Leaning Tower, but those who come here with their mind already made up that the Tower is the only thing to see may miss the rest of the architectural and artistic marvels of this beautiful city.

The half hour walk from the Campo dei Miracoli (Field of Miracles) to the train station runs through a pedestrian street with many interesting sights, shops, and restaurants. The best way to visit Pisa is walking the streets; the city center is very small, so enjoy the sight and the atmosphere.

Pisa would not be Pisa without the University. The city is animated by the students, who organize parties, shows, and cultural events, and fill the central street of the city at night. The University of Pisa has 60,000 students in a city of about 90,000 inhabitants. You’ll notice the student flair in the city once you leave the touristy campo dei miracoli.

Pisa Galileo Galilei Airport is the main airport of Tuscany and is served by several airlines operating hundreds of weekly flights to national and international destinations. Numerous companies offer charter flights to and from a number of European and non-European destinations. The airport is close to the city center – it takes only a few minutes to reach the center.

Many car rental agencies are at the airport. While you will not need a car in the city itself, it can be a good choice if you want to go around Tuscany from Pisa.

What to see. Best top attractions in Pisa, Italy.

Pisa is divided into 4 historical quarters. There is much more than the Leaning Tower in the city and several different walking itineraries are available.

What to do in Pisa, Italy

Casciana Terme: the thermal water used at Casciana Terme since ancient times, has in recent years seen its applications extended to modern rehabilitation therapies, cardiovascular and respiratory treatment, in the improvement of the digestive functions and their treatment, because its natural, relaxing action enables patients to regain their functional equilibrium and the enjoyment of pleasures they had lost.

San Giuliano Terme: Water with beneficial effects and calciferous magnesic sulfate water, naturally rich in vital curative elements, gush forth at the foot of Mount San Giuliano at the Spa out of different springs and are gathered in two groups called the “East Baths” (40° C temperature) and the “West Baths” (38° C temperature).

The central shopping area is centered around the Corso Italia, between the railway station and the Ponte di Mezzo (the central bridge) and also in the Via Borgo Stretto, north of the bridge. However, many specialized shops are sprinkled around the city.

The area around the leaning tower is geared toward tourists: There are lots of small souvenir kiosks, stands and “flying merchants”, selling all kinds of souvenirs from small statues to hour-glasses – of course the general motif is the leaning tower.

Every two weeks there is a bazaar with quite cheap books, records and old household items.

As a general rule, try not to eat near the Leaning Tower where prices are high and quality low. Head instead to the central area (5-10 minutes walking from Piazza dei Miracoli): you can find very good, cheap restaurants there. For example, there are excellent, friendly and reasonably priced cafeterias in the busy small vegetable market, Piazza delle Vettovaglie. Also Via San Martino, close to the south bank of the river, offers some places with good quality and low price.

Try some of Pisa’s famous biscotti (biscuits or cookies). Bakeries all through town will sell multiple varieties, for a low price.

For the budget option, if coming from the Airport, there is a Coop supermarket on the left, on Via Pasquale Pardi.

During summer nights, everybody stays around the banks of the rivers, sipping drinks bought from the several bars in the area. A few very good wine bars are also available for colder, winter nights.

The Pisa hills were already a popular destination for enlightened travellers in the first half of the 1700s, due mostly to the popularity of the thermal spa of San Giuliano, which quickly became a fashionable spot for the upper classes. The mansions on the road along the hills, already renowned as places of idleness and relaxation in the heart of the countryside, soon assumed the characteristics of true leisure resorts.

Watch a video about Pisa