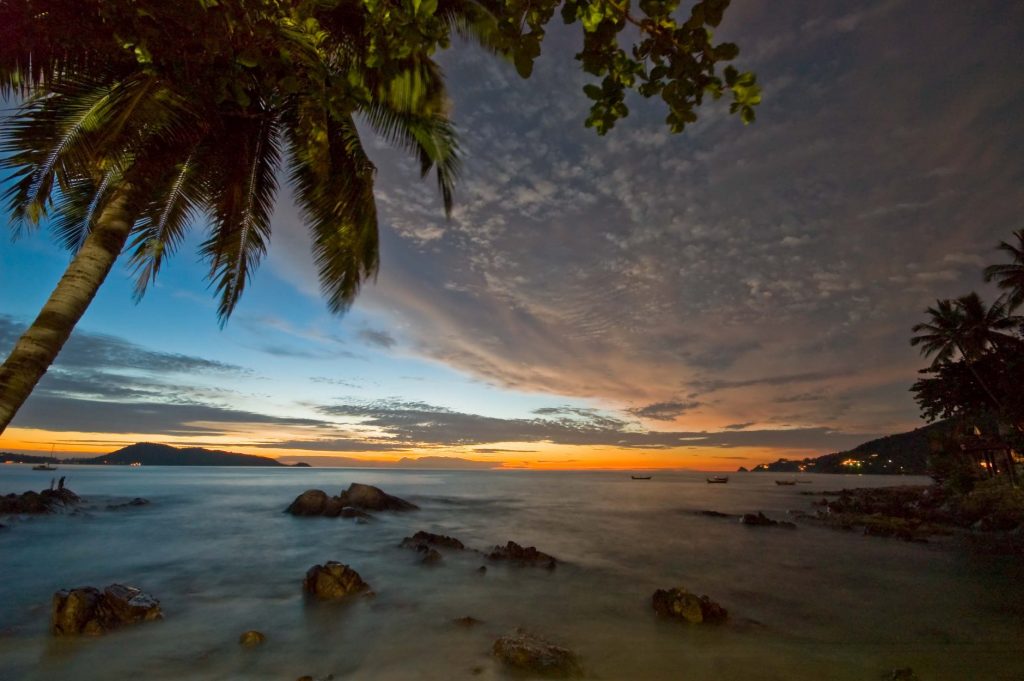 Explore Phuket the provincial capital of Phuket Province and  its largest town. It has a population of 63,000 and is the economic hub of the island. For the most part just an ordinary, scruffy provincial Thai town, it’s hardly a major tourist attraction, but the Chinatown area is worth a quick look and there are some great Thai-style shopping opportunities too. Overall, accommodation and food in the town is cheaper than near the beaches, and can provide a refreshing change of pace.

Buses and songthaews connect Phuket Town to major beaches around the island, and start from Thanon Ranong at the Ranong market.

Songteows go from the market, but all of them now go from the number one bus station first. They will take you to the market and wait for a full load. Costs an extra B10. Coming back is the same, they finish at the market, and you say you want to go to the bus terminal.

Phuket International Airport is 30km to the north of Phuket Town, about 30-45 minutes by taxi , an hour minutes by shared minibus  or 1h20 by Government Bus from the Number One Bus Terminal. They do not stop at the new bus terminal.

What to see. Best top attractions in Phuket, Thailand.

Phuket Town’s low-key attractions are mostly related to its colorful Chinese history and heritage, found in the Chinatown area on the north-western side of the city around Thanon Thalang.

Old Phuket. The beginning of the tin boom in the 19th century led to construction of many fine mansions and shops that are still well preserved. The architectural style, typical of the region, is described as Sino-Portuguese and has a strongly Mediterranean character. Shops present a very narrow face onto the street but stretch back a long way. Many, especially on Dibuk Road, have old wooden doors with Chinese fretwork carving.

Other streets, forming what might be called “Old Phuket”, with similar structures are Phang-nga, Yaowarat, Thalang, and Krabi, and a walking tour of the area is easy and delightful. Some other old European-style buildings of note are the Provincial Hall, the Phuket Courthouse, and Siam City Bank.

Soi Rommanee is located on Talang Road in Phuket’s old Town, was a major entertainment area in the past.The style and architecture has been preserved exactly the way they were 100 year ago.

Jui Tui and Put Jaw Temples, corner of Thanon Ranong and Soi Phuthon (just west of the Ranong bus terminus). Put Jaw is the oldest Chinese Taoist temple in Phuket, first built over 200 years ago and dedicated to the Goddess of Mercy (Kwun Im), while the adjacent and connected Jui Tui is its larger, more modern annex. If you have a question that is puzzling you, ask it and throw the two red mango-shaped pieces in front of the altar in the air: if they land the same side up the answer is “no”, while if they land on different sides the answer is “yes”. Free entry but donations welcome.

Khao Rang. A great view of Phuket Town, the southern part of the island, and some of the offshore islands, can be obtained by going to the top of Khao Rang Hill, on the town’s northwest border. There are also several restaurants featuring spectacular views of the city, a health park for exercise enthusiasts, and a comfortable, expanse of grass at the top with a bronze statue of Phraya Ratsada Nupradit, the model Governor of Phuket during King Rama V’s reign.

Saphan Hin. A land reclamation project provided abundant new land now used for parks and public facilities at Saphan Hin, located where Phuket Road meets the sea in Phuket Town. In the circle is the Tin Mining Monument, shaped like a large drill bit, dedicated to the memory of Captain Edward Thomas Miles, the Australian who brought the first tin dredge to Phuket in 1909. The monument was built in 1969 on the occasion of the 60th anniversary of tin dredging in Phuket. There is a sport center in the park.

Phuket Butterfly Farm. 3km from town via Yaowarat Road and the Sam Kong intersection. It has a fascinating collection of such tropical creatures as butterflies, insects, marine life all arranged in natural surroundings. It is open daily from 9.00 a.m.-5.00 p.m.

Phuket Cultural Center. Located in the area of the Phuket Rajabhat University on Thepkrasattri Road. It displays history as well as the arts and culture of Phuket, such as houses, ways of life, and utensils of the city of Thalang in ancient times. Furthermore, the library collects books on Phuket’s history and culture. The center is open daily for free from 8.30 a.m. – 4.30 p.m., except public holidays. For a group of visitors who needs a guided tour, please address a letter of request to the Phuket Cultural Center at 21 Thepkrasattri Road, Tambon Ratsada, Amphoe Mueang Phuket, Phuket, or call Tel. 0 7624 0474-6 ext. 148, 0 7621 1959, 0 7622 2370, Fax: 0 7621 1778.

Thai Village and Orchid Farm. Located on Thepkasattri Road about 3km from town, serves daily a typical southern Thai lunch that is followed by a spectacular cultural show including Thai dances, Thai boxing southern customs and elephants. Handicrafts are also on display. The complex also houses a dining hall decorated with over 20,000 varieties of orchid and tropical trees. Digestion is aided by the lilting sounds of Thai classical and folk music played on tradition instruments. It is open daily from 9.00 a.m.-9.00 p.m. Cultural shows are performed daily at 1.00 p.m. and 5.30 p.m.

Phuket Zoo. Located on the way to Chalong Bay, the zoo contains a collection of Asian and African mammals and birds. Elephant and crocodile shows are performed every day. The zoo is open daily from 8.30 a.m. – 6.00 p.m.

Thaihua Museum. Located on Krabi road in an old chinese language school, this museum tells the history of chinese imigrants on Phuket.

Crocodile Farm: Watch the staff at Chana Charoen Road tame crocodiles and alligators right in front of you.

Chalong Temple (Chaiyathararam Temple): Visit the ancient temple of Phuket’s monks who helped the people during the Chinese rebellion. This is the largest Temple in Phuket. It is on Chao Fa West Rd, Mueang (City).

Baan Teelanka & A-Maze-in-Phuket, Bypass Road Km 2 (Between Premium Outlet and Siam Niramit). 10am-6pm. The Upside Down House of Phuket, one of the island’s newest attraction. Totally built upside down, great photo opportunities. The garden of the house is a garden maze. Also on site a room escape activity from THB 250.

What to do in Phuket, Thailand

Elite Yachting Phuket Thailand (Yacht Haven Marina, Phuket), Boat Lagoon Marina, 20/3 Moo 2, Thepkasattri Rd., Phuket 83000 Thailand. specialist in bare boat and crewed yacht charters in the Andaman Sea, operating one of Phuket’s largest charter fleets of sailing yachts, including both monohulls and catamarans. The company has been operating in Phuket since 1993 and is therefore one of the longest-running charter company on the island. from €190/day.

Shopping seems to be the main reason for visitors to come to Phuket Town. In addition to local markets and a slew of malls and departments stores, Chinatown’s Thanon Thalang offers a large selection of boutiques and galleries retailing traditional handicrafts as well as antiques from the region. Phuket Night Bazaar is a large area, where you can get local stuff (though you might find the same things much cheaper at the Big C supermarket!).

Ranong Market, Thanon Ranong, is the largest local market. A warren of stalls selling anything and everything, it can be a hot, sweaty and chaotic but an interesting experience if you’ve not been to one before.

Weekend Market, Wirat Hong Yok Road (Opposite to Wat Naka (Naka Temple) on western end of the road). Endless stalls with the cheapest of Thai souvenirs. Thai people also shop here, but it’s nearly full of fake goods. Food court is large and is alone worth a visit.

Ocean and Robinsons are next to each other on Tilok Uthit 1 Road. Robinsons is a big department store, and there is a Tops supermarket, as well as McD’s , KFC etc.

Central Festival, Thanon Chaloem Phra Kiat – Phuket’s branch of the Thai department store chain, also selling anything and everything but now in air-con comfort and a zero added to the price tag. It’s still probably cheaper than the street markets at the beaches. The food section offers a large variety of western products and the fresh products seem to be of better quality than Big C or Tesco Lotus. Prices are much higher than the others though.

SuperCheap claims to be the biggest and cheapest mall in Phuket, a cross between a Metro Market, Walmart, a Bazaar, and a normal local market for nearly everything from groceries to motorbike and car supplies and electronics. The best time to visit is in the evening. Take a small dinner in the nearby Thai restaurant (all you can eat – but when you leave something on the plate it costs) and afterwards join the Thai people at the market. SuperCheap is situated on the road to the airport, about 5 km out of Phuket Town centre, just behind the Esso site. Open until midnight.

All You Can Eat, at Super Cheap. But you have to empty your plate – otherwise it costs double. That’s not a joke, but very useful in keeping guests eating things they really like to eat and not wasting food. If you order water with ice, the ice costs extra!

It can be quite difficult to find a cheap hotel here in the tourist high season if you have not booked in advance.

Catch a ferry from Rassada Pier to Koh Phi Phi, Rai Leh, or any of the surrounding islands.

From the bus stations- Number one gets you to Takuapa and Phang Nga, and number two to other destinations. The aircon bus to Takuapa takes about 3 hours.

If going to Chumphon, there are several buses from bay number 3 in Terminal 2, and these buses finish in Chumphon town, and not the distant bus terminal there. (Rungkit Tour) Cost includes a free meal at Takuapa. Takes about 8 hours (despite the 6.5 hour timetable).

Watch a video about Phuket