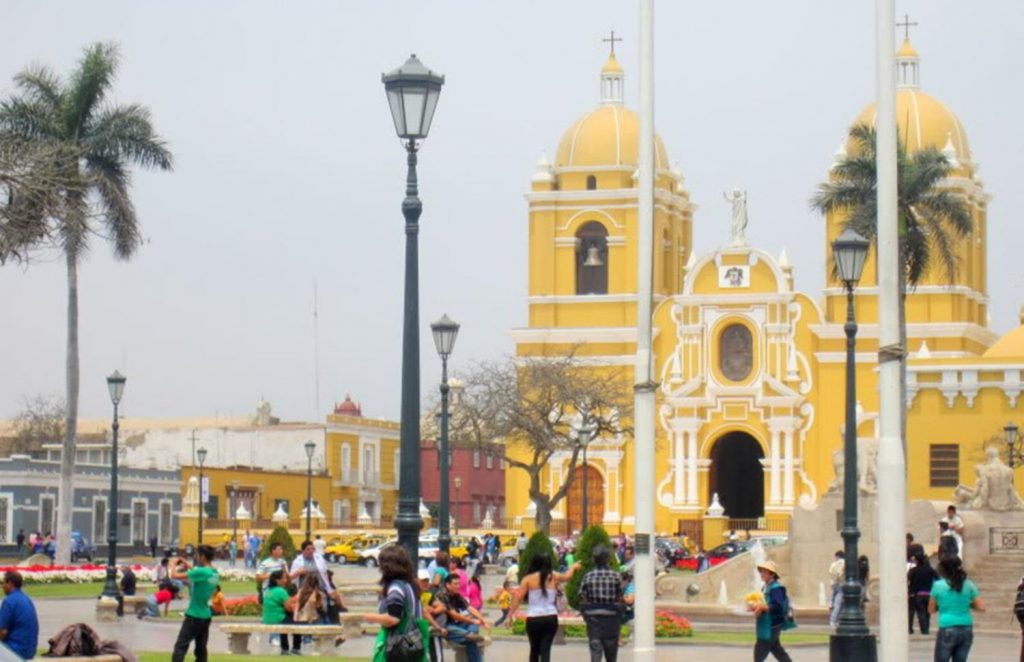 What to eat in Peru

Peruvian cuisine is among the most known and varied in the world. Not only does the country grow a variety of fruits and vegetables, but it does so throughout the year. Peruvian geography offers at least 8 different climates (desert along the coast, steep and high mountains, and the Amazon basin). In Lima, due to its history as an important Spanish colonial port, the dishes are a mixture of amerindian, spaniard, african, asian and even italian influences that contribute to the ever changing platos criollos (creole dishes). Rice is the staple foodstuff, and expect many dishes to include rice, in the Sierra its corn and potatoes, and in the Jungle yuca. Meat is traditionally included in most Peruvian dishes. Chicken (pollo), pork, sheep and beef are common. Alpacas are actually kept for wool, not for meat. Mostly, you will find that alpaca meat is rather tough. An Andean delicacy is guinea pig (cuy). Peruvian cuisine includes dishes which use various organs, including anticuchos, a kebab made from very marinated and spicy beef heart, and cau-cau (sounds like cow-cow), made from cow stomach served in a yellow sauce with potatoes. Anticuchos are a standard street stall food, but be careful with it.

Fish can be found along the coast, but also in the jungle area since the rivers supply fresh fish (but beware of contamination in the area known as high jungle or selva alta, where most of the cocaine is made and strong chemicals get dumped into rivers; mining is a minor source of pollution in this area). In the Sierra, trout (truchas) are bred in several places. A very common fish dish is ceviche, raw fish prepared marinated in lime juice. Popular variations of the dish can include shellfish, and even sea urchin. The exact recipe and mode of preparation of ceviche will vary from region to region. Definitely worth a try, especially in summer, but cleanliness and sanitation make all the difference. Use care when buying from street vendors and remember that it is often served spicy.

Throughout Peru there is a wide variety of potato dishes (papas, not patatas as in Spain), the traditional Andean vegetable. Papa a la Huancaina is a tasty dish of potato slices and diced boiled egg topped with a thin, creamy yellow sauce, and usually includes a lettuce leaf and an olive or two. (A similar green sauce, called Ocopa, can be served over potatoes or yuca.) Papa rellena is mashed potato reformed into a potato-like shape, but with meat, vegetables, and other spicy filling in the middle. Aji de gallina is shredded chicken in a thick, spicy, cheese-based sauce over sliced potatoes, often with an olive and slice of hard-boiled egg. Causa is mashed potato layered with mayonnaise-based tuna or chicken salad mixed with hot peppers.

Many Peruvian dishes can be very spicy and heavy, so if you have a weak stomach, proceed with caution.

Nowadays, the transport routes from the flat jungle areas are good enough to supply all the country with vegetables and fruits. Nevertheless, vegetables still have the status of a garnish for the meat. Vegetarian restaurants exist in all cities, but are relatively rare. In most areas, there is a rich offering of tropical fruits and fresh squeezed juices.

The natives typically eat in small restaurants or Chinese eateries (“chifas”); a menu there includes a soup, a choice of main dish, and a drink.

If you count on international fast food chains, you will be disappointed. You find them almost nowhere except in the largest cities, and the prices are uniformly astronomical.

Peruvians are quite proud of their desserts, especially in Lima. Try them with care, since they tend to be extremely sweet and loaded with sugars, eggs yolks and similar ingredients. Try mazamorra morada, or purple custard, made from the same purple corn used for chicha morada drink; together with arroz con leche (rice with sweetened condensed milk) is called a combinado (combination). Picarones are a sort of donut, made from fried yams dough and served with chancaca, very sweet sugarcane syrup. And the sweetest dessert suspiro Limeño is perfect if you are in sore need of a high-calorie glucose shock. Panetón is a type of sweet bread with dried fruit. It is usually served for breakfast around Christmas with a cup of hot chocolate. They used to come in big boxes only with huge panetóns inside but now they also sell personal portions. Chocotón is variety of panetón that replaces the fruit with chocolate bits. The bread is very light and sweet. Because Christmas is the hottest time of year, people often replace the hot chocolate with coffee or a drink that’s served cold.

The Pisco-Nazca area is famous for wine cultivating. Their more expensive vintages compare favorably against Chilean imports. Beer is nice, stronger than American brands but less full bodied than European ones. Most of Peruvian beers are made by Backus, currently owned by SAB Miller.

When drinking at bars and/or restaurants, be aware that Peruvian “Happy Hour” is a little different than in most countries. Prices for drinks will usually be posted on the walls and be a little cheaper than normal. Also, most places leave their Happy Hour sign or flier up all day, so it’s always Happy Hour in Peru — so it’s more like a list of their special offers and change the meaning of Happy Hour entirely. The real difference is that you will be served 2 drinks, instead of one, for the listed price — giving a new meaning to the term “half price.” This can be a great way to save money (if you are traveling with a group) or to meet locals (if you are traveling alone). It can also lead you to get completely falling-down-drunk by accident, so be careful.

Caliente is a hot alcoholic drink served during celebrations in Andean towns such as Tarma. It’s basically an herbal tea with white rum for that added kick.

Chicha de Jora, A cheap traditional alcoholic drink made from corn that is fermented and rather high in alcohol content for a non-distilled beverage. Not normally available at formal restaurants and quite uncommon in Lima outside of residential areas. Places that sell chicha have a long stick with a brightly-colored plastic bag on it propped up outside their door.

Chicha morada, not to be confused with the previous one, is a soft drink made from boiled purple corn, with sugar and spices added (not a soda). Quite refreshing, it is widely available and very recommendable. Normally Peruvian cuisine restaurants will have their freshly made supply as part of the menu; it is also available from street vendors or diners, but take care with the water. Bottled or canned chicha morada is made from concentrates and not as pleasant as freshly-boiled chicha.

Coca Tea or Mate de Coca is a tea made from the leaves of the coca plant. It is legal to drink this tea in Peru. It is great for adjusting to the altitude or after a heavy meal. It may be found cold but normally is served hot. Beware that coca leaves are ILLEGAL in Paraguay, Brazil and in many places outside of South America. Therefore, be sure to DISPOSE of them if going to countries where they are illegal.

You can find many places that serve fresh fruit drinks. Peru has a wide variety of fruits since its natural variety, so if you get a good “jugueria” you will have lots of options to choose from.

The Peruvian amazon cities offer some typical drinks too as: masato, chuchuhuasi, hidromiel and others.

Coffee. Peru is the world’s largest producer of organic coffee. Ask for ‘cafe pasado’, the essence produced by pouring boiling hot water over fresh ground coffee from places like Chanchamayo.

All of Peru’s wines are inexpensive. Tacama, Ocucaje and Santiago Queirolo branded wines are the most reliable.

Emoliente. Another popular drink in Peru, often sold in the streets by vendors. Served hot, its flavor is best described as a thick, viscous tea, but surprisingly refreshing – depending on what herb and fruit extracts you choose to put into it, of course. Normally the vendor’s mix will be good enough if you choose not to say anything, but you’re free to select the mix yourself. Normally sold hot, is the usual after-party drink, as a “reconstituyente”, but it can be drunk cold too.

Inca Kola. The Peruvian equivalent of Coca Cola in the rest of the world, which was recently purchased by Coca Cola yet retains its unique taste. It is bright yellow and has its own unique flavor.

Pisco Sour. An alcoholic drink with an interesting ingredients list, such as egg whites, that is the main drink in Peru and is available in most places. It is made from Pisco, a peruvian kind of brandy that is worth a try; it is a strong drink as pisco is over 40° (around 70-80 proof) spirit, and the sweet taste can be deceiving. Since Chile tried to register the brand Chilean Pisco for commercial purposes, Peruvian producers decided to defend the denomination of origin (Pisco is a very old city in Peru) by being very strict about the quality standards. Be sure that you will find a very high quality product in any brand of Pisco made in Peru.

Some large towns have their own brand of beer which is hard to get elsewhere in the country. Cusqueña is one of the most popular beers while Cristal is known as the beer of Peru, both can be found nationwide.