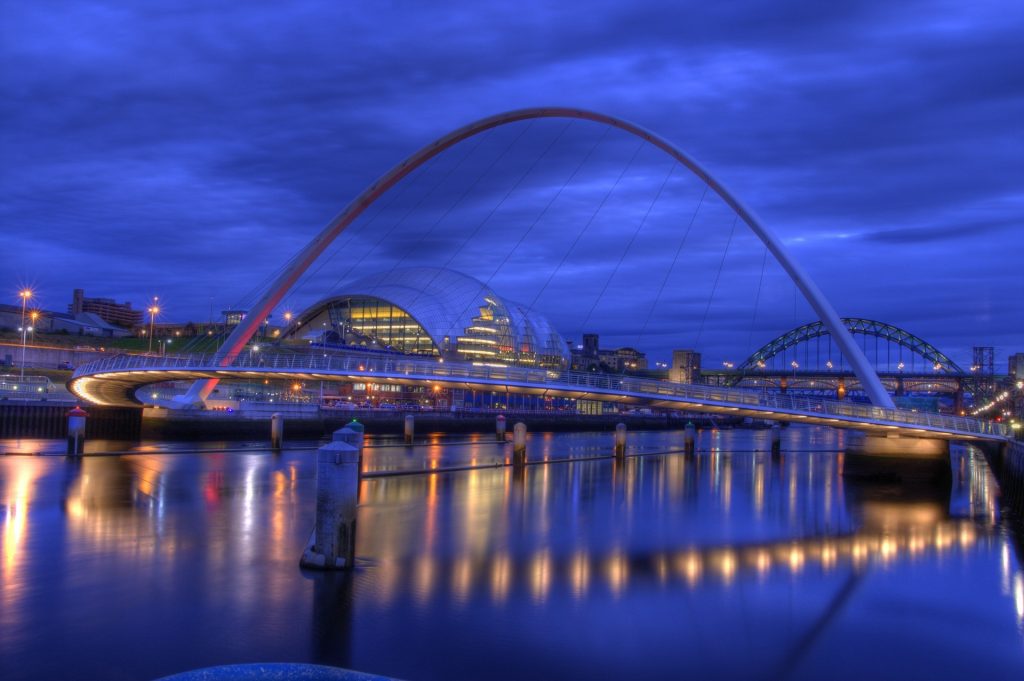 Explore Newcastle upon Tyne commonly known as Newcastle, a city in Tyne and Wear, North East England, 103 miles (166 km) south of Edinburgh and 277 miles (446 km) north of London on the northern bank of the River Tyne, 8.5 mi (13.7 km) from the North Sea. Newcastle is the most populous city in the North East, and forms the core of the Tyneside conurbation, the eighth most populous urban area in the United Kingdom.

The city developed around the Roman settlement Pons Aelius and was named after the castle built in 1080 by Robert Curthose, William the Conqueror’s eldest son. The city grew as an important center for the wool trade in the 14th century, and later became a major coal mining area. The port developed in the 16th century and, along with the shipyards lower down the River Tyne, was amongst the world’s largest shipbuilding and ship-repairing centers.

Newcastle played a major role during the 19th-century Industrial Revolution, and was a leading center for coal mining, ship building, engineering, munitions and manufacturing. Heavy industries in Newcastle declined in the second half of the 20th century; with office, service and retail employment now becoming the city’s staples. The city was recognized for its commitment to environmental issues, with a program planned for Newcastle to become “the first Carbon Neutral town”.

In 2010, Newcastle was positioned ninth in the retail center expenditure league of the UK. There are several major shopping areas in Newcastle City Centre. The largest of these is the Eldon Square Shopping Centre, one of the largest city center shopping complexes in the UK. It incorporates a Debenhams store as well as one of the largest John Lewis stores in the UK. This John Lewis branch was formerly known as Bainbridges. Newcastle store Bainbridge’s, opened in 1838, is often cited as the world’s first department store. Emerson Bainbridge (1817–1892), a pioneer and the founder of Bainbridges, sold goods via department, a new for merchant custom for that time. Eldon Square is currently undergoing a full redevelopment. A new bus station, replacing the old underground bus station, was officially opened in March 2007. The wing of the center, including the undercover Green Market, near Grainger Street was demolished in 2007 so that the area could be redeveloped.

The main shopping street in the city is Northumberland Street. It is home to two major department stores including the first and largest Fenwick department store, which houses some of the most luxurious designer labels, and one of the largest Marks and Spencer stores outside London. Both stores have entrances into Eldon Square Shopping Centre.

Other shopping destinations in Newcastle include Grainger Street and the area around Grey’s Monument.

Newcastle was in the top ten of the country’s top night spots. In the Tripadvisor Travellers’ Choice Destination Awards for European Nightlife destinations, four of the UK’s nightspots finished in the top 10; Newcastle was awarded 3rd Place behind London, and Berlin. Newcastle also came in seventh for the World category, and is confirmed to have the most events per student population in the UK.

There are concentrations of pubs, bars and nightclubs around the Bigg Market and the Quayside area of the city center. There are many bars on the Bigg Market, and other areas for nightlife are Collingwood Street, popularly referred to as the ‘Diamond Strip’ due to its concentration of high-end bars, Neville Street, the Newcastle station area and Osborne Road in the Jesmond area of the city. In recent years “The Gate” has opened in the city center, a new indoor complex consisting of bars, clubs, restaurants and a 12-screen Cineworld multiplex cinema. Newcastle’s gay scene – ‘The Pink Triangle’ – is centred on the Times Square area near the Centre for Life and has a range of bars, cafés and clubs.

The city has a wide variety of restaurants Italian, Indian, Persian, Japanese, Greek, Thai,Mexican, Spanish, American, Polish, Malaysian, French, Mongolian, Moroccan, Vietnamese and Lebanese. Newcastle is one of 7 cities in the UK that has a Chinese village with many Chinese restaurants on Stowell Street. There has also been a growth in premium restaurants in recent years with top chefs.

The city has a proud history of theatre. The original Theatre Royal in Newcastle was opened on 21 January 1788 and was located on Mosley Street. It was demolished to make way for Grey Street, where its replacement was built.

The city still contains many theatres. The largest, the Theatre Royal on Grey Street, first opened in 1837.

Watch a video about Newcastle