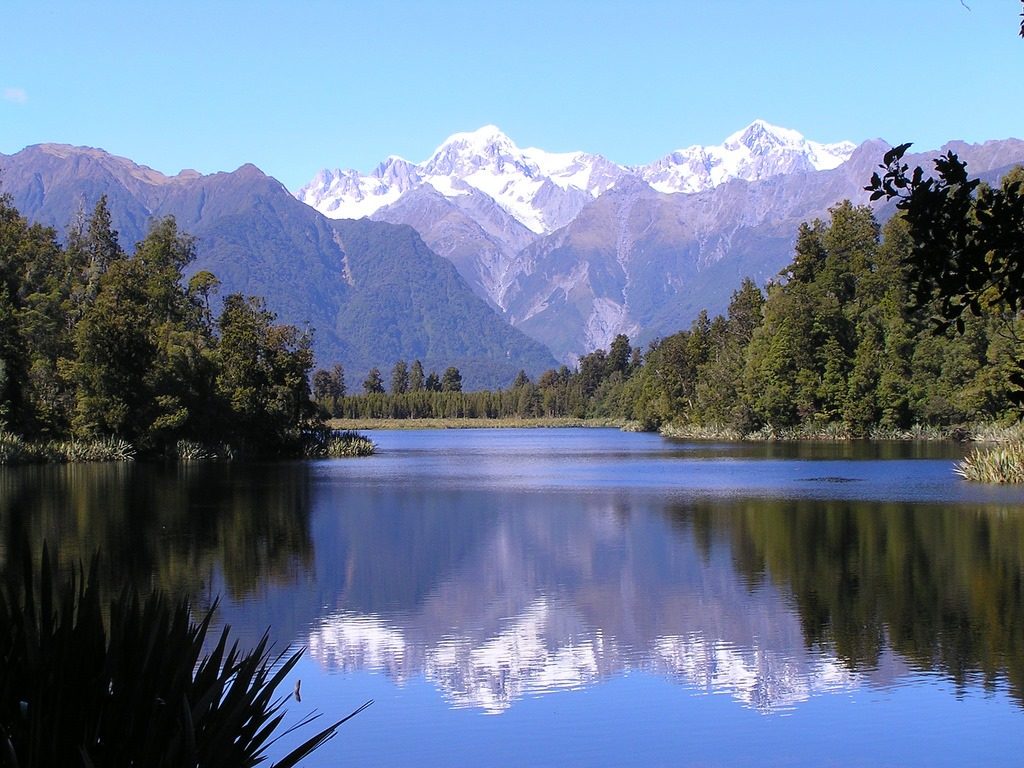 Explore New Zealand  a country of stunning and diverse natural beauty: jagged mountains, rolling pasture land, steep fiords, pristine trout-filled lakes, raging rivers, scenic beaches, and active volcanic zones. These islands are one of Earth’s most peculiar bioregions, inhabited by flightless birds seen nowhere else such as a nocturnal, burrowing parrot called the kakapo and kiwi. Kiwi is not only one of the national symbols – the others being the silver fern leaf and koru – but also the name New Zealanders usually call themselves.

These islands are sparsely populated, particularly away from the North Island, but easily accessible. There are sparklingly modern visitor facilities, and transport networks are well developed with Airports throughout the country and well maintained highways. New Zealand often adds an adventure twist to nature: it’s the original home of jet-boating through shallow gorges, and bungee jumping off anything high enough to give a thrill.

Māori culture continues to play an important part in everyday life and government and corporate symbolism with abundant opportunities for visitors to understand and experience both the history and present day forms of Māori life.

New Zealand has been called “God’s own country” and the “Paradise of the Pacific” since the early 1800s.

Consisting of two main islands – imaginatively named North Island and South Island and many smaller ones in the South Pacific Ocean, this archipelago lies 1,600km (1,000 mi) south east of Australia.

New Zealand is the fifth largest wholly island nation on earth, its land area surpassed only by Australia, Indonesia, Japan and the Philippines; NZ’s maritime Exclusive Economic Zone (EEZ) is fifteen times larger, being exceeded only by Australia in the preceding list.

With a population of nearly 4.5 million in a country larger than the United Kingdom, many areas are sparsely settled.

Be sure to allow sufficient time to travel in New Zealand. Distances are larger than you probably think and many roads wind along the coast and through mountain ranges (particularly on the South Island). It’s rewarding to tour for three or four weeks on each of the main islands, although you can certainly see some of the highlights in less time.

Auckland, with a population of around 1.5 million people, is the largest city in Polynesia.

New Zealand was the last significant land mass on earth to be settled by humans. East Polynesians reached New Zealand about 700 years ago in a series of tremendous oceanic canoe voyages to begin settlement of what was to become New Zealand – some 46,000 years after Australia.

New Zealand has a temperate climate – winters are fairly cold in the south of the South Island but mild in the north of the North Island. The nature of the terrain, the prevailing winds and the length of the country lead to sharp regional contrasts.

Here are the most prominent settlements:

Arrivals are by air or occasionally by sea (cruise ships into Auckland, Wellington, Nelson or Christchurch and the occasional private yacht. It is still just possible to book or even hitch a ride on the regular freighter circuits).

New Zealand is a long way from anywhere else in the world, so for most visitors, the only practical way to enter New Zealand is by air. Even the shortest flights between Australia and New Zealand take over 3 hours.

In order of traffic, international gateways are at Auckland, Christchurch, Wellington, Queenstown and Dunedin. Auckland services more than 20 destinations.

You can bring your own bike, as well as hire a bike in some of the larger cities.

Auckland, Wellington and Christchurch have special facilities for re-assembling bikes that have been crated.

You must wear a helmet while riding; otherwise you will be fined on the spot. When hiring a bike you should be supplied with a helmet.

Buses are a relatively cheap and environmentally friendly way to get around New Zealand; however, services even between major towns are usually only once per day. Most roads in New Zealand are quite narrow and winding and travelling a long distance in a bus can be a safe and relaxing way to travel.

You can reach most of New Zealand’s sights in a normal, two-wheel-drive car or camper van. The volume of traffic is normally low and drivers are usually courteous.

Traffic drives on the left in New Zealand.

It can be said that in New Zealand it’s the countryside that’s magnificent, and perhaps no more so than the Southern Alps of the South Island. In the Mackenzie Country of Canterbury, the snow-capped jagged peaks rising above turquoise lakes have provided the inspiration for many a postcard. Tucked in behind is the country’s highest peak, Aoraki Mount Cook. The lakes and mountains continue south, becoming a stunning backdrop for the towns of Wanaka, Queenstown and

Another region where mountain meets water with striking effect is Fiordland National Park where steep densely forested mountains rise from the sea. The most accessible, and possibly most beautiful spot, is Milford Sound. The road in is spectacular and the view even more so when you arrive.

Glaciers may not be the first thing that comes to mind when you think of an island in the South Pacific, but New Zealand has several. The most notable are the Fox and Franz Josef glaciers in Westland National Park. These glaciers are unique in how close they get to sea level and are sustained by the enormous amount of precipitation that falls on New Zealand’s west coast.

New Zealand is a geological hotspot and has many dormant and active volcanoes, geysers and hot springs. The best place to start is Rotorua, where the smell of sulphur lets you know you’re close to the action. The surrounding countryside has many parks with geysers and hot springs, and Mount Tarawera, the site of one of New Zealand’s more famous eruptions, lies a short drive away.

South of Rotorua is Taupo and Lake Taupo, which was formed in a massive volcanic explosion thousands of years ago. Beyond Lake Taupo is Tongariro National Park, dominated by its three volcanoes, Tongariro, Ngauruhoe and Ruapheu. All three mountains are still active (Ruapehu last erupted in 2007) and Ruapehu has a crater lake that can be viewed with a bit of hiking. Ngauruhoe is famous for filling in as Mt. Doom in the Lord of the Rings trilogy.

North of Rotorua is Whakatane, with tours to White Island, a volcanic island just off the coast. The island is truly a different world with its smoke plume, green crater lake and the pohutukawa trees clinging to a fragile existence on the volcanic rock.

Being so remote, New Zealand has very unique plants and animals. One of the most impressive is the kauri tree, one of the biggest species of tree in the world. Few of these giants are left (a result of overlogging), but a visit to the Waipoua Forest in Northland will afford a glimpse.

The beaches of the South Island, particularly The Catlins and the Otago Peninsula, are good places to see marine animals such as penguins, seals and sea lions in their natural habitat. The Otago Peninsula is also noted for its albatross colony.

While the countryside is the main attraction of New Zealand, you’ll need to visit a few cities to see the truth of that. Auckland is a pleasant city with its waterfront districts like the Viaduct Harbor and Mission Bay, old volcanoes (Mt Eden and One Tree Hill), a handful of museums and the Sky Tower, the tallest free-standing building in the Southern Hemisphere. The more interesting architecture and the fine Te Papa museum can be found in Wellington, the nation’s capital. Napier is worth a stop for its Art Deco CBD, and Christchurch was interesting for its English character along the banks of the River Avon before the destruction wreaked by earthquakes. Nelson is the arts, crafts, pottery and craft brewing capital and has the only European style cathedral left standing (called “Christ Church Cathedral”); it doesn’t hurt that Nelson has great beaches and is surrounded by three national parks.

What to do in New Zealand

English, Māori and New Zealand Sign Language are the official languages of New Zealand. English is universal and is officially written with Commonwealth (British) spelling.

Currency used in New Zealand is the New Zealand Dollar (NZD). Other currencies are not readily accepted other than at some of the larger hotels and at banks throughout New Zealand. Attempting to make a transaction in a foreign currency may result in some light hearted bemusement.

On Christmas Day, Good Friday, Easter Sunday, and before 1PM on Anzac Day (25 April), all but a few essential businesses must be closed. While many traders flout this regulation, the matter has for many years been being reviewed by the government. If you are in New Zealand on one of these days, ensure you have all your needs met prior to the date.

New Zealanders are amongst the highest users of electronic banking services in the world. Automatic teller machines (ATMs), locally known as ‘the hole in the wall’, are available in just about every town, even those without a bank.

What to eat in New Zealand

New Zealand has a distinctive cafe culture, with arguably some of the best espresso on the planet. Cafes often have excellent food, serving anything from a muffin to a full meal

What to drink in New Zealand

The emergency telephone number in New Zealand is 111.

Ambulance, Fire, Police, Coastguard and Marine and Mountain Rescue can all be rapidly contacted via this one, FREE, emergencies only number.

This number (or 112 or 911) also works from mobiles – even when there is no credit available and even if no SIM card is present at all!

Severe weather is by far the most common natural hazard encountered in New Zealand. Although New Zealand is not subject to the direct hit of tropical cyclones, stormy weather systems, from both the tropics and the polar regions, can sweep across New Zealand at various times of the year.

There are other natural hazards you may encounter, though far more rarely:

Mobile telephone coverage is effectively only national near urban areas. The mountainous terrain means that, outside these urban areas, and especially away from the main highway system, coverage has huge dead patches.

Do not rely on mobile phones in hilly or mountainous terrain – especially in the South Island.

Watch a video about New Zealand