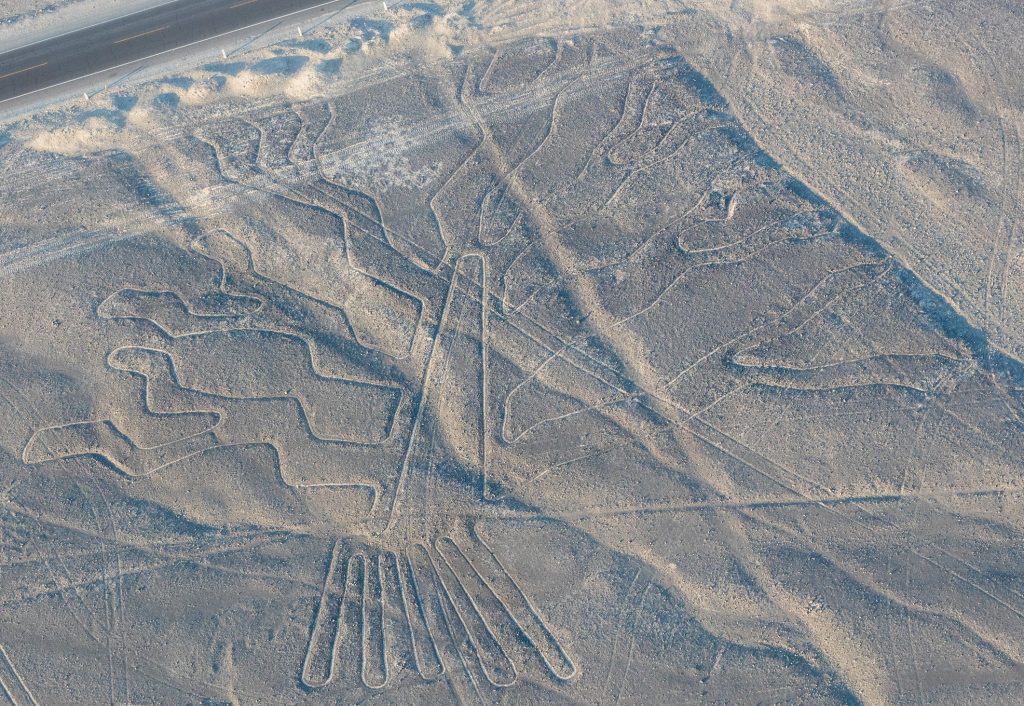 Explore Nazca a town in Peru‘s Southern Coast region. It is most famous for the so-called Nazca Lines, a mix of long lines, geometrical figures, and giant drawings in the desert sand. In 1994, they were designated as a UNESCO World Heritage Site.

Today’s Nazca town is on the site of where the ancient Nazca civilization was based after the fall of its first capital, Cahuachi, in around AD 400. It has an exotic, dusty, desert setting but holds little enchantment in itself. It can provide between a few hours’ and a few days’ entertainment depending on one’s interest in the ancient Nazca people.

For much of their history, the Nazca people were based in the Ceremonial City of Cahuachi, an ancient pilgrimage center 28 km southwest of modern Nazca. The society emerged in around 100 BC and was active until around AD 750. Its influence stretched from Cañete in the north to Acari in the south. The lower section of the Nazca Valley was likely chosen to situate Cahuachi due to its abundant underground water, which allowed extensive irrigation for improved agriculture.

This civilization was responsible for the famous Nazca lines, giant representations of animals and other designs that are also seen on Nazca pottery and textiles found at Cahuachi. Discovered pottery fragments also suggest that the Nazca people gathered in the desert to perform religious ceremonies, with objects being smashed as offerings to the gods in the sky. The fragments found in the desert among the Nazca Lines are mainly pieces of panpipes and whistles, suggesting the importance of music in the religious rites.

A series of natural disasters, climatic and tectonic, began to undermine the civilization in around AD 350. An earthquake finished the capital, Cahuachi, in around AD 400, leaving the society to limp into oblivion for the next few centuries from its new base in what would become modern Nazca.

Nazca culture first aroused academic interest through its pottery. In the 1890s, archaeologist Max Uhle was studying ceramic samples at the Anthropologisch-Ethnografische Museum in Dresden. The consignment contained many works from South America, including some striking and colorful work from the Nazca people. In 1901 he travelled to Peru to examine their origins. After months of searching he arrived at the Valley of Ica at a place called Ocucaje, where he met farmers who told him about the ancient cemeteries where these colorful ceramics were frequently found. Uhle excavated the sites and found Nazca ceramics at many of them. His work introduced Nazca culture to the wider world.

Discovery of the Nazca lines

The Nazca Lines were first spotted when Faucette, an early Peruvian airline, began flying from Lima to Arequipa in the 1920s. The pilots noticed lines criss-crossing the desert between the valleys of Palpa and Nazca.

The pilots’ discoveries led Toribio Mejia Xesspe, an archaeologist, to come to Nazca in 1926. His research arrived at the conclusion that the lines were part of ancient sacred roads. Xesspe never flew over the area and so only saw straight lines; he missed the figures.

A more worthy discovery of the lines was made in 1939 by Paul Kosok of Long Island University. Kosok came to Nazca to study the ancient irrigation systems, the puquios (see below). He surveyed the channels and noted that over 50 of the underground aqueducts were still in used. He was told of other, even older, ancient channels and so set out to the Nazca desert but found only long shallows furrows. He thought that perhaps these other ancient channels were located very far away and so hired a small crop-dusting aircraft to go and find them. On the flight he saw hundreds of lines and geometrical forms in the desert. He later recalled asking the pilot to follow one particular line and being somewhat surprised at it leading to a bird! Kosok later met Maria Reiche, who then devoted her life to studying and preserving the lines.

After the fall of Cahuachi, the Nazca people still achieved some notable, though oft overlooked feats. An extensive series of underground channels, the puquios (a Quechua word to describe a natural spring), are one of the greatest legacies of the Nazca culture. This underground system is unique in South America, and perhaps the world, because of its very intricate construction. Over 50 underground channels were built over one hundred years starring in AD 400; many of them are still in use! Some of the best preserved channels are at Cantalloc, also known as Cantayo, where visitors can see a series of spiral blow holes, which were probably used to allow cleaning of the channels’ interiors and also to restore them after earthquakes.

The cemeteries along the Nazca River contained the colorful ceramic works that first drew attention to the Nazca people. The high-quality work on vessels shows realistic and complex depictions of the ancient Nazca world: everyday life, animals, plants, fruits, birds, insects and gods are all represented. Vessels showing stylized creatures, including zoomorphic and anthropomorphic designs, sometimes contain over ten colors. Bridge-handle bottles with two landfills are the most common find, but spherical pots were also produced, as well as cups and glasses. The best examples of Nazca ceramics are in museums, such as the Museo Arqueologico Antonini in Nazca, the Anthropological and Archaeological Museum in Lima, the Regional Museum of Ica, and many others in Peru and around the world.

The Nazca people’s belief in life after death led to mummification of their corpses. The shrouds wrapping the dead were fine textiles, which still retain their quality and colors. The Nazca people, like many other pre-Inca peoples, believed textiles to be spiritually important, leading their textiles to be skillfully produced and depicting sophisticated artistic scenes on fabrics of cotton and the fiber of Andean camels. Samples from the ancient capital of Cahcuachi can be seen at the Museo Arqueologico Antonini in Nazca.

If you’re traveling in a small group (2-4 people), it’s fairly easy to arrange a one day all-inclusive side trip to Nazca from Lima with private transportation. One-day trips are generally paired with a stop in the Ballestas and include the airplane ride to see the lines. A private trip isn’t particularly cheap, but can be worth it if you really want to see the lines and don’t have a lot of time in Peru. One-day trips from Lima leave early (around 4:00 AM) and return late (around 10:00 PM).

Getting around in Nazca is easy. You can walk almost anywhere.

The big hassle in Nazca are the touts that hang out at the bus stations and on the streets. They represent shady or nonexistent hotels and travel agents claim to work for your hotel or to offer cheap flights for viewing the Nasca lines. Ignore them and have your hotel pick you up from the bus station.

What to see. Best top attractions in Nazca, Peru.

Museo Arqueologico Antonini, Av de la Cultura 606 (follow Jr Bolognese about 1km east). Informative museum about the surrounding archaeological sites. It also has a collection of pottery and textiles. In the garden there is a working aqueduct and a scale model of the lines.

Nazca channels or puquios at Cantalloc The pre-Inca Nazca people developed a system of underground aqueducts to irrigate the dry lands that lacked surface water. Therefore despite the harsh desert climate, the Nazca region hosts fields of cotton, corn, beans, potatoes and fruit still watered by over 30 of these underground channels. Nearby are various geometric lines etched on the desert. There are also the Inca ruins of Paredones.

Cemetery of Chauchilla For many years the Chauchilla Cemetery was looted by treasure hunters, who destroyed the place completely, taking away all the treasures the mummies kept in their tombs for centuries. Grave robbers just left behind the corpses, which can be seen today all over the ground. In addition to skulls and bones, visitors also can see several tombs centuries’ old, as well as long human hairs, ceramic fragments and others remains scattered on the desert surface. It is the only archeological site in Peru, in which ancient mummies are seen in their original graves, along with ancient artifacts, dating back to 1000 AD. This archaeological excursion is combined with the visit to a Nasca Ceramic workshop, where visitors will learn about the old technique of making Nasca pots and also a visit to the gold extraction centre to see an old way of extracting gold using huge mortars.

The Nazca Lines are the star (and only) attraction. Scattered over 500 km² of an arid plateau between the Nazca River and Ingenio River, they are huge representations of geometric patterns, animals, human figures and thousands of perfectly straight lines that go on for kilometers. They were created by removing surface stones, revealing the lighter-colored soil below. They’re unquestionably ancient (dating back 1400-2200 years), and remarkably precise (with straight lines and clean curves). The images are so huge that they are only appreciable from the air, a fact which has led to speculation that the ancient Nazca people either had access to hot air balloons or alien helpers. Most academics attribute the lines’ precision to low-tech surveying techniques, but nobody actually knows who made them or why.

From 2013 the flight prices and number of operators have been consolidated due to a number of accidents dating back a few years. Only a handful of operators offer flights, including transport both ways from the city center. You can book your flights directly at the airport, or in the official agencies. There are also new air tours with personalized door-to-door pick-ups available through AndesTransit

There is an observation tower along the Pan-American highway with a view of three of the figures and a lookout on a mountain. If you get airsick, this is the way to go. You can go there by tour, public transportation, hitchhiking, or taxi. Buses from Nazca to Flores, Cueva or Soyuz pass the tower. Flag a bus down for the trip back to town.

It is illegal to walk on or near the line figures. Doing so disturbs the dark colored stones that form the background of the images and damages what the Peruvians now consider a great cultural heritage.

For fast and cheap street food try one of the stands at the south-east corner of the Plaza de Armas.

The restaurants you find all over town that are used by natives offer a full menu (soup, a choice of 3-5 main dishes, and a drink).

There are various travel agents in town though having an office in Nazca does not guarantee trustworthiness. Be very careful and never buy from people that address you on the street or wait the bus stop.

If you think that the Peruvian government is worthy of your money, only work with tax paying business that will give you a legal tax invoice (called either a “boleto” or a “factura”). This document will have the name of the business and their VAT number printed on it, together with a unique number.

Watch a video about Nazca