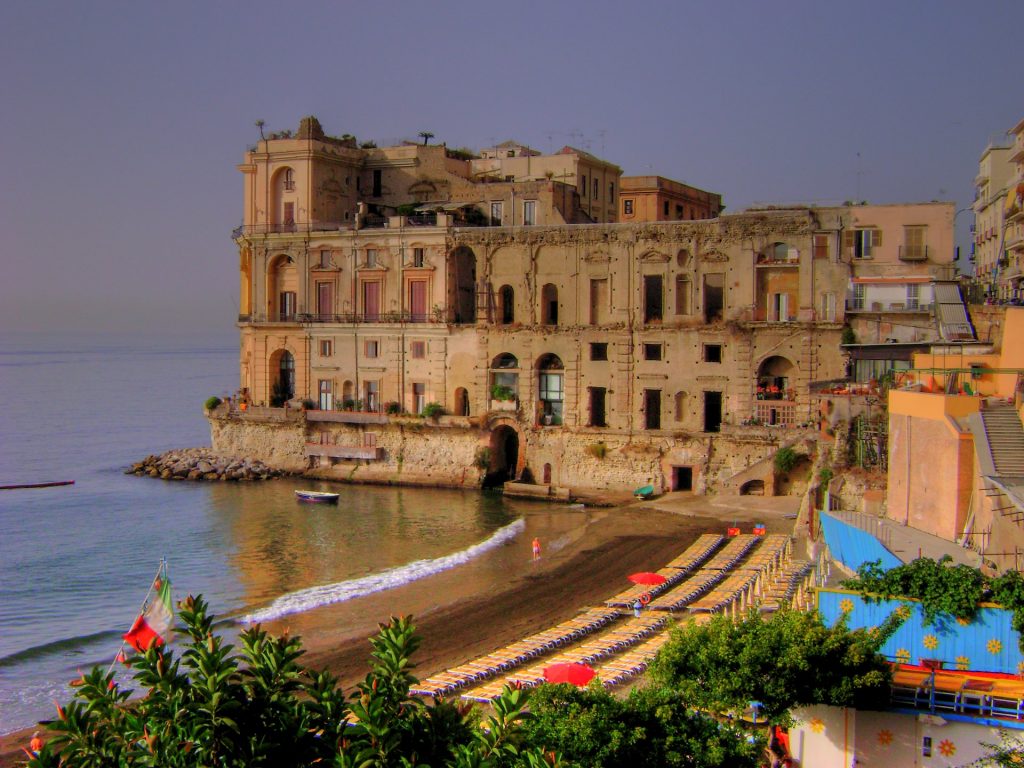 Explore Naples in Italy, the capital of the Campania region. The city is the third most populated municipality of Italy, but the second metropolitan area, after Milan. It was founded between the 7th and 6th centuries BC by the Greeks and was named Neapolis, which means new city. The historic centre of Naples has earned the UNESCO World Heritage Site denomination. It has one of the biggest historical city centers in the world, and its pride is the 448 historical and monumental churches, the highest number in the World for a single city.

A vibrant city with plenty to see and do, a city where the large influxes of tourists like in Rome, Venice, Florence etc… Have not happened and have thus allowed the city to retain much of its original culture, allowing you to visit a hidden gem just 2 hours south of Rome. Its territory, particularly the iconic sight of the gulf of Naples (but also Mount Vesuvius, the music, etc.) is arguably one of the most powerful symbolic images of Italy.

Naples used to be divided into 30 quartieri (neighborhoods), however today these neighborhoods don’t hold much administrative use but are still used by locals to refer to parts of the city. Nowadays the city is divided into 10 municipalities.

The most widely spoken language in Naples is Italian or a mixture of Italian and Napulitano (Neapolitan). Spanish and French words are understood by the locals. English is the most commonly spoken foreign language, although the average knowledge of English is far from excellent.

The city of Naples is thought to be one of the oldest continually inhabited cities on the planet, but its recorded history began when Greek settlers established colonies in the area during the second millennium B.C. Later, another colony, called Parthenope, was founded by more Greek colonists from the Aegean island of Rhodes during the ninth century B.C. Parthenope eventually declined, however, and the true beginning of Naples (as such) was found in the New Greek settlement called Neapolis during the sixth century B.C.

The climate of Naples, Italy falls within the category of “Mediterranean,” meaning that its winters are mild and rainy while its summers are hot and dry. Naples also qualifies as a “subtropical” climate since its average summer days register a mean of 23º C.

Naples is directly connected with Rome by the A1 highway, and the trip takes generally less than 2 hours.

You will be surprised how easily you can get around by foot, too. Interesting spots are almost on every corner and most distances – especially in the (historic) centre – are small and can easily be walked in a matter of minutes.

What to see. Best top attractions in Naples, Italy.

In Naples, some may find the actual conditions of many buildings and streets, and the rampant graffiti, off-putting. Others claim this is “the immense character and culture of Napoli…and even the dirt and grime has its own flavor…a Neapolitan recipe for reality, and great fun”. Naples’ peculiarity is that the city centre is not the elegant part of the city. Just do not expect in the city centre the pristine conditions of many other major European cities, since the historical centre, unlike most European cities, is not the “downtown”. If you want to visit the elegant part of the city, you can walk around the wonderful lungomare (the Riviera di Chiaia or Via Francesco Caracciolo), and visit Via dei Mille and Vomero hill (main shopping areas). What to see in Naples.

What to do in Naples, Italy

Naples has an abundance of attractions and activities that await its annual tourists. There is no way to list them all here, but below are some of the most popular things to do in Naples:

Naples is famous for its outdoor markets and small shops (the city has an impressively high number) and that is where many tourists prefer to spend most of their shopping time. However, it also has other retail establishments of note, such as shopping malls and wine vendors. You can find expensive, upscale items, rare antiques, handcrafted clothing and souvenirs, and just about anything else you are looking for in Naples — and much of it at prices much lower than in Western European nations.

Pizza comes from Naples. Look for pizza margherita, the original one, with nothing more than fresh tomatoes, basil, fresh mozzarella and a little olive oil. Eating a pizza in Florence or in Rome is not the same as eating it in Naples! Here the dough is thicker and is a little chewy.

In general it is easy to find a good pizzeria, just look for one without tourists!

Neapolitan cuisine in general features much seafood, befitting its status as an ancient and still functioning port. You will find many sauces based on garlic sauteed in extra-virgin olive oil, tomatoes, and local red wines. Some of the more popular sauces are arrabbiata (“angry”) or fra diavolo (“Brother Devil”), which means they will contain hot pepper. It’s great cuisine. Enjoy!

Mozzarella is also typical of the region, you should not miss the opportunity to taste the fresh real one!

The city and region are also famous for their pasticceria (pastries), including:

Pretty much anywhere that serves coffee will have some pastries, nutella-filled croissants or other sweets available.

Naples is becoming increasingly popular with a younger generation of both Italians and foreigners. In spite of false and stereotypical reports of adverse conditions, they flood into the city and lend renewed vitality to its nightlife. The hippest scene is around the bars and cafes on Piazza Bellini, Piazza Santa Maria la Nova and Piazza San Domenico Maggiore, becoming busy after about 11PM. You should also try the area around Piazza dei Martiri, expecially Vico Belledonne a Chiaia, where you can find many crowded bars, a wine bar and lots of young people, especially at weekends. However, if you are looking for a American/English/Northern European drinking establishments you may be hard pressed to find what you are looking for as that culture is frowned upon in Naples. There are a variety of small drinking establishments but if you’re looking for a crowded beer hall, Irish pub, or an American college-style dive bar, you’ll have trouble finding one.

If you’re in Naples and wondering what local beverages to try, the first answer is that Naples is as famous for its extra-strong, semi-sweet coffee as it is for its pizza.

For those who would like to try the local beer and wine, there are an abundance of options. Beer bars were once rare, beer being traditionally sold with and consumed in pizza parlors, but now they are more common. Wine bars are classic in Naples, which is not surprising since it is the capital of Campania, a major wine-producing region. There are many local varieties of wine you may wish to sample, but the Aglianico is peculiarly appropriate. Aglianico black grapes are grown throughout southern Italy, but Campania provides them with their ideal soil and growing climate.

Some of the main areas of Naples where bars and cafes serving beer and wine are concentrated include:

Besides the bars in Piazza Bellini, Santa Maria la Nova, Piazza San Domenico Maggiore, Via Carlo Poerio, Vico Belledonne a Chiaia there are also plenty of great nightclubs and beach clubs outside but not far from the historic center of Naples.

If you wish to try something outside Naples, during the weekend Pozzuoli is packed with bars around the old port (mainly, but not only on Largo San Paolo and parallel streets) and main square (Piazza della Repubblica), where you will find hundreds of young people hanging out in front of bars loudly chatting with their friends along with some drinks.

Bacoli and Miseno also have some great venues where young people like to go. In Miseno there are some lounge bars on the beach, which are popular during summer weekends.

Watch a video about Naples