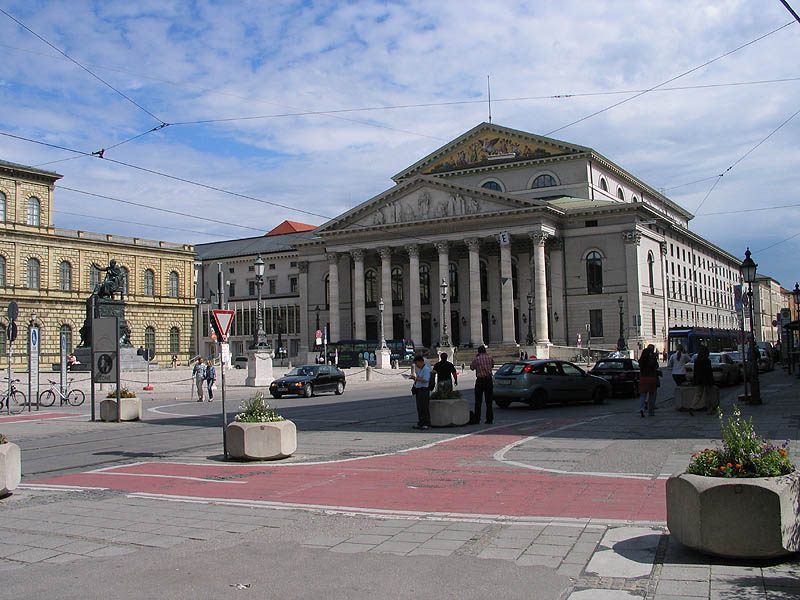 The City Center is usually defined as the area within the old city fortifications, now most distinctly recognizable by the traffic loop known as the Altstadtring, although there are many portions of the historical walls still visible. Many of the main tourist attractions can be found in the City Center. Most notable are of course the New City Hall (Neues Rathaus) with the world famous Glockenspiel, the Old City Hall, the Feldherrenhalle, the Residenz (former residence of the Bavarian kings), Nationaltheater (the opera house) and the world’s most famous beer hall, the Hofbräuhaus am Platzl. Several historic churches such as the Frauenkirche, Asamkirche, Peterskirche and Theatinerkirche are also located in the city center. Three of the historic city gates still exist: Karlstor (at Stachus), Isartor and Sendlinger Tor (all are located at U-Bahn or S-Bahn stations). Several of Munich‘s major shopping areas are located in the City Center. This includes Neuhauser Strasse and Kaufinger Strasse with department stores and branches of international fashion chains, the luxury shopping areas around Maximilianstrasse, Theatinerstrasse, Residenzstrasse and Brienner Strasse and Viktualienmarkt with the adjacent Schrannenhalle, where merchants offer fresh and specialty products in small market booths.

Maxvorstadt is the upscale academic and arts district just north of the historic city center. The University of Munich (LMU) and the Technische Universität München (TUM), Germany‘s two top universities, as well as several other educational institutions are located in the area. Furthermore, you can find a couple of world-class art museums such as the famous Pinakotheken, Museum Brandhorst, the Lenbach Haus as well as the Glyptothek and the Staatliche Antikensammlungen. The latter two of these museums are housed in Ionic and Corinthian buildings, which form together with the Doric Propylaea the picturesque Königsplatz square. A high number of art galleries can be found in Maxvorstadt too. Because of its high density of artistic and scientific institutions, Maxvorstadt is often referred to as the Brain of Munich. The area is also full of little shops, bars and restaurants.

This trendy but charming neighborhood immediately beyond the Ludwig-Maximilian Universität is filled with small cafés, expensive but impressive shoe and fashion stores, specialty bookstores, galleries and specialty restaurants from around the world. Schwabing has always been an “in” place to live and was the home of many artists and other personalities including writers Thomas and Heinrich Mann, painters Wassily Kandinsky and Paul Klee, revolutionary Wladimir Iljitsch Lenin and physicist Werner Heisenberg. Looking at the shady tree-lined boulevards, it is not difficult to imagine why. Leopoldstrasse offers extensive sidewalk cafes, bars and restaurants where you can relax after going shopping in Hohenzollernstrasse and the area around Kurfürstenplatz. The English Garden, a vast urban park with several creeks, lakes and beer gardens, in the east of Schwabing is the main recreational area for Munich’s residents and a must-see for any Munich visitor.

Built on Munich’s former airport Oberwiesenfeld, this is the area of the 1972 Olympic Games. If you climb to top of the hills piled up from debris of World War II, you will have a great overview of the area. This is especially worthwhile if there is a concert in the Olympic Stadium. The Olympic site itself is extremely beautiful and the ride to the top of the Olympic Tower is un-missable as it gives magnificent views of the city and the Bavarian Alps on clear days. Located just a short stroll from the park is the BMW World and BMW Museum inside a futuristic building and the BMW headquarters, which mimics the shape of four cylinder heads. There you can also tour one of the assembly plants of Bavaria’s iconic car maker.

One of the more relaxing districts, where the atmosphere causes residents and visitors alike to forget they are in a city of over a million. Take trams 12, 16 ,or 17 and get out at Romanplatz, or get out at Rotkreuzplatz and relax in a beer garden, or enjoy some ice cream or a bite to eat at one of the many nearby restaurants. Both of these neighborhoods are virtually undiscovered by tourists even though Neuhausen is home to a popular night club and the world’s largest beer garden. What’s more astounding is that, while millions of tourists flock to Munich in the summer months and September and October for Oktoberfest, few find their way to the tranquil Schloss Nymphenburg gardens where you can tour Nymphenburg palace or just stroll through the palace gardens. On the north eastern side of the park you can find the botanical garden (“botanische garten”).

This district consists of two rather different areas Ludwigvorstadt and Isarvorstadt: Ludwigvorstadt is the area just south of Munich’s central station. This area has a large immigrant population and is full of small grocery stores offering fresh fruit and vegetables as well as Oriental and Asian specialties. The area may look initially a bit raunchy to visitors due to the presence of a number of adult stores, gambling halls and strip clubs. However, it is perfectly safe and a good bet if you are looking for authentic Asian and Middle Eastern restaurants. Last but not least Theresienwiese, the site of the famous Oktoberfest, is located in the southwest of Ludwigvorstadt. The centerpiece of gorgeous Isarvorstadt is the Gärtnerplatz, a landscaped urban square arranged as a roundabout. The square is home to cafés, bars and the Staatstheater am Gärtnerplatz, one of Munich’s prime theater locations. Bordering southwest to Gärtnerplatzviertel is the Glockenbachviertel, which is the most vibrant part of Isarvorstadt, with bars, restaurants, and nightclubs straddling Blumenstraße, Müllerstraße, Hans-Sachs-Strasse and Klenzestrasse. The Glockenbachviertel and the Gärtnerplatzviertel are also the focal point of Munich’s gay community, with gay bars and clubs located primarily along Müllerstrasse.

The district around the Munich East station (Ostbahnhof) is well-known for its clubbing area Kultfabrik (formerly known as Kunstpark Ost, most locals will be familiar with the old name), where you can party in more than 30 bars, clubs, and discos. Also check out the many bars and restaurants in the Optimolwerke right next door. There are also several quaint side streets in this quarter featuring small houses virtually unchanged in several hundreds of years especially in the beautiful French Quarter around Orleansplatz.

This area consists mainly of residential areas. The Eastern banks of the river Isar are a recreational area for many residents of Munich. The zoo Hellabrunn is located here and in warm summer nights many bonfires are lit on the Flaucher, sand banks of the Isar. The Bavaria Filmstadt (movie studios and movie-themed entertainment park) is located a bit further south just outside the Munich city borders in the posh celebrity-suburb Grünwald.