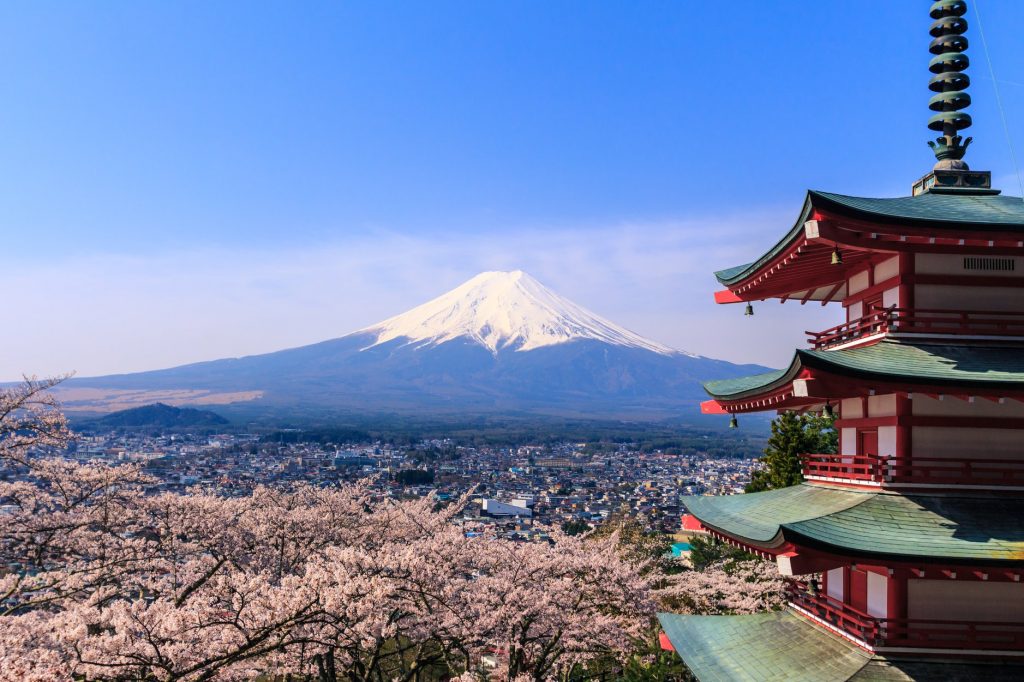 Explore Mount Fuji or Fuji-san, which is Japan‘s highest mountain and the focal point of the sprawling Fuji-Hakone-Izu National Park. Visible from Tokyo on a clear day, the mountain is located to the west of Tokyo on the main island Honshu, straddling the border between Yamanashi and Shizuoka prefectures.

Mount Fuji (Fujisan), located on Honshū, is the highest volcano in Japan at 3,776.24 m (12,389 ft), 2nd-highest peak of an island (volcanic) in Asia, and 7th-highest peak of an island in the world. It is a dormant stratovolcano that last erupted in 1707–1708. Mount Fuji lies about 100 kilometers (60 mi) south-west of Tokyo, and can be seen from there on a clear day. Mount Fuji’s exceptionally symmetrical cone, which is snow-capped for about 5 months a year, is commonly used as a symbol of Japan and it is frequently depicted in art and photographs, as well as visited by sightseers and climbers.

Mount Fuji is one of Japan’s “Three Holy Mountains” (Sanreizan) along with Mount Tate and Mount Haku. It is also a Special Place of Scenic Beauty and one of Japan’s Historic Sites. It was added to the World Heritage List as a Cultural Site on June 22, 2013. According to UNESCO, Mount Fuji has “inspired artists and poets and been the object of pilgrimage for centuries”. UNESCO recognizes 25 sites of cultural interest within the Mount Fuji locality. These 25 locations include the mountain and the Shinto shrine, Fujisan Hongū, Sengen Taisha, as well as the Buddhist Taisekiji Head Temple founded in 1290, later immortalized by Japanese ukiyo-e artist Katsushika Hokusai.

An almost perfectly symmetrical volcanic cone, the mountain is a near-mythical national symbol immortalized in countless works of art, including Hokusai’s 36 Views of Mt. Fuji.

Before the tourists go to the 5th level of the Mt Fuji, they must visit the Murayama Sengen Jinja temple because Japanese people believe that Mt Fuji is a sacred mountain firmly connected to God. They believe that the people in the past came to worship at Murayama Sengen Jinja to have good things in life. This temple is very old. It was built 1000 years ago. Some people like to see Cherry blossoms on the temple garden. The Fuji Gen temple is located at the foothill of Mt Fuji and people most visit it feel safe. Tourists usually take a trip to all five lakes that are near the temple.

The official climbing season lasts for only two months, from July to August. Even during these months, when Tokyo often swelters in 40°C heat, temperatures at the top can be below freezing at night and climbers must dress adequately.

Climbing outside the official season is extremely dangerous without alpine climbing experience and equipment. Nearly all facilities are closed in the off season. The weather, unpredictable any time of year, is downright vicious in the winter (temperatures below -40°C have been reported up top) and there are cases of people being literally blown off the mountain by high winds. All roads to the 5th station are shut out of season so you will have a long walk up. But if you insist, you’re strongly encouraged to at least file a climbing plan with the Yoshida police.

Fortunately, there are a few options for those who are not fit enough to climb or who would like to get “up close” to the mountain in the off-season. The trails at the bottom of the mountain are less steep, and suited more for an afternoon hike at any time of the year. The nearby Fuji Five Lakes (Fuji-goko) has many attractions close to the mountain, and Hakone also provides spectacular views. In a less nature-focused branch of things to do, the city of Fujiyoshida, which contains much of the mountain, is also home to Fuji-Q Highland, a leading amusement park.

What to see.  Best top attractions in Mount Fuji,  Japan.

The thing to do on Mt. Fuji is, of course, to climb it. As the Japanese say, a wise man climbs Fuji once, and a fool twice, but the true wisdom of this phrase is usually only learned the hard way. Athletes have completed the climb in under two hours and there’s even a yearly race to the top, but for most people it takes 4 to 8 hours at walking speed (depending on your pace), and the descent another 2 to 4. An overnight climb in order to reach the top for the sunrise (go-raiko) is the most traditional thing, but you will probably be shuffling along in a slow-moving line for the latter stages of the ascent. Consider starting out in the late morning to reach the summit for the equally majestic sunset, with a tiny fraction of the crowds to accompany you. Afterward, you can try to sleep in a mountain hut (see below) and catch the sunrise if you like; two for the effort of one.

An absolute minimum set of clothing for climbing Fuji would be:

Do NOT wear shorts. Such a bad idea.

Gloves and warm, layered clothing are also strongly recommended. Other supplies you will need are:

Also bring along at least 1 litre of water per person, preferably 2. High-energy snacks (Calorie Mate) as well as a more substantial fare (rice balls and such) will also come in very handy.

The most popular starting point is Kawaguchiko 5th Station (Kawaguchiko Go-gōme, 2305m), which offers you a last chance to stock on supplies (at a premium) before heading out. The initial stretch through flowery meadows is pleasant enough, but the bulk of the hike is a dreary and interminable slog: the volcanic landscape consists of jagged red rock in varying sizes from dust to boulder, with the trail zigzagging left and right endlessly, and the hike just gets steeper and steeper as you progress. Actual rock climbing is not required, but you will wish to use your hands at some points for support — bring gloves. (If you forget them, they can be purchased in the shops at the Fifth Station for ¥200.)

The trail is well marked (even at night) and in season you will find it difficult to get lost, as the trip is completed annually by 300,000 people and there may even be human traffic jams at some of the dicier spots. However, due to the danger of landslides do not venture beyond the trail; visibility may also be very rapidly reduced to near-zero if clouds roll in.

Once at the top, you will pass under a small torii gate and encounter a group of huts selling drinks and souvenirs; this being Japan, you will even find vending machines on the top of Mount Fuji. Yes, this is as anticlimactic as it sounds, but with any luck seeing the sunrise above the clouds will make up for it. You can also gaze into the long-dormant crater at the center of the mountain. Strictly speaking, this is not the highest point of the mountain; that honor goes to the meteorological station on the other side of the crater, an additional 30 minutes hike away. While some might consider it not really worth the trouble, a purist will tell you that if you do not stand at the highest point, you never really summited, so the choice is yours. A full circuit of the crater takes around an hour.

There is a separate path for descending down the mountain back to Kawaguchiko; be sure you take the right one! Do not attempt to run down the mountain; rolling down isn’t fun, it’s a long way to the nearest hospital, and you don’t want to find out how much a helicopter medevac costs in Japan.

This is the longest and toughest access route from the fifth station, with Gotemba 5th Station (Gotemba Go-gōme) located at 1440 meters, nearly 900 meters lower down than Kawaguchiko.

There are separate routes for ascent and descent, which will take 7 to 10 and 1.5 to 3 hours accordingly. The path is clearly marked with signs, so night climbing (with a flashlight) is possible. For your own safety, walking on the bulldozer path, which crosses the pedestrian path several times, is not allowed. The climb from the 5th to the 6th station is over an enormous ash field, which formed during a recent eruption in 1707. Mountain huts at the 6th, 7th and 8th stations operate during official climbing season and also provide warm food (curry rice, ramen, soba, drinks etc). Beware of rocks from 8th station and above. It is essential to bring enough water supplies or buy water at the fifth station, because there are limited places to resupply, although it may be possible to purify and drink the rainwater which is available for hand washing purposes at the mountain huts.

Advantages of this trail:

Disadvantages of this trail:

If you climbed Mt. Fuji and survived despite (thanks to?) all the apocalyptic warnings here, treat yourself to a dip in the hot springs at Hakone.

Watch a video about Mt. Fuji