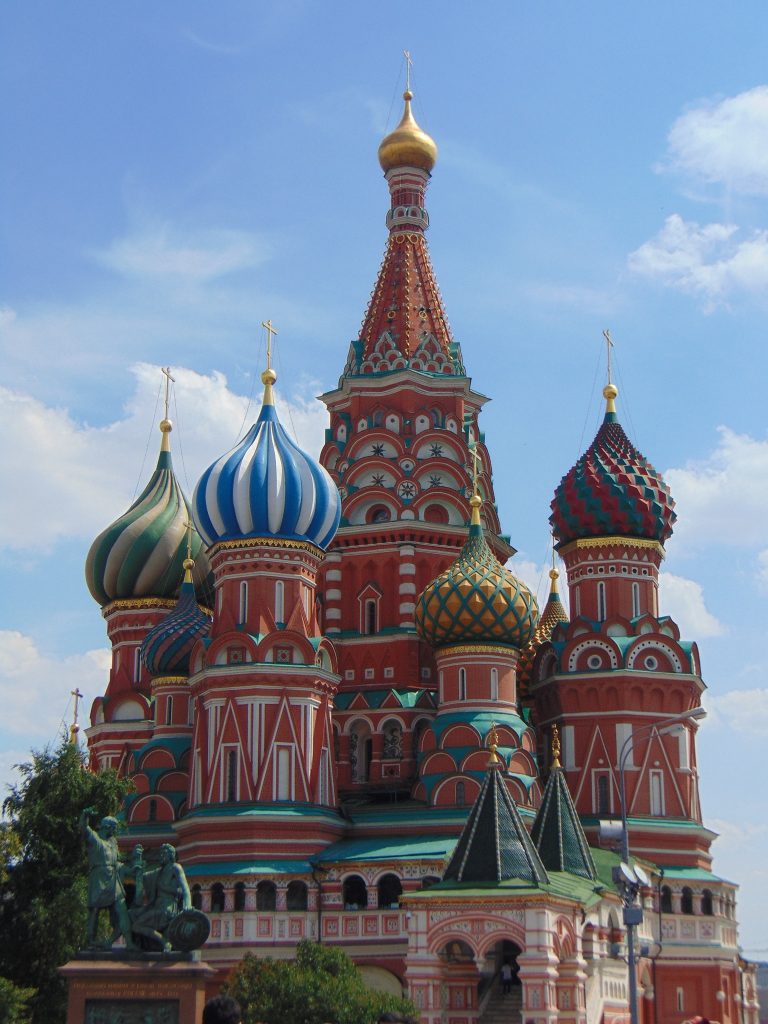 Explore Moscow which is the more than 870-year-old capital of Russia. An iconic, global city, Moscow has played a central role in the development of Russia and the world. For many, the sight of the Kremlin complex in the centre of the city is still loaded with symbolism and history. Moscow was the capital of the former Soviet Union and signs of its previous life are still very visible. Yet, there is more to Russia and its capital than just memories of the USSR. Architectural gems from the time of the Russian Empire are still dotted throughout Moscow, whilst signs of modern Tsars (or at least people with similar levels of wealth) abound. During the recent years the city underwent major renovations and now it is very modern European city with Russian style.

Moscow is the financial and political center of Russia and the countries formerly comprising the Soviet Union..

The Moskva River bends its way through the city with most of the sites of tourist interest on the northern bank of the river. The other major waterway is the Yauza River, which flows into the Moskva east of the Kremlin.

Much of Moscow’s geography is defined by the 3 ‘Ring Roads’ that circle the city at various distances from the center, roughly following the outline of the walls that used to surround Moscow. With Red Square and the Kremlin forming the very center, the innermost ring road is the Boulevard Ring (Bulvarnoye Koltso), built in the 1820s where the 16th-century walls used to be. It runs from the Christ the Saviour Cathedral in southwest central Moscow, to the mouth of the Yauza in southeast central Moscow.

The next ring road, the Garden Ring (Sadovoe Koltso), derives its name from the fact that landowners near the road in Tsarist times were obligated to maintain gardens to make the road attractive. In Soviet times, the road was widened, and there are now no gardens there.

The Third Ring Road, completed in 2004, is not much use for tourists but is a heavily used motorway which absorbs a bit of Moscow’s traffic. It roughly follows the outline of Kamer-Kollezhsky val, the customs and passport boundary of Moscow between 1742 and 1852. The outer edge of Moscow is largely defined by the Moscow Ring Road (widely known by its abbreviation: MKAD-Moskovskaya koltsevaya Automobil Naya Dorota), a motorway which is 108km long and encircles the entire city.

Moscow has a humid continental climate with freezing winters and warm summers, with rainfall evenly distributed throughout the year, measuring 707mm on average.

What to see. Best top attractions in Moscow, Russia

What to do in Moscow, Russia

Moscow remains the educational centre of Russia and the former USSR. There are 222 institutes of higher education, including 60 state universities & 90 colleges. Some of these offer a wide-spectrum of programs, but most are centered around a specific field. This is a hold-over from the days of the USSR, when Soviet-wide there were only a handful of wide-spectrum “universities” mostly with fundamental educational programs and research (mathematics and mechanics, all branches of physics, chemistry, biology, etc.) and a large number of narrow-specialization “institutes” focusing on applied science such as different fields of engineering (mostly in Moscow and Saint Petersburg). Moscow offers some of the best business/management, science, & arts schools in the world. Moscow is also a popular destination for foreign students to learn Russian.

Credit card acceptance is widespread. ATMs are plentiful, display in English and accept the major card networks such as Visa/Plus and MasterCard/Cirrus. Currency exchange offices are plentiful in the city, but be sure to count your change and note that the advertised rates sometimes don’t include an added commission or only apply to large exchanges. Be sure to break your RUB5,000 and RUB1,000 notes where you can since the smaller merchants, street vendors and even many metro clerks often refuse them.

Restaurants and cafes promising “European and Caucasus cuisine” generally cater to tourists and are usually bad; seek a restaurant that specializes in a single region instead (Georgian, Russian, Italian, French, etc.).

Many small restaurants offer lunch specials at a good price. These deals are valid from 12:00 to 15:00 and include a cup of soup or an appetizer, a small portion of the main dish of the day, bread and a non-alcoholic beverage.

Authentic ethnic food from countries of the nearby Caucasus (Azerbaijan, Georgia,

Armenia) is common in Moscow. Japanese food, including sushi, rolls, tempura, and steakhouses are very popular in Moscow. Other Asian cuisines including Vietnamese, Thai, and Chinese are becoming increasing more common.

Moscow has several café chains with great coffee. Moscow also has a good selection of tea saloons. High-quality infusion teas such as Newby, are widely available in cafes, both in packets and loose. Also most coffee shops serve invented in Moscow coffee drink called Raf.

Asking to add boiling water to the tea you ordered earlier is a practice that some cafes don’t welcome, but normally it’s acceptable.

With the exception of some high-end hotels, all hotels and hostels offer free WiFi and many have computer terminals. Almost all accept credit cards. Hotels and hostels will usually provide a visa invitation and registration for an additional fee.

Moscow enjoys a relatively low crime rate. However, Moscow is a large metropolis, so common sense should be used. Avoid dark alleys – like you would anywhere else.

Keep in mind that all the drugs are strictly prohibited. Any quantity of prohibited substances can lead to a jail.

Keep an eye out for pickpockets on metro; avoid going on dark deserted streets at night.

The police may demand to see your papers to check if you have been registered within 7 business days of your arrival into Moscow. Always remember that if you stay in a hotel then you are automatically registered and will be handed a confirmation paper at a time of check-in, so don’t worry in this case. The police are usually looking for migrants from Central Asia and unless you fit this profile, you are unlikely to be questioned.

In winter months, streets in Moscow can get very slippery. Take a pair of grippe shoes or, even better, boots (to prevent twisted ankles) and a waterproof raincoat. Take care as ice patches are often hard to spot, even when they appear to have been cleared or melted. Wearing non-grippe shoes could result in injury.

Downtown Moscow is very brightly lit, and a lot of the wide roads have underground pedestrian walkways. Those are well lit too – so you shouldn’t worry about going down inside them. But of course, like anywhere else, do use common sense, and keep an eye out for pickpockets. Use the pedestrian crossings to cross the street, as traffic can get pretty crazy often times.

Beware of Taxi scams. These are pretty common, especially close to the airports, railway stations, tourist sights, bars and clubs. Do not get into the car unless you agreed on price before. DO NOT hope for taxi meters, this can lead you into a bigger scam

Watch a video about Moscow