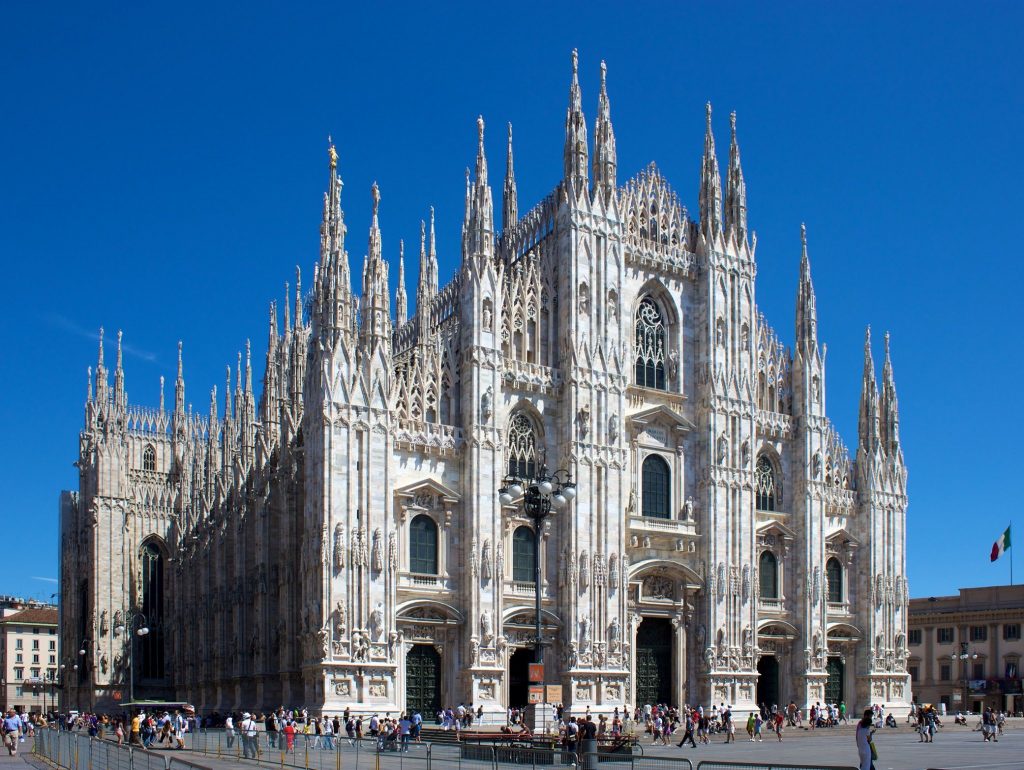 What to buy in Milan, Italy

The huge Corso Buenos Aires may not be the top street in Milan‘s fashion, but it’s the longest and most popular shopping area in the city and one of the longest in the world, and contains a huge variety of shops – from designer boutiques, trendy outlets and funky furniture stores, to second-hand bargain sales, old antique dealers and newsagents.

Milan, being a worldwide trendsetter, is a fashion shoppers’ paradise.

There is pretty much every form of shopping in this city that one can imagine: from the designer’s prestigious emporia, retail giants’ outlets, small entrepreneur’s tiny and funky boutiques, to second-hand average shops.

Armani Megastore, Via Manzoni 31, near La Scala. Giorgio Armani’s flagship store. Covering over 8,000 square feet with outlets for his high-fashion creations, the Emporio Armani and Armani Jeans lines, plus the new Armani Casa selection of home furnishings as well as flower, book, and art shops; a high-tech Sony electronics boutique/play center in the basement; and an Emporio Café and branch of New York’s Nobu sushi bar.

Gucci Flagship, Via Montenapoleone, no. 5-7. This is Gucci’s flagship store in the city, opened in 2002, which has haute couture (high fashion) clothing and accessories. There are also some other Gucci stores in Milan, including the Galleria Vittorio Emanuele, and even in Milan’s Malpensa airport.

Prada, Galleria Vittorio Emanuele, no. 63. One of Prada’s several boutiques in the city, the one in the Galleria is the closest to the Duomo and the central square. It sells a variety of high-fashion items, such as shoes, perfume, handbags, accessories etc, both classical and modern, in a chandelier-filled, multi-floored shop (it is bigger than it looks from the outside).

Krizia, Via Sant’ Andrea, no. 15. Popular ever since the 1960s, Krizia is a trendy boutique with funky clothes and swanky designs. Found in Sant’ Andrea street, right in the heart of the top shopping district of the city.

Corso Como 10. Found in the early 1990s, this sort of “multi-functional” shopping complex is found in the same place as its name. Considered a lifestyle emporium and 13,000 square feet big, it contains some fashion shops, design, photography and art gallery, luxury goods, a bookshop, accessories, a cafe and a restaurant. Situated in the Garibaldi district, near the Centro Direzionale (Milan’s business district), it has a courtyard, and a European/Oriental inspired interior design.

D Magazine, Via Manzoni 44. Located in Milan on one of the world’s most exclusive shopping streets, the D Magazine is an outlet where you can find a lot of designer clothes. Names such as Giorgio Armani, Valentino, Prada or Fendi can be found here.

Basement, Via Senato, 15. This small hidden shopping outlet called Basement cannot be seen from the street above. To reach it, you have to go to the Via Senato no. 15 parking lot, go down a staircase, go to your right, and then you’ll see a purple sign, which shows that you’ve arrived. It contains a lot of designer clothes, including that from Moschino, Prada and Yves Saint Laurent, to D&G and La Perla with huge discounts. Unfortunately this shop is now closed.

Serravalle Scrivia, Via della Moda, no. 1. All days: 10:00-20:00. One of the biggest shopping outlets in Europe, containing 180 stores, despite being 1 hours’ drive from the city and in the Piedmont region, it is definitely worth a visit if you’re a shopping fan. And it has a very pleasant feel because it is more like a mini-town than an actual outlet, with Italian-style piazzas and pretty alleyways, surrounded by rolling hills and a lovely local countryside, and absent of cars. With over 20 million visitors having come ever since its opening in 2000, you can find luxurious designer names, such as Dolce & Gabbana, Etro, Diesel, Roberto Cavalli, Ferragamo, Timberland, Tommy Hilfiger, Prada, Geox, Swatch, Bulgari, Swarovski, and several more (at bargain prices)! Then, if you want to have a meal, you can stop for some fast-foods at Burger King or the Italian Spizzico, have an ice-cream or sip at a drink in a café. Despite the slightly long trip, it makes a truly great day out, and is heaven for any fashionista or passionate shopper!

For people wanting to spend a bit less while still buying beautiful pieces, other areas are better. One of these is Vercelli Avenue, another one is Buenos Aires, reputed as being the longest shopping street of Europe. Corso Buenos Aires connects Porta Venezia to Piazzale Loreto, and is even more commercial: here you can find Calzedonia, Alex Fashion, Luisa Spagnoli, Furla, Brian & Barry and Nara Camice.

The Brera district is also not to be missed for trendy and young, yet stylish, boutiques. The Brera district is great for other things, such as browsing through ancient rare art stores and galleries, sipping a hot drink at a refined-air cafe, attending a funky disco, or looking for exotic furniture. However, today, there are a lot of young designers who have up-and coming boutiques, which are slightly less expensive than their Montenapoleone counterparts, but are quite fashionable and of high quality. The Brera district is great because it combines chic, old-air shops, with zeitgeist, modernist and youthful ones. Jewelry stores include Papic oro e argento or Alcozer & J. Bijoux, fashion shops include Accessori or Laura Ashley, and furniture stores include Zohar or Lucitalia.

Let us not forget, the Piazza del Duomo, Via Dante, Piazza San Babila, Galleria Victor Emanuel and the Corso Giacomo Matteoti, which are excellent shopping places. In the Galleria, you get brand fashion stores, two bookstores (Rizzoli and Libreria Bocca) and a sliverware store called Bernasconi plus a Gucci cafe (and many, many more!). In the Corso Giacomo, you can find Abercrombie & Fitch, in Piazza del Duomo you have Grimoldi, Ruggeri, Donna and La Rinascente department store, in Piazza San Babila you can find Upim, Eddy Monetti, Guess and Valextra, and there are loads of shops in the Via Dante, so there are really heaps of shopping opportunities in this area.

For hipsters, there’s the elongated Porta Ticinese area, especially on Saturday, when the flea market Fiera di Senigallia takes place near the Darsena (2008: currently that area is closed and Fiera di Senigallia has been moved to a place near Porta Genova MM2 subway and train station). This is a great place to wander and browse, and save money if you’ve somehow survived Milan’s high end boutiques. Sort through new and second-hand clothes, old furniture, fake art nouveau lamps, perfumed candles and every kind of essence, books, comics, records, videos and DVDs. In the Corso Ticense, several shops, such as Diesel, RVM Orologi, Dress, Energie, Colors & Beauty, Tintoria La Boutique, Blu Max, Le Jean Marie, Brazilian, Ethic, L’Uomo outlet, Les Tropezziennes, Atelier cucine e …, Panca’s Show Room, or Cinius (and loads more) are present. There are also several banks and post offices, such as the Banca Popolare and Poste Italiane, and a CTS Viaggi travel agency. Thus, with so many shops, you can keep your shopping bags full, and browse even further.

The other market in Milan is the Mercatone del Naviglio Grande. This takes place along the Alzaia Naviglio Grande on the last Sunday of each month. Dedicated to antiques, the market has over 400 exhibitors, so you’re certain to find something that catches your eye.

If outlet shopping is your thing, the shopping outlet in Serravalle Scrivia (a town roughly an hour’s drive from Milan is a good bet. Tour company-operated buses, including one that leaves from near the Castle, will take you there and back. Reputed to be the first designer outlet in Italy and the biggest in Europe. Over 180 stores stock clothing, footwear and accessories, with 3,000 parking lots, a children’s playground, bars and restaurants. In central Milan, you also get some good outlets too, such as Vestistock, D Magazine, or 10 Corso Como (and several more) which all have designer clothes and other interesting features. Corso Buenos Aires is the best street in the city for outlet shopping, since it contains many of the big shopping centers or department stores.