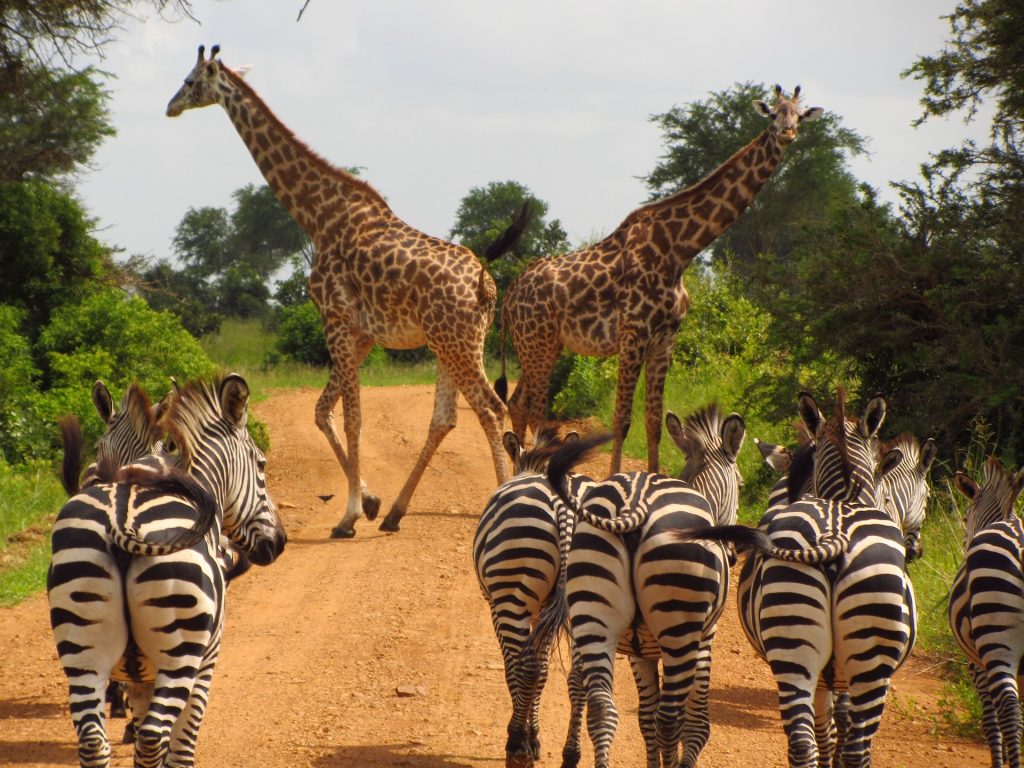 Explore Mikumi National Park  in Southern-Central Tanzania. The park has large open plains of grassland, similar to the Serengeti.

Many of the same sort of animals are seen as in Ruaha. The most unusual phenomenon is the “midget” elephants. These look like the normal African elephant but are of a diminished size and with smaller and thinner tusks. Local lore says that this is a survival adaptation to protect the herd from ivory hunters as the lesser tusk makes the animal less desirable to poachers.

Mikumi National Park is about 250km west of Dar es Salaam and is the closest national park to the city. Driving there takes about 4 hours due to the poor conditions of the road.

Travel agents and tour companies can arrange transportation to Mikumi and through the park. You must ensure the vehicle used is a reliable 4×4, e.g. Land Cruiser and Range Rover. No Rav4 and CRVs. Although it’s possible to navigate most of the main roads with a sedan, you will not get the best sightseeing experience.

Park Fees A visitor’s permit costs $20US per person and is valid for 24-hours from time of purchase. Be advised that non-residents are expected to pay the park entry fee by credit card in US dollars not Tanzanian Shillings. Visitors must enter before 4pm and exit before 7pm. Those staying in one of the park’s lodging facilities must be back at camp by 7pm.

If you have your own 4×4 vehicle, just ask your lodge for a map of the trails. There aren’t many trails in the park and most secondary roads are closed during the rainy season. The hippo pool is always a good spot to see animals. If you spend two days driving in the park you should expect to see lions, elephants, giraffes, buffaloes, zebras, hippos, boars, wildebeests, impalas, and copious amounts of birds. When entering the park, ask the guards at the gate which areas are best for viewing that day and if they’ve seen any lions around. Also, look for circling vultures, which indicates a dead animal. As mentioned, lions are present, but you may not see them, as they do not stand in view. When they hunt other animals, they tend to move away from those that are ill or weak when doing so. They hunt with their pride from their den. They may go 4 days to two weeks between hunts. They can be omnivores in some circumstances. Only an incapacitated/deranged lion will go after humans, normally they will run from them. Those are then tracked and killed as they are dangerous.

If you plan on hiring a car in Tanzania and driving yourself to Mikumi be prepared in the event of a breakdown or accident.

DO NOT enter a national park without a FULL tank of petrol. You should also have an emergency jerry can with at least 20 liters of fuel and a full-sized spare tire in case you damage your tire in a remote area and need to drive through difficult terrain.

Although it’s very unlikely you will have any difficulties if you must change a flat tire in the park, be aware that some wild animals are ambush hunters. Don’t stray too far from the vehicle and keep the children inside at all times.

Tsetse flies: They are very abundant in Mikumi. They are somewhat similar to houseflies but sting. In more densely forested parts of the park, keep your windows closed. If one does get in, kill it immediately as they are quick to bite. Tsetse fly bites can potentially be harmful to humans as they are carriers of sleeping sickness.

Watch a video about Mikumi