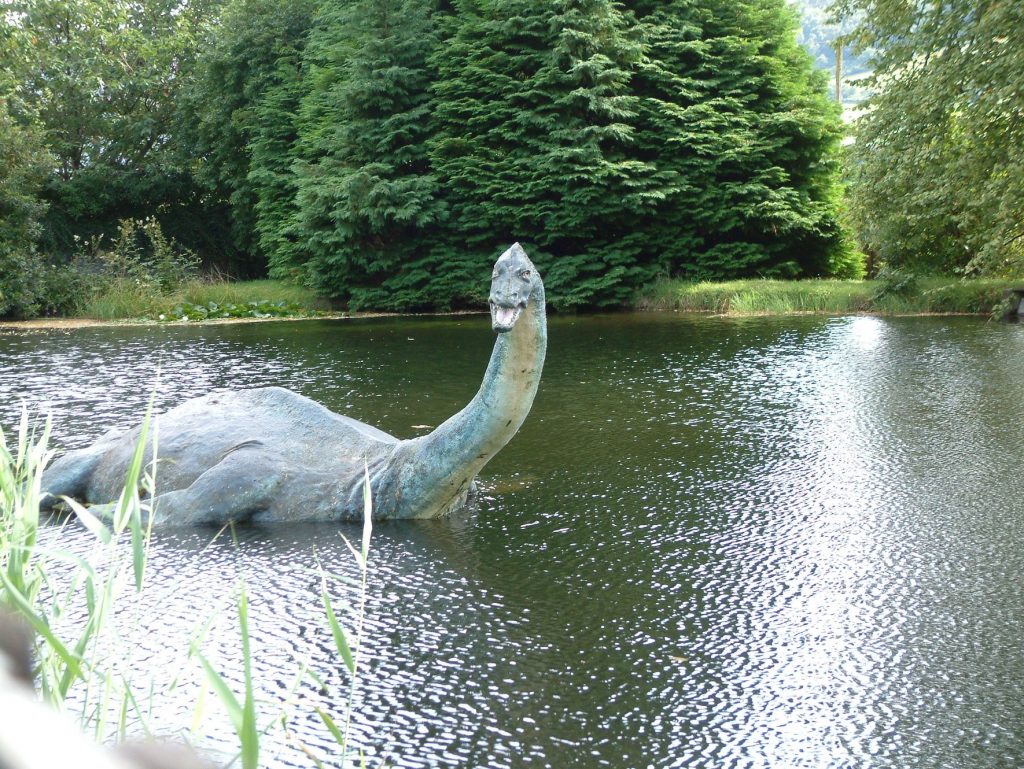 Explore Loch Ness lake, Scotland‘s (if not the world’s) most famous lake (or ‘loch’ in Scotland). It runs for 37 km along the natural geological cleft that stretches from Fort William in the west of the Scottish Highlands, to Inverness in the north.

About a mile wide at most places it is the purported home of the Loch Ness monster, a possibly mythical creature, which dwells in the Loch and is occasionally spotted by locals and passers-by. The sightings claimed lend credence to the remote possibility of a group of survivors of the long-extinct plesiosaurs (which lived up to around 65 million years ago).

The Scottish Highlands consist of a plateau dissected by glacier scoured glens (valleys), many of them containing lochs (lakes). Loch Ness, the largest body of water in UK.

A series of lock gates in the canal helps to raise or lower ships.

Loch Ness is 226 meters deep at its deepest point and is the second largest Scottish loch by surface area at 56.4 sq km.

Loch Ness offers stunning views of the loch. Rugged hills climb steeply from the loch’s dark waters. There are many parking places along the road where vehicles can be parked and the beauty of the surroundings savored. There are some less used roads on the eastern side of the loch. A complete circuit of the loch covers about 110 km. Driving on these roads can be challenging if you are not used to driving on the left. It may be better to take a tour along the loch or see it by boat.

Drumnadrochit – It is a popular stop for tourists with The Highlands and Islands Tourism Award winning, 5 The Loch Ness Centre & Exhibition and the other the 3 Star Nessieland Castle Monster Centre.

Using a highly effective mix of lasers, digital projection and special effects the Loch Ness Exhibition charts the history of the monster by exploring Scotland‘s geological past, its folklore and the various research projects carried out on the loch. It also reveals the discoveries of some of that research including the environmental fingerprints left in the loch’s layers by both nature and mankind.

The ruins of the 5 Star, Urquhart Castle Castle Urquhart are two miles away at Strone point. A 831 road leaves from here for some beautiful areas, ultimately reaching Inverness.

Invermoriston – The valley of the River Moriston that empties itself into the loch here, over a series of rapids, is one of the most beautiful of all the highland glens. The road is lined with mature deciduous trees on both sides creating an avenue of natural beauty. A887 road takes off in the direction of the Isle of Skye.

Fort Augustus – It is the largest of the loch side villages. There is a tourist office near the car park. The Hannoverians built a series of forts to secure the Great Glen: Fort George near Inverness, Fort Augustus in the heart of the Great Glen, and Fort William at the southern end.

Glenmoriston – The A887 takes off from Invermoriston and heads west for Glenmoristion along the River Moriston. The road links to A87 further ahead. The sheer beauty of the place is recommended by all for a detour from the main track. One can travel even 20-25 miles inside but say around 10 miles or so could show a visitor what a place it is. About 5 miles inside is Dundreggan Loch (Dundreggan means ‘the hill of the dragon’). It is an artificial lake created for hydro-electricity generation. Another 2 miles in is the Redburn Café, a great place to eat, with such ice cream concoctions as the Loch Ness Monster.

Scotland is a sparsely populated country and only a small proportion of that population lives in the Scottish Highlands. Therefore, it is mostly barren territory. Villages in the highlands are small neat places with a lot of fighting and history behind them. It has been a battle against nature and also amongst human beings for survival and supremacy. Some interesting facts: Number of tourists visiting Scotland annually surpass the population of Scotland and the number of Scots living outside Scotland is many times more than the population of Scotland.

English is the official language of Scotland and is spoken by more or less everyone. Gaelic is spoken by about 60,000, and many Gaelic words are commonly used. The Scots, like most Britons, generally flourish when they live abroad but at home have rather poor foreign language skills, although those in tourism-related industries generally have better language skills. French, German and Spanish are the most commonly known foreign languages.

Ready for the Loch Ness cruise

Public transport is not the best way to see what this area has to offer. The problem is the infrequency of the buses, which are limited to the main roads. Instead, it is recommended that you hire a car, or join a tour group. Cruises on the loch leave from Dochfour, or Drumnadrochit. The best way to get to these is to use the cruise company buses (sometimes complimentary).

What to see. Best top attractions in Loch Ness, Scotland

Loch Ness Centre & Exhibition the Loch Ness Centre & Exhibition VisitScotland graded 5 Star Visitor Attraction. The exhibition was opened by explorer Sir Ranulph Fiennes. It takes visitors through seven themed areas on a journey from the dawn of time to the third millennium. An insight into the loch’s wider significance. Designed and narrated by Loch Ness Project leader, the naturalist Adrian Shine (Loch Ness Project). Whilst keeping the mystery centre stage, it is placed firmly into the context of a loch with rare & unusual properties: some still motivate expeditions while others can “create” monsters. Here are the results of that exploration, using the very latest multi-media system, original research equipment and authentic underwater films.

Loch Ness Information. This website tackles the Loch Ness mystery in a down to earth manner and contains a lot of resources for potential visitors.

Nessie or the Loch Ness Monster – Be alert! Keep your eyes wide open, look closely, and best of luck!

Urquhart Castle. The most famous site in the area. The castle is in ruins but an impressive ruin with walls, four turrets and the keep. The beauty of the place coupled with its history makes it so attractive. The position of the castle at Strone Point is dramatic and commands a wide view of Loch Ness. There had been a fortress at that point from ancient times and the castle was associated with big names of Scottish history such as Saint Columba (6th century) and Robert the Bruce (12-13th century). The end came with a bang in the final years of the 17th century when it was packed with explosives and blown up to render it useless to the Jacobites. Those visiting the castle must not miss the dramatic audiovisual presentation at the centre there, certainly one of the best anywhere in the world. It is in English but depending on the composition of the tourists sub-titles are added in some other languages. Open all year, except on 25th and 26th December. Opens: 9.30 am. Last tickets sold: 3.45 pm (1st October to 31st March), 5.45 pm (1st April to 30th September).

Lockgates in the Caledonian Canal, near For Augustus

The Caledonian Canal – The staircase of locks can be seen from the road itself as it crosses the canal at Fort Augustus and also crosses the canal near Inverness. Each lock can raise or lower a ship 8 feet. Started in 1803 and completed in 1822 this enormous enterprise was entirely funded by the government of the day. (Caledonia was the northern part of Britain beyond Roman control, roughly corresponding to present-day Scotland.)

Loch Ness by Jacobite. Loch Ness by Jacobite is the largest five-star cruise operators on Loch Ness. Offering various cruise and tour options across their fleet. Absorb the history, mystery and magic of Loch Ness as you sail through the deepest waters. Be sure to look out for Nessie on your travels with on board sonar equipment. Should the weather let you down you can keep dry inside the heated saloons. Enjoy a hot drink or beverage from the fully stocked bar on board and indulge in some light refreshments of Scotland’s finest snacks. Open all year, except 25th and 26th of December. Summer sailing start from 0900hrs – 1600hrs across various departure points. Winter sailings start from 1100hrs-1500hrs.

What to do in Loch Ness, Scotland.

It is a place to see, eat and drink but those who desire to buy souvenirs can do so at small outlets. The new Visitor Centre at Urquhart Castle has good stocks of items for tourists. However, a place such as Fort Willaim offers a wider choice of Scottish dresses, woolen ware, mementoes and of course Scotch Whisky. Most of the tour operators bringing in tourists from Edinburgh provide a lunch break at Fort William, long enough for more than just a look at the variety.

Go hiking – Loch Ness is a very popular area for walkers and the Great Glen Way traverses the length of the lake.

The area being one of major tourist attraction, there is no dearth of restaurants. Breakfast is a great attraction and there is so much variety ranging from Big Scottish Breakfast to Whole Day Breakfast. A breakfast is good enough to keep one going for several hours. Food is basically meat-based. Fish is also available. Those who want to avoid both have to look for vegetable sandwiches, croissants and salads.

It is Scotland and so one need not worry about availability of drinks. Selection may pose a problem, so wide is the range available. One place boasts that it has 1000 brands of single malt Scotch whisky.

Be prepared for the unexpected cold and the rains.

Most of the coach tours take tourists around the Scottish Highlands along with a visit to Loch Ness. Tourists should check what else they want to see before deciding upon a particular tour. Much of the information is available on the Internet sites. Those who want to travel a little farther can plan to visit one or more of the many islands.

Great Glen Way is a 73 mile long footpath from Fort William to Inverness passing along the Loch Ness. It was officially opened in 2002. It is a great venture for those who enjoy walking.

Watch a video about Loch Ness