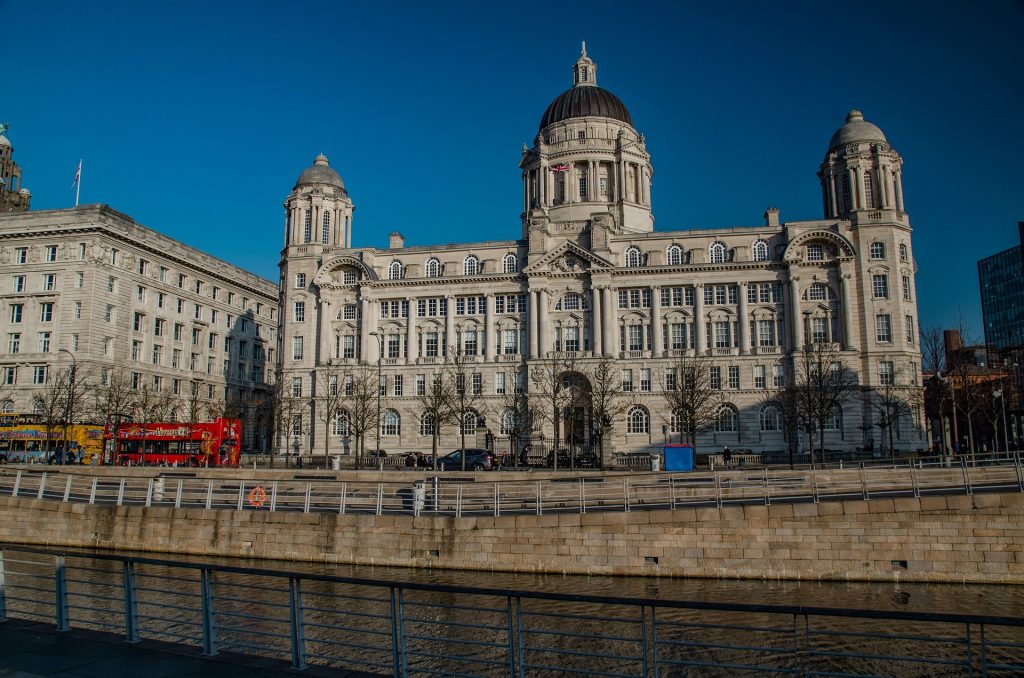 Liverpool is a city and metropolitan borough in North West England. Its metropolitan area is the fifth-largest in the UK.

Explore Liverpool which is on the eastern side of the Mersey Estuary, and historically lay within the ancient hundreds of West Derby in the south west of the county of Lancashire. It became a borough in 1207 and a city in 1880. In 1889, it became a county borough independent of Lancashire. Its growth as a major port was paralleled by the expansion of the city throughout the Industrial Revolution. Along with handling general cargo, freight, raw materials such as coal and cotton, the city merchants were involved in the Atlantic slave trade. In the 19th century, it was a major port of departure for Irish and English emigrants to North America. Liverpool was the port of registry of the ocean liner RMS Titanic, the RMS Lusitania, RMS Queen Mary and RMS Olympic.

The popularity of the Beatles and other music groups contributes to Liverpool’s status as a tourist destination. Liverpool is also the home of two Premier league football clubs, Liverpool and Everton.

The Grand National horse race takes place annually at Aintree Racecourse on the outskirts of the city.

The city celebrated its 800th anniversary in 2007. In 2008, it was nominated as the annual European Capital of Culture. Several areas of the city center were granted World Heritage Site status by UNESCO in 2004. The Liverpool Maritime Mercantile City includes the Pier Head, Albert Dock, and William Brown Street. Liverpool’s status as a port city has attracted a diverse population, which, historically, was drawn from a wide range of peoples, cultures, and religions, particularly from Ireland and Wales. The city is also home to the oldest Black African community in the country and the oldest Chinese community in Europe.

Liverpool has been a center of industrial and later innovation. Railways, transatlantic steamships, municipal trams, electric trains were all pioneered in Liverpool as modes of mass transit. In 1829 and 1836 the first railway tunnels in the world were constructed under Liverpool. From 1950 to 1951, the world’s first scheduled passenger helicopter service ran between Liverpool and Cardiff.

The first School for the Blind, Mechanics’ Institute, High School for Girls, council house and Juvenile Court were all founded in Liverpool.

The world’s first integrated sewer system was constructed in Liverpool.

In finance, Liverpool founded the UK’s first Underwriters’ Association and the first Institute of Accountants. The Western world’s first financial derivatives (cotton futures) were traded on the Liverpool Cotton Exchange in the late 1700s.

In 1864, Peter Ellis built the world’s first iron-framed, curtain-walled office building, Oriel Chambers, the prototype of the skyscraper. The UK’s first purpose-built department store was Compton House, completed in 1867. It was the largest store in the world at the time.

Between 1862 and 1867, Liverpool held an annual Grand Olympic Festival. These games were the first to be wholly amateur in nature and international in outlook. The program of the first modern Olympiad in Athens in 1896 was almost identical to that of the Liverpool Olympics. In 1865 Hulley co-founded the National Olympian Association in Liverpool, a forerunner of the British Olympic Association. Its articles of foundation provided the framework for the International Olympic Charter.

In 1999, Liverpool was the first city outside the capital to be awarded blue plaques by English Heritage in recognition of the “significant contribution made by its sons and daughters in all walks of life.

The majority of buildings in the city date from the late18th century onwards, the period during which the city grew into one of the foremost powers in the British Empire. There are over 2,500 listed buildings in Liverpool, of which 27 are Grade I listed and 85 are Grade II listed. The city also has a greater number of public sculptures than any other location in the United Kingdom aside from Westminster and more Georgian houses than the city of Bath. This richness of architecture has subsequently seen Liverpool described by English Heritage, as England’s finest Victorian city. The value of Liverpool’s architecture and design was recognized in 2004, when several areas throughout the city were declared a UNESCO World Heritage Site. The Liverpool Maritime Mercantile City was added in recognition of the city’s role in the development of international trade and docking technology.

As a major British port, the docks in Liverpool have historically been central to the city’s development. Several major docking firsts have occurred in the city including the construction of the world’s first enclosed wet dock (the Old Dock) in 1715 and the first ever hydraulic lifting cranes. The best-known dock in Liverpool is the Albert Dock, which was constructed in 1846 and today comprises the largest single collection of Grade I listed buildings anywhere in Britain. Built under the guidance of Jesse Hartley, it was considered to be one of the most advanced docks anywhere in the world upon completion and is often attributed with helping the city to become one of the most important ports in the world. The Albert Dock houses restaurants, bars, shops, two hotels as well as the Merseyside Maritime Museum, International Slavery Museum, Tate Liverpool and The Beatles Story. North of the city center is Stanley Dock, home to the Stanley Dock Tobacco Warehouse, which was at the time of its construction in 1901, the world’s largest building in terms of area and today stands as the world’s largest brick-work building.

One of the most famous locations in Liverpool is the Pier Head, renowned for the trio of buildings – the Royal Liver Building, the Cunard Building and the Port of Liverpool Building – which sit upon it. Collectively referred to as the Three Graces, these buildings stand as a testament to the great wealth in the city during the late 19th and early 20th century.

Liverpool’s historic position as one of the most important trading ports in the world has meant that over time many grand buildings have been constructed in the city as headquarters for shipping firms, insurance companies, banks and other large firms. The great wealth this brought, then allowed for the development of grand civic buildings, which were designed to allow the local administrators to ‘run the city with pride’.

The commercial district is centered on the Castle Street, Dale Street and Old Hall Street areas of the city, with many of the area’s roads still following their medieval layout. Having developed over a period of three centuries the area is regarded as one of the most important architectural locations in the city, as recognized by its inclusion in Liverpool’s World Heritage site.

The oldest building in the area is the Grade I listed Liverpool Town Hall, which is located at the top of Castle Street and dates from 1754. Often regarded as the city’s finest piece of Georgian architecture, the building is known as one of the most extravagantly decorated civic buildings anywhere in Britain. Also on Castle Street is the Grade I listed Bank of England Building, constructed between 1845 and 1848, as one of only three provincial branches of the national bank. Amongst the other buildings in the area are the Tower Buildings, Albion House, the Municipal Buildings and Oriel Chambers, which is considered to be one of the earliest Modernist style buildings ever built.

The area around William Brown Street is referred to as the city’s ‘Cultural Quarter’, owing to the presence of numerous civic buildings. The area is dominated by neo-classical architecture, of which the most prominent, St George’s Hall is widely regarded as the best example of a neo-classical building anywhere in Europe.

While the majority of Liverpool’s architecture dates from the mid-18th century onwards, there are several buildings that pre-date this time. One of the oldest surviving buildings is Speke Hall, a Tudor manor house located in the south of the city, which was completed in 1598. The building is one of the few remaining timber framed Tudor houses left in the north of England and is particularly noted for its Victorian interior, which was added in the mid-19th century. The oldest building within the city center is the Grade I listed Bluecoat Chambers, which was built between 1717 and 1718. Constructed in British Queen Anne style it was originally the home of the Bluecoat School. Since 1908 it has acted as a center for arts in Liverpool.

Liverpool is noted for having two Cathedrals, each of which imposes over the landscape around it. The Anglican Cathedral, which was constructed between 1904 and 1978, is the largest Cathedral in Britain and the fifth largest in the world. Designed and built in Gothic style, it is regarded as one of the greatest buildings to have been constructed during the 20th century. The Roman Catholic Metropolitan Cathedral was constructed between 1962 and 1967 and is known as one of the first Cathedrals to break the traditional longitudinal design.

In recent years, many parts of Liverpool’s city center have undergone significant redevelopment and regeneration after years of decline.

There are many other notable buildings in Liverpool, including the art deco former terminal building of Speke Airport, the University of Liverpool‘s Victoria Building, and the Adelphi Hotel, which was in that past considered to be one of the finest hotels anywhere in the world.

The English Heritage National Register of Historic Parks describes Merseyside’s Victorian Parks as collectively the “most important in the country”. The city of Liverpool has ten listed parks and cemeteries, including two Grade I and five Grade II, more than any other English city apart from London.

As with other large cities, Liverpool is an important cultural center within the United Kingdom, incorporating music, performing arts, museums and art galleries, literature and nightlife amongst others. In 2008, the cultural heritage of the city was celebrated with the city holding the title of European Capital of Culture, during which time a wide range of cultural celebrations took place in the city.

Liverpool has a thriving and varied nightlife, with the majority of the city’s late night bars, pubs, nightclubs, live music venues and comedy clubs being located in a number of distinct districts. A 2011 TripAdvisor poll voted Liverpool as having the best nightlife of any UK city, ahead of Manchester, Leeds and even London. Concert Square, St. Peter’s Square and the adjoining Seel, Duke and Hardman Streets are home to some of Liverpool’s largest and most famed. Another popular nightlife destination in the city center is Mathew Street and the Gay Quarter. The Albert Dock and Lark Lane in Aigburth also contain an abundance of bars and late night venues.

Watch a video about Liverpool