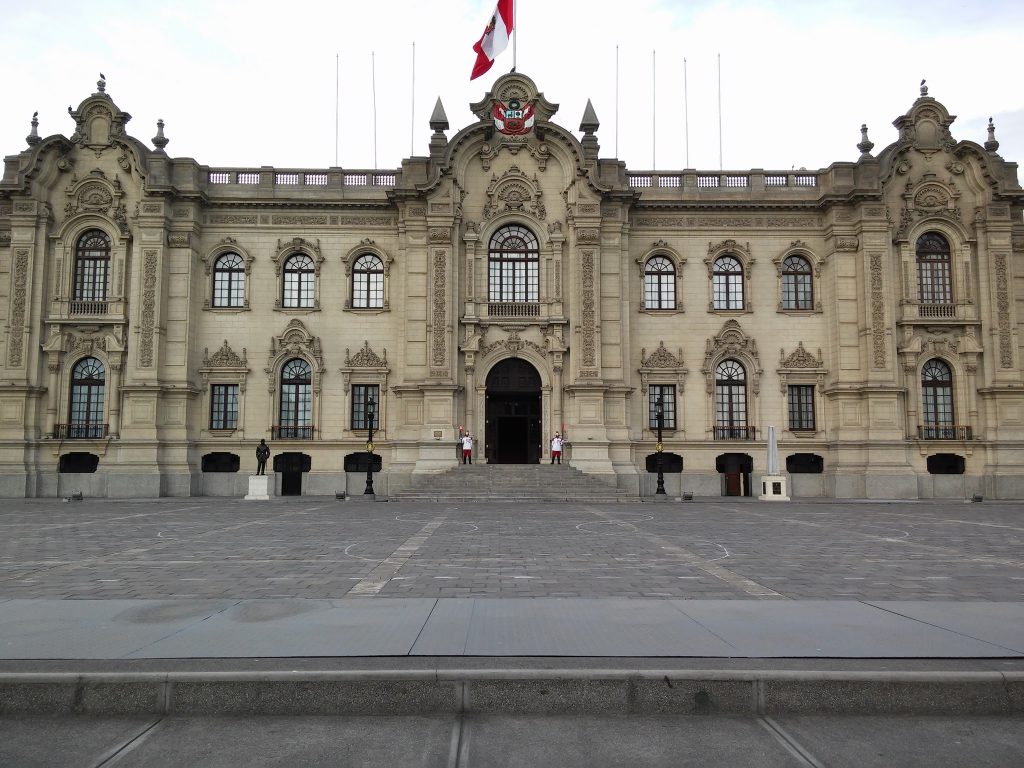 Lima is the capital of Peru and its largest city. Founded in 1535 by the Spanish conquistador Francisco Pizarro, the modern city is a curious mix of the modern mega city with some ‘islands of modernity’, large but orderly slum areas and colonial architecture in the city center. Explore Lima which was the seat of the Spanish rule during 300 years, and as such it has wonderful churches, cloisters and monasteries that are worth a visit.

Lima is also the best place to try the wonderful Peruvian cuisine, which has a huge variety of ingredients from coast, mountain and Amazon regions. The cold sea current in front of Peru’s large coast makes the sea very rich in fish and seafood, which have a great taste due to the special plankton they eat. Fish and seafood restaurants are therefore worth the time, and not expensive.

Lima is built upon a valley surrounded by an extremely arid desert. In the summer, the weather is usually beautiful, very warm and sunny, sometimes with rains around January. In the winter, the city is overcast and rainy for days at a time. The rain in the wintertime doesn’t fall hard, but it gets everything wet. Temperature also falls to around 7-12 C⁰, which seems chillier when combined with the general dampness.

Metropolitan Lima is a metropolis of almost 8.5 million people. Many of these people have migrated from the Andes mountains fleeing the internal conflict beginning in the 1980’s to find work and refuge in Lima, some, without success. For this reason, there is widespread poverty in the city center and in the peripheral areas. If you fly into Lima, the first thing you see upon leaving the airport is mainly working-class, lower-middle class, neighborhoods between the airport and Lima’s historic center.

Lima’s pre-Hispanic and colonial architecture is beautiful and the city has several museums (such as Museo Larco) that tell the story of a country with a long history that produced a large number of coastal and Andean civilizations (such as the Moche, Chavin, and the Incas) and many local cultures. There are several archeological sites both within and around the city (locally known as huaca).

Car rental is available at the airport via Avis, Budget, Dollar, Hertz, and National, but unless you have experience driving in extremely challenging environments you should avoid driving yourself in Lima.

As anywhere, your best bet is usually to simply draw money from an ATM. There are banks dotted all over Lima and some of them have guarded ATMs. Chances are your bank will charge you a fortune every time you withdraw money so it is better value to get as much as possible when making a withdrawal.

Markets Av. La Marina in San Miguel on the way to the airport. An idea might be to stop there for last-minute shopping before leaving the country. These goods are similar to those of Av. Petit Thouars, but as the neighborhood is considerably less upscale and fewer tourists come here, the prices are a little lower.

Gamarra Jr. Gamarra in La Victoria is a gigantic textile market, possibly the biggest in South America. Taking up 24 blocks, Gamarra has more than 20.000 textile shops and gets more than a 100.000 visitors a day. You can find any piece of clothing you can imagine and you can get your own design printed at one of the manufacturers. The prices are considerably cheaper than in the Miraflores district but are usually of inferior quality. As a tourist, they might charge you more so be prepared to haggle. When you’re shopping in Gamarra, watch out for pickpockets. It is better to go with a Peruvian or with a few other tourists since the neighborhood can be dodgy and there could be pickpockets. The easiest way to get there from Miraflores is to take Benavides Street up to Ovalo Higuereta. There you can take the Metro (not Metropolitano) and get off at Gamarra station.

Larcomar Malecon de la Reserva N° 610. Miraflores. You can find Larcomar at the end of Larco Street in the Miraflores district, right on the cliffs. This shopping center is one of the fanciest in Lima and has all kinds of national and international brand clothing, like Adidas, Caterpillar, Desigual, Converse, Esprit, etc. It also has many restaurants and several bars and clubs.

If you are interested in purchasing Peruvian folk musical instruments, there are a number of stores selling charangos, quenas, antaras, etc. on Calle Cantuarias right near Astrid y Gastón. If you have the time, a number of these stores can help you find a teacher to learn how to play your purchase.

Gastronomy has always been, since the days of the Spanish vice royalty, an essential aspect of life in Lima. During the last few years, however, the city’s dining reputation has experienced a huge leap in the eyes of the world due to the fact that experts gathered in the Fourth International Summit of Gastronomy Madrid Fusión 2006 and formally declared Lima to be the “Gastronomy Capital of the Americas”. The offerings in Lima are nowadays most varied and cover a wide range of types and cuisines, both regional and international.

Despite the wide range of choice in Lima’s many restaurants, ceviche is surely number one on the list of dishes you must get to know, not only because it happens to be the “Peruvian national dish”, but because of its unparalleled delicious taste. With the increasing interest in the Peruvian cuisine, ceviche is quickly making its way onto tables all over the world. But if you want to enjoy the real thing, don’t miss it during your stay here in ceviche’s Mecca. There is at least one cevichería in every neighborhood, so it won’t be hard to find one. Moreover, most criollo restaurants include ceviche on their menus; indeed, many restaurants do, even the more upscale nouveau-cuisine.

Warning when to eat ceviche

The locals make it a rule not to eat ceviche late in the day since all ceviche is made from that morning’s fresh catch of Corvina (Chilean Sea Bass), which is why you will not easily find a cevicheria open after 5PM.

A second must goes to Asian cuisine, both Chinese and Japanese, which predictably, have a strong Peruvian influence. Chifas -that is, Chinese restaurants-, which can be counted by the hundreds if not thousands, are usually down-to-earth neighborhood eateries, offering a fare rich in seafood and chicken. Japanese restaurants, on the contrary, are less widespread, and more upscale and expensive. Their forte is, of course, a year-round supply of the freshest and most variegated seafood.

Peruvian food tends to be spicy and heavy. Try it with method and ask if any dish is picante (spicy), and if you are not fond of that, avoid it since it may be really picante. A full meal may be really heavy and cause problems even if it’s perfectly nice and well prepared with fresh ingredients.

There is a heavy presence of Western fast-food chains such as KFC, Burger King, Pizza Hut, Domino’s Pizza, McDonald’s, Subway and Starbucks Coffee all over the city if you’d rather not try anything new to you. Places such as Chili’s and Friday’s are scarce, but can be easily found around Miraflores. Also, you shouldn’t miss Peruvian-style hamburgers at Bembos or traditional Peruvian sandwiches in Pasquale if you want to give your everyday fast-food a local twist.

Pisco Sour is the national drink of Peru, made with Pisco, a brandy made of grapes. It is highly recommended that all adult visitors to Peru try this drink at least once before exiting the country. Visitors might be amused to learn that a controversy exists between Peru and its neighbor Chile over whose country really created the Pisco Sour, although the Chilean and Peruvian recipes are somewhat different. Variations include Maracuya Sour, Coca Sour and Chicha Sour and are offered in several bars around town. Just be careful with it; the fresh and sweet flavor makes easy to drink too much, and you can get drunk so easily.

Inca Kola is the most popular soft drink in Peru, one of few sodas that Coca Cola couldn’t defeat (until they bought the company). It’s a yellow-fruit flavored drink that tastes like cream soda.

Jugos You can find great fresh fruit drinks all over Lima. Surtidos, containing several different fruits are quite tasty.

Coffee. Several new coffee shops and artisanal roasters have opened around the city, with the largest concentration in the Miraflores, Barranco, and San Isidro districts.

Miraflores, Barranco and San Isidro are some of the nicest and safest areas in the city. Although they sometimes come a bit pricier than the old city center and other parts, some budget accommodation options do exist.

The surrounding residential towns of Lima in the foothills of the mountains offer spectacular views and are ideal day-trips from central Lima.

Arequipa— An attractive city in the south.

Huancayo can be reached by taking a scenic train trip through the Andes.

Iquitos— By plane or via Pucallpa.

Ica— With an interesting museum and oasis.

La Merced— 7 hr by bus and you’re in the jungle.

Mancora— A very relaxing beach in the north that parties hard nightly.

Pucallpa— Can be reached by bus or plane and is the only major river port linked by road to Lima. It’s possible to travel by boat to Iquitos from Pucallpa and on to the mighty amazon river.

Tarma— The Pearl of the Andes.

Trujillo— A city in the north home to Peru’s largest adobe ruins.

Watch a video about Lima