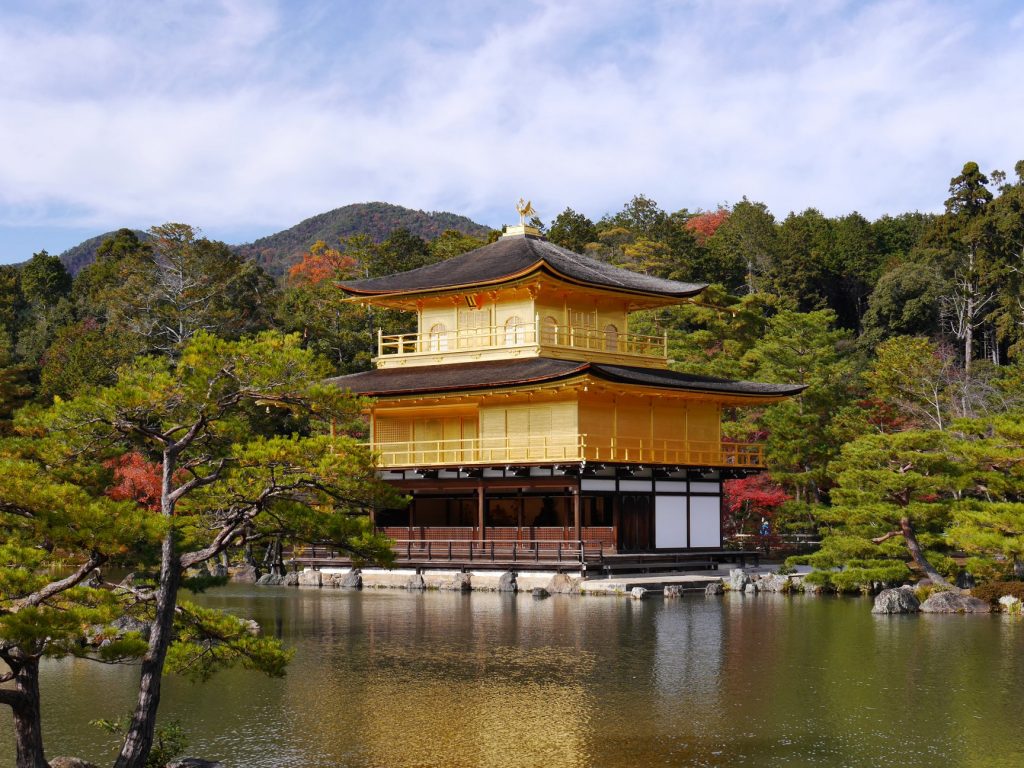 Kyoto was the capital of Japan for over a millennium, and carries a reputation as its most beautiful city and the nation’s cultural capital. However, visitors may be surprised by how much work they will have to do to see Kyoto’s beautiful side. Most first impressions of the city will be of the urban sprawl of central Kyoto, around the ultra-modern glass-and-steel train station, which is itself an example of a city steeped in tradition colliding with the modern world.

Nonetheless, when you are determined to explore Kyoto, the persistent visitor will soon discover Kyoto’s hidden beauty in the temples and parks which ring the city center, and find that the city has much more to offer than immediately meets the eye.

Nestled among the mountains of Western Honshu, Kyoto was the capital of Japan and the residence of the Emperor from 794 until the Meiji Restoration of 1868, when the capital was moved to Tokyo. During its millennium at the center of Japanese power, culture, tradition, and religion, it accumulated an unparalleled collection of palaces, temples and shrines, built for emperors, shoguns, and monks. Kyoto was among the few Japanese cities that escaped the allied bombings of World War II and as a result, Kyoto still has an abundance of prewar buildings, such as the traditional townhouses known as machiya. However the city is continuously undergoing modernization with some of the traditional Kyoto buildings being replaced by newer architecture, such as the Kyoto Station complex.

Kyoto does not have its own airport, but rather is served by Osaka‘s two airports. There is an excellent road and railway network between the two cities.

Overseas travellers can fly into Kansai International Airport and then get a train to Kyoto.

What to see. Best top attractions in Kyoto, Japan

There is a nice selection of reassuringly non-tacky traditional souvenir shops around Arashiyama station in Western Kyoto, selling fans and traditional sweets. More tacky stores can be found in Gion and the approach to Kiyomizu Temple, selling keyrings, cuddly toys, and garish ornaments. Other traditional souvenirs from Kyoto include parasols and carved wooden dolls.

More unconventional but colorful (and relatively cheap) souvenirs are the wooden votive tablets produced by Shinto shrines, which bear an image relevant to the shrine on the reverse. Visitors write their prayers on the tablets and hang them up, but there’s no rule that says you can’t take it with you.

Manga and anime enthusiasts should visit Teramachi Street, a covered shopping street off the main Shijo-dori, which boasts a large manga store on two floors, as well as a two-story branch of Gamers (a chain of anime stores), and a small two-story anime and collectables store.

Many ATMs in Kyoto do not allow non-domestic credit cards to be used, but ATMs in post offices and Seven-Eleven usually do. So if you find your card rejected or invalid in an ATM then try and get to a post office (yuubinkyoku or JP (in orange letters)) to use their ATMs instead. Look for the PLUS or Cirrus logos, whichever you find printed on the back of your ATM card. Another option is Citibank, which should work, too. There is an old standby international ATM at the top floor of Takashimaya Department Store at Shijo/Kawaramachi in the “Cash Corner.” The bank of ATMs in the basement of the Kyoto Tower shopping center (across the street from JR Kyoto Station) also includes one machine where international cards may be used.

If you’ve just stepped off the train and the first thing on your mind is a bite to eat, there are several restaurants on the tenth and eleventh floors of the Isetan department store attached to Kyoto station. Most of the offerings are Japanese, including a veritable Ramen village, with a few casual Italian cafes as well.

Kyoto, and the nearby city of Uji, is well known for its matcha(maccha) or green tea, but visitors don’t just come to drink the tea; there are a wide variety of matcha-flavored treats. Matcha ice cream is particularly popular, and most places selling ice cream will have it as an option. It also shows up in a variety of snacks and gifts.

There is one shop in Kyoto called “Maccha House” which you should really go. This is a shop which specializes in Matcha. So people can enjoy eating or drinking the original Matcha drinks and sweets which you can only eat it here in Japan. The most popular sweet in this shop is Matcha tiramisu, made out of Matcha and a type of cheese called mascarpone. It doesn’t taste so sweet, so this sweet is recommended also for people who don’t like very sweet things. But not only the taste, but also the appearance looks very attractive

Yatsuhashi is another delicious Kyoto snack. There are two types of yatsuhashi; baked and raw. The hard yatsuhashi was originally made using cinnamon, and tastes like a crunchy biscuit. Today, while the biscuits remain the same, you can also buy hard yatsuhashi dipped in macha and strawberry-flavored glazes.

Raw yatsuhashi, also known as hijiri was also made with cinnamon, but the cinnamon is mixed with bean paste and then folded into the hijiri to make a triangle-shape. Today, you can buy a wide variety of flavors, including macha, chocolate and banana, and black poppyseed. Many of the flavors are seasonal, such as the sakura (cherry blossom) yatsuhashi available in the spring and mango, peach, blueberry, and strawberry, available from May to October.

Although yatsuhashi can be purchased at most souvenir shops, the best place to purchase raw yatsuhashi is the famous Honkenishio Yatsuhashi. While other stores may carry yatsuhashi, this is the place to find all of the seasonal flavors, as well as free samples. Most of these shops are located in Higashiyama. The most convenient for tourists is probably the one on Kiyomizu-zaka, just below the entrance to Kiyomizu-dera.

While many tourists find raw yatsuhashi to be a delicious (and highly affordable) souvenir, be aware that it only lasts for one week after purchase. Baked yatsuhashi on the other hand, will last for about three months. Consider this when deciding what gifts to take home with you.

Other Kyoto specialities include hamo (a white fish served with ume as sushi), tofu (try places around Nanzenji temple), suppon (an expensive turtle dish), vegetarian dishes (thanks to the abundance of temples), and kaiseki-ryori (multi-course chef’s choice that can be extremely good and expensive).

Kyoto’s night scene is dominated by bars catering for local needs, most of which are located in Central Kyoto around Kiyamachi, between Shijo and Sanjo. This area offers a wide variety of drinking options for all types of people. You’ll also have no trouble finding the host and hostess bars, courtesy of the staff pacing around out front trying to entice visitors. There are plenty of options beyond this street in other regions, but with such a large concentration of bars along in the same area, it’s easy to locate a place where you feel most at home to relax for the night.

If you’re looking for nightclubs, Kyoto has a few options, but it is not a city known for its thriving dance clubs. Those hoping to experience that part of Japanese nightlife should consider taking a train to Osaka where many of the clubs are hip and wild enough to rival any Tokyo club.

Some of Kyoto’s most famous sake comes from Gekkeikan Brewery in the Fushimi area of Southern Kyoto. A 400 year old brewery that still produces great sake, Gekkeikan offers tours of its facilities.

Watch a video about Kyoto