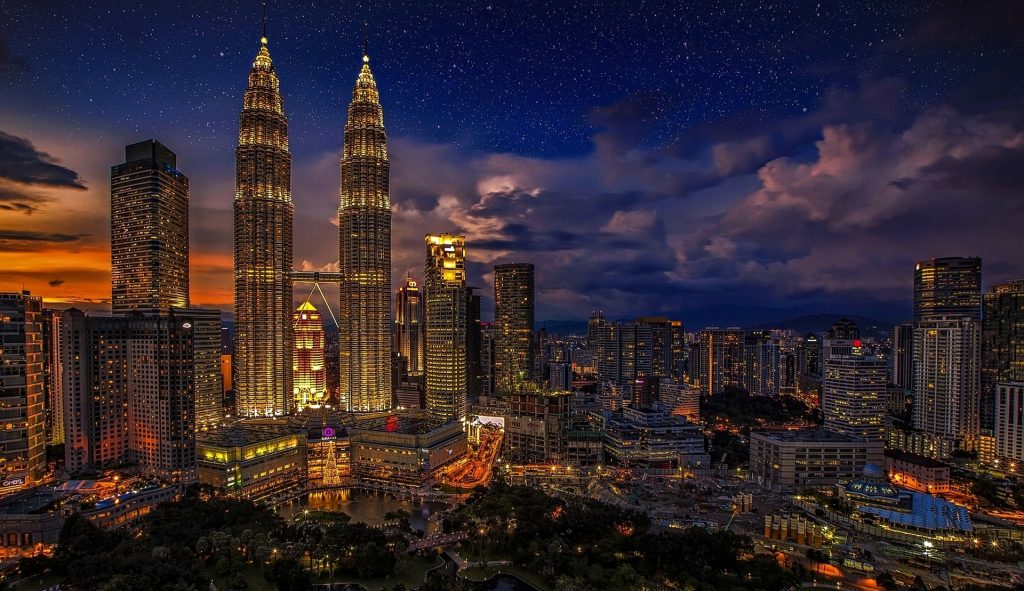 Explore Kuala Lumpur the federal capital and the largest city in Malaysia.

Literally meaning “muddy river confluence” in Malay, Kuala Lumpur has grown from a small sleepy Chinese tin-mining village to a bustling metropolis of 7 million (city-proper population- 1.8 million) in just 150 years. A cultural melting pot with some of the world’s cheapest 5-star hotels, great shopping, even better food and some of nature’s wonders in just an hour away, this dynamic city has much to offer for every visitor.

Kuala Lumpur is a sprawling city and its residential suburbs seem to go on forever.

The city can be divided into the following areas, each of which offers a particular attraction or activity.

Kuala Lumpur has a year-round tropical rainforest climate which is warm and sunny, along with abundant rainfall. It can even rain daily during the northeast monsoon season from October to March. Temperatures tend to remain constant throughout the year and hover between 31~33 °C (max. temperature) and 22~23 °C (min. temperature).

Malaysia’s transportation systems are, by regional standards, pretty well functioning. Planes, trains, buses, and taxis are linked in a system conceived and constructed by, if not an order-loving architect, at least a dedicated amateur. The planners’ aims are an ultra-modern, chic, European-style system that is a far cry from the city’s humble beginnings.

Kuala Lumpur’s ambitious public transport system is sufficiently developed to be fairly efficient and convenient, but much room for improvement lies in its integration.

Kuala Lumpur has good quality roads and a comprehensive expressway system, but driving in the city might be difficult at times due to traffic jams, a complicated web of expressways and road signage in the local language. If driving, be especially aware of sudden lane changes by cars, as well as scooters, which tend to erratically weave in and out of traffic.

Renting a car is an option for travelling in Kuala Lumpur and other parts of Malaysia. The road system is quite complicated and road signage is in the local language, so it is highly recommended that all travelers rent GPS units from their car rental company – such units are widely available, and are usually offered at reasonable rates. Drivers may also use navigation apps such as Google Maps or Waze to get around.

Petrol and parking costs are generally low, contributing to the car-culture in Kuala Lumpur that exacerbates traffic congestion. However, it would be prudent to carry a loaded Touch ‘n Go card as drivers may be required to pay for road tolls. Cash is not accepted at some toll plazas that have gone fully electronic. Congestion charges are non-existent in Kuala Lumpur.

What to see. Best top attractions in Kuala Lumpur.

KL hosts an amazing variety of architectural delights. The grandest old British colonial buildings lie in the city centre and include the former offices of the Colonial Secretariat (now the Sultan Abdul Samad Building) on Merdeka Square and the old Kuala Lumpur Railway station. They blend themes from the architecture of Britain and North Africa. On Merdeka Square’s west side, looking like a rejected transplant straight from Stratford-upon-Avon is the Royal Selangor Club. Near Merdeka Square is Masjid Jamek, a charming Moorish-style mosque set at a confluence on the Klang River. The National Mosque, Masjid Negara, (1965) celebrates the bold ambitions of the newly independent Malaysia. The National Monument in the pretty Lake Gardens is inspired by the Iwo Jima Memorial in Arlington, Virginia. The ASEAN sculpture garden is nearby. Also in the lake gardens is Carcosa Seri Negara, the former residence of the British High Commissioner, which now houses an upmarket hotel and colonial-style tea rooms. While some buildings in the high-rise Golden Triangle, such as the KL Tower, are uninspired copies of other famous structures, the Petronas Twin Towers are truly marvelous.

Within the city centre is also the fascinating narrow streets of Chinatown, Kuala Lumpur’s traditional commercial district, with its many Chinese shops and places to eat.

And if you are looking something more authentic, then head yourself to Kampong Bharu (commonly spelled as “Kampung Baru”), which is 1 of the last surviving traditional Malay villages in the middle of KL. Here, you will able to experience a glimpse of traditional Malay lifestyle and see many beautiful Kampung houses that are still well-preserved.

KL is hot, humid and sometimes crowded, so schedule some cooling off in air-conditioned shopping malls or restaurants. You may find that most attractions are only crowded on weekends and holidays and are otherwise deserted on weekdays.

What to do in Kuala Lumpur, Malaysia

KL is mainly known for its eating and shopping, which are adequately covered by the Eat and Buy sections.

Other activities include usual urban sports such as golfing, cycling, running, jogging and horse riding. If you’re into rock climbing, the Batu Caves in the Northern suburbs is popular. However given Malaysia’s stunning terrain, you’re better off heading to other places for anything more strenuous or challenging.

Several good theatres and performance halls have emerged as part of Malaysia’s drive to encourage greater cultural expression. These include the National Theatre (Istana Budaya) and the KL Performing Arts Centre (KLPac) in the northern part of the city, the KL Philharmonic in the Twin Towers, and the Actors Studio at Lot 10.

Leading museums in the city centre are the National Museum, which covers the region’s history, and the well-regarded Islamic Arts Museum, which houses a small but captivating collection. Bank Negara Malaysia Museum and Art Gallery is a modern museum linked to the country’s national bank with well-designed galleries on Malaysian economic development, Islamic finance, the history of the central bank, and the national’s banks own art collection.

Pampering and spas can be found in several five-star hotels and independent centres in the Golden Triangle. There’s also nail parlours and beauty salons, which are generally good value, there’s also high-end ones offering similar services for a premium. Reflexology and foot massage places are everywhere, especially in Bukit Bintang in the Golden Triangle and in Chinatown.

Kuala Lumpur also has several theme parks around the city and in the surrounding cities. The most famous of these parks is Sunway Lagoon situated in the neighboring city of Subang Jaya. The theme park has rides, a huge waterpark, an extreme park for adventure junkies, a scream park for those wanting a good scare, and a petting zoo for children. Sunway Lagoon is a 40 minute drive from central Kuala Lumpur in good traffic.

Skyscraper Gazing – glass and steel abound, but only one (rather a pair) shine. However, the view from the KL Tower is cheaper and better than that from the Twin Towers.

Experience of the history of KL city watching the the musical MUD.

While KL is more of a concrete jungle compared to other parts of the country, there are some natural gems that are accessible by public transport. Among them are:

FRIM Forest Reserve: You can get to FRIM via KTM Komuter. Stop at Kepong or Kepong Sentral and grab a short taxi ride. The hikes are easy and you can go up a canopy walkway for RM10.60 to get a good view of KL on a clear day. There is a nice tea house in the FRIM compound where you can sample various types of local teas and snacks. Get there early as it is more likely to rain later in the day.

KL Forest Eco Park: Formerly known as “Bukit Nanas Forest Reserve”, this urban jungle is located close to KL Tower. The forest provides for an easy trek that you can enjoy on your own; but the many specimens are likely more appreciated through guided tours which are free and can be arranged from KL Tower.

Nature Escapes Malaysia  is a good website for more details on natural trails located within or a short drive away from KL.

KL Bird Park (free-flight walk-in aviary), 920, Jalan Cenderawasih, Taman Tasik Perdana (Next to Islamic Art Museum in the City Centre. 9AM-6PM. Great semi-wild habitat for many different species of mostly Asian birds. The Bird Park allows you to approach quite close to the birds which are skittish but not fearful for some very nice photos. A bit pricey, but makes for a nice long day in a mostly shaded area. Feedings and shows throughout the day give something to see at any time, and the 20+ acres provide plenty of area to walk and explore. The photo booth offers a wide array of tamed birds that will happily sit on you and pose for photos for a small price. Concession stands are priced fairly and offer drinks, ice cream, etc.

Near the KL Convention Centre is the Aquaria KLCC which contains some 5,000 varieties of tropical fish.

What to eat  and drink in Kuala Lumpur

Internet cafés are quite plentiful in Kuala Lumpur and you can find them in most shopping centers. Many hotels provide free internet access and connections. Free Wi-Fi is also available in many café’s, restaurants and shopping centers.

Tap water in Kuala Lumpur is heavily chlorinated and thus safe, but unfortunately the pipes that carry it may not be. Most locals boil or filter it before use; alternatively, bottled water is cheap and ubiquitous.

Watch a video about Kuala Lumpur