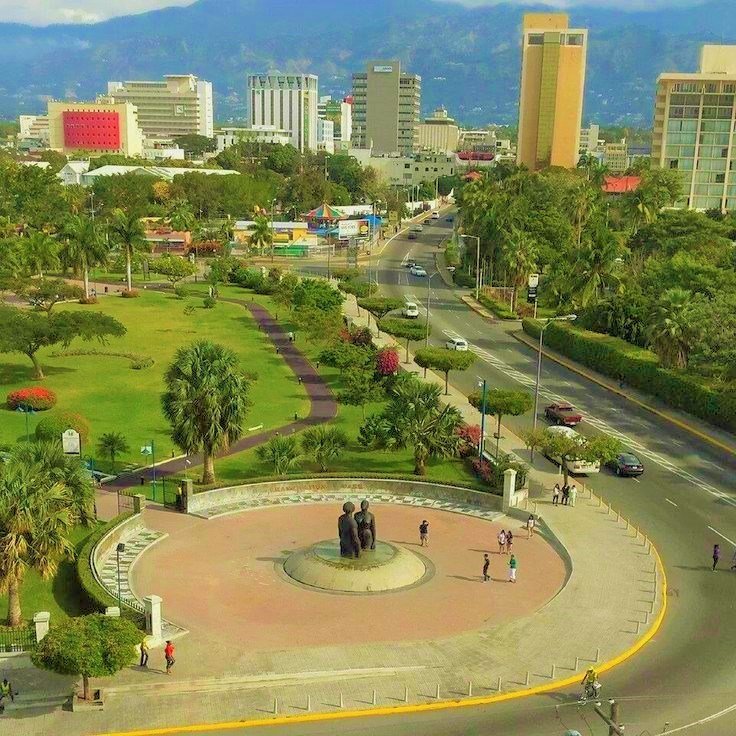 Explore Kingston, the capital of Jamaica located on the southeastern coast of the island. There are two major sections to this city: ‘downtown’ and ‘uptown,’ also referred to as ‘New Kingston.’ Kingston was for some time Jamaica’s only city and is still the commercial and cultural capital. You will notice that the city is assigned the equivalent of zip codes, (Kingston 5, Kingston 10, etc.) which is a good representation of how truly large this city is, especially for an island such as Jamaica.

Norman Manley International Airport is located in the southeastern part of the island, overlooking Kingston Harbor on the Palisadoes peninsula.

Kingston Tinson Pen There is a smaller airport closer to downtown but it does not have any regularly scheduled passenger service any more.

Kingston has an extensive and modern bus system. The Jamaica Urban Transit Company (JUTC) runs the bus system for the government, while private contractors also run the same routes. There are also minibuses and route taxis which are very affordable. Whenever in doubt, ask a bus driver how to get somewhere or where to find a certain bus; they are generally very helpful.

Public transit generally goes through one or more of the three central transportation hubs.

Downtown (Parade and The Downtown Transport Center). Keep a tight hold of your bags as petty theft is possible as in any large metropolis.

The ultra-modern Half-Way Tree Transport Center (HWT) in uptown Kingston is generally a safer area, but there are fewer buses.

Cross Roads an older, congested hub not suggested for tourists.

What to see. Best top attractions in Kingston, Jamaica.

Bob Marley Museum, 56 Hope Road. Open Mon-Sat, Tours last 1hr, including a 20min film. The first tour begins at 9:30am and the last tour at 4pm. Filled with tons of memorabilia and Bob Marley’s personal belongings, the museum is a must for any fan. The museum itself is an attraction as it was once Bob Marley’s home and recording studio. The house is a preserved historical site, so even the bullet holes from the attempted murder of Bob Marley remain. He lived here until his death in 1981. Every visitor will be added to a tour upon entry.

National Gallery of Jamaica, 12 Ocean Blvd. Tues. to Thurs. 10 AM to 4:30 PM, Fri. 10 AM to 4 PM, Sat. 10 AM to 3 PM. The museum features artwork by Jamaicans from throughout its history, from the native Taino Indians through the colonial period to works by modern artists. The gallery hosts its annual National Visual Arts Exhibition, which began in 1963 as a way to promote post-colonial art and to showcase the works of rising artists from Jamaica. Entrance fees are waved during the exhibition period

Port Royal. Once known as the “Richest and wickedest city in the world”, Port Royal is a notorious 17th century pirate haven. The most famous pirate who operated from Port Royal was Sir Henry Morgan who plundered Spanish vessels travelling in the Caribbean. The city prospered as the pirates gathered riches, but a strong earthquake struck the area on June 7, 1692 sinking the ships in the harbor and killing many people as the earthquake moved much of the city into the sea. It has been said that the earthquake was caused by God himself to punish the evildoers of Port Royal. This disaster helped to establish Kingston as the new capital, and many of the survivors of the earthquake moved to Kingston. Although most of the buildings at the port today are not the original buildings, the walls of Fort Charles have been preserved since the rebuilding two years after the earthquake, Saint Peter’s Church built in the early 18th century, and the ruins of Fort Rocky remain. There is also a museum to learn more about the history and see artifacts from its hayday.

Devon House, 26 Hope Road. The Mansion is open Mon. to Sat. from 9:30 AM to 5 PM, the courtyard from 10 AM to 6 PM, and the gardens are open daily from 9:30 AM to 10 PM,. One of the best examples of Jamaican architecture, the Devon House was built by George Stiebel, the nation’s first black millionaire. Much of the interior furniture is not original, but it upholds the 19th Century mansion style. The courtyard has craft shops, a few restaurants, and the most famous ice cream shop on the island.

Hope Botanical Gardens. Open daily 8:30 AM to 6:30 PM. The Largest Botanical Garden in the Caribbean. The garden gets its name from the man Richard Hope who helped capture Jamaica for Great Britain and was given the property to reward him for his faithfulness to the Crown. Free.

Arawak Museum (Taino Museum). A small museum with artifacts and information about the original inhabitants of the island, the Arawak (or Taino) Indians.

People’s Museum of Craft and Technology. A small museum with pottery, instruments, and farming tools used in Jamaica.

Lime Cay. Beach off the coast of Port Royale must take a boat from Port Royal fisherman or the hotel to island. Island is famous as the location for final scene in The Harder they Come. Crowded party spot on the weekends with food and drinks available for purchase, much more sedate and often deserted on weekdays. You can camp overnight if you pre-arrange a next-day pickup time, but be careful, as you can’t exactly swim to shore!

Emancipation Park. Offers free concert occasionally in the summer and during the Christmas.

Parade’s Coronation Market on weekends, where you can buy fruit and vegetables from across the island. This was gutted during the disturbances at the end of May and while there are plans to rebuild it, traders have temporarily moved to other areas.

Jamaica is famous for its hot sauces, with the major ingredient being the Scotch Bonnet Pepper, found throughout the island. Supermarkets have a bewildering selection of such sauces, from several producers.

Jerk spice powder. Make your own jerk chicken when you get home.

There’s also refreshing coconut water, cane juice, sorrel (only served around Christmas time), Irish Moss, and tamarind drink or genuine Jamaican Blue Mountain coffee (according to experts it is perhaps the best tasting, most expensive and most sought after coffee in the world). You can get premium beans from Rum, Roast and Royals in the Devon House complex.

Kingston is the host of many great clubs. Found in New Kingston, there are many clubs that party until the early morning hours.

What to do in Kingston

Watch a video about Kingston