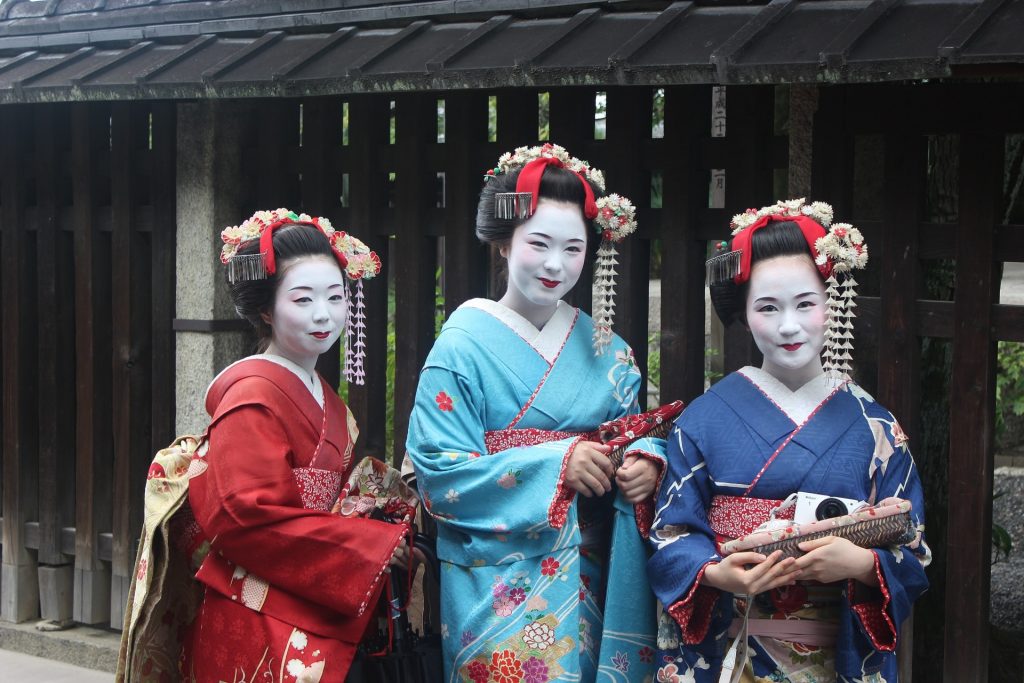 What to eat in Japan

Japanese cuisine, renowned for its emphasis on fresh, seasonal ingredients, has taken the world by storm. The key ingredient of most meals is white rice, usually served steamed, and in fact its Japanese word gohan also means “meal”. Soybeans are a key source of protein and take many forms, notably the miso soup served with many meals, but also tōfu bean curd and the ubiquitous soy sauce. Seafood features heavily in Japanese cuisine, including not only creatures of the sea but also many varieties of seaweed as well, and a complete meal is always rounded out by some pickles.

One of the joys of getting out of Tokyo and travelling within Japan is to discover the local specialties. Every region within the country has a number of delightful dishes, based on locally available crops and fish. In Hokkaido try the fresh sashimi and crab. In Osaka don’t miss the okonomiyaki stuffed with green onions and the octopus balls.

Most Japanese food is eaten with chopsticks (hashi). Eating with chopsticks is a surprisingly easy skill to pick up, although mastering them takes a while. Some chopstick guidelines to be aware of are:

The number of restaurants in Japan is stupendous, and you will never run out of places to go. For cultural and practical reasons, Japanese almost never invite guests to their homes, so socializing nearly always involves eating out.

According to the world famous Michelin Guide, which rates restaurants in major cities around the world, Tokyo is the most “delicious” city in the world with over 150 restaurants that received at least one star (out of three). In comparison, Paris and London received a total of 148 between them.

·         All-around eateries.  While most restaurants in Japanese specialize in a certain type of dish, each neighborhood is guaranteed to have a few shokudō, serving up simple, popular dishes and teishoku sets at affordable prices. When in doubt, go for the daily special or kyō no teishoku, which nearly always consists of a main course, rice, soup and pickles.

·         Noodles. Even Japanese want something other than rice every now and then, and the obvious alternative is noodles. Practically every town and hamlet in Japan boasts its own “famous” noodle dish, and they are often well worth trying.

·         Fugu or puffer fish is considered a delicacy in Japan despite being highly poisonous. It can be rather pricy due to the tremendous skill required to prepare it, which requires complete removal of the internal organs in which the poison is found. Despite the potential danger, it is highly unlikely that you will be poisoned to death by it as chefs are assessed very stringently every year to ensure their preparation skills are up to the mark, and the Japanese government requires new chefs to undergo years of apprenticeship under experienced chefs before they are licensed to prepare the dish. Because of the skill required, fugu is typically served only in speciality restaurants known as fugu-ya. As a side note, the emperor is banned from eating this dish for obvious reasons.

·         Grilled and fried dishes The Japanese didn’t eat much meat before the Meiji era, but they have picked up the habit and even exported a few new ways to eat it since then. Keep an eye on the price though, as meat (especially beef) can be fiercely expensive and luxury varieties like the famous marbled Kobe beef can cost thousands or even tens of thousands of yen per serving. Some options, usually served by specialist restaurants, include:

·         Beer gardens. During the summer months when it’s not raining, many buildings and hotels have restaurants on their rooftops and serve dishes like fried chicken and French fries, as well as light snacks. The specialty is, of course, draft beer (nama-biiru). You can order large mugs of beer or pay a fixed price for an all-you-can-drink (nomihōdai) course lasting for a set period of time (usually up to 2 hours). Cocktails and other drinks are also often available as part of all-you-can-drink sets. These beer gardens are often taken place at Ebisu.

·         Coffee shops Though Starbucks has planted its flag in Japan almost as well as in the United States, the Japanese kissaten has a long history. Most coffee shops are one-of-a-kind affairs, and reflect the tastes of their clientele. In a Ginza coffee shop, you’ll find a soft “European” decor and sweet pastries for upscale shoppers taking a load off their Ferragamos. In an Otemachi coffee shop, businessmen in suits huddle over the low tables before meeting their clients. In Roppongi’s all-night coffee shops, the night owls pause between clubs, or doze until the trains start running again in the morning.

·         Convenience stores Japan’s numerous convenience stores (konbini) can be a great place to grab a bite to eat, and they’re almost always open 24/7. Major chains include 7-Eleven, Lawson, Family Mart, Popura, and Circle K. You can find instant noodles, bento trays, sandwiches, meat buns, and even some small prepared meals, which can be heated up in a microwave right in the store. An excellent option for food on the go is onigiri (or omusubi), which is a large ball of rice stuffed with (say) fish or pickled plum and wrapped in seaweed. Some stores now offer chairs and tables to sit and eat, though not all do.

The Japanese drink a lot: not only green tea in the office, at meetings and with meals, but also all types of alcoholic beverages in the evening with friends and colleagues.

In Japan, the drinking age is 20. However, ID verification is almost never requested at restaurants, bars, convenience stores or other purveyors of liquor, so long as the purchaser does not appear obviously underage. The main exception is in the large clubs in Shibuya, Tokyo, which are popular with young Tokyoites and during busy times will ID everyone entering the club. However, most clubs will accept any form of ID. They will normally ask for a passport, but if you show them a driver’s license (legitimate or non-legitimate), they will accept it.

If you’re looking for an evening of food and drink in a relaxed traditional atmosphere, go to an izakaya (Japanese-style pub), easily identified by red lanterns with the character (alcohol) hanging out front. Many of them have an all-you-can-drink (nomihōdai) deals  for 90 min (on average), although you will be limited to certain types of drinks. Very convenient, an izakaya will usually have a lively, convivial atmosphere, as it often acts as a living room of sorts for office workers, students and seniors. Food is invariably good and reasonably priced, and in all, they are an experience not to be missed.

·         Sake/nihonshu. Sake is a fermented alcoholic beverage brewed from rice. Though often called rice wine, in fact the sake making process is completely different from wine or beer making. Sake is around 15% alcohol, and can be served at a range of temperatures from hot, to room temperature, down to chilled. Contrary to popular belief most sake is not served hot, but often chilled. Each sake is brewed for a preferred serving temperature, but defaulting to room temperature is in most cases safe.

·         Shochu is the big brother of sake, a stronger tasting distilled type of alcohol. There are largely two types of shōchū; traditional shōchū are most commonly made of rice, yam, or grain, but can be made of other materials like potatoes, too. The other is rather industrially made out of sugar through multiple consecutive distillation, often used and served as a kind of cooler mixed with juice or soda known as a chū-hai, short for “shōchū highball”. Shōchū is typically around 25% alcohol (although some varieties can be much stronger) and can be served straight, on the rocks, or mixed with hot or cold water at your choice. Once solely a working-class drink, has seen a resurgence in popularity in recent years and the finest shōchū now fetch prices as high as the finest sake.

·         Liquor Umeshu, inaccurately called “plum wine”, is prepared by soaking Japanese ume plums (actually a type of apricot) in white liquor so it absorbs the flavor, and the distinctive, penetrating nose of sour dark plum and sweet brown sugar is a hit with many visitors. Typically about 10-15% alcohol, it can be taken straight, on the rocks (rokku) or mixed with soda (soda-wari).

·         Happōshu and third beer. Thanks to Japan’s convoluted alcohol licensing laws, there are also two almost-beers on the market: happōshu or low-malt beer, and the so-called third beer dai-san no biiru), which uses ingredients like soybean peptides or corn instead of malt.

·         Western wine Japanese wine is actually quite nice but costs about twice as much as comparable wine from other countries. Several varieties exist, and imported wine at various prices is available nationwide. Selection can be excellent in the larger cities, with specialized stores and large department stores offering the most extensive offerings. One of Japan’s largest domestic wine areas is Yamanashi Prefecture, and one of Japan’s largest producers, Suntory, has a winery and tours there. Most wine, red and white, is served chilled and you may find it hard obtaining room-temperature (jō-on) wine when dining out. Convenience stores also sell inexpensive screw-top red and white wines, starting from around ¥400 a bottle.

·         Tea. The most popular beverage by far is tea (o-cha), provided free of charge with almost every meal, hot in winter and cold in summer. There is a huge variety of tea in bottles and cans in convenience-store fridges and vending machines. Western-style black tea is called kōcha; if you don’t ask for it specifically you’re likely to get Japanese brown or green tea. Chinese oolong tea is also very popular.

·         Coffee is quite popular in Japan, though it’s not part of the typical Japanese breakfast. It’s usually brewed to the same strength as European coffee; weaker, watered down coffee is called American. Canned coffee (hot and cold) is a bit of a curiosity and widely available in vending machines like other beverages. Most canned coffee is sweet, so look for brands with the English word “Black” or the kanji (“no sugar”) if you want it unsweetened. Decaffeinated coffee is very rare in Japan, even at Starbucks, but is available in some locations.

There are many uniquely Japanese soft drinks and trying random drinks on vending machines is one of the little joys of Japan. A few of note include Calpis, a kind of yogurt-based soft drink that tastes better than it sounds and the famous Pocari Sweat (a Gatorade-style isotonic drink). A more traditional Japanese soft drink is Ramune , nearly the same as Sprite or 7-Up but noteworthy for its unusual bottle, where one pushes down a marble into an open space below the spout instead of using a bottle opener.

Most American soft drink brands (Coca-Cola, Pepsi, Mountain Dew) are widely available. The only choices for diet soda will be Diet Coke, Coke Zero, or Diet Pepsi. Root Beer or Dr. Pepper is nearly impossible to find outside of specialty import food shops or Okinawa. Ginger ale is very popular however, and a common find in vending machines. Caffeinated energy drinks are available in many local brands (usually infused with ginseng). Red Bull is also commonly found in vending machines.

In Japan, the term “juice” (jūsu) is catch-all term for any kind of fruity soft drink – sometimes even Coca-Cola and the like – and extremely few are 100% juice. So if it’s fruit squeezings you want, ask for kajū. Drinks in Japan are required to display the percentage of fruit content on the label; this can be very helpful to ensure you get the 100% orange juice you were wanting, rather than the much more common 20% varieties.