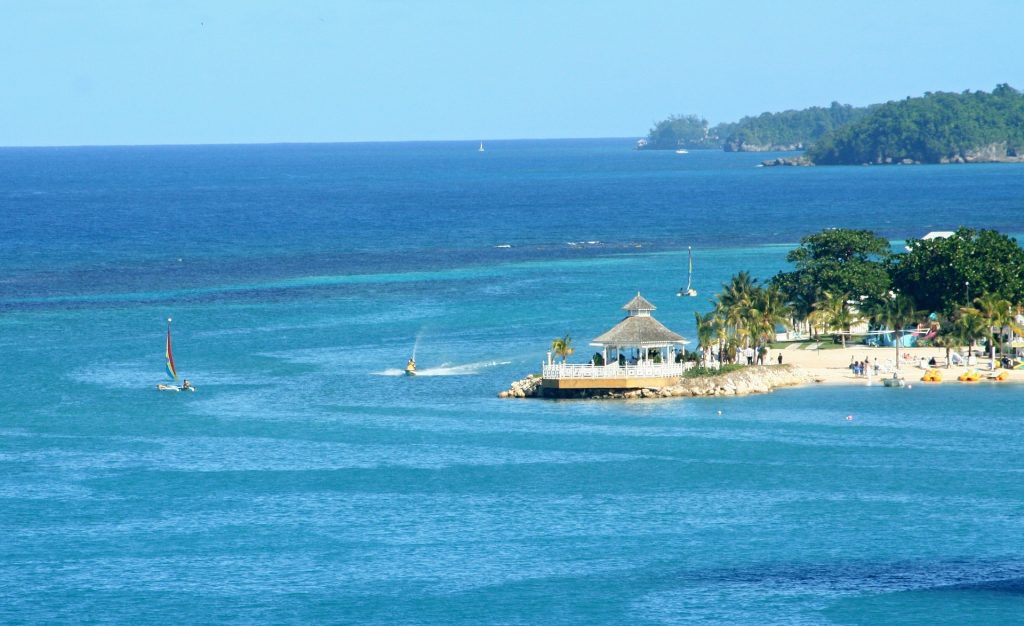 Explore Jamaica, an island nation in the Caribbean, located to the south of Cuba and to the west of the island of Hispaniola. With 2.8 million people, Jamaica is the third most populous Anglophone country in the Americas, after the United States and Canada. It remains a Commonwealth realm with Queen Elizabeth II as Head of State.

Jamaica has a large population of Chinese and East Indians. Sizeable numbers of Whites and Mulattoes, and persons of Syrian/Lebanese descent, many of which have intermixed throughout the generations. Individuals on the island seldom belong to one racial group as mixed-race Jamaicans are the second largest racial group; the genetic roots of many people can be traced to origins that are not necessarily physically apparent. Christianity is the major religion in the island.

The Arawak and Taino indigenous people originating from South America settled on the island between 4000 and 1000BC.

Jamaica was inhabited by Arawak Indians when Columbus explored it in 1494 and named it St. Iago.

Jamaica’s climate is tropical, with hot and humid weather, supporting diverse ecosystems with a wealth of plants and animals.

You can arrive by airplane at

Both airports receive vast numbers of international flights daily. There are smaller airports in Negril and Ocho Rios as well as another smaller one in Kingston, which can be accessed by smaller, private aircraft.

Although all Jamaicans can speak English, which is the official language, they often have a very thick accent and foreigners may have trouble understanding them because of this. Some Jamaicans speak a little bit of other popular languages such as Spanish.

What to see.  Best top attractions in Jamaica.

The US dollar is widely accepted in places most tourists visit. Indeed, all hotels, most restaurants, most shops, and almost all attractions in major cities will accept the US dollar.

Always stay up-to-date on the exchange rate and carry a calculator. Some places might try to make you pay ten times as much if you pay in US dollars. The cost of living in Jamaica is comparable to the United States.

Credit cards such as VISA, MasterCard and to a lesser extent American Express and Discover are accepted in many business establishments, such as supermarkets, pharmacies and restaurants in Kingston, Montego Bay, Portmore, Ocho Rios and Negril and most other major towns. A curious exception is petrol stations which mostly require cash.

ATMs are called ABMs in Jamaica and are widely available in every parish.

Jamaican food is a mixture of Caribbean dishes with local dishes. Although Jamaican food gets a reputation for being spicy, local trends lean towards more versatile food variety. Some of the Caribbean dishes that you’ll see in other countries around the region are rice and peas (which is cooked with coconut milk) and patties (which are called empanadas in spanish speaking countries). The national dish is Ackee and codfish, and MUST be tried by anyone visiting the island. It is made with the local fruit called Ackee, which looks like scrambled eggs, but has a unique taste of its own and dried codfish mixed with onions and tomatoes. You probably won’t get a chance to try this food anywhere else, and if you really want to say that you did something uniquely Jamaican, then this is your chance.

Another local food is called bammy, which was actually invented by the Arawak (Taino) Indians. It is a flat floury cassava pancake normally eaten during breakfast hours that kind of tastes like corn bread. There is also hard-dough bread, which comes in both sliced and un-sliced varieties. Try toasting it, for when it is toasted, it tastes better than most bread you’ll ever eat. If you are looking for dishes with more meat in them, you can try the jerk flavored foods. The most popular is jerk chicken, although jerk pork and jerk conch are also common. The jerk seasoning is a spice that is spread on the meat on the grill like barbeque sauce. Keep in mind that most Jamaicans eat their food well done, so expect the food to be a bit drier than you are accustomed to. There are also curries such as curried chicken and curried goat which are very popular in Jamaica. The best curried goat is made with male goats and if you see a menu with curried fish, try it.

You may even want to pick up a piece of sugar cane, slice off some pieces and suck on them.

Fruit and vegetables in Jamaica are plentiful, particularly between April and September, when most local fruits are in season. The many mango varieties are a ‘must have’ if you are visiting during the summer months. If you have not tasted the fruit ripened on the tree, then you are missing out. Try drinking ‘coconut water’ straight out of the coconut. This is not the same as coconut milk. Coconut water is clear and refreshing, not to mention the fact that it has numerous health benefits. Pawpaws, star apples, guineps, pineapples, jackfruit, oranges, tangerines, ugli fruit, ortaniques are just some of the wonderful varieties of fruit available here.

Locally grown fruits and vegetables are inexpensive. Visitors may well find that imported produce such as American apples, strawberries, plums etc. tend to be more expensive than in their home country. Grapes in particular tend to be very expensive on the island.

Chinese food is available in many places from Chinese takeout stores and has a distinct Jamaican taste.

Finally, there is the category of “ital” food, the domain of practicing Rastafarians, who abide by strict dietary guidelines. This type of food is prepared without the use of meat, oil or salt, but can still be tasty due to the creative use of other spices. Ital food is not generally on the printed menus in the upscale tourist restaurants and can only be found by going to specialty restaurants. You may have to ask around to find an establishment that serves Ital food as it is not very common.

There are many drinks in Jamaica. Standards such as Pepsi and Coca-Cola can be found, but if you want to drink local soda, you can try Bigga Cola, Champagne cola or grapefruit soda called “Ting” and also Ginger beer. Also, try any soda by Desnoes & Geddes, typically labeled as “D&G.” “Cola champagne” and “pineapple” are popular flavors that you won’t find anywhere else. Since the turn of the century, the majority of soft drinks are bottled in plastic instead of glass. You can try the local lager called Red Stripe (which is exported to many countries in the west, so there is a good chance you have already tasted it) and Dragon Stout. Most beers can be found in Jamaican pubs and hotels. A local hard drink is Jamaican Rum, which is made from sugar cane. It normally tends to be over proof and drunk with cola or fruit juice. DRINK WITH CAUTION! It’s not designed for someone who is drinking it for the first time. It is not unheard of to have 150 proof Jamaican Rum. Since Jamaica was colonized by Britain, the drinking laws are 18 and over, but they don’t generally enforce it as strictly as it would be in the Western countries.

Jamaica has the 5th highest murder rate in the world. As in any other foreign country, should any emergency situation arise, especially at the domestic level, it is advised to immediately contact your government’s embassy or consulate. Governments usually advise travellers staying in the country for an extended period of time to notify their embassy or consulate so they can be contacted in the case of emergency.

September, October, and November have a lower number of tourists due to being hurricane season. As a result, the police are encouraged to take their vacation during this time. This reduction in the police force can cause areas like Montego Bay’s hip strip to be less safe than they normally are.

The tap water is generally good and safe to drink. All piped water in Jamaica is treated to international standards, and will be of the same quality you could expect to find in North America or Europe. Water service in rural areas can sometimes go out for several hours at a time.

Many Jamaican people are very generous and warm. Returning this warmth and friendliness is a great way to show them you appreciate their country when you explore Jamaica.

Watch a video about Jamaica