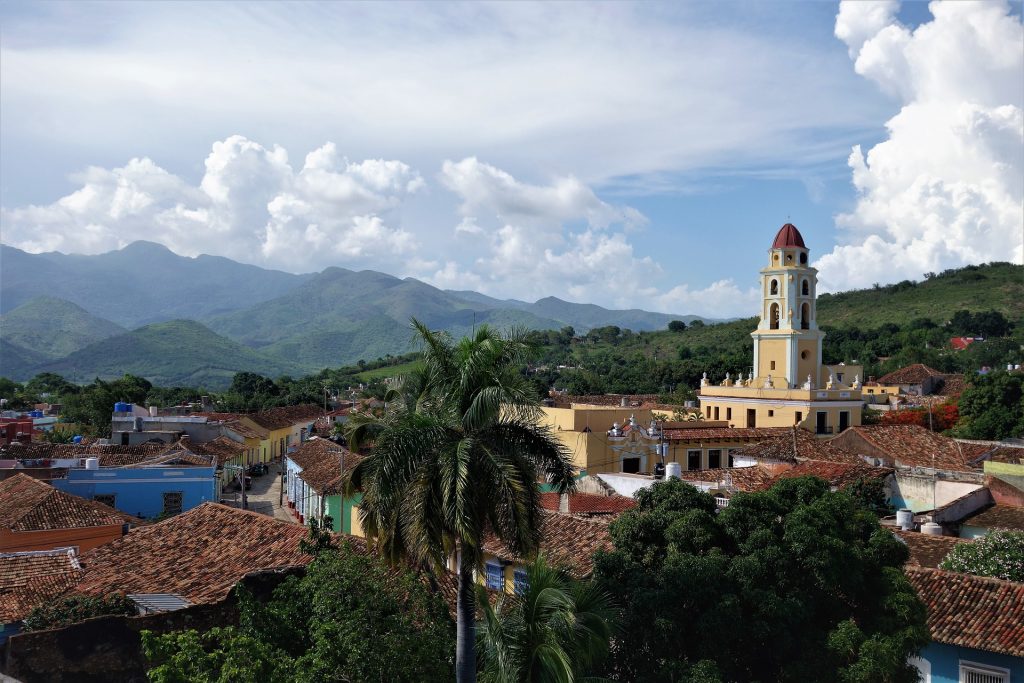 Explore Havana, the capital city of Cuba, and one of the fourteen provinces of the Republic of Cuba.

Before the Communist revolution, Havana was one of the vacation hot-spots of the Caribbean, and since Cuba reopened to tourism in the 1990s, it has become a popular destination once again, albeit with many fewer U.S. citizens, due to an almost total ban on travel maintained by the U.S. federal government. However, there will be lots of tourists at any time of year, so expect huge crowds and long lines in places.

Jose Marti International Airport  has three separate terminals. Terminal 1 is for internal (domestic) flights, Terminal 2 is mainly for charter flights from the USA and Terminal 3 is used for all other international flights.

All luggage is scanned by X-ray after deplaning and after going through passport control. Customs officials can be very strict, and may snoop out any suspicious electronics or other items. However, if you are only taking a computer and camera equipment, they are more likely to just wave you through and not take a second look at your customs forms. Customs officials and immigration officials also work slowly and baggage reclaim is very slow, so expect a very long wait when entering the country.

To get around Coco taxis are cheap transport. Coco Taxis and yellow three wheel motorbikes are a cheap way of getting around central Havana.

As a tourist, the most convenient way of getting around Havana is by taxi. Some of the taxis are old American Chevys from the 1950’s, others are (somewhat) newer Russian Ladas, whilst most tourist taxis are modern Peugeots, Skodas and even Mercedes.

It is illegal for tourists to ride in anything other than the official government taxis.

Walking around Havana is by far the best way to see and experience the city: get a decent map of the city and discover new sights on foot. Many choose to do it with a local tour guide. Most of them are foreign language teachers, others can even be doctors. You will find the best on line.

What to see. Best top attractions in Havana, Cuba

Nearly every restaurant and hotel in town has a decent house band playing old favorites.

Havana is a surprisingly expensive city to stay in; if you stay in hotels and eat in restaurants it can work out to be nearly as expensive as other popular international destinations.

ATMs are not too hard to find in downtown Havana, but bear in mind that American credit- and debit-cards cannot be used in Havana. Note that even credit cards issued in countries other than the USA may be issued by a bank whose parent company is a U.S. corporation. In this case, the card will not work as the parent company is bound by U.S. law. Even banks wholly owned by non-American companies may have a policy on blocking Cuban transactions in order not to compromise their US business. Always check with your bank or Credit Card Company before leaving home to see if your card will work in Havana. Also, the ATMs do not accept MasterCard/Maestro but are marked to accept Visa.

Cocktails in Cuba are of surprisingly uniform prices nearly anywhere you go (except state-run hotels like Hotel Nacional, which charge more). While the prices are nearly uniform, the quality and quantity vary massively.

You can have a great time just outside of the Hotel Inglaterra near the Capitólio Building, drinking good daiquiris and mojitos at an affordable price.

There are two types of establishments you can go to to drink in Havana: Western-style CUC bars with near-Western prices, a good selection of quality drinks (and sometimes food), nice decorations, semi-motivated staff and often live music, typically found around tourist hot-spots such as Old Havana and tourist hotels. Here you will mostly meet other tourists, expats and a few Cubans with access to hard currency, but don’t expect a ‘local’ experience.

The alternative is to seek out local neighborhood bars where you can choose from a quality, but limited, selection of drinks (mainly locally produced rum by the bottle, beer and soft drinks, very rarely will you be able to get cocktails such as mojitos), cigars of dubious, cigarettes of only slightly better quality, and sometimes snacks. Local bars accept CUPs and are dirt-cheap, although bar keepers will often ask you for CUCs instead – it’s up to you to negotiate an acceptable price, but keep in mind that local bar staff are state employees and (literally) paid a pittance. These bars are also a good way to meet locals who may even open up a bit and talk about their lives after a couple of drinks.

Local bars are not that hard to find despite typically having no prominent signs displayed outside. Just ask or walk around a local neighborhood and look out for a bare-walled, neon-lit run-down room without any decorations or furniture, save for a bar and a few rickety chairs and tables, sullen staff and depressed/bored/drunk-looking customers, almost always men. Contrary to Cuba‘s reputation as a music and fun loving nation, these places are not boisterous affairs – they are quiet, almost subdued, music is rarely played (if at all, it will come from a radio but never be live), and have the charm of third-world railway station waiting rooms.

Nonetheless, they make for a fascinating experience (especially if you make the effort to speak to some locals – offering to buy a drink will get a conversation going, no surprise there), and they provide a good insight into what life must be like for ordinary Cubans without hard currency. As a foreign visitor, you will be generally welcomed.

There are 3 main areas that travelers generally stay in: Old Havana is the liveliest (some would say hectic and dirty), Central Havana is slightly quieter and parts can be a bit seedy, and Vedado is the quietest with more greenery, and is the place to find the large hotels and nicer casas particulars.

Hotels vary. While everywhere should have hot water and steady electricity, you cannot necessarily expect air conditioning (although many do have it), nor TV, and you will have to be extremely lucky to find a place with Wi-Fi.

Havana is quite safe for a large city. Heavily dependent on tourism, Cuban police are everywhere and pay special attention to spots where travelers congregate, so you don’t have to be afraid of being accosted in the daytime. Prison sentences for crimes involving tourists are extremely harsh, a fact which residents are well aware of, which adds an extra layer of deterrence. Violent crime is rare. It is relatively safe to walk at night throughout Havana when compared to other Latin American cities, though pickpocketing and theft is common, so make sure not to leave your belongings unattended. Be wary of hustlers (jinteros/as) offering to show you a place to eat or offering a tour of the city, as you’ll be stuck paying hefty prices to cover their commission. Just walk away and continue walking — soon enough they will leave you alone. In local restaurants, ask for menus or prices before ordering anything; there can be special ‘tourist price menus’ that get pulled out after you have consumed food or drink. If you’re male, expect to be accosted regularly by prostitutes and/or their pimps. While technically illegal, erstwhile mandatory jail time for prostitution filled prisons so quickly that the regime had little choice but to start looking the other way.

Ride the electric train to Matanzas One of the oldest electric trains in the world runs four times daily from Havana to Matanzas. It was built by Hershey and runs through their decrepit chocolate town. It’s like riding a metro for 92km through villages and countryside. Leaves from Casablanca across bay; there are ferries running there in calm weather.

Watch a video about Havana