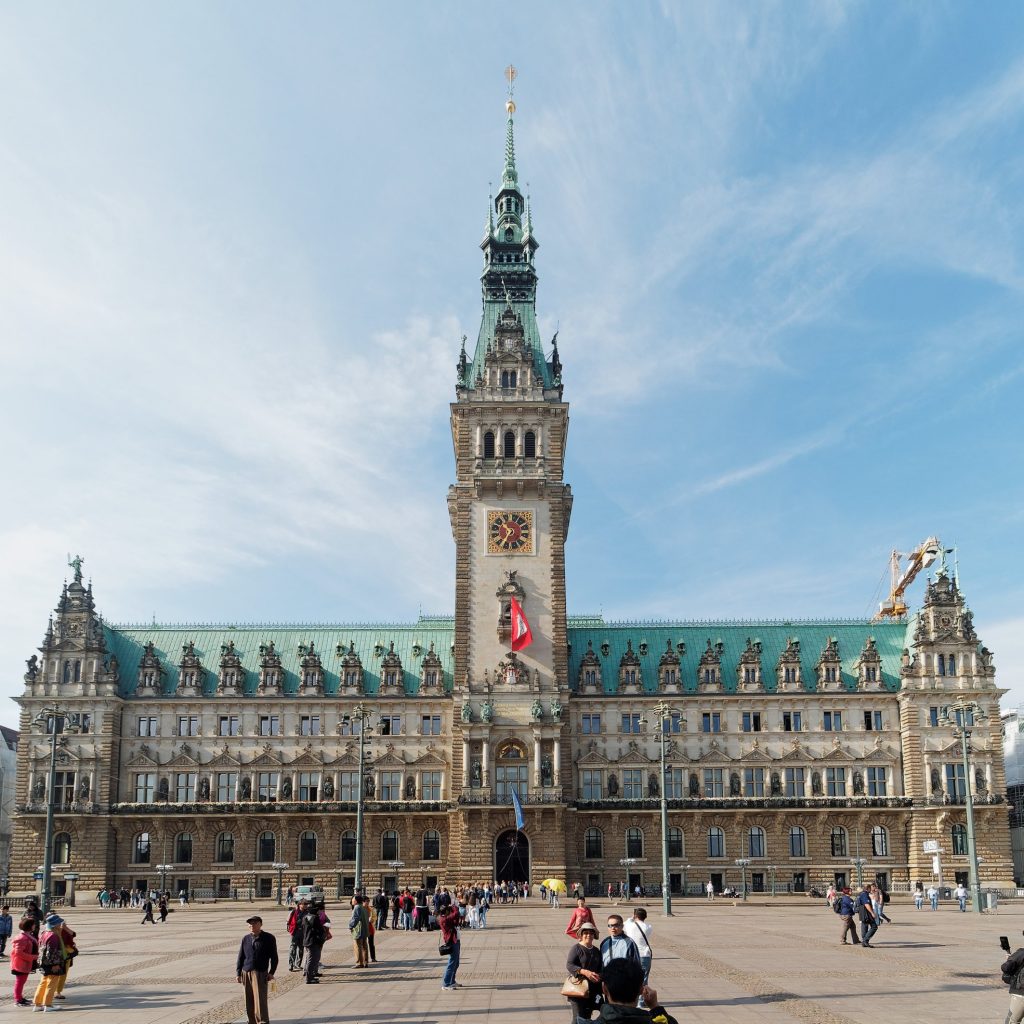 Explore Hamburg, which has a well-deserved reputation as Germany‘s Gateway to the World. It is the country’s biggest port and the second-busiest in Europe, despite being located astride the River Elbe, some 100 kilometers from the North Sea. It is also Germany’s second largest city with a population of over 1.8 million and the Greater Hamburg Metropolitan Region has a population of over four million. Hamburg is proud of its status as a “Free and Hanseatic City” and thus shares the same status as a province, making up one of Germany’s 16 federal-states or Bundesländer.

One of the most important harbors in Europe and the world, Hamburg takes great pride in its mercantile background, which built the city’s wealth in the past centuries. From 1241 on, it was member of the Hanseatic League, a medieval trade monopoly across Northern Europe. In the 19th and beginning of the 20th century, millions left Europe on their way to the new world through the Hamburg harbor. Today, the harbor ranks second in Europe and eleventh world-wide. Consequently, one of Hamburg’s tag lines is “The Gateway to the World” (derived from the city’s coat of arms, showing a white city wall with a gate and crowned by three towers on a red background). Hamburg is known to be one of the richest metropolitan areas in the European Union, in the company of Brussels and London.

The harbour is the heart of the city, however, Hamburg is also one of the most important media hubs in Germany. Half of the nation’s newspapers and magazines have their roots in Hamburg. And, unknown even to some locals, is the fact that, with one of the Airbus aircraft assembly plants, Hamburg is a major location of the world’s aerospace industry, right after Seattle (USA) and Toulouse (France).

The mercantile background reflects in the city’s architecture. The most notable palace in Hamburg is the town hall, which houses the citizen’s parliament and the senate. The only other palace of the city is located in the urban district of Bergedorf. Apart from that, the city has a few impressive mansions in public parks and still has large quarters with expensive houses and villas. These residences were home to merchants and captains, surrounded by lots of greenery. Large parts of the city were destroyed during the devastating air raids of World War II, particularly the port and some residential areas, killing tens of thousands and leaving more than a million homeless, yet much of historic value has been preserved, although not as much as people would have wished for, as like many German cities,it’s cursed by horrible post war buildings and disgusting office blocks.

Hamburg still keeps its tradition of being an open, yet discreet city. Citizens of Hamburg, just like most Northern Germans, may appear to be quite reserved at first. Once they get to know with whom they are dealing, they’ll be as warm and friendly as you’d wish.

Hamburg has a well-developed public transport system. Buses go around the clock. At night, a special “Nachtbus” (night bus) service connects the outlying districts and the city center. The buses depart and arrive at “Rathausmarkt”, near the town hall and operate all through the night. The S-Bahn and U-Bahn (metro) train services (underground and over ground) run from approximately 5AM until 1AM in the central city, but there is often no service past 11PM in outlying districts. On weekends, it runs all night.

What to see. Best top attractions in Hamburg, Germany

What to do in Hamburg, Germany

Full shopping tour starts at central station, down to town hall, then Poststrasse towards Gaensemarkt square and back on Jungfernstieg at the Alter lake side.

The main shopping area of Hamburg is the Mönckebergstraße in the centre of the city. Take the subway to either central station, Rathaus (town hall), or Mönckebergstraße. Also check the side-street Spitalerstraße. West of town hall towards Gaensemarkt are the more pricey shops like Hugo Boss.

Shops are mostly open daily 10AM—8PM and on Thursday and Friday until 10PM.

Hamburg has quite many shops which claim “Second Hand”, but are more of an outlet. It’s still worth a visit though.

Alsterwasser in Hamburg (a reference to the city’s river Alster with two lake-like bodies in the city centre thanks to damming), a type of, a concoction of equal parts of beer and carbonated lemonade (Zitronenlimonade), the lemonade being added to the beer.

Hamburg is also home to a curious regional dessert pastry called Franzbrötchen. Looking rather like a flattened croissant, the Franzbrötchen is somewhat similar in preparation, but includes a cinnamon and sugar filling, often with raisins or brown sugar. The name may also reflect to the roll’s croissant-like appearance – franz appears to be a shortening of französisch, meaning “French”, which would make a Franzbrötchen a “French roll.” Being a Hamburg regional food, the Franzbrötchen becomes quite scarce outside the borders of the city; as near as Lunenburg (Lüneburg) it can only be found as a Hamburger and is not available in Bremen at all.

Ordinary bread rolls tend to be oval-shaped and of the French bread variety. The local name is Rundstück (“round piece” rather than mainstream German Brötchen, diminutive form of Brot “bread”), a relative of Denmark‘s rundstykke. In fact, while by no means identical, the cuisines of Hamburg and Denmark, especially of Copenhagen have a lot in common. This also includes a predilection for open-faced sandwiches of all sorts, especially topped with cold-smoked or pickled fish. The American hamburger seems to have developed from Hamburg’s Frikadelle: a pan-fried patty (usually larger and thicker than the American counterpart) made from a mixture of ground beef, soaked stale bread, egg, chopped onion, salt and pepper, usually served with potatoes and vegetables like any other piece of meat, not usually on a bun. Many Hamburgers consider their Frikadelle and the American hamburger different, virtually unrelated. The Oxford Dictionary defined a Hamburger steak in 1802: a sometimes-smoked and -salted piece of meat, that, according to some sources, came from Hamburg to America.

Generally, Hamburg is a safe city.

The usual precautions should be observed against pickpockets, especially in crowded situations and along the tourist and shopping areas.

Some extra care should be taken on visits to the Reeperbahn area:

Any kind of weapon is prohibited during weekend party times. This includes glass containers. You may not bring glass bottles. Bars or clubs will not let you exit with glass bottles in hand and shops will not sell glass during that time.

Sex workers offer their services on the sidewalk and can be very insistent, even holding on to you and coming after you a few steps (until they come to another’s spot). Male-only groups are especially targeted, female company will give you some ‘protection’.

Table dance bars have been known for extortionate billing with innocent requests from girls for drinks and then ordering the most expensive item at the slightest semblence of agreement. Settling the 500-Euro-or-more bills might include threats of violence, even a forced trip to the nearest ATM with your company being kept behind.

You might want to report such incidents to the police and chances are that they will believe your story.

Keep your distance from demonstrations unless you wish to get involved: both leftist groups and the Hamburg police are known for their heavy reactions in such situations.

Tap water is very clean and safe to drink, even to prepare food for infants.

Both North Sea and Baltic Sea beaches are reachable within an hour by car, railway, or bus.

Lübeck (Luebeck) — The city borders the Baltic Sea. The old city (Altstadt) survived from medieval times and is part of the UNESCO World Heritage List. About 60 km northeast of Hamburg, direct trains leave from main station every hour.

Lüneburg — A city in Lower Saxony, about 50 km southeast of Hamburg. Like Lübeck, Lüneburg’s old town has kept a medieval look with old buildings and narrow streets. The town is situated in the beautiful Lüneburger Heide. South of Hamburg, direct trains leave from main station every hour.

Altes Land — This region is the biggest connected fruit growing area of Central Europe and the one the furthest north in the world. Altes Land is an area of marshland south of the river Elbe in Hamburg and Lower Saxony around the old towns of Stade, Buxtehude, and Jork. A characteristic feature is the richly-decorated farmhouses with their elaborate gateways.

Ahrensburg — Ahrensburg is a northeastern suburb of Hamburg, situated in Stormarn district. Its outstanding sight is the Renaissance castle dating from 1595. Ahrensburg is easily accessible by car and train (Hamburg public transport).

Kiel — Kiel’s main tourist attraction is the “Kieler Woche” (Kiel Week) at the end of June, the largest sailing event in the world and one of Germany‘s largest festivals.

Watch a video about Hamburg