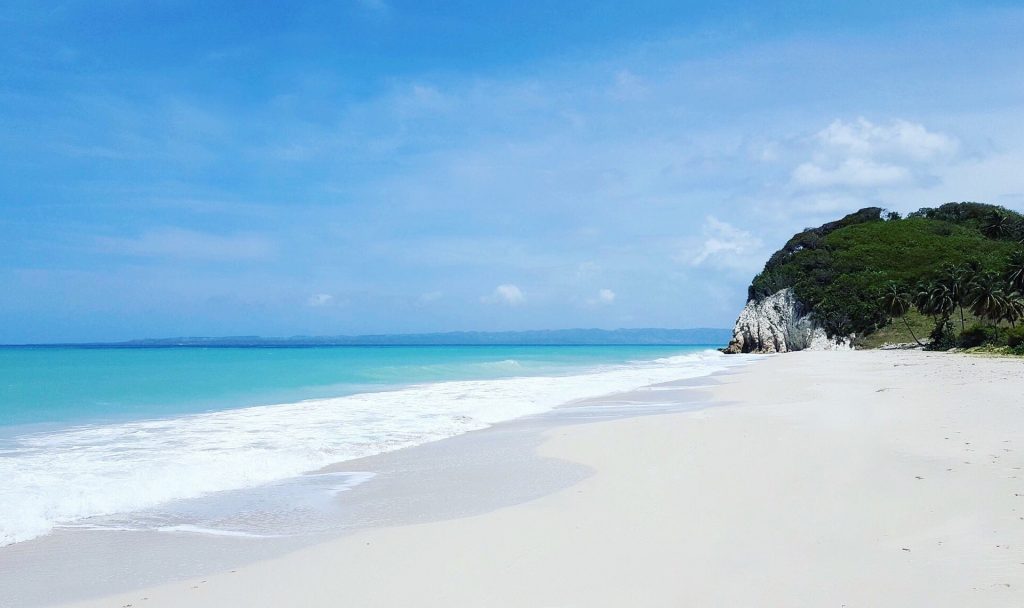 Explore Haiti, the Caribbean country that occupies the western third of the Caribbean island of Hispaniola. The eastern two-thirds of Hispaniola is occupied by the Dominican Republic. To the north lies the North Atlantic Ocean, while the Caribbean Sea lies to the south. Haiti is a country with a revolutionary, exciting past and its future still remains uncertain. Though Haiti has faced hard times during the past decades, Haiti’s tourism industry which bustled in the 60s to the 80s is returning. Resorts and investments are transforming this misunderstood gem into a Caribbean tourist spot once again

Its climate is tropical and semiarid where mountains in the east cut off trade winds, Haiti lies in the middle of the hurricane belt and is subject to severe storms from June to November and it experiences occasional flooding, earthquakes and droughts.

Mostly mountainous, with a wide, flat central plain to the north. The highest point is Chaine de la Selle at 2,777m. Haiti’s mountainous terrain makes it heaven for those who love to hike and explore

Haiti was inhabited by the native Taino Indians when Christopher Columbus landed on 6 December 1492 at Mole St Nicolas. Columbus named the island Hispaniola. The Taino were a branch of the Arawak Indians,a peaceful tribe that was weakened by frequent violent invasions by the cannibalistic Carib Indians. Later, Spanish settlers brought smallpox and other European diseases to which the Taino had no immunity. In short order, the native Taino were virtually annihilated. There is no discernible trace of Taino blood on Haiti today. The current inhabitants have exclusively African and/or European roots.

What to see. Best top attractions in Haiti

International travellers will arrive in Haiti at Port-au-Prince (PAP) at the Aéroport Toussaint L’Ouverture Airport or (CAP) Aéroport International Cap-Haïtien in the North.

The official languages of Haiti are French and Haitian Creole (Kreyòl Ayisien), which is a French-based creole language, with 92% of the vocabulary being derived from French and the rest primarily from African languages and native Taino, with elements of Spanish. Haitian Creole is the native language of the masses, while French is the administrative language, even though only 15 % of Haitians can speak it and only about 2% can speak it well.

Labadee is a resort leased long term by Royal Caribbean International. Although sometimes described in advertisements as an island in its own right, it is actually contiguous with the rest of Hispaniola. Labadee is fenced off from the surrounding area. The cruise ships arrive and dock at a newly constructed pier. Attractions include a Haitian Flea Market, traditional Haitian dance performances, numerous beaches, water sports, and a waterpark. But be aware that you have to pay to get inside. Also be aware that Haitians are not allowed to come inside, so almost all your spendings go to Royal Caribbean International and not to the people of Haiti.

Lately the city of Jacmel, due to its reputation as being less politically volatile, its French colonial era architecture, its colorful cultural carnival, pristine beaches and a nascent film festival has been attracting local tourists and a small amount of international tourism.

The main attraction of Haiti is for sure the Citadelle La Ferriere, which is the largest fort of the Americas. You can see the cannonballs and old weaponry that lies there. You can travel by foot or horse. It was built as a safety measure against attacks from France, after the people who were brought to Haiti as slaves and their descendants defended themselves against the French colonialists and established the first black republic. The fort itself was located in the kingdom of North Haiti, which was ruled by Henri Christoph, one of the leaders of the former slave rebellion. The fort is a piece of Haiti’s rich history and should be treated with respect while visiting. It also lies on top of a mountain, which will also give you the opportunity to enjoy the best view over Haiti. At the bottom of the mountain you can find also the ruins of the castle Sans Souci, in which the wife of Henri Christoph used to live.

Despite obstacles, Haiti’s rich culture and history has allowed the country to maintain a moderate and potentially rising tourist industry. For the most part independent travel around Haiti is not really practical or recommended however there has been a slow revival of tourism since the earthquake.

Haiti has become famous for its very informal yet interesting bustling marketplace. Everything is sold here ranging from the curiously appealing to the dullest of objects for rather inexpensive prices. Haggling is both wise and recommended, as most Haitians will charge foreigners at least double the market rate. There are various large retail supermarkets in the capital that offer a variety of items at fixed prices. Haiti has a world of crafts waiting to be sought after.

Haitian cuisine is typical of Caribbean métissage, a wonderful mix of French and African sensibilities. It is similar to its Spanish Caribbean neighbors yet unique in its strong presence of spices. Roast goat called ‘kabrit’, morsels of fried pork ‘griot’, poultry with a Creole sauce ‘poulet creole’, rice with wild mushroom ‘du riz jonjon’ are all wonderful and tasty dishes.

Along the coast fish, lobster and conch are readily available. Haiti has a very fine collection of fruit including guava, pineapple, mango (Haiti’s most prized fruit), banana, melons, breadfruit, as well as mouthwatering sugarcane cut and peeled to order on the streets. Restaurants in the bigger cities provide safe and delicious meals, and precautions are taken with the food and water to keep things safe.

A Haitian typical meal usually contains rice (usually brown or white). A popular meal you might find is pressed fried plantains, fried pork, and a cole-slaw like topping commonly known as “pikliz”.

Tap water should be avoided. Drink bottled water only. When bottled water or boiled water is not available, a freshly opened coconut provides water and electrolytes with minimal health risk.

The legal drinking/purchasing age of alcoholic beverages is 16.

Haitian rum is well-known. ‘Barbancourt 5 star’ is a top drawer drink. ‘Clairin’ is the local firewater made from sugarcane that can be bought on the street, often flavored with various herbs that can be seen stuffed into the bottle. ‘Prestige’ is the most popular beer, and is of good quality and excellent taste. Also be sure to try the ‘Papye’ drink, a sort of papaya milk shake that is deliciously refreshing beyond words on a hot day. Cremas is a tasty, creamy alcoholic beverage that is derived from coconut milk.

You can learn many things while traveling to Haiti, professionally, or unprofessionally. Haiti has a museum located in Port Au Prince where you can learn about Haiti’s history. This includes learning about the founding fathers of Haiti, defense tactics they used, old documents, and even the crown of Henri Christophe who ruled north Haiti in the 1800s.

A Taïno Museum (Taïnos being the first inhabitants of Haiti) is being developed, and more information regarding that are underway

When you explore Haiti, be sure to keep up with latest news. Demonstrations can happen, but aren’t very common.

It’s not the best to travel at night, but there are tourist, police, and UN officers marching around, especially during the night.

Watch a video about Haiti