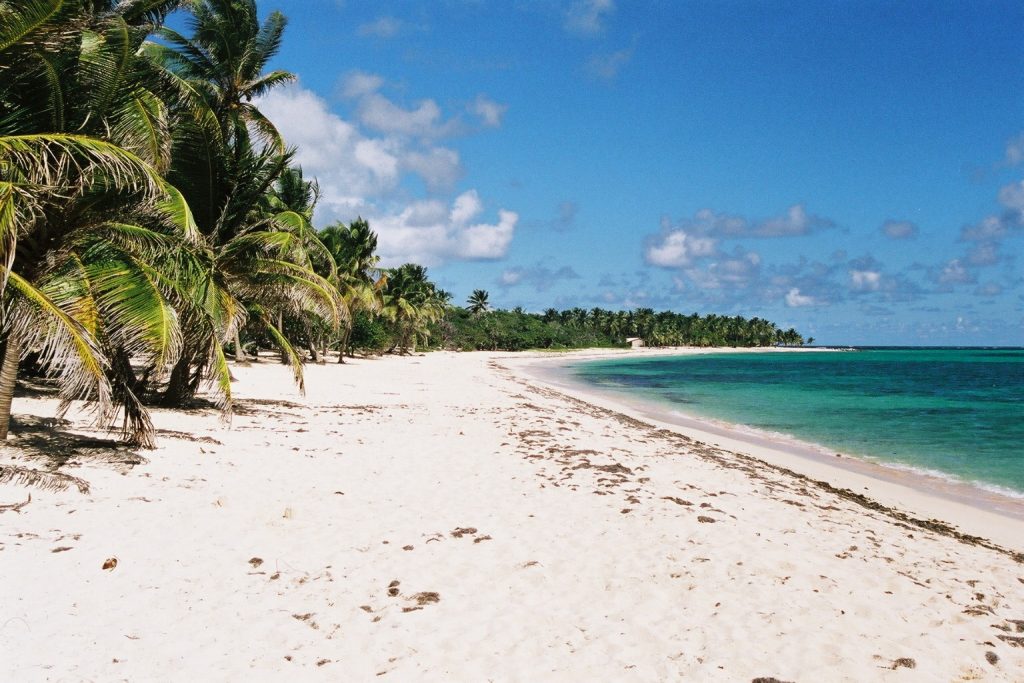 Explore Guadalupe sometimes known as the Butterfly Island, on account of the shape of two of its major islands.

Guadalupe is a group of islands in the eastern Caribbean forming an overseas region of France. It consists of six inhabited islands, Basse-Terre, Grande-Terre, Marie-Galante, La Désirade, and the Îles des Saintes, as well as many uninhabited islands and outcroppings. It lies south of Antigua and Barbuda and Montserrat, southeast of Puerto Rico and north of Dominica. Its capital is Basse-Terre on the west coast; however, the largest city is Pointe-à-Pitre.

Like the other overseas departments, it is an integral part of France. As a constituent territory of the European Union and the Eurozone, the euro is its official currency and any European Union citizen is free to settle and work there indefinitely. As an overseas department, however, it is not part of the Schengen Area. The official language is French; Antillean, Creole is also spoken.

Guadeloupe is an archipelago of more than 12 islands, as well as islets and rocks situated where the northeastern Caribbean Sea meets the western Atlantic Ocean. It is located in the Leeward Islands in the northern part of the Lesser Antilles, a partly volcanic island arc. To the north lies Antigua and Barbuda and the British Oversea Territory of Montserrat, with Dominica lying to the south.

The main two islands are Basse-Terre (west) and Grande-Terre (east), which form a butterfly shape as viewed from above, the two ‘wings’ of which are separated by the Grand Cul-de-Sac Marin, Rivière Salée and Petit Cul-de-Sac Marin. More than half of Guadeloupe’s land surface consists of the 847.8 km2 Basse-Terre. The island is mountainous, containing such peaks as Mount Sans Toucher (4,442 feet; 1,354 meters) and Grande Découverte (4,143 feet; 1,263 meters), culminating in the active volcano La Grande Soufrière, and the highest mountain peak in the Lesser Antilles with an elevation of 1,467 meters (4,813 ft). In contrast Grande-Terre is mostly flat, with rocky coasts to the north, irregular hills at the centre, mangrove at the southwest and white sand beaches sheltered by coral reefs along the southern shore. This is where the main tourist resorts are found.

Marie-Galante is the third-largest island, followed by La Désirade, a north-east slanted limestone plateau, the highest point of which is 275 meters (902 ft). To the south lies the Îles de Petite-Terre, which are two islands (Terre de Haut and Terre de Bas) totaling 2 km2.

Les Saintes is an archipelago of eight islands of which two; Terre-de-Bas and Terre-de-Haut are inhabited. The landscape is similar to that of Basse-Terre, with volcanic hills and irregular shoreline with deep bays.

In the town: You can enjoy the boardwalk during the day as well as in the evening. For the people who like surfing and have a good level, you can find one of the famous surf spot of Guadalupe at the entrance of the town. You can find a shopping mall at the entrance of the town and in the downtown. Shops are open from Monday to Saturday, including Saturday afternoon, something rare in Guadalupe. You can see a very charming downtown with its church, its old ruins. Going to Saint-François Direction: If you look for a beach, you can go in the beach “l’autre bord” or “l’anse à l’eau”, when you leave downtown. You will see the “maison Zavellos” which is an old colonial house. Some say it’s a haunted house. The town of Moule also has, one of the first rum distilleries which produce the famous Damoiseau rum. If you like walking, you can go to the “baie Olive” there are beautiful cliffs or go to the beach “plage des rouleaux”.

Even though it might not be the best way to get around the island, a ride on the bus is still an experience you should not miss. Cheap, full of locals, conducted by fearless drivers, you can enjoy the beautiful Caribbean panorama to the sound of Guadalupean zouk music. Some routes are not good for passengers with weak stomachs. If you’re careful, you can hitch a free ride on the back for some “realistic” tourist experience.

Guadalupe is a very mixed island culturally waves of successive immigrations of Indians, Lebanese, Syrians, Chinese makes it an Eldorado where living together is paramount.

Cars can be hired at the airport in Pointe-à-Pitre or booked online on sites such as Rentacar and Satevan. The main roads are of the same quality as metropolitan France, but smaller roads are often uneven, pot-holed and frankly dangerous. Prudence is required! Drivers are often undisciplined, but rarely aggressive.

What to do in Guadalupe

Scuba diving and snorkeling. There is an amazing assortment of tropical fish, even in water less than one meter deep. For those who can’t swim, glass bottomed boat trips are on offer.

There are many festivals to attend to in Guadalupe. In Guadalupe they call them “parties on the street”. They use colorful ribbons and tie them round their wrists to resemble the colors of all the nations. Their parties last all through the night until the early morning. They sometimes call them “swatson”.

Characteristic of the Antilles is the colorful tiled Madras fabric.

The local made rum is also distinctive and very cheap to buy. Certainly worth sampling (during an evening at one of the beautiful beaches or at home when showing vacation pictures to friends and family to warm everyone up to Caribbean temperature)

Not to be missed, the plate Colombo (chicken, rice, curry), imported from India, has become the typical regional plate.

The local drink is white rum. Do try the “‘Ti Punch” (Petit Punch/small Punch) (rum, lime, and sugar cane/brown sugar). Packs a wallop, so be prepared to melt into the island way of life.

Also, keep hydrated, especially when hiking in the mountainous areas. A hat is often a good thing to have because the sun can get extremely hot.

While officially a part of France, the country does not have a Europeanized way of life. In fact, life in the Caribbean has a much slower pace. Busses run very infrequently, taxis are hard to find, smaller stores open or close not always on time, queuing in stores is sometimes very time consuming. Try to fall into the local pace and do not complain about minor annoyances as Guadalupians will see that as an offense to their way of life. And they are proud of the distinction between Caribbean and metropolitan (French) life style!

In most Post Offices you will find an automatic machine (yellow) with a scale and a screen. Just put your mail on the scale, tell the machine (French or English) the destination, pay the indicated amount and the machine will deliver a printed stamp.

Watch a video about Guadalupe