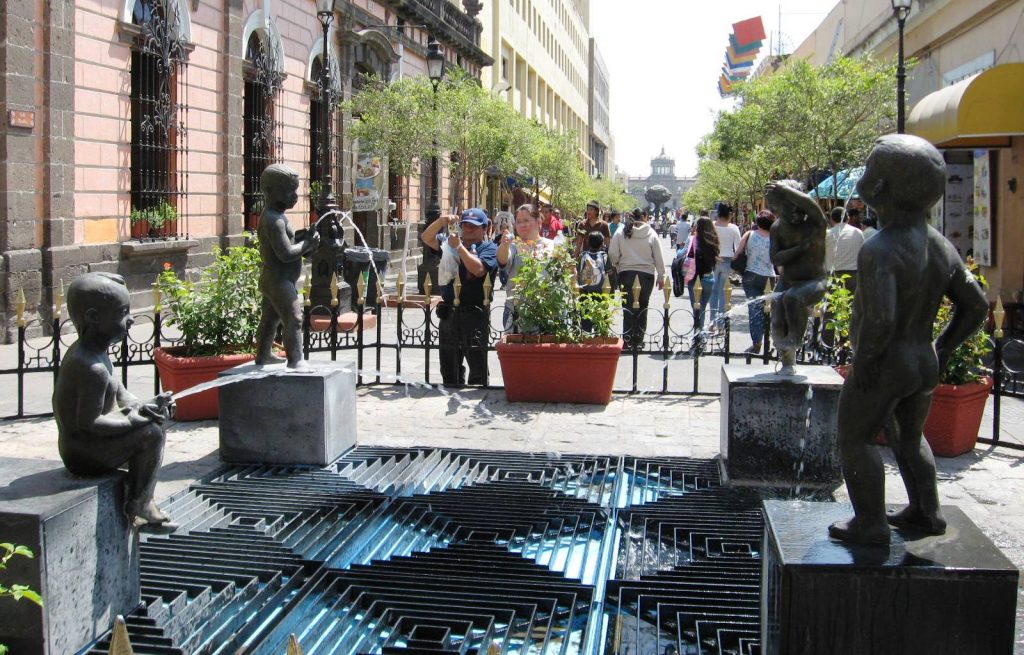 Explore Guadalajara, the capital city of the central state of Jalisco in Mexico. It’s also the second largest city in the country and considered a colonial city, although much of its architecture dates from the independence period. Despite having a far more relaxed feel than Mexico City the centre can still seem a bit stuffy and dusty, especially during rush hour when the sun is out. However, it is still a lovely city and contains many nice areas for walking, not just in the city centre.

Guadalajara has a humid subtropical climate, typical to central Mexico, and with a strong seasonal variation in precipitation.

The cofounders of Guadalajara were Doña Beatriz de Hernandez and Governor Cristobal de Oñate. In Plaza de los Fundadores there is a monument in honor of both of them.

Guadalajara and Jalisco in general were the center of the Cristero Wars (1926-1929), a rebellion by catholic guerillas against the secularizing reforms of Plutarco Calles’s presidency. One of the first armed conflicts of the rebellion took place in Gudalajara in the Church of Our Lady of Guadalupe (3 August 1926), where a group of several hundred cristeros engaged in a shootout with federal troops. Guadalajara itself was attacked (unsuccessfully) by the Cristero armies in March of 1929.

Guadalajara is one of the fastest growing metropolitan areas in the country. This growth has been driven in part by the booming electronic industry in the city’s industrial outskirts. Other important and growing industries are pharmaceuticals, food processing, and fashion.

The University of Guadalajara, often referred to simply as “U de G” (“OOO day HAY”) is Western Mexico’s most important institution of higher learning, and Mexico’s second most important after Mexico City‘s mammoth UNAM. The University also serves as a centre of cultural activity enjoyed by residents and tourists alike, such as the Ballet Folclórico and the Cineforo Universidad.

What to see. Best top attractions in Guadalajara Mexico

What to do in Guadalajara, Mexico

See a Bullfight, the Plaza de Toros (Bull ring) is located right across the road from the Estadio Jalisco on Calzada Independencia. Bullfights take place every Sunday at 4.30pm from September to Feb.

Feria Internacional del Libro (International Book Fair, known by its Spanish initials as ‘la FIL’) takes place every November in Guadalajara. Companies and delegations come from all over the world to exhibit their books and see books from other places. Every year a country or region is invited to present its books.

Festival Internacional de Cine (International Cinema Festival, every year in October. It features different movies and it runs every year under a different topic. Movies usually are shown in the Cineforo and entrance is free.

Grito de Independencia (Independece Yell) Traditional Independence day ‘grito’ or ‘yell’. Locals go to the main square and collectively shout when the clock strikes midnight. Generally the people shout ‘Viva’ and then ‘México’ or the name of an important Mexican person, for example ‘Viva Hidalgo’, etc.

Las Posadas (The Inns) Traditional Mexican Christmas practice, recreating the passage of Joseph and Mary through Bethlehem, asking for shelter and being refused. Generally nowadays this is a celebration for family and friends, but if you know a Mexican, it’s a great way to experience first-hand Mexican culture. Regular appearances include Piñatas, Mariachi bands, Mexican beer, Tequila and much merriment.

Tianguis (Street Markets), Typical Mexican place to buy goods and cheaper than other locations. There are a number of them in Guadalajara.

Tianguis el Baratillo, Huge tianguis which meets northeast of the centre, contains everything from electronics to old coins to dog toys to animals to DVDs and many more things besids.

Tianguis Chapultepec runs daily beginning in mid-afternoon and into the evening on the boulevard in the middle of Avenida Chapultepec in Colonia Americana. Along with many things to purchase, you will be entertained by many musicians, dancers, and artists. Friday and Saturday nights are especially busy with many more options for shopping and entertainment.

Tianguis Cultural, Every Saturday from 10:30am to 4:00pm in the Plaza Benito Juarez, immediately SW of the Parque Agua Azul at the corner of 16 de Septiembre and Av Washington. Free concerts, open air chess, artists at work and an open air market draw a young crowd to this weekly celebration of alternative culture.

Plaza Galerías, Guadalajara’s biggest mall, located in the crossing of the Vallarta and Rafael Sanzio avenues. It houses Guadalajara’s biggest multiplex cinema, with 20 THX projection rooms and 4 VIP rooms. Has multi-story parking areas as well as more than 1 square kilometer of open parking space shared with a Wal-Mart and a Sam’s Club.

Plaza del Sol, located near the crossing between the López Mateos and Mariano Otero avenues. Guadalajara’s second biggest mall, it has a multi-story car park and an open layout, with big, open spaces in the middle, surrounded by hallways. The Torrena Tower, measuring 336.5 m, is under construction next to Plaza del Sol, also next to Plaza Torrena, a smaller, underground mall that can be recognized by its white concrete dome located in the crossing of the López Mateos and Mariano Otero avenues.

Plaza Patria, enclosed by the Patria, Ávila Camacho and Américas avenues. It’s a two-story mall, not as big as Plaza del Sol or other malls, but with a sizeable assortment of stores, including fashion, electronics, convenience stores and a supermarket.

Centro Magno, located between Vallarta and López Cotilla avenues. It has a big, wide, closed space in the middle, surrounded mostly by restaurants, fashion, electronics and bazaar stores, with a cinema on the top floor.

Tlaquepaque’s Old Town District displays a huge assortment of Mexican arts and crafts as well as decorative traditional and contemporary home furnishings. All product qualities ranging from the finest ceramic, glass, pewter, etc, to traditional pottery created by many of Mexico’s Great Masters is on display and for sale. Tlaquepaque is chosen by many homeowners and decorators to furnish and decorate their homes, restaurants or hotels.

Plaza Mexico it is located seven blocks west of the Plaza Galería del Calzado. Av. México 3300, it is an older shopping mall that offers about 120 stores. However many merchants are leaving. It is open daily from 10-8.

Galeria del Calzado located in Av. México Av. 3225 is an entire mall that contains over 60 shoe stores. This is a good store for anybody that is obsessed and dedicated with buying shoes. The prices and style vary. The store is opened from Monday through Saturday from 11 a.m. to 9 p.m. and Sunday from 11 a.m. to 8:30 p.m.

Birria, tortas ahogadas, and chilaquiles are some of the most traditional dishes in Guadalajara. The food court in the Mercado Libertad is good place to sample the variety of local specialties.

Birria Birria is a savory stew made of roast chilies, spices and traditionally goat, though you will usually be given other meat options like mutton or beef depending on the restaurant. For Birria, the restaurants in the Nueve Esquinas area (a few blocks South of Templo San Francisco) are quite popular (and quite good).

Tortas ahogadas these are subs on bolillo bread drowned in a savory chile and tomato sauce. Numerous restaurants in the Centro Historico specialize in these.

Pozole A hearty soup of pork and hominy topped with fresh cabbage, radish, onion and cilantro. There are some very good pozole stands in the food court of the Mercado Libertad.

Mollete is a popular local breakfast food. A French style roll split and covered with refried beans then topped with ham or chorizo and cheese and toasted.

Tamales consists of a masa mix made of maseca which is corn based dough and in it contains mole which is red or green salsa and the choice of chicken or pork. Most people make tamales for holidays such as Christmas, the Day of the Dead, Mexican Independence Day, or New Years.

Enchiladas are a corn or flour tortilla rolled around and filled with meat, cheese, vegetables and/or potatoes and covered with chili pepper sauce. On top of the enchiladas it may have sour cream and cheese depending on what you may like on it.

If you miss American fast food, then you’re in luck. Guadalajara has 14 McDonald’s outlets.

Different types of bars are pretty easy to find. There are many more youth-oriented places, along with others, near the Teatro Degollado (Opera House). Nice area. The Americas Area also features a lot of Bars. Another Area is the centre of Zapopan, were you have almost 12 bars next to each other. Search out a bar with large collection of Tequilas and taste a greate blanca, reposada and añejo. If you ask for tequila from Los Altos that is traditional, you will almost certainly get something good. Los Altos is the region NE of GDL where the best tequila is made and it brings up images of tradition, patriotism and individualism.

Never carry illegal substances with you; Mexican police are very strict regarding these cases.

Tequila – great for tequila tasting experience. Drive or take a bus. The trip is about 1.5 hrs each way. It is beautiful countryside. For a memorable weekend day trip, take the Tequila Express — it’s a fun atmosphere with tequila shots and roving mariachis crooning you all the way to Tequila. The train leaves Saturday and Sunday mornings at 10am from the Guadalajara train station, returning the same evening. Jose Cuervo distillery has a packaged tour that will pick you from your hotel, take you to an agave farm, then to the distillery, show you around the distillery, give you samples, take you to their galleria and offer a free margarita and 10% off at a restaurant. The city is quaint and worth exploring.

Lake Chapala, the main regional vacation spot with picturesque towns like Chapala and Ajijic (the latter of which has a sizeable gringo expat community).

Guachimontones is a prehispanic (300 BCE – 900 CE) archaeological site near the town of Teuchitlán about an hour west of Guadalajara known for its unique circular stepped pyramids. This 100-plus acre complex was only discovered in the 1970s.

Tapalpa a great mountain town near Cd Guzman, offers hotel and cabana like rooms for a nice weekend retreat

Watch a video about Guadalajara