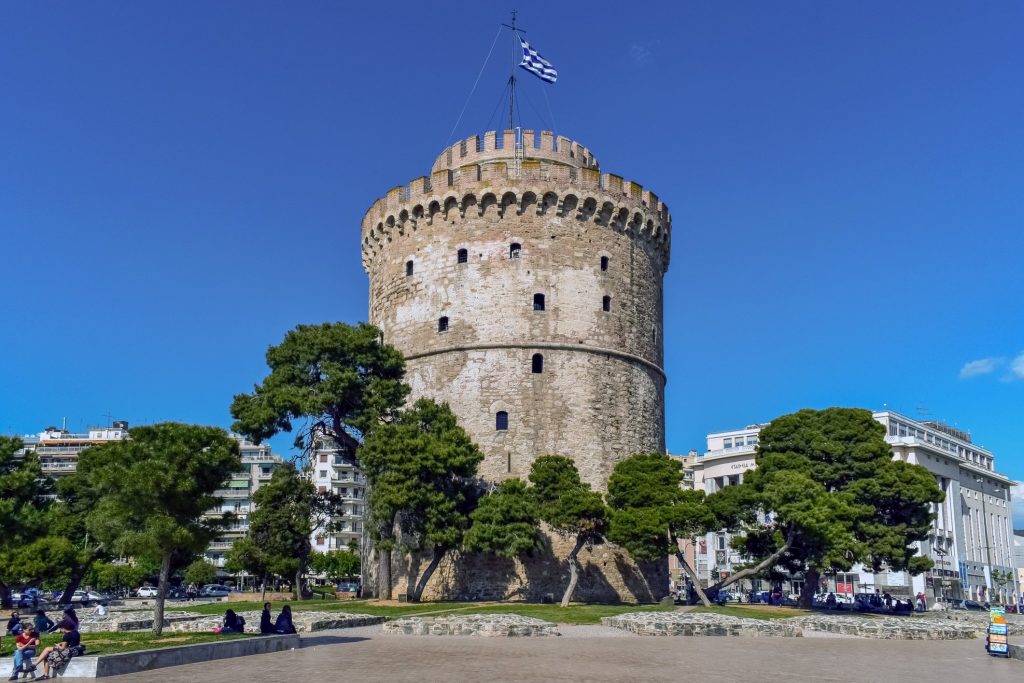 Explore Thessaloniki (520 km. north of Athens) the second largest city of Greece and the most important center of the area. Built near the sea it is a modern metropolis bearing the marks of its stormy history and its cosmopolitan character, which give it a special beauty and charm.

At about a million inhabitants, it is considered Greece’s cultural capital, renowned for its festivals, events and vibrant cultural life in general and has recently been ranked  as the world’s fifth-best party city worldwide. More importantly, it is also a city with a continuous 3,000 year old history; preserving relics of its Roman, Byzantine, Ottoman past and of its formerly dominant Jewish population. Many of its Byzantine churches, and a whole district of the city in particular, are included in UNESCO’s World Heritage list.

Take a tour in the center of Thessaloniki and plan to visit its nearby  destinations. Also, while being in Thessaloniki it is worth going up to Halkidiki.

What to See. Best top attractions in Thessaloniki Greece.
The northernmost Byzantine walls of the city and parts of the western walls are still standing, as is the city’s symbol – the White Tower, one of the 16th Century. AD fortified towers – which is the only surviving tower on the seafront. The rest of the walls are in the picturesque Upper Town which offers a spectacular view over the bay, especially in the late afternoon. Take a walk along the enormous seafront promenade (about 12 km altogether). See the the Roman Forum excavations.

The Church of Agios Demetrios
On no account should you miss the Byzantine churches built between the 5th and 14th century ACE, such as Agios Demetrios, (7th Century. ACE) and Agia Sophia (Holy Wisdome, 9th Century. ACE), and many lovely smaller ones in the upper town (St Nicolaos Orfanos is particularly worth a look for its frescoes (open Tue-Sun 8.30am-3pm)), which are on the UNESCO World Heritage List. One of them, the Rotunda, started life as a Roman temple of Zeus, built by ceasar Galerius, and is almost as old as the Pantheon in Rome. Next to the Rotunda, see the Arch of Triumph of Galerius and the ruins of his palace.

The Agia Sofia church
The city is also known as “the mother of Israel”, due to the once flourishing Jewish community here, which existed from the Roman period and grew substantially after the Ottoman Empire took in Jewish refugees expelled from Spain, Portugal, and Spanish territories in Italy; these Jews are known as “Sephardim”. Sephardic Jews formed a significant percentage of the city’s population and infrastructure until World War II, when, in spring 1943, almost all were deported by the Nazis to the extermination camp at Auschwitz, never to return. However, there are still two Synagogues, and you can see the Jewish Museum.

Aristotelous Square-the biggest of the city-and the promenade with its cafes and restaurants.

The Archaeological Museum of Thessaloniki was established in 1962 and houses some of the most important ancient Macedonian artifacts, including an extensive collection of golden artwork from the royal palaces of Aigai and Pella. It also houses exhibits from Macedon’s prehistoric past, dating from the Neolithic to the Bronze age. Adults €6, children free.

Other museums of the city include the Thessaloniki Science Center and Technology Museum, in southeast Thessaloniki and is one of the most high-tech museums in Greece and southeastern Europe and the Atatürk Museum the historic house where Mustafa Kemal Atatürk, founder of modern-day Turkey, was born.

Thessaloniki Archaeological Museum. Andronikou street 6. Covers the history of Macedon from prehistory to Roman times.
Museum of Byzantine Culture. Stratou avenue 2. Award-winning museum (2005 – best Museum of Europe).
Museum at the White Tower Located inside the city’s most famous landmark on the waterfront.
Thessaloniki Science Center and Technology Museum. Located in the city’s southeast suburbs, it houses a 150-seat digital planetarium, a 300-seat Cosmotheatre with the largest flat screen in Greece, a 200-seat amphitheater, as well as a motion simulator theater with three platforms, 3-D projection rgearding items exhibited.
Atatürk House. Agiou Dimitriou avenue. The house were Kemal Ataturk, founder of modern-day Turkey, was born.
Macedonian Museum of Contemporary Art. Upper side of the Fairground at Egnatia st 154

What to Do
The city has always been known between Greeks for its vibrant city culture, including having the most cafe’s and bars per-capita than any other city in Europe (see: Drink); and as having some of the best nightlife and entertainment in the country, thanks to its large young population and multicultural feel. Trendy bars are scattered throughout the city and cater for all tastes, with many located on pedestrianized streets or along the coast, with sea views; while daily happenings and events take place throughout the city everyday.

Thessaloniki is also known for its picturesque uninterrupted promenade/waterfront, spanning for about 4.5 km from the old port to the Thessaloniki Concert Hall. From the White Tower, the waterfront gets considerably bigger (called Nea Paralia) and along with the seaside walk, features 13 thematic gardens. During summer it is full of Thessalonians enjoying their long evening walks (referred to as “the volta” and is embedded into the culture of the city). There you will find people selling all kinds of food, bike riding, skating, fishing and a generally lively atmosphere with font the Thermaic Gulf and the port.

There is a free walking city tour at 18.30 starting in front of the rotunda. You will get detailed yet short explanations about the history, myths, architecture and lifestyle of the city as well as a few recommendations about hidden but noteworthy shops – and maybe a free cookie.

Yachting
The Thermaic Gulf is a challenging place for yachting and sailing. Many days there are strong North winds but with low waves, making sailing a fun and joy for all sailors. There are three sailing clubs in Thessaloniki and world championships take place in the city every year. Thessaloniki has several marinas, most notably in Kalamaria, southeast of the city center, while a new one is proposed to be constructed right at the city center that will contain 182 mooring places. There are also many Yacht charter companies renting sailing yachts.

Thessaloniki, with its host of Byzantine monuments (due to its significance during the Byzantine period), justifiably is considered an open-air museum of Byzantine art. Wondering through the city, it is worthwhile to see:

Discover neighborhoods’ and focal points in the city

Other monuments and buildings in the city:

What to Drink
Thessaloniki has a very active nightlife scene and only recently it is starting to become exposed internationally, with Lonely Planet listing Thessaloniki as the world’s fifth-best “ultimate party city”.

Cafe-bars are scattered throughout the entire city, which create a lively atmosphere everywhere you step and you can have a drink whenever you want, while trendy bars line up along Thessaloniki’s entire waterfront from the old port, along Nikis avenue and down to “Krini”, a southeast coastal district of the city.

Thessaloniki also offers a wide variety of nightlife, from small to huge nightclubs with dance music, bars dedicated to rock music, jazz clubs and Bouzoukia, where you can experience Greek music and dancing. Large entertainment venues of the city include Pyli Axiou and Mamounia, at Vilka (which are housed in converted old factories). During summer, one can also find beach bars with lively music and serving drinks throughout the whole day and night, located at the city’s southeast suburbs. The city’s most known nightlife district is “Ladadika”, there together with the many tavernas and restaurants, you will find the most known nightclubs and bars housed in old warehouses next to the port, while in the area around the Kamara (the Arch of Galerius) is home to many cheaper cafe’s and bars, popular with the city’s student population. Areas were most of Thessaloniki’s nightlife is located at are listed below.

Get out
Thessaloniki’s proximity to places such as the national parks of Pieria and beaches of Chalkidiki often allow its residents and visitors to the city to easily have access to some of the best outdoor recreation in Europe. Some classic trips out of Thessaloniki include:

Any visit to the 500 km of wonderful beaches, on the two first fingers of Chalkidiki peninsula, where many Thessalonians (and tourists) spend their holidays there (The third finger is the monastic community of Mount Athos). In the summer, the Armenistis campground on the Sithonia peninsula stages concerts and other events. You can also check out the jazz and classical concerts that take place during summer at Sani (Kassandra peninsula). Try to schedule your visit during summer so that you’re not driving back to the city on Sunday evening, when you will always find heavy traffic from people returning back into the city.

Mount Olympus coast, towards Platamonas, a very scenic region which has fallen out of favour with the trendy set but has lost no business – it is now mainly catering to tourists from Eastern Europe.
Olympos National Park includes Mount Olympus with a chain of nice mounts to hike and several valleys. 4 refuges available to sleep, several peaks from 2500 to 3100 meters to climb.

Vergina, the spectacular site of the Macedonian royal tombs and first capital of ancient Macedon.

Olynthus, an archaeological site in Chalcidice.

Prespa and Doirani lakes near the borders with Albania and Macedonia. The national parks there offer an austere and evocative Balkan landscape and plenty of bird watching.

Watch a video about Thessaloniki 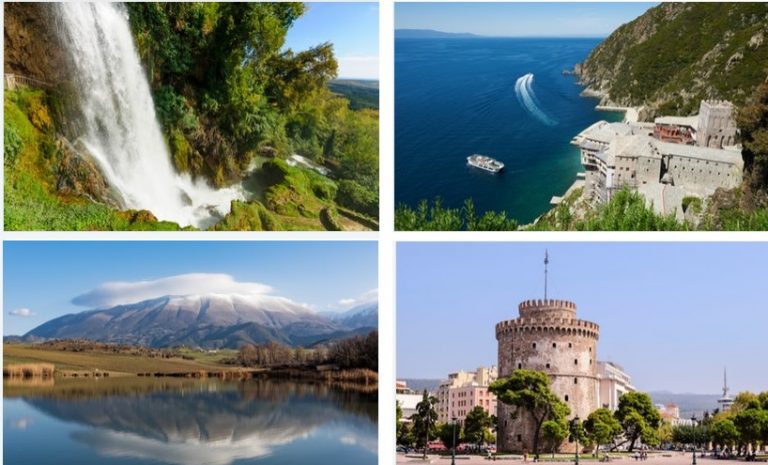