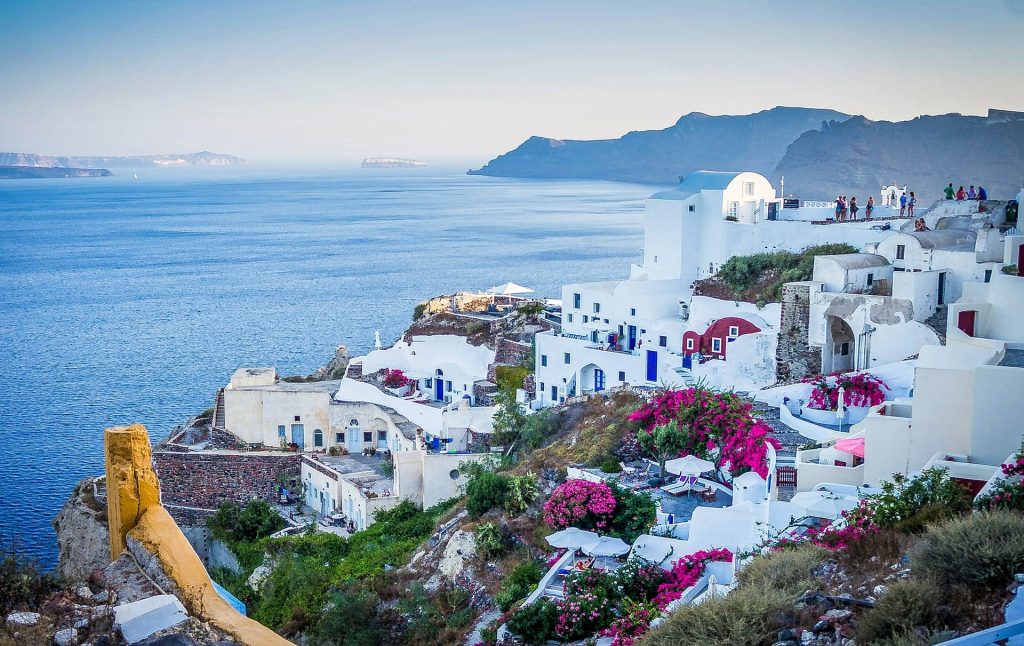 Explore Santorini, the precious gem of the Aegean, which is actually a group of islands consisting of Thíra, Thirassiá, Asproníssi, Palea and Nea Kaméni.

The whole complex of Santorini islands is still an active volcano and probably the only volcano in the world whose crater is in the sea. The islands that form Santorini came into existence as a result of intensive volcanic activity; twelve huge eruptions occurred, one every 20,000 years approximately, and each violent eruption caused the collapse of the volcano’s central part creating a large crater. The volcano, however, managed to recreate itself over and over again.

The last big eruption occurred 3,600 years ago (during the Minoan Age). The eruption destroyed the thriving local prehistoric civilization, evidence of which was found during the excavations of a settlement at Akrotíri. The solid material and gases emerging from the volcano’s interior created a huge “vacuum” underneath, causing the collapse of the central part and the creation of an enormous “pot” –today’s Caldera– with a size of 8×4 km and a depth of up to 400m below sea level.

The volcanic Caldera, the huge underwater crater formed by the eruption in the 16th century B.C., dominates the landscape.

The most recent volcanic activity on the island occurred in 1950. The whole island is actually a huge natural geological/volcano logical museum where you can observe a wide range of geological structures and forms.

Despite the growth in tourism the island has experienced, Santorini, one of the most famous islands in Greece, remains an enticing, mysterious beautiful destination.

Searching for romance Santorini is considered to be the most sought after place for a romantic getaway in Greece, since there are not many places in the world where you can enjoy exquisitely clear waters while perched on the rim of a massive active volcano in the middle of the sea. The island has a growing reputation as a wedding destination for couples not only from Greece but from all over the world. A trip to Santorini with the other half is a dream for anyone who has seen at least one photo of the island’s famous Caldera and exchanging kisses beneath Santorini’s famous sunset is the ultimate romantic experience!

Explore the island’s towns. Firá is the picturesque capital of the island; perched high up on the edge of the Caldera, it looks like a marvellous painting. Firá, together with Oia, Imerovígli and Firostefáni located high above on a cliff, make up the so-called “Caldera’s eyebrow”, the balcony of Santorini, which offers an amazing view of the volcano.

Other famous smaller villages are Akrotíri and Méssa Vounó, with their famous archaeological sites, Pýrgos, Karterádes, Emporió, Ammoúdi, Finikiá, Períssa, Perívolos, Megalohóri, Kamári, Messariá and Monólithos: some of the villages are cosmopolitan some more peaceful; they are surrounded by vast vineyards; whitewashed cliff-top towns with castles affording amazing views out over the Aegean. Soaking up the villages’ distinctive traditional atmosphere is a very rewarding experience.

A visit to Santorini is the ultimate gastronomic experience, as the island is a true culinary paradise. Treat yourself  to some famous traditional products like cherry tomatoes, white egg plants, fava, caper and “hloró tyrí”, a special kind of fresh goat cheese found on the island, or why not try some of the exceptional wines produced from grapes grown in the volcanic soil of the island. Assyrtiko, Athyri, Aidani, Mantilaria and Mavrotragano are just some of the distinctive varieties that you can taste at the island’s famous wineries (some of them operate as a museum as well) or at restaurants.

There are several villages and towns on Santorini Island, four of which are perched along the top of the crescent-shaped cliff of the caldera.

An alternative name for Santorini is Thira. Santorini is also a name for the family of islands surrounding Thira, once forming a single island prior to a major volcanic event in approximately 1628 BC

The small island cradles a rich variety of landscapes and villages. Visit traditional architecture in the small village of Mesa Gonia  containing a mixture of ruins from the 1956 earthquake and restored villas as well as a winery at the foot of the settlement. Pyrgos is another notable village set inland with its grand old houses, remains of a Venetian castle and several Byzantine churches.

The island has one natural source of fresh water, a small spring situated in a cave behind a small chapel located halfway up the steep footpath between Kamari and the entrance to Ancient Thira. This spring only provides a small quantity of water; however, it is of good quality as it comes from the only remaining limestone outcrop of the pre-volcanic island. Prior to the early 1990’s, it was necessary for water to be delivered to the island via tanker from Crete. Now most hotels and homes have access to water provided by a local desalination plant. While this water is potable, it is still rather salty, so most visitors drink bottled water while in Santorini.

Fira, Santorini 900 feet above the Old Port.
Fira is the fiery capital, a marriage of Venetian and Cycladic architecture, whose white cobblestone streets bustle with shops, tavernas, hotels and cafes, while clinging to the rim of the caldera nine hundred feet above the its port. If arriving by sea you can take a cable car up from the port or alternatively take a trip on one of the hundreds of mules up the 588 zigzagging steps. You could also attempt to walk up the steps but be warned, they are winding, narrow in parts with only low walls, they are covered in donkey excrement and the donkeys themselves will make no attempt to avoid you.

Walking north from Fira for about twenty minutes will bring you to Imerovigli, where you can take in the magnificent views of the island’s unique scenery from the tiny town.

At the northern end of the caldera is the quintessentially Santorininian town of Oia, also spelled Ia and pronounced EE-ah, with its whitewashed walls sunk into the volcanic rock and its blue domes rising above the sterling beauty of the stunning, russet Ammoudi Bay. At dusk, the town attracts crowds of people venturing to see the sunset. Santorini’s sunsets, as viewed from Oia, are reputed to be among the world’s most beautiful.

Due to the spectacular and unique natural beauty of Santorini, many Greek singers have chosen the island as the setting of their videos. Greek and Brazilian TV series have been shot of Santorini, as well as some Hollywood movies (e.g. Tomb Raider II). Generally Santorini is a pole of attraction for Greek and international celebrities.

Festivals of international importance are held every year, turning the island into a meeting point for prominent artists.

The most important is the Jazz Festival in July.

In August, the key event is the Ephestia (in English, that would be: “Volcania”) which is a series of festivities rounded off with a feast of fireworks presenting a virtual eruption of the volcano.

Santorini, the youngest volcanic land in the Eastern Mediterranean, is waiting for you.  You can reach it by plane or by ship. Don’t think twice. Experience for yourself the once-in-a-lifetime romance and charm of this pearl of the Aegean.

Watch a video about Santorini