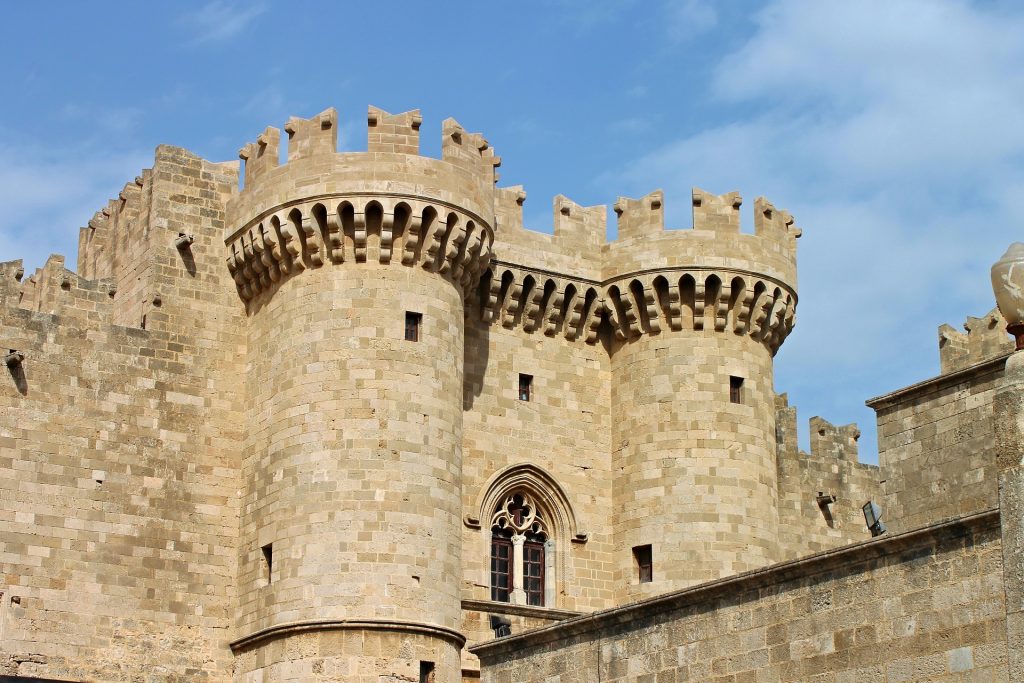 Explore Rhodes the island of the Knights. Rhodes is an island which is ideal not only for those who want to relax but also for those looking for an action-packed holiday. With its bright green hills, rich green valleys and uninterrupted line of golden beaches, Rhodes is truly a blessed place. Add the excellent tourism facilities, the island’s special blend of cosmopolitan and traditional, and numerous cultural and archaeological sites and you’ve got the perfect holiday destination.

Thanks to its strategic position, Rhodes has been important since ancient times. It soon developed into one of the most important seafaring and trading centers in the Eastern Mediterranean. When it became a province of the Roman, and later the Byzantine Empire, it initially lost its ancient glory. In 1309 the Knights of Saint John of Jerusalem conquered Rhodes. They built strong fortifications to protect the island, turning it into an important administrative center and a thriving multinational medieval city. In 1523 Rhodes was conquered by the Ottoman Turks. During the Ottoman occupation, new buildings were erected within the Old Town, mainly mosques and baths. In 1912 Rhodes was seized by the Italians. The new rulers embellished the city with magnificent buildings, wide roads and squares. The Palace of the Grand Master was rebuilt and the Street of the Knights was reconstructed in order to regain its medieval purity. It was not until 1948 that Rhodes officially became part of Greece.

Historically, Rhodes was famous worldwide for the Colossus of Rhodes one the seven wonders of the ancient world. This giant bronze statue of the Greek sun god Helios was documented as once standing at the harbor. It was completed in 280 BC and destroyed in an earthquake in 224 BC. No trace of the statue remains today.

The Old Town is one of the largest medieval towns in Europe.

It is a mosaic of different cultures and civilizations; rarely does a visitor have the chance to stroll within medieval walls and explore twenty-four centuries of history. The fascinating medieval fortress-like buildings, the bastions, walls, gates, narrow alleys, minarets, old houses, fountains, tranquil and busy squares make it feel like you have stepped back into medieval times. The Palace of the Grand Master is certainly the highlight of the Old Town. The Palace, originally a Byzantine fortress built at the end of the 7th century A.D., was converted in the early 14th century by the Knights into the residence of the Grand Master of the order and the administrative headquarters of their state; now it has been turned into a museum.

The cobblestoned Street of the Knights, one of the best preserved medieval streets in Europe, is packed with medieval inns that used to play host to the soldiers of the Order of the Knights. At the end of the Street, in the Museum Square, stands the Hospital of the Knights, which houses the Archaeological Museum. Across the square is the Church of Our Lady of the Castle, the Orthodox Cathedral of Rhodes in Byzantine times that became the Catholic Cathedral when the Knights occupied the city. Now it hosts the Byzantine Museum.

Around are many outdoor cafés, restaurants and shops. The Mosque of Suleiman the Magnificent is towards the harbor. You  must also see the “Turkish district”, where you will find the Mustafa Pasha Mosque and the 16th century “Yeni Hammam” (Turkish Baths).

Outside the walls of the Old Town is the “new” city, with its magnificent Venetian, neoclassic and modern buildings. Among the most remarkable buildings that keep the memories of the island’s Italian period alive are the Post Office, the Prefecture of the Dodecanese, Evangelismos Church (Church of the Annunciation), the Town Hall and the National Theatre.

The small marina with the Rhodian deer statues at its entrance and the surrounding windmills is an experience not to be missed. The multicultural character of Rhodes is also evident in this part of the city, since next to the Prefecture stands the Murat Reis Mosque with its elegant minaret.

Enjoy the sun and the sea at the northern tip of Rhodes town, which is lined with modern hotels. Here you will also find the beautifully renovated historic Grande Albergo delle Rose, which today operates as a Casino. A visit to the Aquarium, one of the most important marine research centers in Greece, is a must. In the underground aquarium, reminiscent of an underwater cave, the visitor can see many of the species living in the Aegean.

On the other side of the city you can visit Rodíni Park, a true paradise with many peacocks, streams and paths amidst oleander bushes, cypress, maple and pine trees. Saint Stefanos Hill (known as Monte Smith) marks the site of the Acropolis, one of the most important centers of worship, education and recreation in ancient times on Rhodes. At the top of the hill you will find the remains of the Temple of Apollo, a Hellenistic stadium and a gymnasium.

As you head down to the east coast, the main attraction is the Roman baths – a unique example of Orientalized Art Deco from 1929 – and the long sandy beach of Faliráki.

Basking in the lush green of pine trees and cypresses, on the slopes of Filérimos (meaning “lover of solitude”) Hill stands the Monastery of the Virgin Mary and the ruins of an ancient acropolis. In Byzantine times, there was a fortress on the hill which, in the 13th century, became a monastery dedicated to Holy Mary. It was beautifully restored at a later stage by the Italians and the British. Directly in front of the church there are the ruins of 3rd century temples of Zeus and Athena. Visitors can walk up the “Via Crucis”, which leads to an enormous crucifix. The view from there out over Ialissós Bay is stunning. Illuminated at night, the crucifix is clearly visible.

You can even play golf on a modern 18-hole golf course (close to Afándou beach) that is open all year round and attracts golf enthusiasts from all over the world. The area of Petaloudes (meaning Butterflies) includes the villages of Kremastí, Paradísi and Theológos. Kremastí, one of the biggest and liveliest settlements on the island, is famous for its major festival of the Virgin Mary on 15th August, while the beach of Kremastí is perfect for kitesurfing and windsurfing. However, the most fascinating and popular attraction of the region is the Valley of the Butterflies, a habitat of unique value for the reproduction of the Panaxia Quadripunctaria butterfly. Admire an atmosphere of incomparable beauty with lush vegetation and streams as you stroll along cleverly laid paths. Also well worth a visit in the Valley is the Museum of Natural History.

You must also visit

Families in Rhodes often own more than one car, along with a motorbike. Traffic jams are common particularly in the summer months as vehicles more than double while parking spots downtown and around the old town are limited and can’t cope with demand. Moreover, the island is served by 450 taxis and some 200 public and private buses adding to the traffic burden.

Watch a video about Rhodes