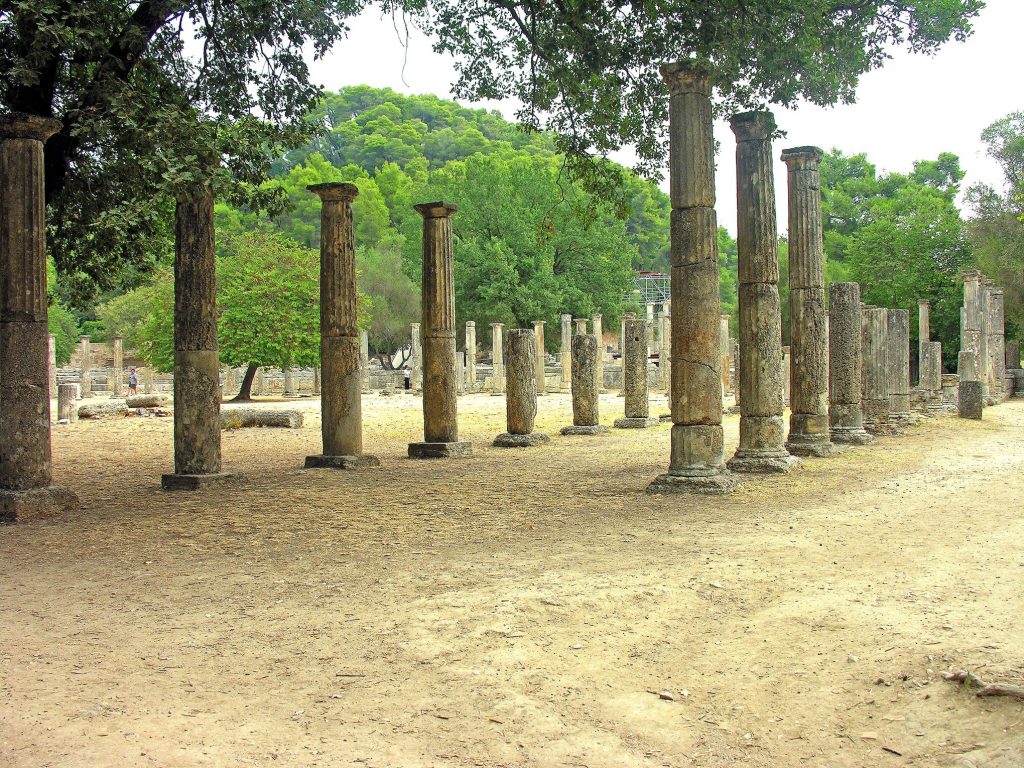 Explore Olympia  which is listed as a world heritage site and is a small town in the Peloponnese peninsula in Greece. In the “Valley of Gods” lies the most celebrated sanctuary of ancient Greece, and the birthplace of the most important athletic mega-event of all times; the Olympic Games. Olympia is one of the most well-known tourist destinations in Greece, and one of the most powerful brand names worldwide famous for the nearby archaeological site of the same name, which was a major PanHellenic religious sanctuary of ancient Greece.

Olympia is easily accessible from other areas of interest of Greece.  It is south east and less than 4 hours away from Athens. The site was primarily dedicated to Zeus and drew visitors from all over the Greek world. It consists of a somewhat disordered arrangement of buildings, the most important of which are the Temple of Hera, the Temple of Zeus with the  statue of Zeus  (a gigantic chryselephantine (ivory  and gold on a wooden frame, which was named one of the 7 wonders of the ancient world, where the largest sacrifices were made) and the Pelopion. There was still a good deal of open or wooded areas inside the sanctuary.

The Olympic Games were held every 4 years throughout Classical antiquity, from the 8th century BC to the 4th century AD.

The archaeological site held over 70 significant buildings, and ruins of many of these survive, although the main Temple of Zeus survives only as stones on the ground.

The earliest evidence of building activity on the site dates from around 600 BC with the temple of Hera. The treasuries and the Pelopion were built during the 6th century BC. The first stadium was constructed around 560 BC. It consisted of just a simple track. The stadium was remodeled around 500 BC with sloping sides for spectators and shifted slightly to the east. Over the course of the 6th century BC a range of sports were added to the Olympic festival.

During the Classical period between the 5th and 4th centuries BC, was the golden age of the site at Olympia. A wide range of new religious and secular buildings and structures were constructed.

In the late classical period, more structures were added to the site.

The late 4th century BC saw the erection of the Philippeion. Around 300 BC the largest building on the site, the Leonidaion, was constructed to house important visitors. Due to the increasing importance of the games, further athletic buildings were constructed including the Palaestra (3rd century BC), Gymnasion (2nd century BC) and bath houses (c.300 BC). Finally, in 200 BC, a vaulted archway was erected linking the entrance of the stadium to the sanctuary.

During the Roman period, the games were opened up to all citizens of the

Roman empire. A program of new buildings and extensive repairs, including to the Temple of Zeus, took place.

The 3rd century saw the site suffer heavy damage from a series of earthquakes. Invading tribes in 267 AD led to the center of the site being fortified with material robbed from its monuments. Despite the destruction, the Olympic festival continued to be held at the site until the last Olympiad in 393 AD,

Watch a video about Olympia