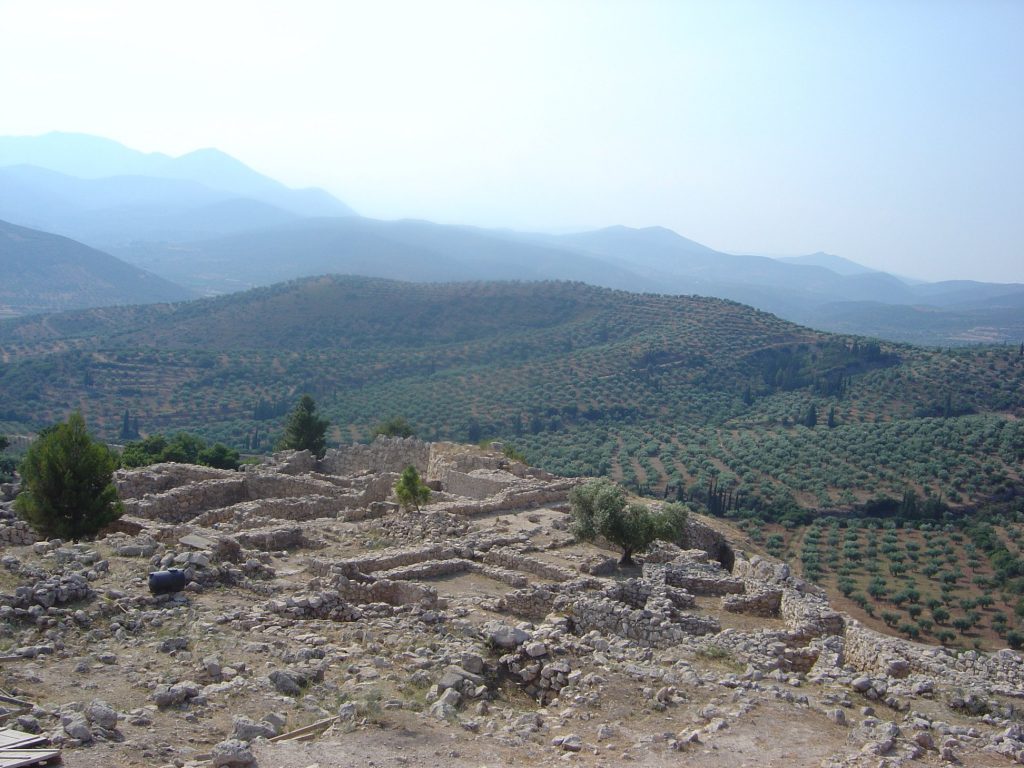 Explore Mycenae an archaeological site, on a hill 900m above sea level, near Mykines in Peloponnese. It is about 120km south from Athens.

The earliest archaeological fragments indicate that the site of Mycenae was inhabited since the 7th millennium BC, from prehistoric times. In a dominant, naturally fortified position between the tranquil sloping hills of Profitis Ilias, and Sara, with a plentiful water supply, it was an ideal place for man to settle and live a protected life.

Between 2700 and 2200 BC, there was a populous and prosperous city here. The circular building, 27 meters in diameter which dominates the hilltop, bears witness to the undeniable power of the city. The fortifications of Tiryns were completed in stages, to protect the palace complex, their places of worship and burial sites. Warehouses, workshops and houses complete the picture of a city which flourished for almost 2000 years, until the 5th century BC.

Around 1700 BC, construction began on the first monumental tomb. After this, expansion developed at a dizzying speed. Palatial complexes, Cyclopean masonry which is awe-inspiring even today, the famous “Tomb of Agamemnon”, huge arches, fountains and ramparts comprise one of the greatest architectural complexes known to the ancient world.

The apogee of the Mycenaean’s, with their majestic architecture, inscribed monuments and sophisticated civilization, occurred in the Late Bronze Age, between 1350 and 1200 BC.

The decline of Mycenae occurred around 1100 BC, possibly due to repeated damage from earthquakes and fires. They had managed, however, to have once been a truly great empire, which has indelibly stamped its reputation on the history not only of Greece, but the entire world.

The fortification of the hill of Tiryns which protects the palace complex is such an impressive construction that the ancient Greeks could not believe that it was built by human hands. Thus, the architects of Tiryns were said to be the Cyclopes. All the great heroes with supernatural powers are associated with Tiryns: Bellerophon, Perseus, and Hercules. Indeed, the construction of the wall is unbelievable and a challenge to logic, even for today’s visitors. One stands in awe in front of the perfect assembly of these huge boulders, unable to understand either how or who could have performed such a great feat of engineering.

Becoming familiar with Mycenaean civilization involves a descent into the deepest reaches of human history. Looking at Mycenae and Tiryns, one loses all sense of time. Legend and history intertwine in a dreamlike motif. The gods, already memorialized by name in the Mycenaean syllabic inscriptions, seem somehow familiar. The heroes still walk the citadel of Mycenae, guardians of a past gone.

Watch a video about Mycenae