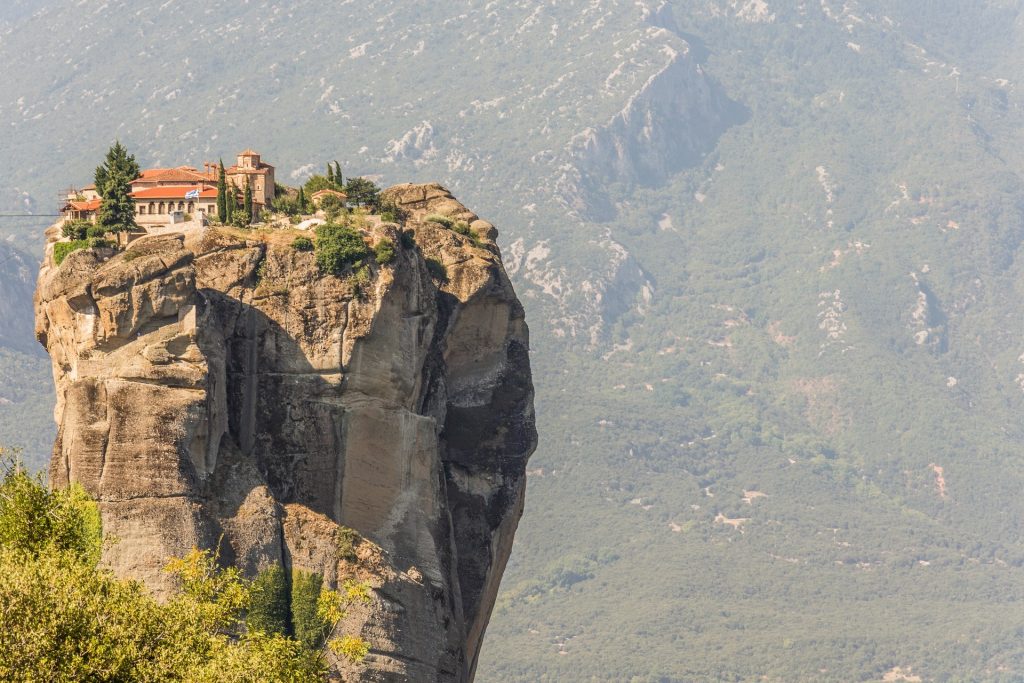 Explore Meteora the gigantic complex of over 800 dark rocks which are not only one of the most awe-inspiring corners of the planet, but also a very important place for the Orthodox Church. Spirituality and the grandeur of nature converse with each other to give the thousands of visitors from all over the world a lifetime experience.

Most of the 30 monasteries, founded in the 14th century, are now deserted. Only six of them are still open and resonate with religious traditions and the deep godliness of old times.

Meteora is included on the world heritage site.

Caves in the vicinity of Meteora were inhabited continuously between 50,000 and 5,000 years ago. The oldest known example of a man-made structure, a stone wall that blocked two-thirds of the entrance to the Theopetra cave, was constructed 23,000 years ago, probably as a barrier against cold winds. Μany Paleolithic and Neolithic artifacts have been found within the caves.

Meteora are mentioned neither in the Greek mythology nor in ancient Greek literature. The first people to inhabit Meteora after the Neolithic era were  a group of hermit monks.

They lived in hollows and fissures in the rock towers, some as high as 550m above the plain. This great height, combined with the sheerness of the cliff walls, kept away all but the most determined visitors. Initially, the hermits led a life of solitude, meeting only on Sundays and special days to worship and pray in a chapel built at the foot of a rock

As early as the 11th century, monks occupied the caverns of Meteora. However, monasteries were not built until the 14th century, when the monks sought somewhere to hide in the face of an increasing number of Turkish attacks on Greece. At this time, access to the top was via removable ladders or windlass. Nowadays, getting up is a lot simpler due to steps being carved into the rock during the 1920s’. Of the 24 monasteries, only 6 (four male, two female) are still functioning, with each housing fewer than 10 individuals.

In 1344,  Athanasios Koinovitis from Mount Athos brought a group of followers to Meteora. From 1356 to 1372, he founded the great meteoron monastery on the Broad Rock, which was perfect for the monks. They were safe from political upheaval and had complete control of the entry to the monastery.

At the end of the 14th century, the Byzantine Empire’s reign over northern Greece was being increasingly threatened by Turkish raiders who wanted control over the fertile plain of Thessaly. The hermit monks, seeking a retreat from the expanding Turkish occupation found the inaccessible rock pillars of Meteora to be an ideal refuge.

Access to the monasteries until the 17th century was originally and deliberately difficult, requiring either long ladders latched together or nets used to haul up both goods and people and they were drawn up whenever the monks felt threatened

The monasteries were created to serve monks and nuns following the teachings of the Eastern Orthodox Church. Much of the architecture of these buildings is Athonite in origin.

The monastery of Great Meteoron is the largest of the monasteries located at Meteora, though in 2015 there were only 3 monks in residence. It was erected in the mid-14th century and was the subject of restoration and embellishment projects in 1483 and 1552. One building serves as the main Folklore museum of Church Heirloom, with old copper, clay and wooden kitchen utensils for tourists. The main church, consecrated in honor of the transfiguration of Jesus was erected in the middle of the 14th century and 1387/88 and decorated in 1483 and 1552.

The monastery of Varlaam is the second largest monastery in the Meteora complex, and in 2015 had the largest number of monks (seven) of the male monasteries. It was built in 1541 and embellished in 1548. A church, dedicated to All Saints. It was built in 1541/42 and decorated in 1548. The old refectory is used as a museum while north of the church is the parekklision of the Three Bishops, built in 1627 and decorated in 1637

The monastery of St. Stephen has a small church built in the 16th century and decorated in 1545. This monastery rests on the plain rather than on a cliff. It was bombed by the Nazis during world war II who believed it was harboring insurgents and was abandoned and many art treasures were stolen. The monastery was given over to nuns in 1961 and they have reconstructed it into a flourishing nunnery, with 28 nuns in residence in 2015. The small St Stefanos church is a single-aisle basilica, built in 1350.

Agia Triada is located on a typical imposing and steep rock of Meteora, functioning since 1362. The church we see today was constructed around 1476 and it is a small cross-like double-columned church with a dome. Also very interesting is the Monastery Folklore Museum boasting a wide selection of old clothing, appliances, tools and other folklore items.

Roussanou was built in 1529 on the ruins of older constructions.

Agios Nikolaos Panausas is a multilevel, graceful and imposing Holy Monastery located near Kastraki Village. The organized monastic way of living in this monastery was established during the first decades of the 14th century. The frescos are the oldest signed paintings.

At Easter, the monasteries at Meteora guarantee you will really feel what these days are all about. Experience the awe and the ecstasy and let humbleness lead you through the mystic atmosphere to purification.

During the Holy Week, the mass starts at 19:00 and finishes around 21:00. At midnight on Easter Saturday when the resurrection is announced, the doors of the monasteries open to welcome those who want to attend the whole of the religious ritual.

Maundy Thursday is unique at the Varlaam monastery for the mass of the Last. In the eerie sounds of the bells ringing mournfully, the believers take part in the divine drama to attain a spiritual and moral elevation themselves.

On Good Friday, the Epitaphs are decorated and the scent of incense and lilac fills the atmosphere. The icons seem to weep in the pale candle light. The devout visitors of the monasteries lean their heads in humbleness and breathe in serenity in the place where time seems to stand still.

On Easter Sunday and the following days too, it is definitely worth a visit. The scent of roasted lamb intoxicates your lungs everywhere, while the Easter related dishes of paspaliáres (= pies made with corn flour and baked in clay pots) and basiordí (=pork preserved in its fat) together with endless quantities of wine double the pleasure of singing and dancing along.

Watch a video about Meteora 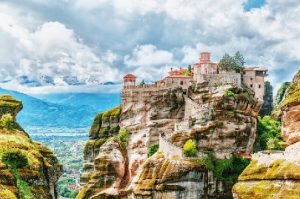